Art of South and Southeast Asia Before 1200 CE

The Indus Valley Civilization was an urban civilization from 3300–1300 BCE that covered most of present-day Pakistan and northwest India.

Draw a timeline of the Early, Mature, and Late Harappan Phases of the Indus Civilization, noting the cultural accomplishments of each

Inhabitants of the ancient Indus Valley developed new and notable techniques in handicraft, metallurgy , trade and transportation, systems of measurement, and urban planning. 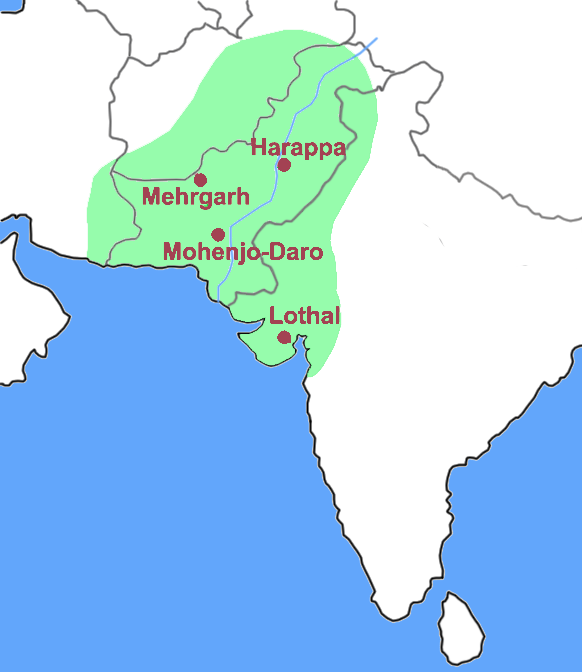 Indus Valley civilization map: This map illustrates the extent of the Indus Valley Civilization, imposed over the borders of modern-day Pakistan and northwest India.

The civilization is often separated into three phases:

The Mature Harappan phase was the cultural high point, a time by which communities had grown into well-functioning, enormous urban centers. Many more artistic artifacts—such as ceramics, sculptures, seals, and jewelry—have been excavated from this time than from some civilizations that began centuries after its decline.

Numerous architectural remains have been found as well, including multistory buildings, baths, and dockyards. To date, over 1,052 cities and settlements have been found in the general area of the rivers and their tributaries, with the major ones being Harappa, Mohenjo-Daro, Dholavira, Rupar, Lothal, and Kalibangan.

The cities of the ancient Indus Valley consisted of highly functional, multistory buildings and structures constructed with uniform, kiln-burnt bricks. There is evidence of urban planning due to the uniformity of size and the style of the brickwork, as well as the organization of streets and neighborhoods into grid patterns, much like many current cities.

The first-known sanitation system, whereby waste-water was directed into covered drains that lined major streets and where clean water was obtained from wells in a designated room in the home, was employed in the ancient Indus Valley. This system of sewage and drainage is quite remarkable and was more advanced than some seen even today.

The Indus Valley Civilization is also known for developing a unified system of weight and measurement, as well as a decimal system and the first known use of negative numbers. In 2001, it was discovered that people from the early Harappan period had knowledge of proto-dentistry with the excavation of the first evidence of drilled human teeth.

Art in the Indus Valley

The Indus Valley period is well documented through the wealth of artifacts that were excavated from its magnificent cities. It is widely believed that most of the inhabitants of Indus Valley cities were tradespeople and artisans. Archaeologists have excavated sculptures, seals, pottery, gold jewelry, elaborate beadwork, and anatomically detailed figurines in terracotta , ceramic, bronze, lead, tin, and steatite from the ancient Indus Valley area.

A number of bronze, gold, stone, and terracotta figures of girls in dance poses reveal the presence of some dance forms from the time, and a harp-like instrument depicted on a seal indicates the use of stringed musical instruments.

Similarities in the iconography and construction of excavated artifacts suggest the considerable mobility and trade networks of the Indus Valley inhabitants. Raw materials found only in distant regions, such as lapis lazuli and steatite, were imported for artistic use. It is believed that the trade networks of the Indus Valley reached as far as Afghanistan, coastal Persia, northern and western India, Mesopotamia , and Egypt. 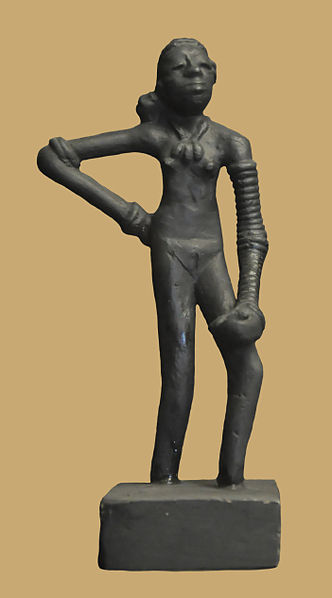 Dancing Girl of Mohenjo-daro: A small, 4500-year-old bronze statuette of a dancing girl that was excavated in Mohenjo-daro in 1926.

The iconography of the artifacts from the Indus Valley region often depict quite anatomically correct animals and human figures. Similar to other civilizations of the same time period, such as Ancient Egypt and Mesopotamia, there are many depictions of female figures, or possibly fertility goddesses.

One motif shows a horned figure seated in a posture reminiscent of the lotus position and surrounded by animals; this was named Pashaputi (lord of cattle) by excavators. Between 400 and 600 distinct Indus symbols that indicate a language have been found on ceramics, seals, and tablets, though the language remains entirely unknown to this day. 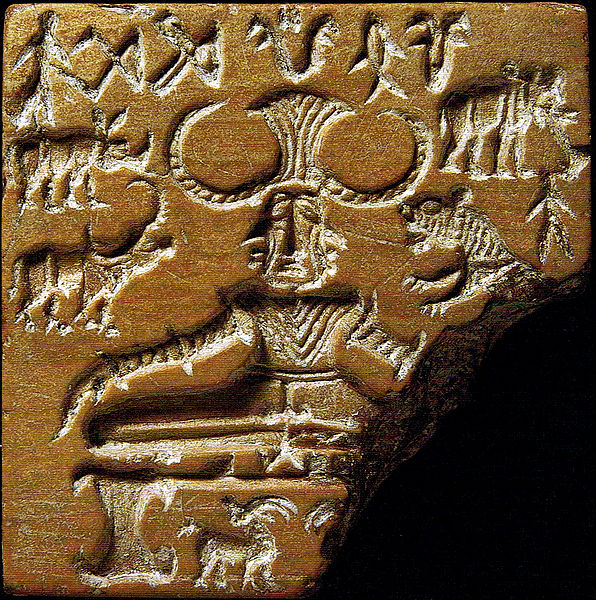 Pashupati: Discovered at Mohenjo-daro, this seal depicts a seated, horned figure surrounded by animals, who is commonly interpreted to be Pashupati, the Lord of Cattle.

Socially, the Indus Civilization appears to have been relatively egalitarian in nature. All homes within its various cities had access to water and drainage facilities and were generally equal in size. The evidence for planned settlements and the uniformity of Harappan artifacts suggests a strong organizational or governing force in the Indus Valley Civilization, though archaeological records provide no immediate answers.

Around 1800 BCE, signs of decline began to emerge in the Indus River Valley. By 1700 BCE, many of the cities had been abandoned. The reason for the decline of the civilization is unknown, but it is theorized to be due to enemy invasion throughout the area, a change in climate to significantly cooler and drier conditions, or the disappearance of the Ghaggar-Hakra River. After the collapse, regional cultures emerged that continued to show the influence of the Indus Valley Civilization to varying degrees.

The Vedic period in India (c. 1700–500 BCE) is marked by the composition of the Vedas, the oldest scriptures of Hinduism.

The Vedic period (or Vedic age) in India was a period in history during which the Vedas, the oldest scriptures of Hinduism, were composed. The time span of the period is uncertain, though it is thought to span from 1700 BCE to about 500 BCE, with 150 BCE suggested as a terminus ante quem (the latest possible time) for all Vedic Sanskrit literature. The transmission of stories in the Vedic period was by oral tradition alone, and a literary tradition began only in post-Vedic times.

The associated culture, sometimes referred to as the Vedic civilization, was probably centered in the northern and northwestern parts of the Indian subcontinent, but it has now spread and constitutes the basis of contemporary Indian culture. In the 11th century BCE, the Vedic society transitioned from semi-nomadic life to settled agriculture.

This transition led to an increase in trade and increased competition and conflicts over resources, such as land and water. However, after 1000 BCE, the use of iron axes and ploughs enabled the clearing of jungles, and the Vedic kingdoms were able to expand along the Gangetic plains, ushering in the later Vedic age. 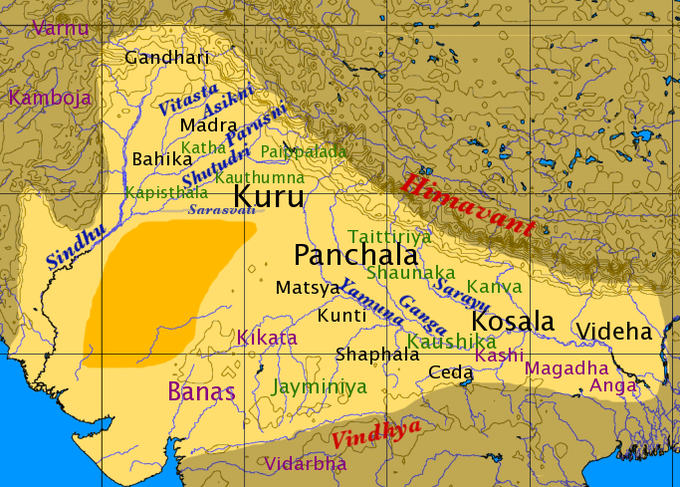 Map of northen India in the later Vedic Period: The Vedic civilization is thought to have been centered in the northern and northwestern parts of the Indian subcontinent. Here, the river Indus is shown by its Sanskrit name Sindhu. The location of Vedic shakhas is labelled in green, and the Thar desert is in orange.

By the 6th century BCE, various political units consolidated into large kingdoms called Mahajanapadas. The process of urbanization began in these kingdoms, and commerce and travel—even over regions separated by large distances—became easy.

The end of Vedic India is marked by linguistic, cultural, and political changes. The grammar of Pāini marks a final apex in the codification of Sutra texts and, at the same time, the beginning of Classical Sanskrit. The invasion of Darius I of the Indus valley in the early 6th century BCE marks the beginning of outside influence that continued in the kingdoms of the Indo–Greeks. After the end of the Vedic period, the Mahajanapadas period in turn gave way to the Maurya Empire (from c. 320 BCE), which is considered to be the golden age of classical Sanskrit literature.

Crafts in the Vedic Period

Crafts within Vedic culture include that of chariot-making, cart-making, carpentry, metal-working (creating instruments such as razors, bangles, and axes), tanning, bow-making, sewing, weaving, and making mats from grass and reeds. Many of these might have required full-time specialists.

The use of iron implements (krishna-ayas or shyama-ayas, literally meaning black metal or dark metal) increased in the later Vedic age, as did new crafts and occupations such as leather work, pottery, astrology, jewelry, dying, and vintnery. Apart from copper, bronze , and gold, later Vedic texts also mention tin, lead, and silver.

The black- and red-ware culture (BRW) is an early, Iron Age culture associated with the post-Rigvedic Vedic civilization that dates roughly from the 12th  to 9th centuries BCE. It was succeeded by the painted grey-ware culture (PGW), an Iron Age culture that corresponds to the later Vedic period and that lasted from roughly 1200 BCE to 600 BCE.

Goblet from Navdatoli, Malwa: An example of pottery work from the black- and red-ware culture (BRW), an early, Iron Age culture associated with the post-Rigvedic Vedic civilization.

The Vedas are a large body of texts that originated in the Vedic period. Composed in Vedic Sanskrit, the texts constitute the oldest layer of Sanskrit literature and the oldest scriptures of Hinduism.

The reconstruction of the history of Vedic India is based on text-internal details. Linguistically, the Vedic texts could be classified in five chronological strata:

The Upanishads are a collection of philosophical texts that form the theoretical basis for the Hindu religion. The Sanskrit term upanishad means sitting down near, implying sitting near a teacher to receive instruction.

Also known as Vedanta, they are considered by orthodox Hindus to contain the revealed truths (Sruti) concerning the nature of ultimate reality (brahman), and describe the character and form of human salvation (moksha).

All Upanishads are associated with one of the four Vedas—Rigveda, Samaveda, Yajurveda, and Atharvaveda—and have been passed down in oral tradition. More than 200 Upanishads are known, and with the Bhagavad Gita and the Brahmasutra, the Mukhya Upanishads provide a foundation for several later schools of Indian philosophy. 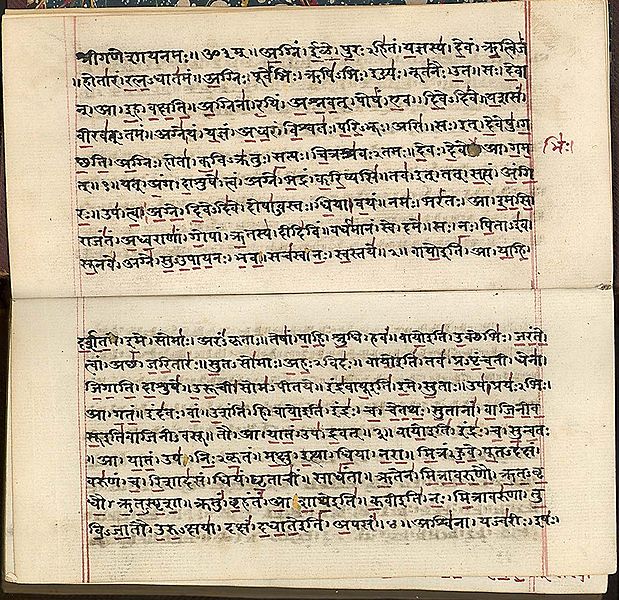 Rigveda in Sanskrit on paper: The Rigveda text is the oldest of the Vedas, thought to have been composed roughly between 1700 and 1100 BCE.

The Maurya Dynasty was an extensive empire that occupied all of northwestern India from 321–185 BCE.

Describe the Barabar Caves, the Pillars of Ashoka, and other examples of architecture and art of the Maurya dynasty

The Maurya Empire was a powerful Iron Age empire in ancient India ruled by the Maurya Dynasty from 321 to 185 BCE. Founded by Chandragupta Maurya, who overthrew the previous Nanda Dynasty, the empire had fully occupied Northwestern India by 320 BCE.

With an area of 5 million square kilometers and a population of 50 to 60 million, it was the first time in history that the subcontinent was united under a single government. The second emperor of the Maurya Dynasty was the son of Chandragupta, who expanded the empire further but never achieved the same level of notoriety as his own son, Ashoka.

From Hinduism to Buddhism

After the Kalinga war (262–261 BCE), Ashoka converted from Hinduism to Buddhism. He preached non-violence and religious acceptance, and he laid a foundation for social harmony and religious transformation across all of India.

The Pillars of Ashoka

Pillar of Ashoka at Lumbini: The most widespread example of Mauryan architecture that exists today are the Pillars of Ashoka, which are often exquisitely decorated. There are more than 40 pillars spread throughout the Indian subcontinent.

The Barabar Caves and Other Temples

The Barabar Caves are the earliest example of Buddhist rock-cut architecture and were built during the Mauryan period. Attributed to Emperor Ashoka, the caves consist of temples, stupas, and monasteries that are carved elaborately out of granite. The decorated facade of the Lomas Rishi grotto, an offering to the Buddhist sect of the Ajivikas, is a good example of the high degree of craftsmanship. 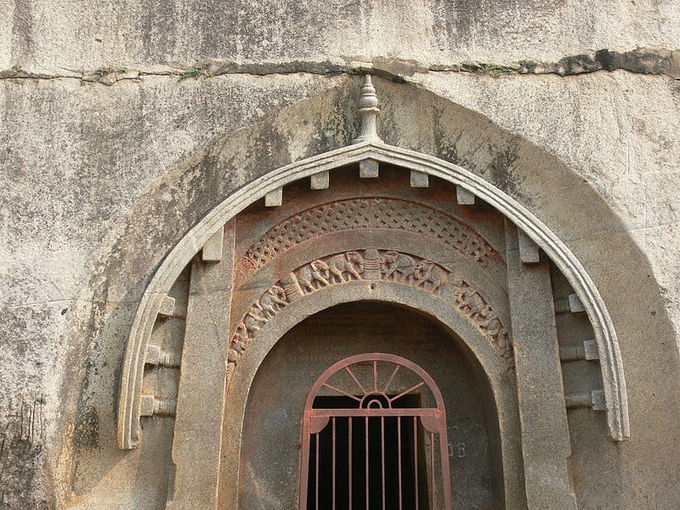 Barabar Caves: Built in the third century BCE during the Mauryan period, these are the oldest examples of Buddhist rock-cut architecture.

In addition, Ashoka was responsible for erecting several thousand Buddhist temples and stupas across India, such as the Mahabodhi temple. Another famous example includes the Great Stupas at Sanchi, whose gates are lavishly decorated with lions, elephants, figures of fertility, and images from the Jakata tales. Ashoka’s patronage of the Buddhist religion greatly influenced the visual iconography of time. 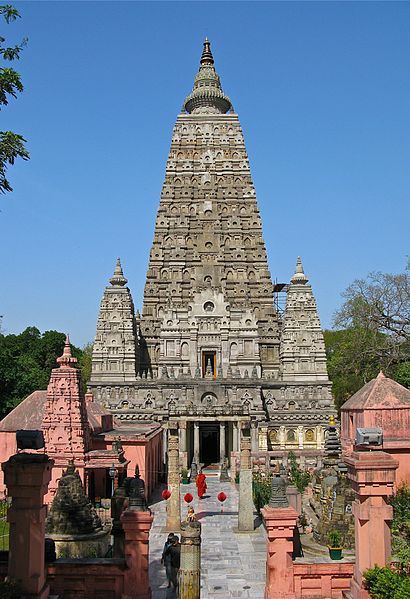