Italian Gothic painting developed a distinctively western character and flourished from the second half of the 13th century onward.

The transition from the Romanesque to the Gothic style of painting happened quite slowly in Italy, several decades after it had first taken hold in France. After the conquest of Constantinople in 1204 during the Fourth Crusade , the influx of Byzantine paintings and mosaics increased greatly. This was partly the reason that Italy was strongly influenced by Byzantine art, especially in painting.

The initial changes to the Byzantine-inspired Romanesque style were quite small, marked merely by an increase in Gothic ornamental detailing rather than a dramatic difference in the style of figures and compositions. Italian Gothic painting began to flourish in its own right around the second half of the 13th century with the contributions of Cimabue of Florence (ca. 1240–c a. 1302) and Duccio of Siena (ca. 1255–60–ca. 1318–19), and developed an even more strongly realistic character under Giotto (1266–1337).

Cimabue and Duccio were trained in the Byzantine style, but they were the first great Italian painters to start breaking away from the Italo-Byzantine art form. In a period when scenes and forms were still relatively flat and stylized , Cimabue was a pioneer in the move towards naturalism in Italian painting. His figures were depicted with more lifelike proportions and shading, as evident in the Crucifixion scene for the church of Santa Croce in Florence (1287-88), which demonstrates delicately shaded draperies and the chiaroscuro technique. His Maestà di Santa Trinita, a Madonna and Child painting commissioned by the church of Santa Trinita in Florence between 1290 and 1300, makes use of perspective in portraying Mary’s three-dimensional throne, and depicts the figures with sweeter and more natural expressions than typical in the somber Romanesque style. 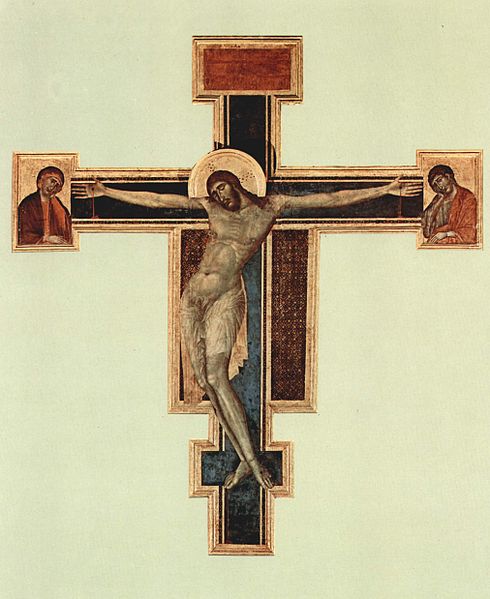 Crucifixion of Santa Croce (Tempera on Wood): The figure of Christ slumps heavily to one side and is clad in delicate, folded drapery in Cimabue’s Crucifixion.

Much like Cimabue, Duccio of Siena painted in the Byzantine style but made his own personal contributions in the Gothic style in the linearity, the rich but delicate detail, and the warm and refined colors of his work. He was also one of the first Italian painters to place figures in architectural settings. Over time, he achieved greater naturalism and softness in his work and made use of foreshortening and chiaroscuro techniques. His characters are surprisingly expressive and human, interacting tenderly with each other. Duccio is considered the founder of the Sienese Gothic school of painting.

Maestà del Duomo di Siena (Tempera and Gold on Wood): The Maestà of the Siena Cathedral is a painted altarpiece composed of many individual paintings. It was commissioned in 1308 by the city of Siena and is widely regarded as Duccio’s masterpiece.

Both Cimabue and Duccio were probably influenced by Giotto in their later years. Giotto was renowned for his distinctively western style, basing his compositions not on a Byzantine tradition but, rather, on his observation of life. His figures were solidly three-dimensional, had discernible anatomy, and were clothed with garments that appear to have weight and structure. His greatest contribution to Italian Gothic art was his intense depiction of a range of emotions, which his contemporaries began to emulate enthusiastically. While painting in the Gothic style, he is considered the herald of the Renaissance .

During the 14th century, Tuscan painting was predominantly accomplished in the International Gothic style, which was prevalent throughout Western Europe at the time. In its fully developed form, it is best seen in the work of Simone Martini of Siena (1284–1344) and Gentile da Fabriano (1370–1427), whose paintings are characterized by a formalized sweetness and grace, an elegance and richness of detail, and an idealized quality that was missing in Giotto’s stark work. The tempera altarpieces of Fra Angelico bridge the gap between the International Gothic and Renaissance styles of painting, making use of Gothic elaboration, gold leaf , and brilliant color.