Gothic art existed as monumental religious sculpture in churches, such as in the Cologne Cathedral, and as small, portable sculptures.

Explain how the art of the Cologne Cathedral embodies Gothic sculpture

Gothic art was a style that developed concurrently with Gothic architecture during the mid-12th century. Primary media in the Gothic period included sculpture, panel painting, stained glass fresco , and illuminated manuscripts . The earliest Gothic art existed as monumental sculpture on the walls of cathedrals and abbeys . Elaborate sculpture was used extensively to decorate the facades of these buildings. 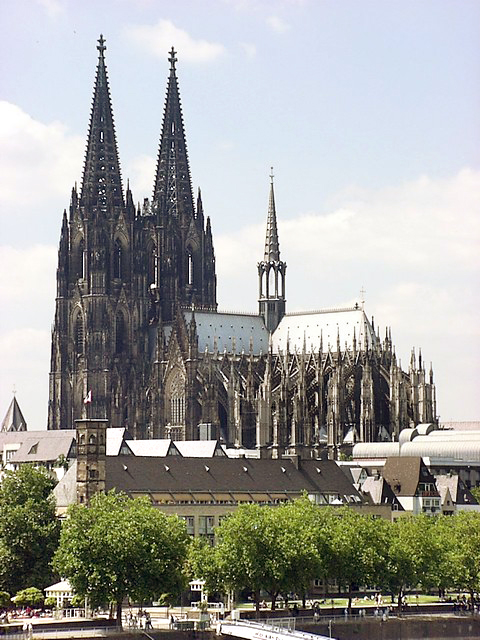 One of the important works in the cathedral is the High Altar, installed in 1322. It is constructed out of black marble, with a solid slab 15 feet long forming the top. The front and sides are overlaid with white marble, nine inches into which figure are set, with the Coronation of the Virgin at the centre.

The most renowned work of art in the cathedral is the Shrine of the Three Kings. It was commissioned by Philip von Heinsberg, archbishop of Cologne from 1167 to 1191, and created by Nicholas of Verdun. It is traditionally believed to hold the remains of the Three Magi or Three Wise Men, whose relics were acquired at the conquest of Milan in 1164. The shrine takes the form of a large reliquary in the shape of a basilican church, made of bronze and silver. It is gilded and ornamented with architectonic details, figurative sculpture, enamels, and gemstones. The entire outside of the shrine is covered with an elaborate decorative overlay. There are 74 high relief figures in silver gilt in all, not counting smaller additional figures in the background decoration. On the sides, images of the prophets decorate the lower sections, while images of the apostles and evangelists decorate the upper part. On one end, there are (across the bottom, from left to right) images of the Adoration of the Magi, Mary enthroned with the infant Jesus, and the baptism of Christ. Above, one may see Christ enthroned at the Last Judgment. The opposite end shows scenes of the Passion: the scourging of Christ (lower left), and his crucifixion (lower left), with the resurrected Christ above. The figures, with their fully modeled bodies and wet drapery , demonstrate how sculptors in the Gothic period were familiar with classical references and were able to employ them in their works. 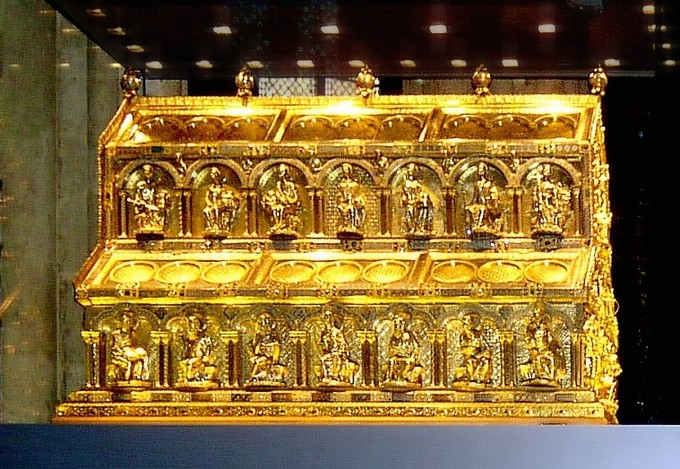 Near the sacristy is the Gero-Kreuz, a large crucifix carved in oak with restored paint and gilding. It is the oldest large crucifix north of the Alps, as well as the oldest known free standing Northern sculpture of the medieval period. 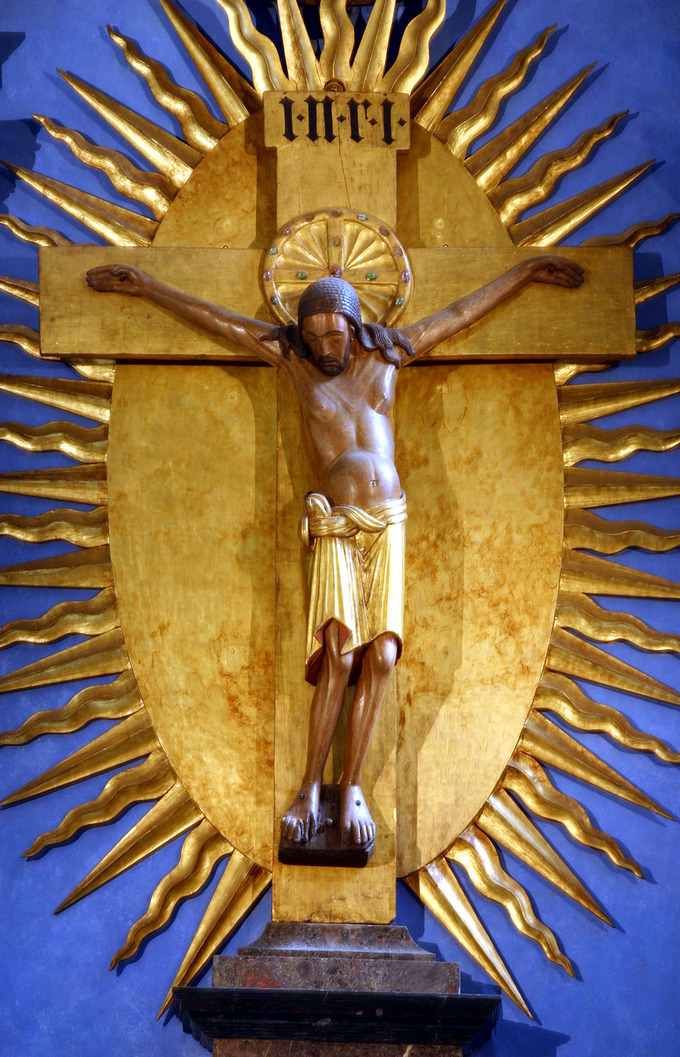 The Gero-Kreuz: The Gero-Kreuz is the oldest large sculpture of the crucified Christ north of the Alps and is located in the Cologne Cathedral.

Aside from monumental sculpture, smaller, portable sculptural pieces were also popular during the Gothic period. Small carvings, made generally for the lay market, became a considerable industry in urban centers. Gothic sculptures independent of architectural ornament were primarily created as devotional objects for the home or intended as donations for local churches. Nevertheless, small reliefs in ivory, bone, and wood covered both religious, as well as secular subjects, and were for church and domestic use. Such sculptures were often the work of urban artisans. The most typical subject for three dimensional small statues is the Virgin Mary alone or with child. Additional objects typical of the time included small devotional polyptychs, single figures, especially of the Virgin Mary, mirror-cases, combs, and elaborate caskets with scenes from romances.

Nicola Pisano and his son Giovanni developed a Proto-Renaissance style of sculpture in Italy combining classical Roman and Gothic styles.

Nicola Pisano (ca. 1220–1284) and his son Giovanni Pisano (ca. 1250–1315) were Italian sculptors during the Gothic age who developed a Classical-influenced style of sculpture known as Proto-Renaissance. Their relief sculptures drew heavily from the carved Roman sarcophagus and were characterized by sophisticated and crowded compositions and a sympathetic handling of nudity. They are sometimes considered to be the first modern sculptors.

The specifics of Nicola Pisano’s origins are uncertain. He was born between 1220 and 1225 in the southern Italian region of Apulia and trained in the local workshops of the Holy Roman Emperor Frederick II. He moved to Tuscany around 1245 and was active in the cities of Lucca, Pisa, Siena, Pistoia, and Perugia. His most famous work is the pulpit of the Pisa baptistery, which is a masterful synthesis of the French Gothic style and Classical style. Made of white Carrara marble, the pulpit depicts scenes from the life of Jesus Christ in a Classical style. The figures wear tunics in a Roman fashion, and his representation of the Madonna is reminiscent of the regal bearing of goddesses in late Roman sculpture. The inspiration for the pulpit probably came from the triumphal arches in Rome. Nicola Pisano had seen the arches on his travels, particularly the Arch of Constantine, which has many features the pulpit imitates, including figures standing on top of columns and an attic storey with sculpted scenes. 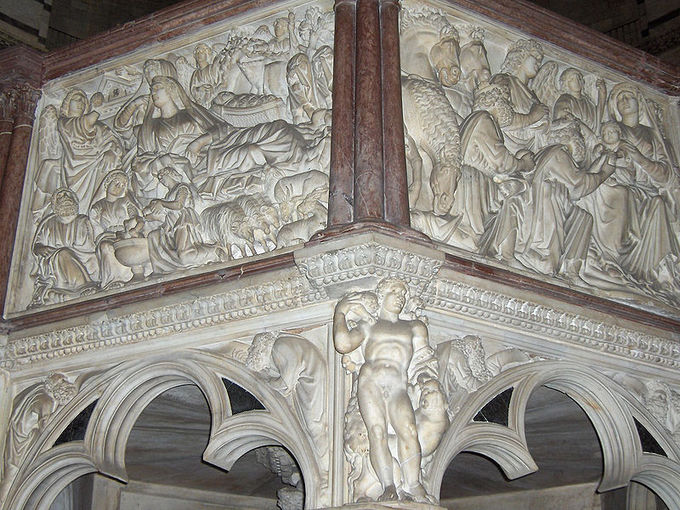 Detail of the pulpit at Pisa Baptistery: Pulpit (detail): the Annunciation to the Shepherds and the Adoration of the Magi. The trefoil arches supporting the pulpit show French Gothic influence.

Other well-known projects undertaken by Nicola Pisano include a marble pulpit for the Siena Cathedral, a commission he received after making his name in Pisa, and the Fontana Maggiore or Great Fountain at Perugia, which he worked on alongside his son Giovanni. 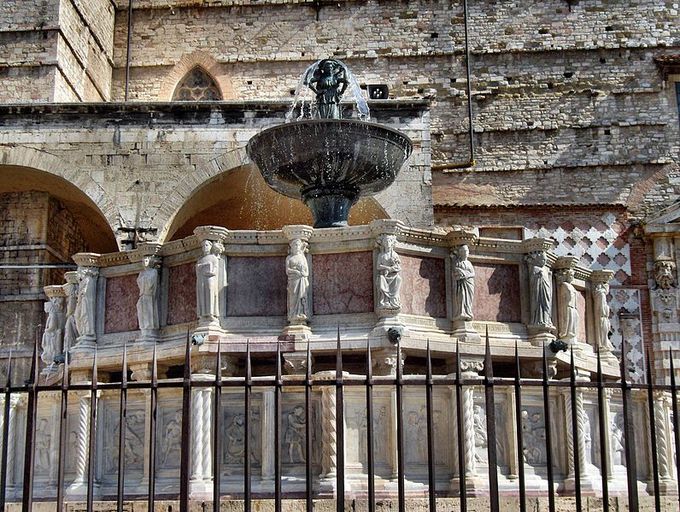 Fontana Maggiore, Perugia: Nicola and Giovanni Pisano worked side by side on the Fontana Maggiore at Perugia. On the twenty-five sides of the basin are sculptures representing prophets and saints, the labors of the months, the signs of the zodiac, scenes from Genesis, and events from Roman history.

Nicola’s son, Giovanni Pisano, was born in Pisa around 1250 and trained as a sculptor in his father’s workshop. He worked alongside his father on the pulpit in the Siena Cathedral and the Fontana Maggiore in Perugia. His earliest works imitated his father’s style, and it is difficult to separate the contributions of the two sculptors. However, after his Nicola’s death, Giovanni’s style grew more distinct. While it continued to incorporate Classical influences, it was more French Gothic in style and characterized by a bold, dramatic animation that had been missing in Nicola’s serene sculptural style.

Giovanni was the chief architect of the Siena Cathedral between 1287 and 1296. He also worked on statues decorating the exterior of the Pisa Baptistery, the facade of the church of San Paolo a Ripa d’Arno (St. Paul on the Bank of the Arno) at Pisa, and a monument commissioned by the emperor Henry VII, commemorating his wife Margaret of Brabant.

Giovanni’s greatest work is arguably a pulpit at the Cathedral of Pisa sculpted between 1302 and 1310. The pulpit incorporates a dramatic depiction of nine scenes from the New Testament carved in white marble with a chiaroscuro effect and a naturalistic carving of a nude Hercules. The figure of Prudence in the pulpit is thought to have been an inspiration for the Tuscan painter Masaccio in his Expulsion from the Garden of Eden. 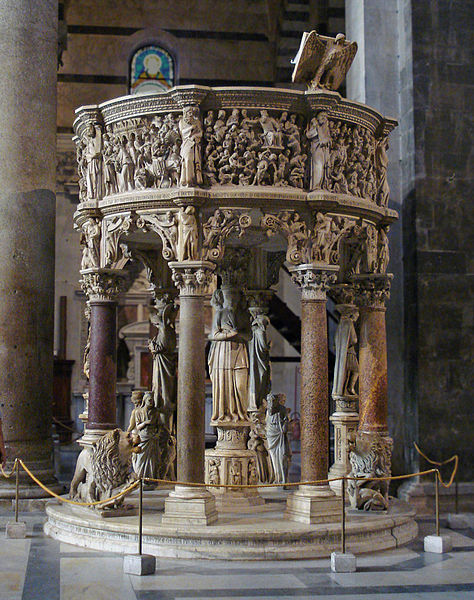 Pulpit of Pisa Cathedral: The pulpit at the Pisa Cathedral shows Giovanni Pisano’s distinct preference for a bold, animated style.