Thinking and Talking About Art

The political, socioeconomic, and cultural setting that a work of art is created in will affect how it is perceived within art history.

Art has existed almost as long as humankind itself and serves as a vehicle for the expression and communication of ideas and emotions. The canon of art history, however, has historically conveyed the political, religious, and philosophical ideals of the dominant power. Art history categorizes artworks and theories with a heavy reliance on the context or environment that the artwork was created in (i.e., its political, social, cultural, and economic settings).

Art history is the academic study of art objects in their historical development and stylistic contexts (i.e., genre, design, form, and style). A work of art from a particular historical period can be treated as an original source of information that was created at the time under study, and provides information about that time. Art historians study the contextual forces that shaped artists and their oeuvres , including their teachers and the influences of preceding styles; their patrons and their demands; their audiences; and their general socioeconomic, political, and cultural climate. These factors produce and influence different artistic styles and iconography , which are characteristic of their age and geographical location with reference to visual appearance, technique, and form.

In many ways, the historical backbone of art history is a celebratory chronology of beautiful creations of art commissioned by religious or civic institutions or wealthy individuals. Patronage of the arts has been used throughout history to endorse the ambitions and agenda of these institutions and individuals, and has been particularly important in the creation of religious art . For example, the Roman Catholic Church was an enthusiastic sponsor of the arts that resulted in a tremendous outpouring of architecture, painting, sculpture , and decorative crafts in medieval and Renaissance Europe.

Art’s context of reception depends on a variety of circumstances, both on the part of the artist as well as the artistic community the artist is participating in.

Identify the non-motivated, as well as motivated, factors that have given rise to art

Art’s context of reception depends on a variety of circumstances, both on the part of the artist as well as the artistic community and climate that the artist is participating in. Throughout human history, art has been created across a range of media for many different reasons and to serve many different functions. Some of these purposes are intrinsic to the human instinct for harmony and balance, as well as the human desire to experience mysterious things and express the human imagination. Art can transcend the concept of utility or external purpose. These ideas are called the non-motivated purposes of art. However, art also comes from intentional, conscious actions that aim towards specific external goals, and those qualify as the motivated purposes of art. Motivated purposes usually arise from the artwork’s historical context, which consists of a multitude of different factors, including the social, political, economic, and cultural settings of the period; the artist’s patrons; and the artist’s intended audience.

Primarily, art is a form of communication, and like most forms of communication, has intents and goals directed toward other people. It may be used for entertainment, seeking to evoke particular emotions or moods in viewers , or for social inquiry and political change by portraying aspects of society in complimentary or critical ways. 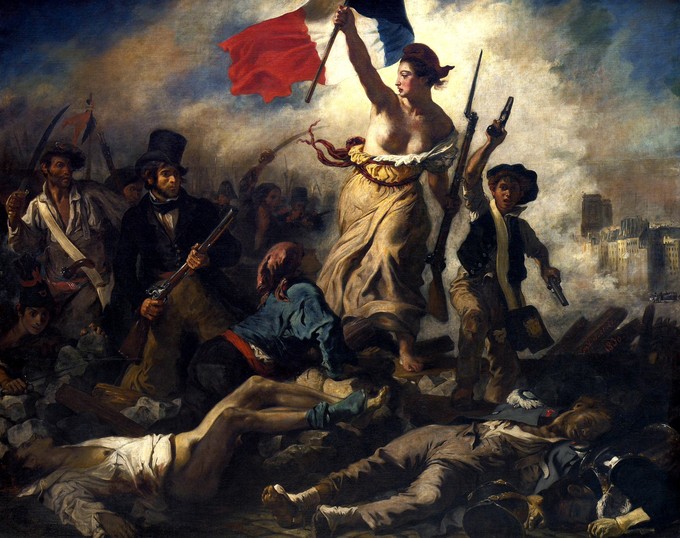 Eugène Delacroix, Liberty Leading the People, 1830: This painting reflects contemporary events, commemorating the July Revolution of 1830, which toppled Charles X of France. A woman personifying liberty leads the people forward over the bodies of the fallen, holding the flag of the French Revolution in one hand and brandishing a musket with the other. The painting reflects the context of the time: namely, a shift towards representing political current events in art.

Similarly, art may also be used as a form of propaganda by subtly influencing popular conceptions, or for commercial purposes, by making specific products more attractive to potential consumers. Religious or sacred art uses religious inspiration and motifs in order to illustrate the principles of a religion in a tangible form, and is often intended to provide spiritual instruction and connection with believers. 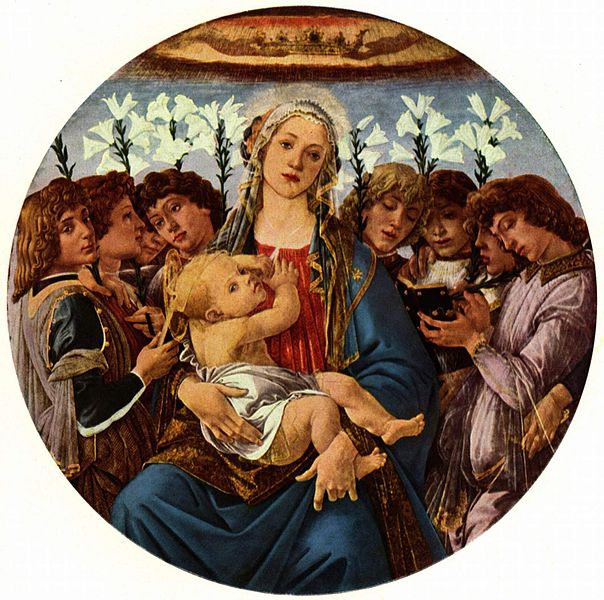 Sandro Botticelli, Madonna and Child with Eight Angels, 1478: An example of religious art, this painting was commissioned by the Catholic Church during the Renaissance. Like a great deal of religious art, the painting is meant to communicate the spiritual beauty of the religious concept echoed in the aesthetic beauty of an oil painting. The work reflects the context of its time, in which art was driven nearly exclusively by religious institutions and used to illustrate and provide instruction about the principles of the religion.

Through the course of history, much of art has traditionally been patronized by wealthy and powerful individuals, including rulers and aristocrats, as well as various civic and religious institutions. Patronage of the arts was typically used as a means of expressing and endorsing political, social, and cultural agendas and of displaying personal prestige. Works of art commissioned by wealthy patrons usually reflect their desires and aims.