Gothic art developed after the Romanesque, in the 12th century. The style continued to be used well into the 16th century in some parts of Europe, while giving way to the Renaissance style earlier in some regions.

Gothic art developed after the Romanesque, in the 12th century.  The style continued to be used well into the 16th century in some parts of Europe, while giving way to the Renaissance style earlier in other regions. The style was developed in Northern France due to socioeconomic, political, and theological reasons.

After the fall of the Roman Empire, people fled cities as they were no longer safe.  The Romanesque era saw many people living in the countryside of France while cities remained largely abandoned. During this time period, the French monarchy was weak and feudal landowners exerted a large amount of
regional power. In the 12th century, the French royalty strengthened their power, their titles, and their landholdings, which led to more centralized government. Additionally, due to advancements in
agriculture, population and trade increased. These changes brought people back to the cities, which is where we find the most expressive medium for the Gothic style—cathedrals.

Gothic architecture is unique in that we can pinpoint the exact place, the exact moment, and the exact person who developed it. Around 1137, Abbot Suger began re-building the Abbey Church of St. Denis. In his re-designs, which he wrote about extensively, we can see elements of what would become Gothic architecture, including the use of symmetry in design and ratios.

Ratios became essential to French Gothic cathedrals because they expressed the perfection of the universe created by God. This is where we also see stained glass emerge in Gothic architecture. Abbot Suger adopted the idea that light equates to God. He wrote that he placed pictures in the glass to replace wall paintings and talked about them as educational devices. The windows were instructional in theology during the Gothic era, and the light itself was a metaphor for the presence of God.

Cathedrals served as religious centers and they were important for local economies. Pilgrims would travel throughout Europe to see relics, which would bring an influx of travelers and money to cities with Cathedrals. 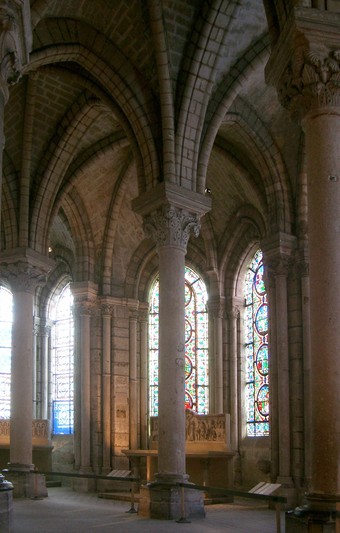 Ambulatory at St. Denis: We can see the Gothic style emerge at St. Denis in Abbot Suger’s re-designs.

While the Gothic style was developed in Northern France, it spread throughout Europe where different regional styles were adopted. In England, for example, cathedrals became longer than they were tall and architects in Italy typically did not incorporate stained glass windows in the manner that the French did.

Illuminated manuscripts provide excellent examples of Gothic painting. A prayer book, known as the book of hours, became increasingly popular during the Gothic age and was treated as a luxury item. The Hours of Mary of Burgundy, produced in Flanders c. 1477, contains a miniature showing Mary of Burgundy in devotion with a wonderful depiction of a French Gothic Cathedral behind her. 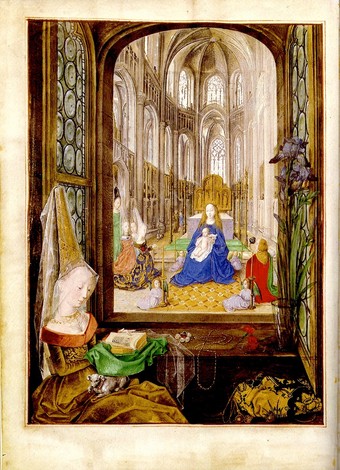 Miniature from The Hours of Mary of Burgundy: This piece contains a miniature showing Mary of Burgundy in devotion with a wonderful depiction of a French Gothic Cathedral behind her. 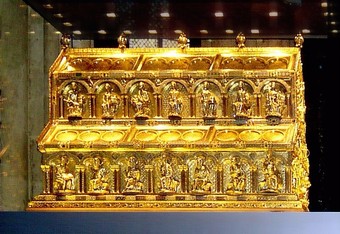 Shrine of the Three Kings at Cologne Cathedral: The metalwork by Nicolas of Verdun demonstrates his knowledge and understanding of classical elements in art.

Evaluate the structure and symbolism of the French Gothic cathedral

The Gothic cathedral represented the universe in microcosm, and each architectural concept, including the height and perfect ratios of the structure, were intended to convey a theological message: the great glory of God and his creation of a perfect universe. The building becomes a microcosm in two ways. First, the mathematical and geometrical nature of the construction is an image of the orderly universe, in which an underlying rationality and logic can be perceived. Second, the statues, sculptural decoration, stained glass, and murals incorporate the essence of creation in depictions of events from the Old and New Testaments.

Most Gothic churches have the Latin cross (or “cruciform”) plan, with a long nave making the body of the church. This nave is flanked on either side by aisles, a transverse arm called the transept, and, beyond it, an extension referred to as the choir.

One of the defining characteristics of Gothic architecture is the pointed or ogival arch. Arches of this type were used in the Near East in pre-Islamic as well as Islamic architecture before they were structurally employed in Gothic architecture. They are thought to have been the inspiration for their use in France at the Autun Cathedral, which is otherwise stylistically Romanesque. The way in which the pointed arch was drafted and utilized developed throughout the Gothic period, and four popular styles emerged: the Lancet arch, the Equilateral arch, the Flamboyant arch, and the Depressed arch. 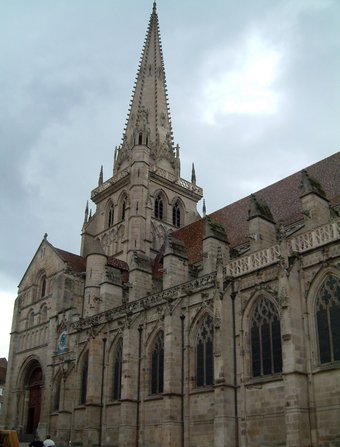 The Gothic vault, unlike the semi-circular vault of Roman and Romanesque buildings, can be used to roof rectangular and irregularly shaped plans such as trapezoids. This enabled architects to raise vaults much higher than was possible in Romanesque architecture. While the use of the pointed arch gave a greater flexibility to architectural form, it also gave Gothic architecture a very different and more vertical visual characteristic than Romanesque architecture.

In Gothic architecture the pointed arch is used in every location where a vaulted shape is called for, both structurally and decoratively. Gothic openings such as doorways, windows, arcades, and galleries have pointed arches. Rows of pointed arches upon delicate shafts form a typical wall decoration known as a blind arcade. Niches with pointed arches that contain statuary are a major external feature. The pointed arch lent itself to elaborate intersecting shapes, which developed complex Gothic tracery within window spaces and formed the structural support of the large windows that are characteristic of the style. 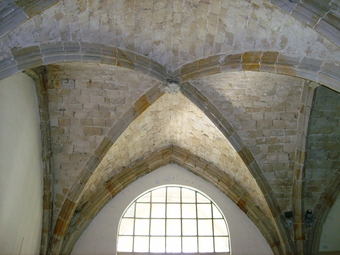 The façade of a large church or cathedral, often referred to as the West Front, is generally designed to create a powerful impression on the approaching worshiper. In the arch of the door (the tympanum) is often a significant sculpture representing scenes from Christian Theology, most frequently Christ in Majesty and Judgment Day. If there is a central door jamb or a tremeau, then it frequently bears a statue of the Madonna and Child.

The West Front of a French cathedral, along with many English, Spanish, and German cathedrals, generally has two towers, which, particularly in France, express an enormous diversity of form and decoration. A characteristic of French Gothic church architecture is its height, both absolute and in proportion to its width, the verticality suggests an aspiration to Heaven. As the Gothic Age progressed in France, the different towns and cities may have been in competition with one another to create the tallest Cathedral. Architects also closely guarded the ratios they used in their architectural plans. 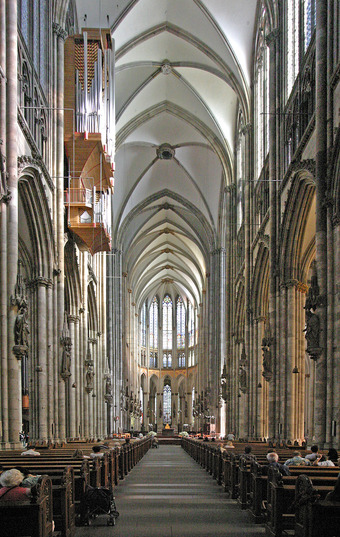 Interior of Cologne Cathedral: The verticality demonstrated in this image is a definitive feature of Gothic architecture.

Another one of the most distinctive characteristics of Gothic architecture is the expansive area of windows and the large size of the many individual windows. The increase in the use of large windows during the Gothic period is directly related to the use of the pointed arch, the ribbed vault, and the flying buttress. All of these architectural features absorbed the weight of the structure, which had rested on the walls in Romanesque architecture. Since the walls had less weight to support, thanks to these innovations, architects were able to pierce the walls of the structures with windows without risking the structural soundness of the cathedral.