Italy in the Gothic Period

In the early Renaissance, painters began to embrace naturalistic styles, creating images with attention to form and space.

The Florentine School of Painting is characterized by the naturalism in art that started to emerge in Florence in the 13th century. This set the stage for what would become the great period of Florentine art in later centuries that would include the work of great artists such as Michelangelo, Fra Angelico, Botticelli, Donatello, and Lippi.

However, art in Florence and northern Italy during the period between 1200 and 1400 was still in transition; it was a bridge in Art History between the Medieval period and Byzantine and Gothic styles, and the Early Modern period and Renaissance styles. Sometimes referred to as the proto-Renaissance period, art and architecture in northern Italy provided important hints at the trends that would take hold over the next centuries in the rest of Europe.

City states and duchies such as Pisa, Milan, Lucca, and Florence were the main homes of these developments. In spite of the many challenges during the period, such as the ongoing ravages of the Black Plague, these city states experienced periods of politically stability and economic growth, which provided a good foundation for new experimentation in art.

In Florence, leading families prospered under the economic growth promoted through trade. Each of these leading families vied for power, but also for cultural prominence, and became great patrons of the arts (the Medici family being the prime example).

At the same time, there were great changes occurring in art both in terms of styles and philosophies. One important change was a focus on the individual in religious practices, which also translated into a greater naturalistic and humanist focus in art.

Painters in this city wholeheartedly embraced naturalist styles. Harkening back to classical figures, they created images with attention to portraying strong emotions and relationships between figures—painting that expressed a type of realism not present in Byzantine styles.

One painter who demonstrated the shift that was occurring in Florentine painting during this time is Cimabue (c.1240-1302). In his Maesta the viewer may observe elements of both the earlier Byzantine style of painting, as well as the emerging Renaissance style. The work retains the gold background that was familiar in Byzantine icons , and his figures are rendered in a Byzantine style. However, Cimabue made efforts to create space in this work, which would become an important aspect in Renaissance art. His angels surrounding the Virgin and Child overlap one another to indicate space and Cimabue paid great attention to the Virgin’s throne to create a realistic depiction of space as well. 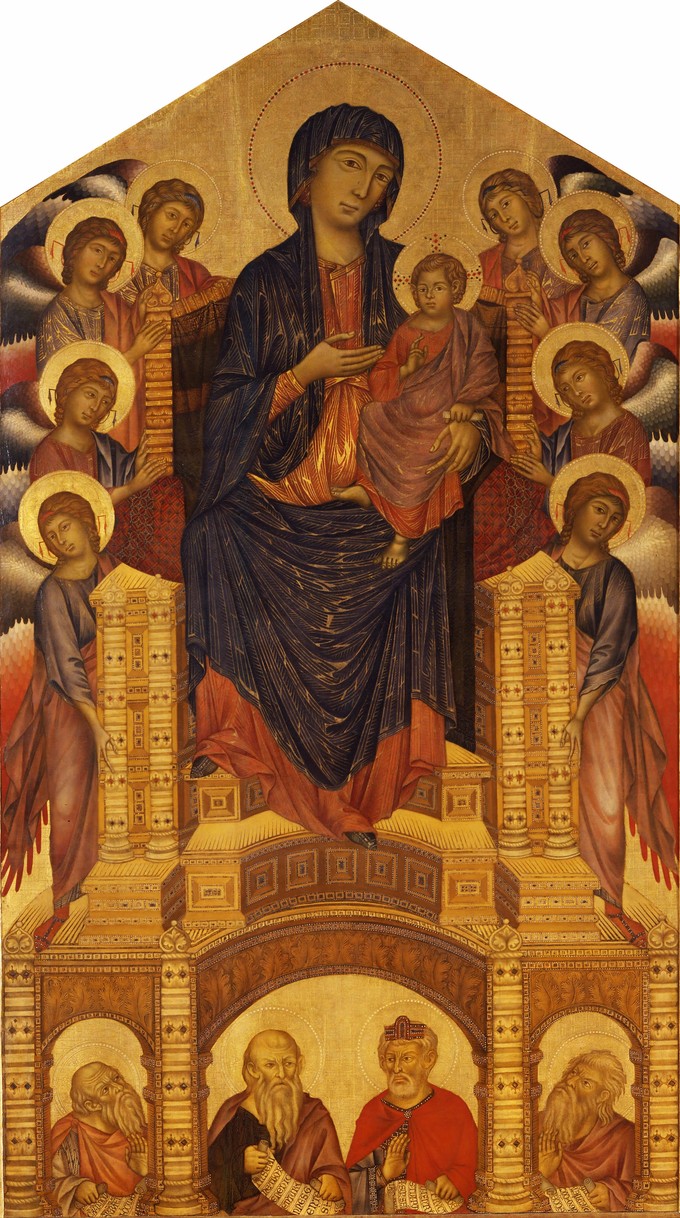 Cimabue, Maesta, c.12801285. : Cimabue’s artwork reflects the changes that were occurring in Florentine painting during this period, by demonstrating both the older Byzantine style as well as the emerging Renaissance style.

Artists were able to work in Florence at least in part due to the influential art guilds , including the painters’ guild Arte dei Medici e Spezeiali. These guilds also became important patrons of the arts, and took over the maintenance and improvements of religious buildings.

The Sienese School of painting was more conservative than painting in Florence, but nonetheless important, flourishing between the 1200s and 1400s. Some of the important painters from this period included Duccio and his pupils Ambrogio Lorenzetti, Simone Martini, and Matteo di Giovanni.

Duccio di Buoninsegna is one of the best known Siena painters of the time. His work was often ornate with the use of gold leaf and jewels, demonstrating how Siena was focused on the physical materiality of work. His work in egg tempera also used brighter colors, rounded out features in faces and hands, and played with light and dark colors to highlight the figures under the drapery creating natural form , which was very unlike Byzantine figures but important to emerging Renaissance artists.

Duccio’s work was considered quite emotional, with a renewed focus on storytelling through the interactions of figures in the images and the selection of strong interpretations of biblical stories. The altarpiece Maestà (1308–1310) is one of his great works. Composed of multiple paintings and commissioned by the city of Sienna, the piece depicts the life of the Virgin Mary and Christ. The Virgin’s knee juts out toward the viewer as Duccio has created a realistic sense of form–an essential element of the emerging Renaissance style. While his work retains the gold background and gold halos so important in Byzantine art (and to Sienese patrons), this art acts as a bridge between the late Medieval era and Early Renaissance.

Duccio, Maestà, 1308–1311: Duccio’s work demonstrates the emerging Renaissance style, as seen in the developed form of the figures, as well as the older Byzantine styles and the Sienese preference for materiality with the use of gold.

Giotto was one of the most revered painters of his time and an important bridge between the medieval and renaissance periods.

Describe Giotto’s use of naturalism, storytelling, and perspective in his work

Giotto di Bondone was born during the late 1200s in the Florence region of Italy. He would go on to become one of the most revered painters of his time, and an important bridge between the medieval and renaissance periods.

The Arena Chapel frescoes were commissioned by the patron Enrico Scrovegni and depict scenes from the life of the Virgin Mary and Jesus. They are Giotto’s best known masterpieces. 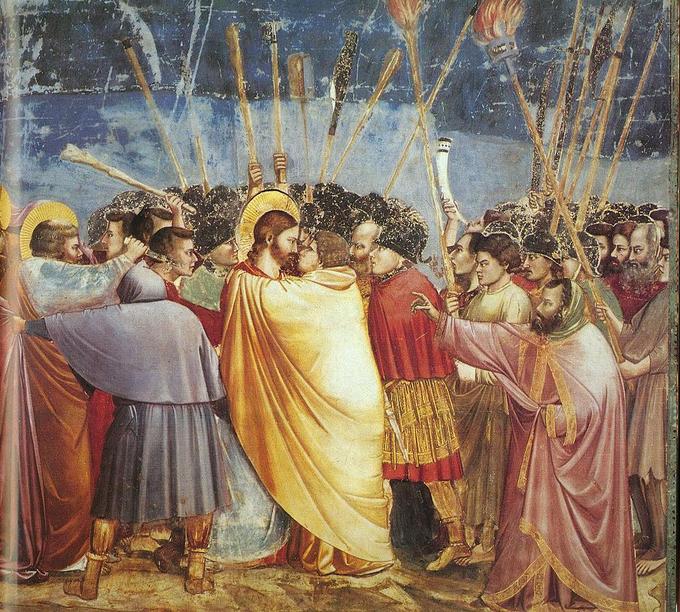 Kiss of Judas: One of the most dramatic scenes from Giotto’s Arena Chapel frescoes depicts the moment Judas betrays Christ by identifying him to Roman soldiers.

Scholars debate over which works should be attributed to Giotto and which works should be attributed to assistants or other artists. For example, Giotto appears to have apprenticed with the Florentine painter Cimabue in Rome and may have been responsible for portions of the Chapel at Assisi. However, there is no documentation to confirm his work in Assisi.

Giotto’s distinct contribution to the history of art was a return to a style that directly references the natural world, a style that had not been emphasized by Medieval or Byzantine painters. While Medieval and Byzantine styles favored flat, elongated figures and a lack of natural perspective Giotto returned painting to a style that aimed to capture the naturalism of the human form.

Another strength of Giotto’s work was his storytelling ability. He was skilled at selecting strong interpretations of Biblical stories and at drawing viewers to the most visually and spiritually rich aspects of the story. This focus on relationships between figures, as well as a renewed interest in perspective and life drawing, are some of the aspects that would become prominent in Renaissance painting.

The Gothic style was the leading architectural style in Italy during this time period. However, Italian architects interpreted Gothic architecture differently than they did in France, resulting in a few key regional differences.

Gothic architecture was developed in France and was characterized by lancet , or pointed, archways used for both windows and doorways. These allowed for both thinner walls and larger windows. The stained glass windows that seemed to replace walls altogether are the hallmark of French Gothic architecture. Other characteristics of the Gothic style include the increased use of flying buttresses to support walls, and a shift towards more slender and ornate columns , and vaulted ceilings. 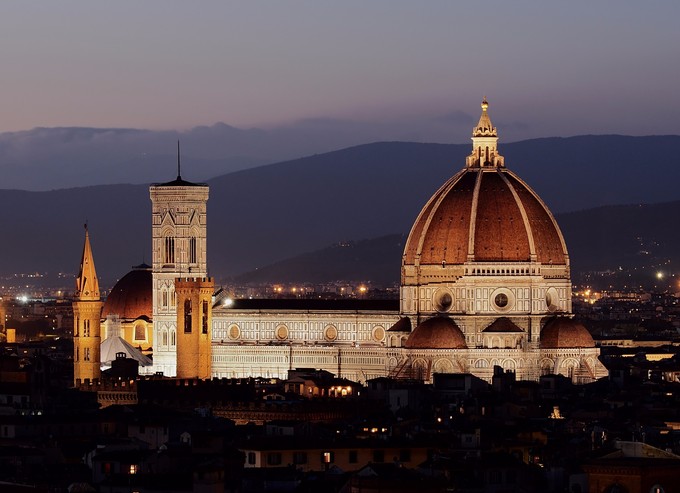 Florence Cathedral, begun 1296: The Cathedral is pictured lit up at night, showcasing its Gothic style and large dome. 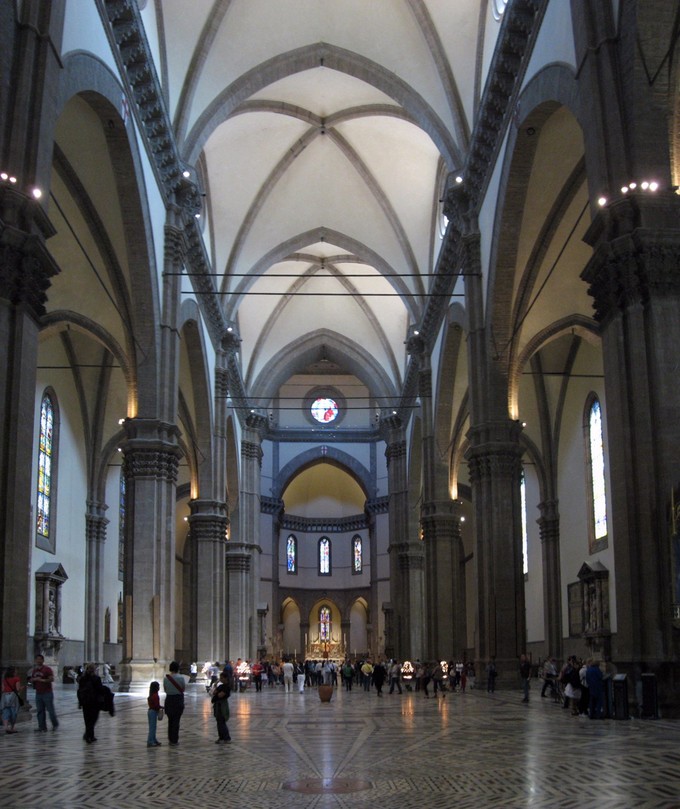 Florence Cathedral, Interior view, begun 1296: In the interior of the Cathedral, you can see the Gothic elements, such as the groin vaults and pointed arches.