Throughout the late 19th and 20th centuries, Chinese painting evolved under the influence of the People’s Republic and exposure to the West.

Describe the adoption of Western techniques in the New Culture Movement, the subsequent revival of traditional Chinese painting, and the closing of art schools during the Cultural Revolution

The Evolution of Chinese Painting

Chinese painting is one of the oldest continuous artistic traditions in the world. Painting in the traditional style is known today in Chinese as guó huà, meaning national or native painting, as opposed to Western styles of art that became popular in China in the 20th century. Traditional painting involves essentially the same techniques as calligraphy and is done with a brush dipped in black or colored ink (oils are not typically used). As with calligraphy, the most popular materials for paintings are paper and silk. The finished work can be mounted on scrolls, such as hanging scrolls or handscrolls . Traditional painting can also be done on album sheets, walls, lacquerware , folding screens, and other media .

In the late 19th and 20th centuries, Chinese painters were increasingly exposed to Western art. Some artists who studied in Europe rejected traditional forms of Chinese painting; others tried to combine the two traditions. Among the most celebrated modern painters is Qi Baishi, who began life as a poor peasant and became a great master. His best known works depict flowers and small animals.

Chinese Painting in the Republic

Beginning with the New Culture Movement of the mid-1910s and 1920s, Chinese artists started to adopt Western techniques. By the early years of the People’s Republic of China (formed in 1949), however, artists were encouraged to employ socialist realism. Some Soviet Union socialist realism techniques were imported without modification, and painters were assigned subjects and expected to mass -produce paintings that depicted social issues. At the same time, they were ordered to cease traditional Chinese painting.

This regimen was considerably relaxed in 1953 and during the Hundred Flowers Campaign of 1956–57. The Hundred Flowers Campaign was a period in the People’s Republic of China during which the Communist Party of China encouraged its citizens to openly express their opinions of the communist regime. Following this campaign, traditional Chinese painting experienced a significant revival. Along with these developments in professional art circles, there was a proliferation of peasant art depicting everyday life in the rural areas on wall murals and in open-air painting exhibitions.

The Cultural Revolution of 1966

Some of the most enduring images of Cultural Revolution come from the poster art. Propaganda art in posters was used as a campaigning tool and mass communication device, produced in large number and widely disseminated. Such artwork often served as the main source of information for the people, used by the government to educate the public to the ideological values of the Communist state. There were many types of posters, the two main genres being the dazibao (a big character poster) and commercial propaganda poster. 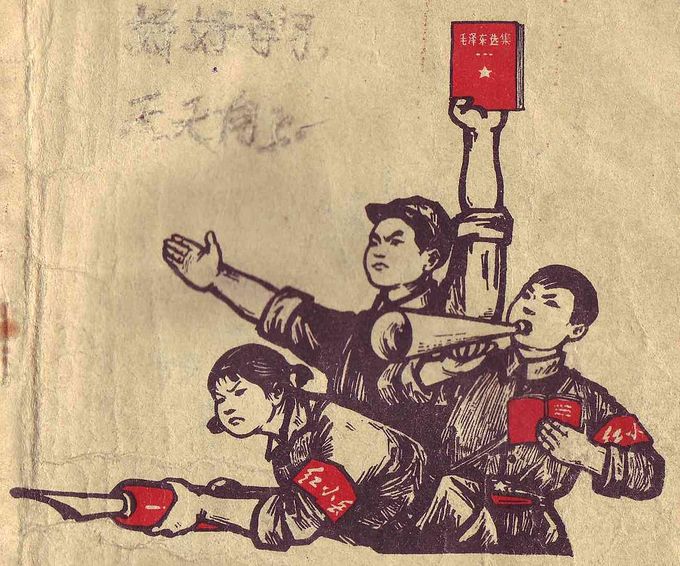 Propaganda art: Red Guards on the cover of an elementary school textbook

Following the Cultural Revolution, many art schools and professional organizations were reinstated. Exchanges were set up with groups of foreign artists, and Chinese artists began to experiment with new subjects and techniques. One particular case of freehand style (xieyi hua) may be noted in the work of the child prodigy Wang Yani, born in 1975, who started painting at age 3 and has since considerably contributed to the exercise of the style in contemporary artwork.

After Chinese economic reform, more and more artists boldly conducted innovations in Chinese Painting. New brush skills were developed, such as vertical direction splash water and ink as seen in the work of artist Tiancheng Xie. New styles were created by integrating traditional Chinese and Western painting techniques, such as Heaven Style Painting as exemplified by artist Shaoqiang Chen. According to points of view by artists, art institutes, publications, and media, the Heaven Style painting was derived based on painting techniques from the Song Dynasty (960–1279) and Yuan Dynasty (1271–1368) and integrated techniques of perspective science and contemporary photography. New styles also expressed contemporary themes with typical nature scenes of certain regions, such as the Lijiang Painting Style and the work of artist Gesheng Huang.

Elegance of the Lotus Looking from Heaven, by Shaoqiang Chen, Chinese Ink and Watercolor on Rice Paper: Shaoqiang Chen created a new style of Chinese painting in the 21st century known as Heaven Style painting.

Until recently, art exhibitions deemed controversial have been routinely shut down by police, and performance artists in particular faced the threat of arrest in the early 1990s. More recently, there has been greater tolerance by the Chinese government, though many internationally acclaimed artists are still restricted from media exposure at home or have exhibitions ordered closed.