Modern Korean art is influenced by its historical roots, its recent tumultuous history, and various forms of Western art.

Modern Korean art is influenced by its historical roots (including early Korean shamanist art, Korean Buddhist art, and Korean Confucian art) and its recent tumultuous history, as well as various forms of Western art in the 20th century. From the 1880s onward, the Japanese invasion of Korea had a significant impact on Korean art. Works of art were looted and destroyed, schools of art were closed, and Korean styles were replaced with paintings of Japanese subjects in Japanese styles. In 1945, Korea was freed from Japan, and new and contemporary styles of art have emerged since then.

In modern Korea, works in metal, jade, bamboo, and textiles have had a limited resurgence. The South Korean government has tried to encourage the maintenance of cultural continuity through awards and scholarships for younger students in rarer Korean art forms.

Korean fabric arts have a long history and include many art forms such as embroidery (used in costumes and screenwork), knots (best represented in the work of Choe Eun-sun and used in costumes and as wall-decorations), and lesser-known weaving skills as indicated in rarer arts.

Korean paper art includes all manner of handmade paper (hanji), which is used for architectural purposes (such as window screens and floor covering), printing, artwork, the Korean folded arts (such as paper fans and figures), and Korean paper clothing. Contemporary paper artists are very active, and the art of Korean paper clothing has an annual fashion show in the city of Jeonju, attracting world attention. 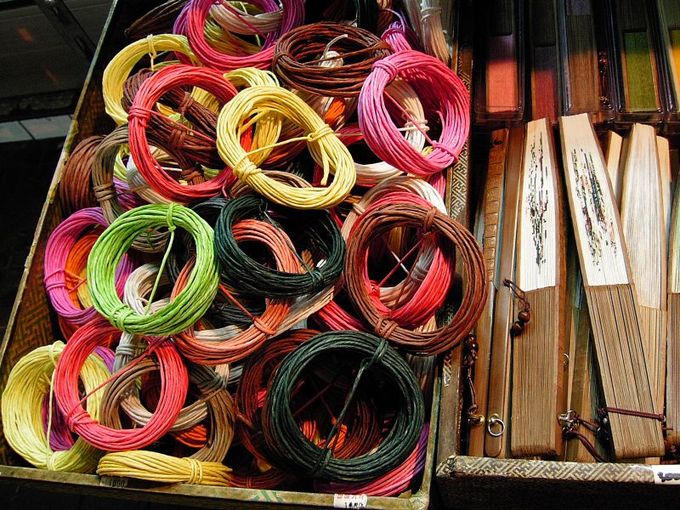 Korean paper arts: This image shows colorful hanji strings next to a box of Korean fans.

Contemporary Korean painting demands an understanding of Korean ceramics and pottery. The glazes and textures of Korean paintings make them more similar to the tradition of ceramic art than of western painterly traditions, even if many of the subjects appear to be of Western origin. Brushstrokes are also far more important than they are to the Western artist; paintings are judged on brushstrokes more often than pure technique. Korean calligraphy is seen as an art where brushstrokes reveal the artist’s personality, enhancing the subject matter that is painted.

Major 20th century Korean artists include Park Su-geun, Nam June Paik , Chang Ucchin, and Seund Ja Rhee. A new wave of Korean art includes the work of Lee Dong Youb and Suh Yongsun , while 21st century Korean artists include Amy Sol, David Choe, Seonna Hong, Tschoon Su Kim, and Junggeun Oh. Suh Yongsun was elected “Korea’s artist of the year 2009” and makes paintings with heavy brushstrokes of subjects from both Korean history and urban scenes of Western cities, such as New York and Berlin. His artwork is a good example of the combination of Korean and Western subjects and painting styles. 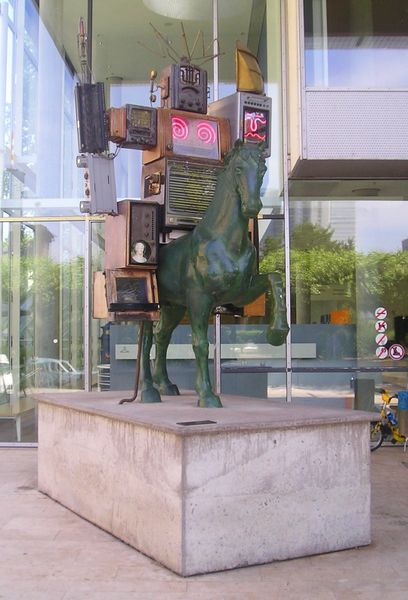 Pre-Bell-Man, statue in front of the Museum für Kommunikation, Frankfurt am Main, Germany: Nam June Paik (July 20, 1932–January 29, 2006) was a Korean American artist who worked with a variety of media. He is considered to be the first video artist.

Manhwa is the general Korean term for comics and print cartoons . Outside of Korea, the term usually refers specifically to South Korean comics. The term, along with manga, is a cognate of the Chinese manhua. Manhwa were inspired by classic Asian arts, especially Chinese, and have been influenced by the dramatic modern history of Korea, resulting in a diversity of forms and genres. Distinctive manhwa can be found in editorial comic strips, artistically-oriented works, and webcomic serials. 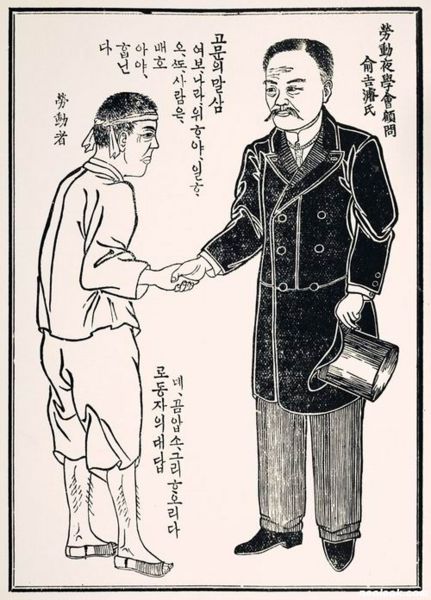 The first woodcut manhwa by an unidentified painter, printed in Gamgak Nodong Yahak Dokbon in 1908: Manhwa, or Korean comics, were inspired by classic Asian arts and have been influenced by the dramatic modern history of Korea. In this cartoon, an Adviser of Workers’ Evening School Council says “Hello, we have to work for our country and people have to learn.” The worker then replies, “Yes, thanks. I will do that. “

During Kim Il-sung’s rule in the north, painting was allowed only in the socialist realist genre, and propaganda posters were the stock of North Korean visual arts. Changing political systems from Communism merging with the old yangban class of Korean nationalistic leaders brought about a different kind of visual arts that is quite distinctive from the socialist realism common to other Communist art. This is particularly seen in the patriotic films that dominated the culture from 1949 to 1994, as well as the reawakened architecture, calligraphy, fabric work, and neo-traditional painting from 1994 to today. The impact of this influence can be seen on revolutionary posters, lithography and multiples, dramatic and documentary films, realistic paintings, and grand architecture; it can also been seen to a lesser extent in areas of domestic pottery, ceramics, exportable needlework, and the visual crafts. Sports art and politically-charged revolutionary posters have been the most sophisticated and are internationally collected by auction houses and specialty collectors.

After Kim Il-sung’s death in 1994, directives on painting were relaxed and sometimes completely abolished under Kim Jong-il. New art forms, including a kind of impressionism specific to North Korea, rose to complement posters. The particularities of North Korean communism have reinvigorated old subjects and techniques with a nationalist dimension . 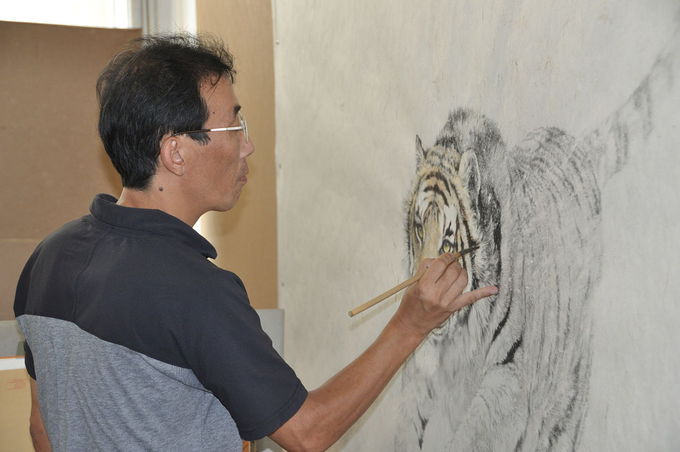 An artist of the Mansudae Art Studio paints a tiger. : The particularities of North Korean communism have reinvigorated old subjects and techniques with a nationalist dimension.