Art of the Ancient Near East

The Neo-Babylonian Empire developed an artistic style motivated by their ancient Mesopotamian heritage.

Describe the artistic and architectural accomplishments of King Nebuchadnezzar II, including the city of Babylon

The Neo-Babylonian Empire, also known as the Chaldean Empire, was a civilization in Mesopotamia that began in 626 BC and ended in 539 BC.

During the preceding three centuries, Babylonia had been ruled by the Akkadians and Assyrians, but threw off the yoke of external domination after the death of Assurbanipal, the last strong Assyrian ruler. The Neo-Babylonian period was a renaissance that witnessed a great flourishing of art, architecture, and science.

The Neo-Babylonian rulers were motivated by the antiquity of their heritage and followed a traditionalist cultural policy, based on the ancient Sumero-Akkadian culture . Ancient artworks from the Old-Babylonian period were painstakingly restored and preserved, and treated with a respect verging on religious reverence. Neo-Babylonian art and architecture reached its zenith under King Nebuchadnezzar II, who ruled from 604–562 BC and was a great patron of urban development, bent on rebuilding all of Babylonia’s cities to reflect their former glory.

It was Nebuchadnezzar II’s vision and sponsorship that turned Babylon into the immense and beautiful city of legend. The city spread over three square miles, surrounded by moats and ringed by a double circuit of walls. The river Euphrates, which flowed through the city, was spanned by a beautiful stone bridge. At the heart of the city lay the ziggurat Etemenanki, literally “temple of the foundation of heaven and earth.” Originally seven stories high, it is believed to have provided the inspiration for the biblical story of the Tower of Babel.

It was also during this period that Nebuchadnezzar supposedly built the Hanging Gardens of Babylon, although there is no definitive archeological evidence to establish their precise location. Ancient Greek and Roman writers describe the gardens in vivid detail. However, the lack of physical ruins have led many experts to speculate whether the Hanging Gardens existed at all. If this is the case, writers might have been describing ideal mythologized Eastern gardens or a famous garden built by the Assyrian king Sennacherib (704–681 BCE) at Nineveh roughly a century earlier. If the Hanging Gardens did exist, they were likely destroyed around the first century CE. 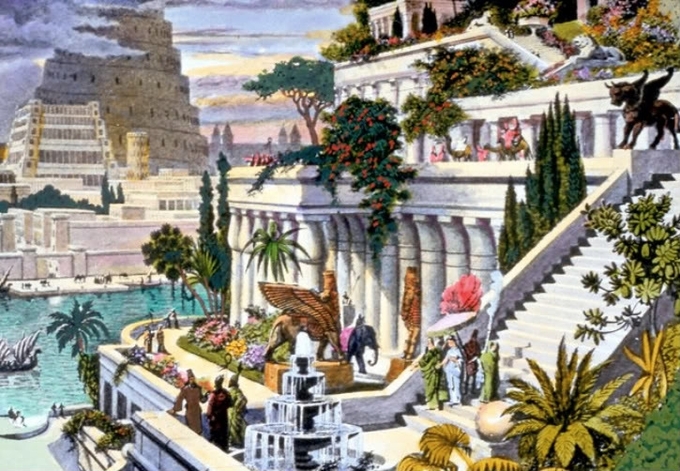 Most of the evidence for Neo-Babylonian art and architecture is literary. The material evidence itself is mostly fragmentary. Some of the most important fragments that survive are from the Ishtar Gate, the eighth gate to the inner city of Babylon. It was constructed in 575 BC by order of Nebuchadnezzar II, using glazed brick with alternating rows of bas-relief dragons and aurochs. Dedicated to the Babylonian goddess Ishtar, it was a double gate, and its roofs and doors were made of cedar, according to the dedication plaque. Babylon’s Processional Way, which was lined with brilliantly colorful glazed brick walls decorated with lions, ran through the middle of the gate. Statues of the Babylonian gods were paraded through the gate and down the Processional Way during New Year’s celebrations. 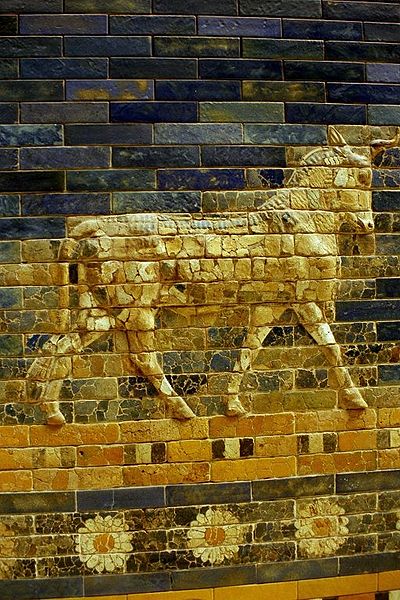 Ishtar Gate detail: An aurochs above a flower ribbon with missing tiles filled in (Ishtar Gate bas-relief, housed in the Pergamon Museum in Berlin). A prominent characteristic of Neo-Babylonian art and architecture was the use of brilliantly colorful glazed bricks.

The reconstruction of the Ishtar Gate and Processional Way, built at the Pergamon Museum in Berlin in 1930, features material excavated from the original site. To compensate for missing pieces, museum staff created new bricks in a specially designed kiln that was able to match the original color and finish. Other parts of the gate, which include glazed brick lions and dragons, are housed in different museums around the world. 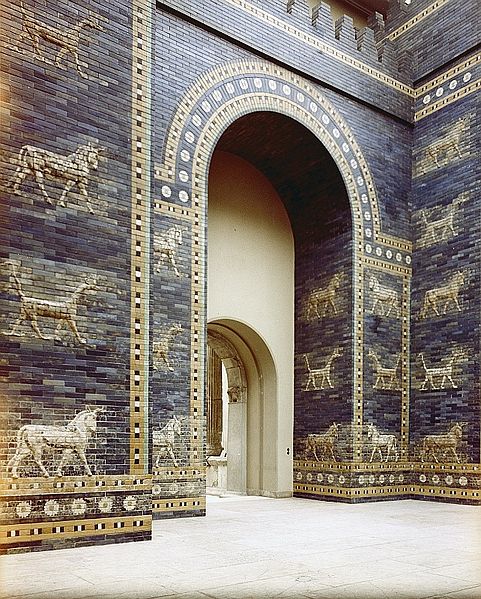 Ishtar Gate at Pergamon Museum: This was reconstructed in Berlin in 1930, using materials excavated from the original build-site.