Africa in the Modern Period

The Benin Bronzes are a collection of more than 3,000 brass plaques from the royal palace of the Kingdom of Benin, located in present-day Nigeria.

Explain the distinguishing characteristics of the Benin Bronzes

The Benin Bronzes are a collection of more than 3,000 brass plaques and sculptures from the royal palace of the Kingdom of Benin, located in present-day Nigeria. Collectively, the plaques form the best known examples of Benin art created by the Edo people from the 13th century; other forms of Benin art consist of additional sculptures in brass or bronze, including some famous portrait heads and smaller pieces.

History and Seizure of the Bronzes

Bronzes are believed to have been cast in Benin since the 13th century, and some of the Benin Bronzes in the collection date from the 15th and 16th centuries. Today, it is clear that the bronzes were made in Benin from an indigenous culture, centuries before contact with Portuguese traders. It is believed that two “golden ages” in Benin metal workmanship occurred during the reigns of Esigie (1550) and of Eresoyen (1735–50), when their workmanship achieved its highest qualities.

At the end of the 19th century, most of the plaques and other objects were removed by the British during the Punitive Expedition of 1897 as imperial control was being consolidated in Southern Nigeria. Two hundred of the pieces were taken to the British Museum in London, while the rest were purchased by other European museums. Today, a large number are held by the British Museum. Other notable collections are in Germany and the United States. In 1936, Oba Akenzua II, the traditional leader of the Edo people in Nigeria, began a movement to return the art to its proper place in Nigeria; however, only two of the 3,000 bronzes were returned by the end of his reign in 1978. Nigeria has since bought around 50 Bronzes from the British Museum and has repeatedly called for the return of the remainder.

While the collection is known as the Benin Bronzes, like most West African “bronzes,” the pieces are mostly made of brass of variable composition. There are also pieces made of wood, ceramic, ivory, and mixtures of bronze and brass, among other materials. The metal pieces were made using lost-wax casting and are considered among the best sculptures made using this technique. 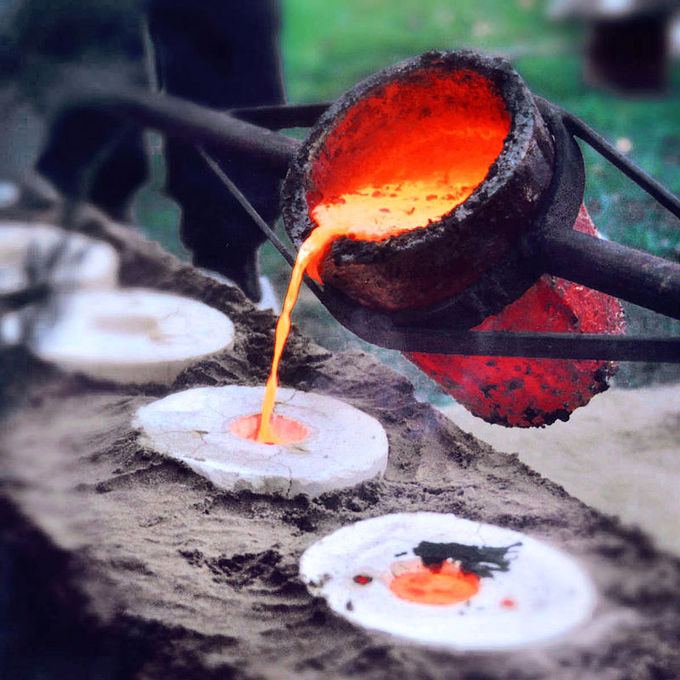 The Bronzes depict a variety of images, including animals, fish, humans, and scenes of court life. Some of the reliefs represent important battles of the 16th century wars of expansion; however, the majority depict noble dignitaries wearing splendid ceremonial dress. Most of the plaques portray static figures either alone, in pairs, or in small groups arranged hierarchically around a central figure. They were cast in matching pairs, although each was individually made. The bronzes are more naturalistic than most African art of the period, and the surfaces are designed to highlight contrasts between light and metal. The features of many of the heads are exaggerated from natural proportions, with large ears, noses, and lips, which are shaped with great care. The most notable aspect of the works is the high level of the great metal-working skill at lost-wax casting. 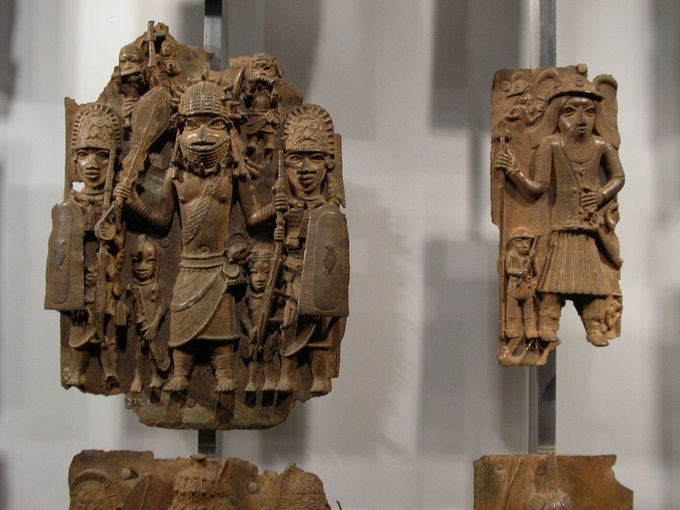 Bronze and ivory objects had a variety of functions in the ritual and courtly life of the Kingdom of Benin. They were used principally to decorate the royal palace, which contained many bronze works; many were hung on the pillars of the palace by nails punched directly through them. As a courtly art, their principal objective was to glorify the Oba—the divine king—and the history of his imperial power or to honor the queen mother. Art in the Kingdom of Benin took many forms, of which bronze and brass reliefs and the heads of kings and queen mothers are the best known. Bronze receptacles, bells, ornaments, jewelry, and ritual objects also possessed aesthetic qualities and originality, demonstrating the skills of their makers, although they are often eclipsed by figurative works in bronze and ivory carvings.

An important aspect of the works is their exclusivity: property was reserved only for certain social classes, reflecting the strict hierarchical structure of society in the Kingdom of Benin. In general, only the king could own objects made of bronze and ivory; however, he could allow high-ranking individuals to use such items, such as hanging masks and cuffs made of bronze and ivory. 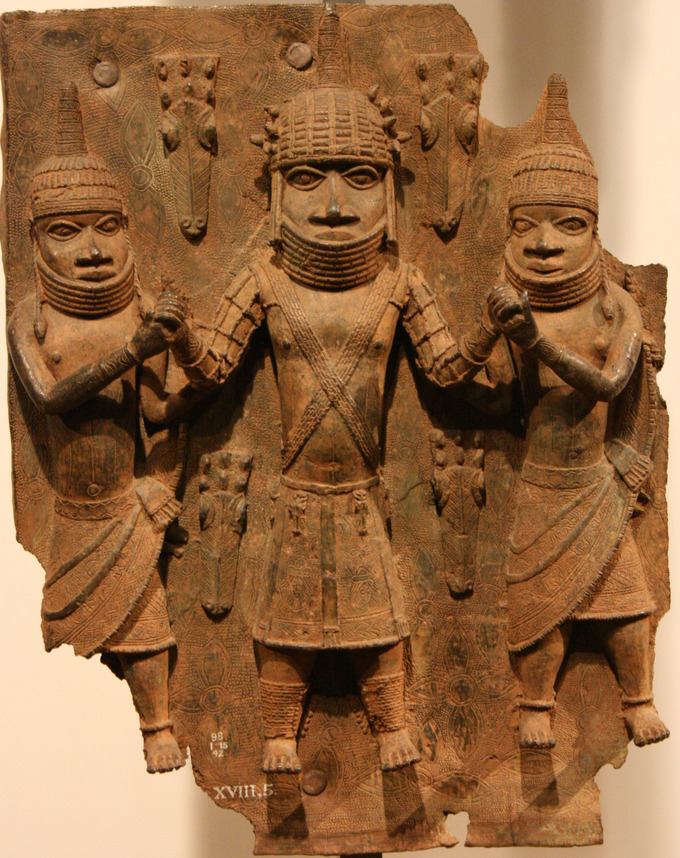 Benin brass plaque: The Oba of Benin with attendants and Europeans.

Art of the Igbo

The Igbo people are well known for their music, dance, traditional masks, and Mbari architecture.

Igbo culture includes the various customs, practices, and traditions of the indigenous Igbo people of southern Nigeria. It comprises archaic practices as well as new traditions introduced to the Igbo culture either through evolution or outside influences. These customs and traditions include the Igbo people’s visual art, music, and dance forms, as well as their attire, cuisine, and language dialects. Because of their various subgroups, the variety of their culture is further heightened.

The Igbo people have a musical style into which they incorporate various percussion instruments: the udu, which is essentially designed from a clay jug; an ekwe, which is formed from a hollowed log; and the ogene, a hand bell designed from forged iron. Other instruments include the opi (a wind instrument similar to the flute), igba, and ichaka. A widely popular musical form among the Igbo and throughout West Africa is Highlife, a fusion of jazz and traditional music. The modern Igbo Highlife is seen in the works of Dr. Sir Warrior, Oliver De Coque, Bright Chimezie, and Chief Osita Osadebe, who were among the most popular Igbo Highlife musicians of the 20th century.

It is almost impossible to describe a general Igbo art style due to the heavy fragmentation of the Igbo people. This has added to the development of a great variety of art styles and cultural practices. Igbo art is generally known for various types of masquerades, masks, and clothing symbolizing people, animals, or abstract conceptions.

Bronze castings found in the town of Igbo Ukwu from the 9th century constitute the earliest sculptures discovered in Igboland. Here, the grave of a well-established man of distinction and a ritual store, dating from the 9th century CE, contained both chased copper objects and elaborate castings of leaded bronze. Along with these bronzes were 165,000 glass beads said to have originated in Egypt, Venice, and India. Some popular Igbo art styles include Uli designs. 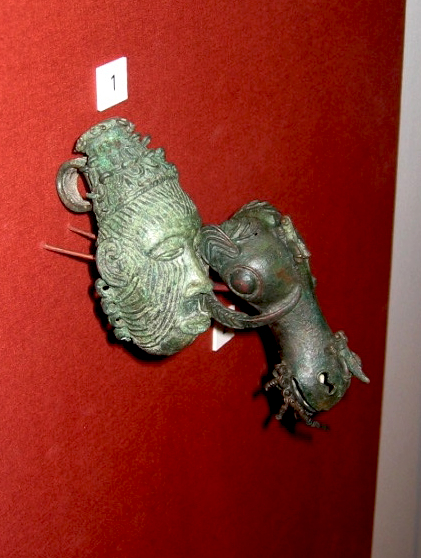 Igbo bronzes: Bronze from the 9th century town of Igbo Ukwu, now at the British Museum.

Masking is one of the most common art styles in Igboland and is linked strongly with Igbo traditional music. A mask can be made of wood or fabric, along with other materials, including iron and vegetation. Masks have a wide variety of uses, mainly in social satires, religious rituals, secret society initiations (such as the Ekpe society), and public festivals, which now include Christmas celebrations. Best known are the Agbogho Mmuo (meaning “maiden spirit”) masks of the Northern Igbo, which represent the spirits of deceased maidens and their mothers, symbolizing beauty. 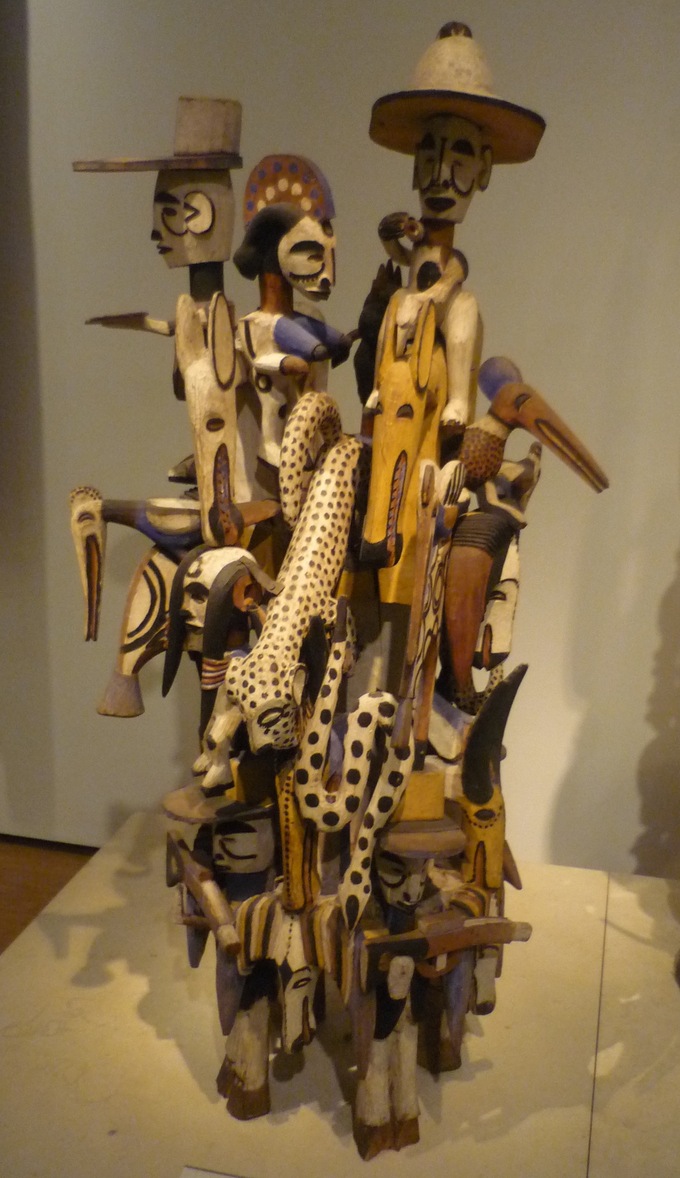 Igbo art is also famous for Mbari architecture. Mbari houses of the Owerri-Igbo are large, opened-sided, square planned shelters. They house many life-sized, painted figures (sculpted in mud to appease the Alusi, a deity, and Ala, the earth goddess, with other deities of thunder and water). Other sculptures are of officials, craftsmen, foreigners (mainly Europeans), animals, legendary creatures, and ancestors. Mbari houses take years to build in what is regarded as a sacred process. When new ones are constructed, old ones are left to decay. Everyday houses were made of mud and thatched roofs with bare earth floors and carved design doors. Some houses had elaborate designs both in the interior and exterior, including Uli art designed by Igbo women.

One of the unique structures of Igbo culture was the Nsude Pyramids, at the town of Nsude, in Abaja, northern Igboland. Ten pyramidal structures were built out of clay and mud. The first base section was 60 feet in circumference and 3 feet in height; the next stack was 45 feet in circumference. Circular stacks continue until they reached the top. The structures were laid in groups of five parallel to each other and served as temples for the god Ala/Uto, who was believed to reside at the top of the pyramids. Because they were built of clay and mud, time has taken its toll on the monuments, requiring periodic reconstruction.