Many books of worship produced during the Romanesque period were characterized by illuminated manuscript.

Illuminated Manuscripts in the Romanesque Period

A number of regional schools of art converged during the early Romanesque period and influenced the production of illuminated manuscripts and illustrated books. The “Channel school” of England and Northern France was heavily influenced by late Anglo-Saxon art, whereas the style in southern France depended more on Iberian influence. In Germany and the Low Countries, Ottonian styles continued to develop; these styles, along with Byzantine schools, in turn influenced Italy. By the 12th century reciprocal influences had developed among all these schools, although a degree of regional distinctiveness remained.

Romanesque illumination and illustrated books focused on the Bible, with each book prefaced by a large historiated initial, and the Psalter, where major initials were similarly illuminated. In both cases, more lavish examples contained cycles of scenes in fully-illuminated pages, sometimes with several scenes per page. The Bibles in particular often featured large pages and might be bound into more than one volume . Well-known examples of manuscripts from this era include the St. Alban’s Psalter, Hunterian Psalter, Winchester Bible (the “Morgan Leaf”), Fécamp Bible, Stavelot Bible, and Parc Abbey Bible.

By the end of the period, commercial artist and scribe workshops were significant and illumination (and books in general) became more widely available to both lay people and clergy.

St. Alban’s Psalter, also known as the Albani Psalter or the Psalter of Christina of Markyate, is an English illuminated manuscript and one of several psalters created at or for St Alban’s Abbey in the 12th century. It is widely considered one of the most important examples of English Romanesque book production, featuring unprecedented lavishness of decoration, with over 40 full-page miniatures and contains a number of iconographic innovations that endured throughout the Middle Ages . 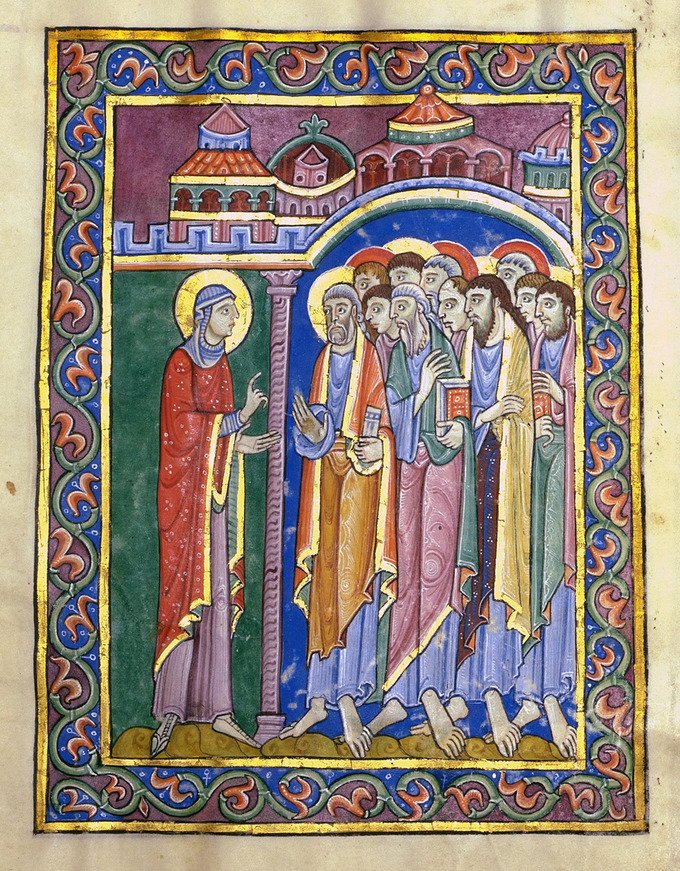 Also known as the York Psalter, the Hunterian Psalter is an illuminated manuscript produced in England around 1170 and considered a striking example of the Romanesque style. The book opens with an illustrated calendar, and each month begins with the historiated letters “KL”, an abbreviation for kalenda (i.e. the first day of the month). Next is 13 pages of prefactory full-page miniatures with two scenes to a page: three pages of Old Testament scenes, six pages of scenes from the Life of Christ (though further pages are perhaps missing), and unusually for this date, three pages from the Life of the Virgin, including a Death of the Virgin with a funeral procession and an Assumption. 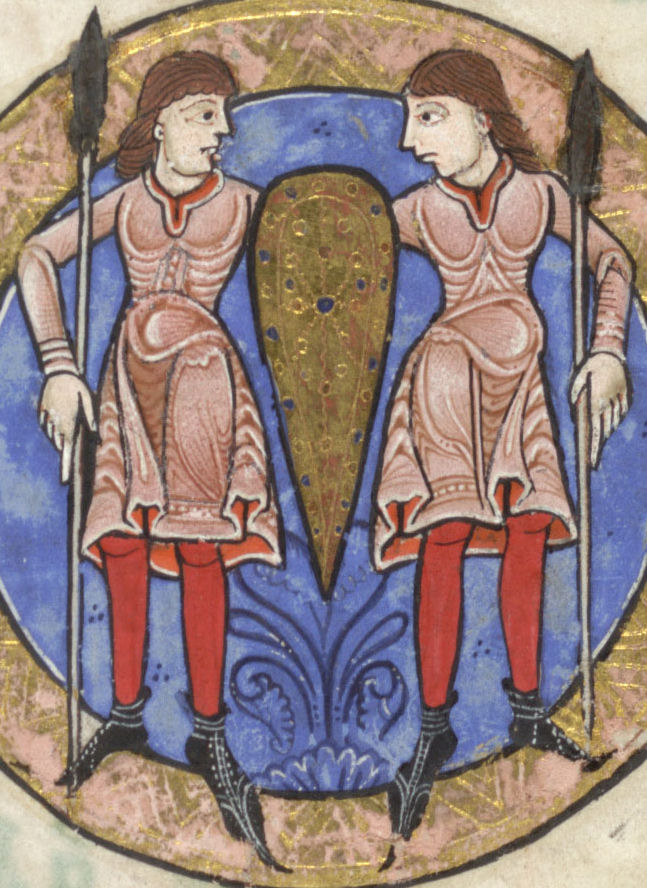 Hunterian Psalter: Depiction of the astrological sign Gemini, featuring the twins Castor and Pollux. The Hunterian Psalter was produced in England around 1170 and is considered a striking example of this Romanesque style.

These are the earliest English miniatures to have gold-leaf backgrounds incised with patterns of lines and dots. After these pages come two full-page miniatures of David playing his harp and a “Beatus” initial for the start of Psalm 1 (“Beatus vir”). All the psalms have a large illuminated initial, often historiated, and each verse starts with an enlarged gold initial. The start of the 10 traditional divisions of the text have especially large initials, typical for this style.

The Winchester Bible is a Romanesque illuminated manuscript produced in Winchester between 1160 and 1175. With folios measuring 583 x 396 mm (23 x 16 inches), it is the largest surviving 12th-century English Bible.

Winchester Bible: A scene depicting God addressing Jeremiah. During the Romanesque period, the focus of major illumination in the West moved from the Gospel Book to the Psalter and the Bible, and the Winchester manuscript is one of the most lavish examples.

During the Romanesque period, the focus of major illumination in the West moved from the Gospel Book to the Psalter and the Bible, and the Winchester manuscript is one of the most lavish examples. The artwork is incomplete; many illuminations were left unfinished and others were deliberately removed. The illuminations appear in varying stages of completion, ranging from rough outlines and inked drawings to unpainted gilded images and figures complete in all but the final details. In all, 48 of the major historiated initials that begin each book stand complete.

The Fécamp Bible is an illuminated Latin Bible produced in Paris during the third quarter of the 13th century. Each book of the Bible and the major sections of Psalms are introduced by a large historiated initial in colors and gold, with the exception of the books of Deuteronomy, Isaiah, and Haggai. In all, there are 79 extant historiated initials. The beginnings of the prologues have large zoomorphic and foliate initials. The beginning of each chapter is marked by a small initial in red with blue-pen flourishes or in blue with red-pen flourishes. 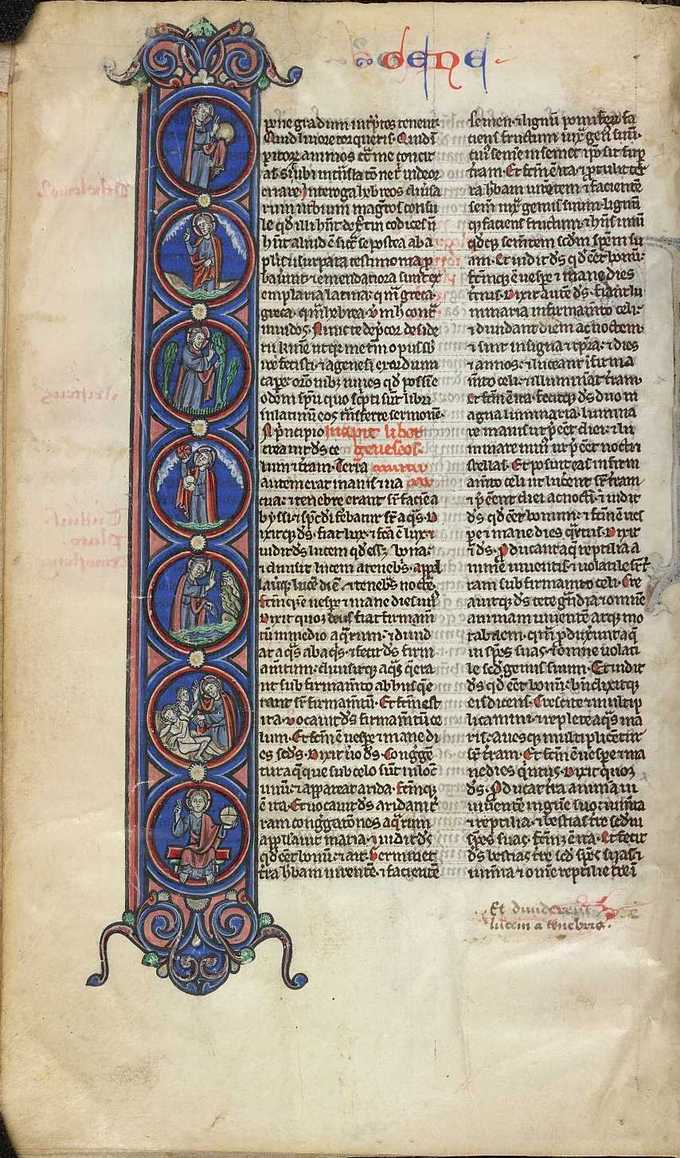 A page from the Fécamp Bible: The Fécamp Bible is an illuminated Latin Bible produced in Paris during the late 13th century. This page showcases the striking blue and red flourishes.

Give examples of Romanesque painting and art in France and Spain

Romanesque painting and other art forms were greatly influenced by Byzantine art and the anti-classical energy of the Insular art of the British Isles. From these elements was forged a highly innovative and coherent style in illumination, painting, and stained glass.

The large wall surfaces and plain, curving vaults of the architecture of the Romanesque period lent themselves to elaborate wall paintings and mural decorations. Unfortunately, many of these early wall paintings have been destroyed by dampness, and in some cases the walls have been replastered and painted over. In England, France, and the Netherlands, such pictures were systematically destroyed or whitewashed in bouts of iconoclasm during the Reformation . In Denmark and elsewhere, many have since been restored. In Catalonia (Spain), there was a national campaign to save such murals in the early 20th century by transferring them to safekeeping in Barcelona, resulting in the spectacular collection at the National Art Museum of Catalonia. In other countries, Romanesque wall paintings have suffered from war, neglect, and changing fashion.

A classic scheme for the painted decoration of a church was derived from earlier examples, often in mosaic . At its focal point in the semi-dome of the apse , it commonly presented either Christ in Majesty or Christ the Redeemer enthroned within a mandorla and framed by the four winged beasts, symbols of the Four Evangelists. These iconographic images compared directly with examples from the gilt covers or illuminations of Gospel Books of the period. If the Virgin Mary was the patron saint of the church, she might replace Christ in the apse. On the apse walls below were saints and apostles, often including narrative scenes. On the sanctuary arch were figures of apostles, prophets, or the 24 elders of the Apocalypse, looking toward a bust of Christ or his symbol the Lamb at the top of the arch. The north wall of the nave often contained narrative scenes from the Old Testament while the south wall was dedicated to scenes from the New Testament. On the rear west wall was a Last Judgement with an enthroned and judging Christ at the top. 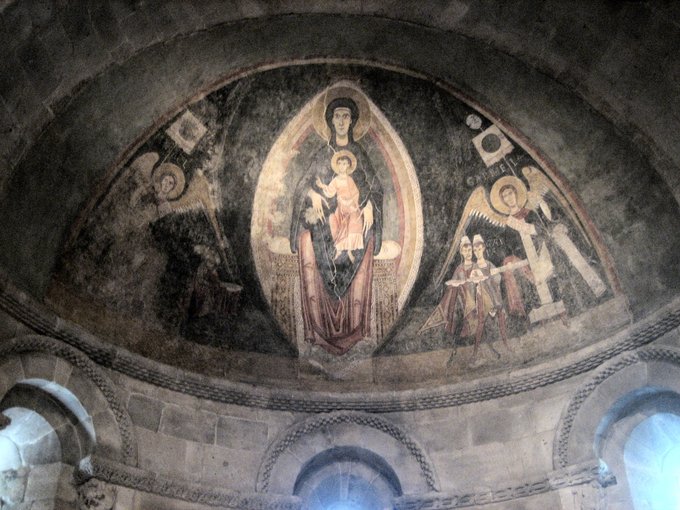 One of the most intact schemes still in existence is at Saint-Savin-sur-Gartempe in France. The long barrel vault of the nave provides an excellent surface for fresco and is decorated with scenes of the Old Testament, showing the Creation, the Fall of Man, and other stories. The paintings include a lively depiction of Noah’s Ark, complete with a fearsome figurehead and numerous windows through which can be seen Noah and his family on the upper deck, birds on the middle deck, and pairs of animals on the lower deck. Another scene shows the swamping of Pharaoh’s army by the Red Sea. The scheme extends to other parts of the church, with the martyrdom of the local saints shown in the crypt and the Apocalypse shown in the narthex . The range of colors is limited to light blue-green, yellow ochre , reddish brown, and black. Similar paintings exist in Serbia, Spain, Germany, Italy, and elsewhere in France. 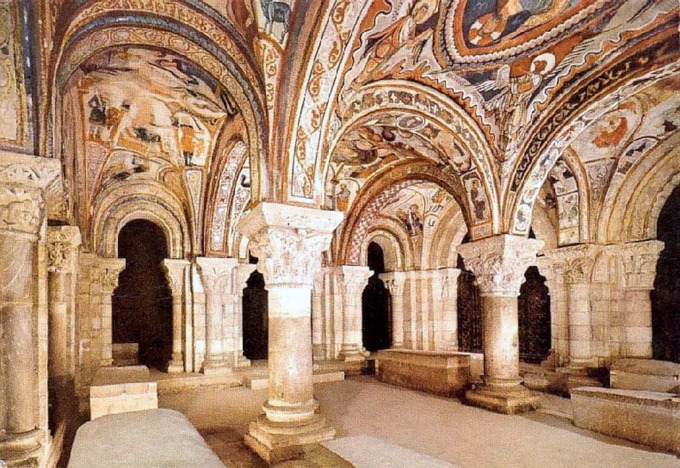 The oldest-known fragments of medieval pictorial stained glass appear to date from the 10th century. The earliest intact figures include five prophet windows at Augsburg dating from the late 11th century. The figures, though stiff and formalized, demonstrate considerable proficiency in design, both pictorially and in the functional use of the glass, indicating that their maker was well-accustomed to the medium.

Glass craftsmen were slower than architects to change their style, so much glasswork from the first part of the 13th century is essentially Romanesque. Large figures from the Strasbourg Cathedral, created in about 1200, are of especially fine quality. Some of these have been removed to museums for protection and better viewing. Other exceptional stained glass examples can be found at Saint Kunibert’s Church in Cologne, made around 1220. Most of the magnificent stained glass of France, including the famous “Tree of Jesse” window of Chartres Cathedral, dates from the 13th century. Glass was both expensive and fairly adaptable in that it could be added to or rearranged, and it was often reused when churches were rebuilt in the Gothic style.