Crafts in the Cook Islands

The Cook and Marquesas Islands, located in the South Pacific, are known for their woodcarving, weaving, quilts, and tattooing.

The Cook Islands are a parliamentary democracy in the South Pacific Ocean in free association with New Zealand, composed of 15 small islands whose total land area is 92.7 square miles. Although Cook Islanders are citizens of New Zealand, they have the status of Cook Islands nationals, which is not given to other New Zealand citizens. The Cook Islands were first settled in the 6th century CE by Polynesian people who migrated from nearby Tahiti to the southeast. British navigator Captain James Cook arrived in 1773 and 1777 and named the islands the Hervey Islands; the name “Cook Islands,” in honor of Cook, appeared on a Russian naval chart published in the 1820s.

Woodcarving in the Cook Islands

Woodcarving is a common art form in the Cook Islands. The proximity of islands in the southern group helped produce a homogeneous style of carving; however, each island developed its own characteristics within this style. Rarotonga is known for its fisherman’s gods and staff-gods; Atiu for its wooden seats; Mitiaro, Ma’uke, and Atiu for mace and slab gods; and Mangaia for its ceremonial adzes. Mangaia is the source of many fine adzes carved in a distinctive, idiosyncratic style with the so-called double-k design, and it also produces food pounders carved from the heavy calcite found in its extensive limestone caves. Most of the original wood carvings were either taken by early European collectors or were burned in large numbers by European missionaries. 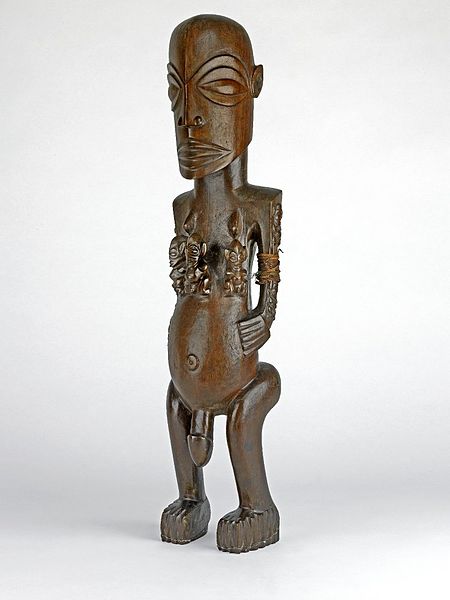 Cook Islands carved wood figure, British Museum: The Cook Islands were regarded for their fine wood carvings, many of which were taken or destroyed by European missionaries.

Craftwork in the Cook Islands

Today, carving is no longer the major art form with the same spiritual and cultural emphasis given to it by the Maori in New Zealand. However, there are continual efforts to interest young people in their heritage. The island Atiu, in particular, has a strong tradition of crafts both in carving and local fiber arts such as tapa. The outer islands produce traditional weaving of mats, basketware, and hats. Particularly fine examples of rito hats are worn by women to church, which are made from the uncurled immature fibre of the coconut palm. The Polynesian equivalent of Panama hats, they are highly valued and are keenly sought by Polynesian visitors from Tahiti. Often, they are decorated with hatbands made of minuscule pupu shells that are painted and stitched on by hand. Although pupu are found on other islands, the collection and use of them in decorative work has become a specialty of Mangaia. The weaving of rito is a specialty of the northern island of Penrhyn. 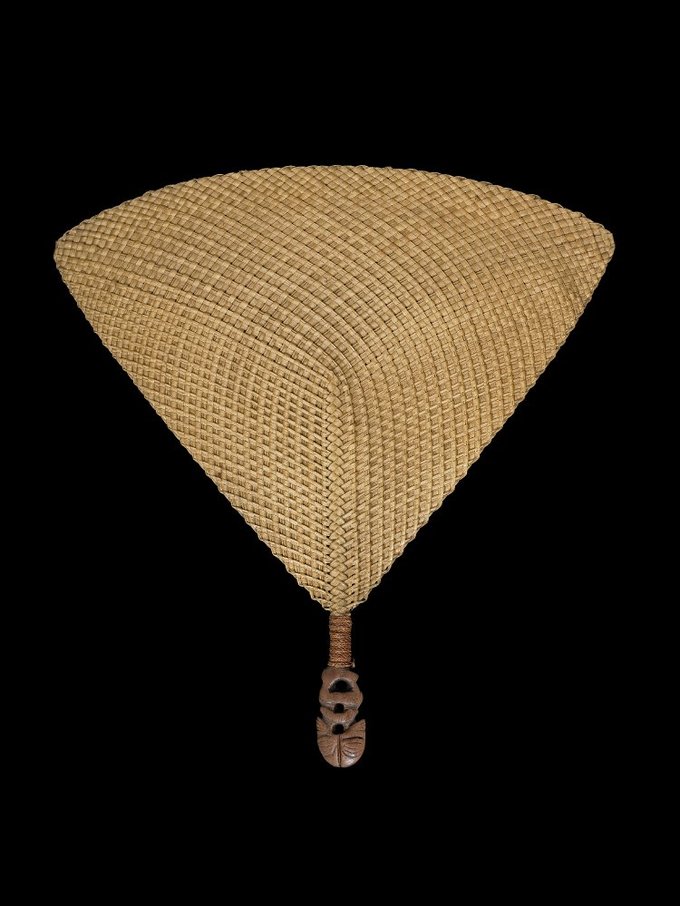 Weaving in the Cook Islands: Weaved hand fan with a carved figure handle.

Another popular art form in the Cook Islands is tivaevae—the art of handmade Island scenery patchwork quilts. Introduced by the wives of missionaries in the 19th century, the craft grew into a communal activity, which is probably one of the main reasons for its popularity. By custom, a tivaevae is not measured by monetary value nor production cost; its value is said to be reflected by the love and patience that the creator(s) have put into making a stunning work of art. Cook Islands women often described their tivaevae as being “something from the heart.” 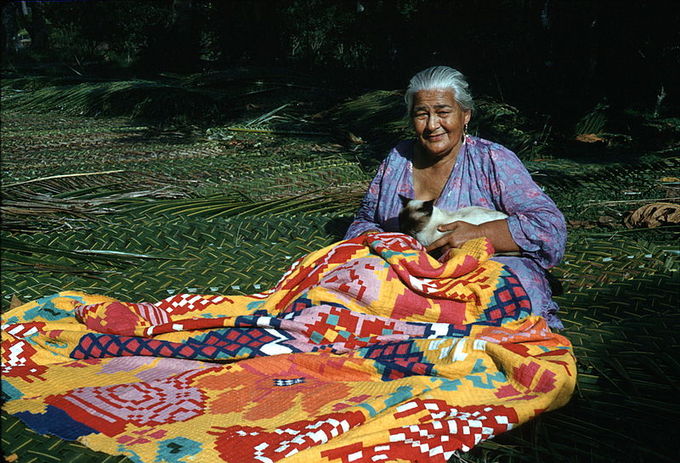 Woman sewing a tivaevae, Rarotonga: Tivaevae, the art of handmade patchwork quilts, is not measured by monetary value or production cost, but rather is valued for the love and patience that the creator(s) have put into making a stunning work of art.

The Marquesas Islands are a group of volcanic islands in French Polynesia, an overseas collectivity of France in the southern Pacific Ocean. The Islands form one of the five administrative divisions of French Polynesia. In the history of the Marquesas Islands, the first recorded settlers were Polynesians, who, from archеological evidence, are believed to have arrived before 100 CE. Ethnological and linguistic evidence suggests that they likely arrived from the region of Tonga and Samoa. The islands were given their name by the Spanish explorer Álvaro de Mendaña de Neira, who reached them on 21 July 1595. Much of Polynesia, including the original settlers of Hawaii, Tahiti, Rapa Iti, and Easter Island, was settled by Marquesans who were believed to have departed from the Marquesas as a result of overpopulation and drought-related food shortages. Much of the rest of Polynesia was colonized by Marquesan descendants centered in Tahiti.

These islands share similar artistic traditions of other Pacific Islands, including the art of tattooing. The Marquesas have a long history of complex geometric tattooing, covering the whole bodies of both men and women. Today, Marquesan culture is a mélange created by the layering of the ancient Marquesan culture, with strong influences from the important Tahitian culture and the politically important French culture.

Easter Island is a Polynesian island in the southeastern Pacific Ocean, located at the southeasternmost point of the Polynesian Triangle. A special territory of Chile that was annexed in 1888, Easter Island is famous for its 887 extant monumental statues, called moai, created by the early Rapa Nui people. It is a UNESCO World Heritage Site, with much of the island protected within Rapa Nui National Park. In recent times, the island has served as a warning of the cultural and environmental dangers of exploitation. Ethnographers and archaeologists also blame diseases carried by European sailors and Peruvian slave raiding of the 1860s for devastating the local peoples. 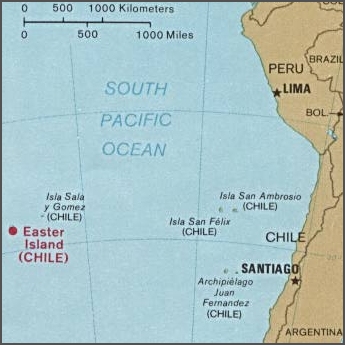 The Rapa Nui people had a Stone Age culture that made extensive use of several different types of local stone, including basalt, obsidian, red scoria, and tuff. The large stone statues for which Easter Island is world-famous, known as moai, were carved from 1100–1680 CE. A total of 887 monolithic stone statues have been inventoried on the island and in museum collections so far. Although often identified as “Easter Island heads,” most of the statues have torsos and end at the top of the thighs, and a small number are complete with the figures kneeling on bent knees and their hands over their stomachs. Almost all moai (roughly 95%) were carved out of distinctive, compressed, and easily worked solidified volcanic ash or tuff found at a single site inside the extinct volcano Rano Raraku. The native islanders who carved them used only stone hand chisels; while many teams worked on different statues at the same time, a single moai took a team of five or six men approximately one year to complete. Each statue represented the deceased head of a lineage.

The Rapa Nui are also know for their construction of ahu, or stone platforms, many of which (approximately 125 of the 313 known ahu) carry moai. Ahu Tongariki, one kilometer from Rano Raraku, had the most and tallest moai of any of the ahu. These stone platforms evolved from the traditional Polynesian marae. In this context, ahu referred to a small structure sometimes covered with a thatched roof where sacred objects, including statues, were stored. The ahu were usually adjacent to the marae, or main central court where ceremonies took place. On Easter Island, both ahu and moai evolved to a much greater size. Ahu are found mostly on the coast, where they are distributed fairly evenly, except on the western slopes of Mount Terevaka and the Rano Kau and Poike headlands. 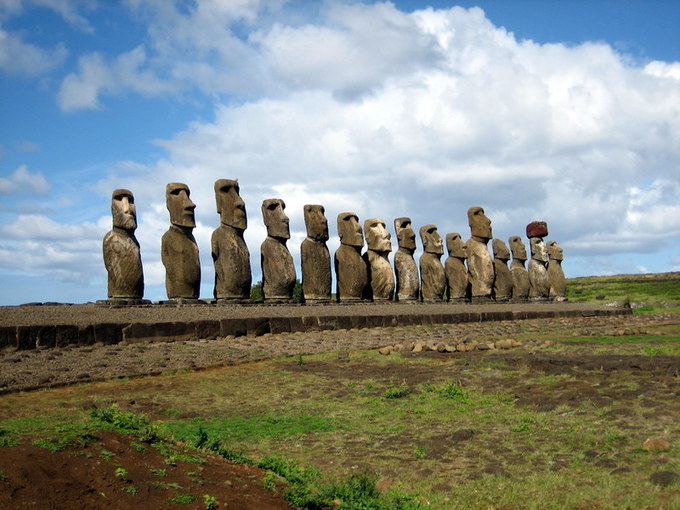 One of the highest-quality examples of Easter Island stone masonry is the rear wall of the ahu at Vinapu. Made without mortar by shaping hard basalt rocks of up to seven tons to match each other exactly, it has a superficial similarity to some Inca stone walls in South America.

Houses of the Rapa Nui

Two types of houses are known to have existed in Easter Island History: hare paenga, a house with an elliptical foundation made with basalt slabs and covered with a thatched roof that resembled an overturned boat, and hare oka, a round stone structure. Related stone structures called tupa look very similar to the hare oka, except that the tupa were inhabited by astronomer-priests and located near the coast, where the movements of the stars could be easily observed. Settlements also contain hare moa, or oblong stone structures that were used to house chickens. The houses at the ceremonial village of Orongo are unique in that they are shaped like hare paenga but are made entirely of flat basalt slabs found inside the Rano Kao crater. The entrances to all the houses are very low, requiring a person to crawl in order to enter.

Easter Island has one of the richest collections of petroglyphs in all Polynesia, with over 4,000 petroglyphs cataloged. Designs and images were carved out of rock for a variety of reasons, including to create totems, to mark territory, or to memorialize a person or event. There are distinct variations around the island in terms of the frequency and particular themes among petroglyphs, with a concentration of Birdmen at Orongo. Other subjects include sea turtles, Komari (vulvas), and Makemake, the chief god of the Tangata manu or Birdman cult.

Easter Island once had an apparent script called rongorongo. Glyphs include pictographic and geometric shapes; the texts were incised in wood in reverse boustrophedon direction. It was first reported by a French missionary, Eugène Eyraud, in 1864. At that time, several islanders said they could understand the writing, but according to tradition, only ruling families and priests were ever literate, and none survived the slave raids and subsequent epidemics. Despite numerous attempts, the surviving texts have not been deciphered, so it is not certain that they were actually writing.