Sculpture of the Northern Renaissance

Wood Sculpture in the Northern Renaissance

The sculpture of Veit Stoss and Tilman Riemenschneider show the evolution from the Gothic style to the styles of the Renaissance.

The late 15th and early 16th centuries mark the transition in wood sculpture from the International Gothic to a more classical style of the Renaissance. Often seen as a revival of the classical style, the International Gothic is defined by a dignified elegance, which replaces monumentality, along with rich decorative coloring, elongated figures, and flowing lines . It also makes a more practiced use of perspective , modeling, and setting.

Through commerce and individual travel, the classical and Mannerist styles from the Italian peninsula began to make their way north. The classical style recaptures the naturalism of Graeco-Roman art, with attention to features of the body and expressive restraint. Artists working in this style often employed live models to ensure a realistic appearance of their productions. On the other hand, the Mannerist, or Late Renaissance, style jettisoned the live model and aimed for more expressive figures, resulting in heightened emotion and drama and sometime artificially elongated and ill-proportioned bodies. The wood sculptures of the German-speaking states of this time display both Italian styles in addition to more traditional International Gothic elements.

Veit Stoss (1450–1533), Tilman Riemenschneider (1460–1531), and Peter Vischer the Elder (1455–1529) are the most famous among the wood carvers of the German-speaking states of the Northern Renaissance. Their long careers covered the transition between the Gothic and Renaissance periods, although their ornamentation often remained Gothic even after their compositions began to reflect Renaissance principles.

Veit Stoss was a leading German sculptor, mostly working in wood, whose career covered the transition between the late Gothic and the Northern Renaissance. His style emphasizes pathos, often conveyed by tilted heads, downcast eyes, expressive or introspective countenances, and dynamic poses. His virtuoso carving of billowing drapery helps to underscore this sense of emotion. He had a large workshop, and in addition to his own works there are a number by pupils. He is best known for the colossal polychromatic altarpiece in St. Mary’s Basilica in Kraków, Poland, produced in collaboration with his son Stanislaw. Completed in 1489, the altarpiece was the largest triptych of its time. Its use of drama through gilding, diagonal lines, and expressive body language convey Stoss’s loyalty to the International Gothic style, while its naturalistic bodies and drapery point to an adoption of Renaissance attributes. 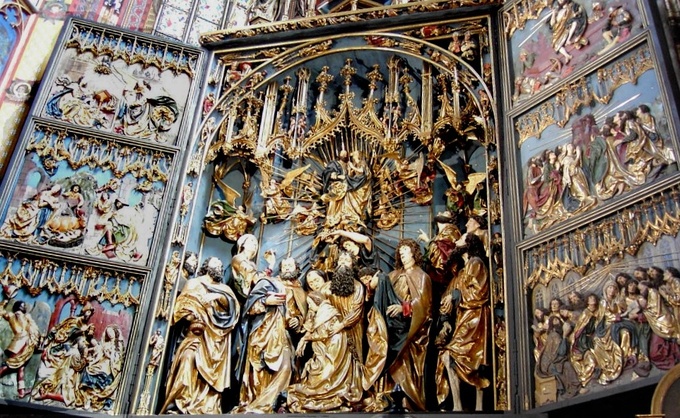 Gothic Altar by Veit Stoss: The altar at in Kraków was not completed until 1489, and was the largest triptych of its time. Like his other large works, it required a large workshop including specialized painters and gilders.

Better known for his polychromatic sculptures, Stoss also left some sculptures unpainted, as became the preferred appearance for a brief time in the early 16th century. This can be seen in Tobias and the Angel (c. 1504–06), a commission for Bamberg Cathedral . Like his painted sculptures, Tobias and the Angel retains Stoss’s signature expressive countenances and body language. 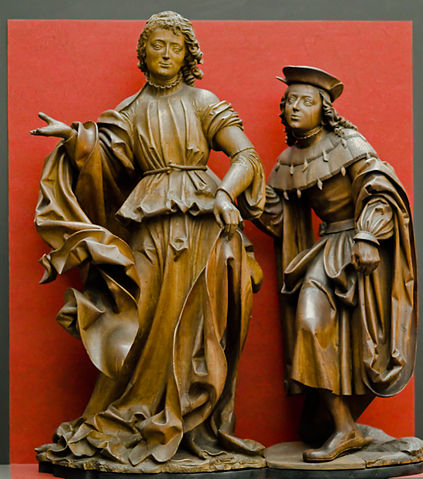 Tilman Riemenschneider was active in Würzburg from 1483. He was one of the most prolific and versatile sculptors of the transition period between late Gothic and Renaissance, a master in stone and limewood. His work is characterized by the expressiveness of the figurines ‘ faces (often shown with an inward look) and by their detailed and richly folded clothing. The emphasis on expression of inner emotions sets Riemenschneider’s work apart from that of his immediate predecessors.

Riemenschneider’s early success as a sculptor was due to the plasticity of his works, with great care in the modeling of garments. This way of sculpting the garments as well as the typical oval faces and almond-shaped eyes were modeled on art from the Upper Rhine region of the 1470s, implying that Riemenschneider might have learned his trade either there or at Ulm. Later works lost some of the volume of the early sculptures, allowing a more efficient production. While his earlier styles convey a strong Gothic influence, his mature style shows Mannerist characteristics.

Reimenschneider’s tomb of Lorenz von Bibra, the Prince-Bishop of Würzburg, is considered a transition work from the Gothic to the Renaissance style. Here, the figure of the interred is depicted with veristic “warts-and-all” realism , shown in his gaunt cheeks and double chin. Such attributes are reminiscent of the Roman Republic. While the top half of his body is masked in his heavy drapery (a hallmark of many medieval styles), the lower half depicts the contours of his legs, acknowledging the body beneath the garments (a hallmark of classicism). Likewise, his hands, drapery folds, sword, and scepter are rendered in a realistic manner.