Art of the Aegean Civilizations

Sculpture of the Cyclades

Cycladic art during the Greek Bronze Age is noted for its abstract, geometric designs of male and female figures.

Discuss the form and function of the Cycladic marble figurines

The Cyclades are a group of Greek islands in the Aegean Sea that encircle the island of Delos. The islands were known for their white marble, mined during the Greek Bronze Age and throughout Classical history.

Their geographical location placed them, like the island of Crete, in the center of trade between Greece, Egypt, Asia Minor, and the Near East. The indigenous civilization on the Cyclades reached its high point during the Bronze Age. The islands were later occupied by the Minoans, Mycenaeans, and later the Greeks. 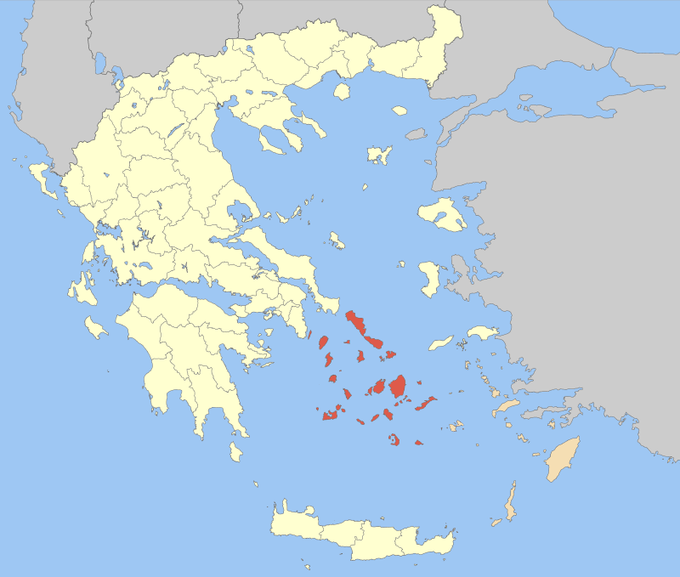 Cycladic art is best known for its small-scale, marble figurines. From the late fourth millennium BCE to the early second millennium BCE, Cycladic sculptures went through a series of stylistic shifts, with their bodily forms varying from geometric to organic. The purpose of these figurines is unknown, although all that have been discovered were located in graves. While it is clear that they were regularly used in funerary practices, their precise function remains a mystery.

Some are found in graves completely intact, others are found broken into pieces, others show signs of being used during the lifetime of the deceased, but some graves do not contain the figurines. Furthermore, the figurines were buried equally between men and women. The male and female forms do not seem to be identified with a specific gender during burial. These figures are based in simple geometric shapes.

The abstract female figures all follow the same mold. Each is a carved statuette of a nude woman with her arms crossed over her abdomen. The bodies are roughly triangular and the feet are kept together. The head of the women is an inverted triangle with a rounded chin and the nose of the figurine protrudes from the center.

Each figure has modeled breasts, and incised lines draw attention to the pubic region with a triangle. The swollen bellies on some figurines might indicate pregnancy or symbolic fertility. The incised lines also provide small details, such as toes on the feet, and to delineate the arms from each other and the stomach.

Their flat back and inability to stand on their carved feet suggest that these figures were meant to lie down. While today they are featureless and remain the stark white of the marble, traces of paint allow us to know that they were once colored. Paint would have been applied on the face to demarcate the eyes, mouth, and hair. Dots were used to decorate the figures with bracelets and necklaces. 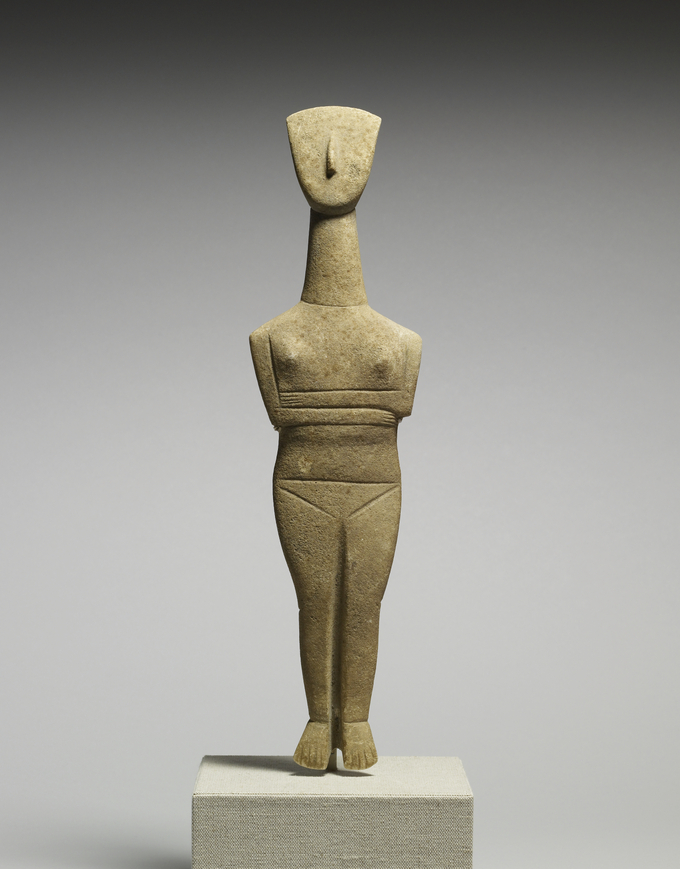 Male figures are also found in Cycladic grave sites. These figures differ from the females, as the male typically sits on a chair and plays a musical instrument, such as the pipes or a harp. Harp players, like the one in the example below, play the frame harp, a Near Eastern ancestor of the modern harp.

The figures, their chairs, and instruments are all carved into elegant, cylindrical shapes. Like the female figures, the shape of the male figure is reliant on geometric shapes and flat planes . The incised lines provide details (such as toes), and paint added distinctive features to the now-blank faces. 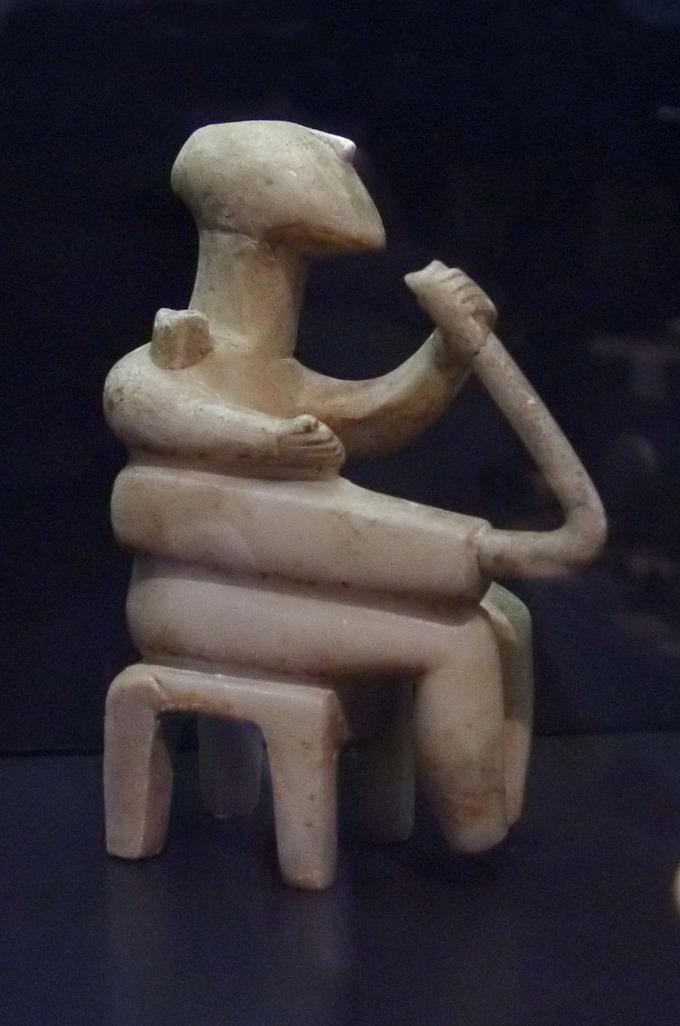 While reclining female and seated male figurines are the most common Cycladic sculptures discovered, other forms were produced, such as animals and abstracted humanoid forms. Examples include the terra cotta figurines of bovine animals (possibly oxen or bulls) that date to 2200–2000 BCE, and small, flat sculptures that resemble female figures shaped like violins; these date to the Grotta–Pelos culture , also known as Early Cycladic I (c. 3300–2700 BCE). Like other Cycladic sculptures discovered to date, the purposes of these figurines remain unknown. 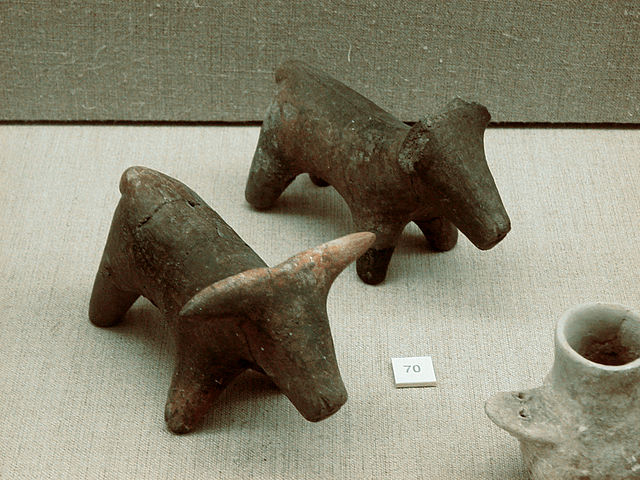 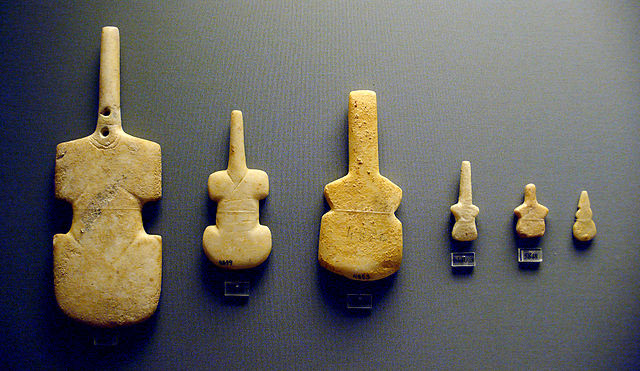 Violin-shaped female figurines (c. 3300–2700 BCE): These flat, abstracted figurines of the female body provide one example of how its representation evolved in Cycladic art.