Pottery in the Greek Geometric Period

The Geometric period in Greek art is distinguished by a reliance on geometric shapes to create human and animal figures as well as abstract décor.

In the eleventh century BCE, the citadel centers of the Mycenaeans were abandoned and Greece fell into a period with little cultural or social progression. Signs of civilization including literacy, writing, and trade were lost and the population on mainland Greece plummeted.

During the Proto-Geometric period (1050–900 BCE), painting on ceramics began to re-emerge. These vessels were only decorated with abstract geometric shapes adopted from Mycenaean pottery. Ceramicists began using the fast wheel to create vessels, which allowed for new monumental heights. 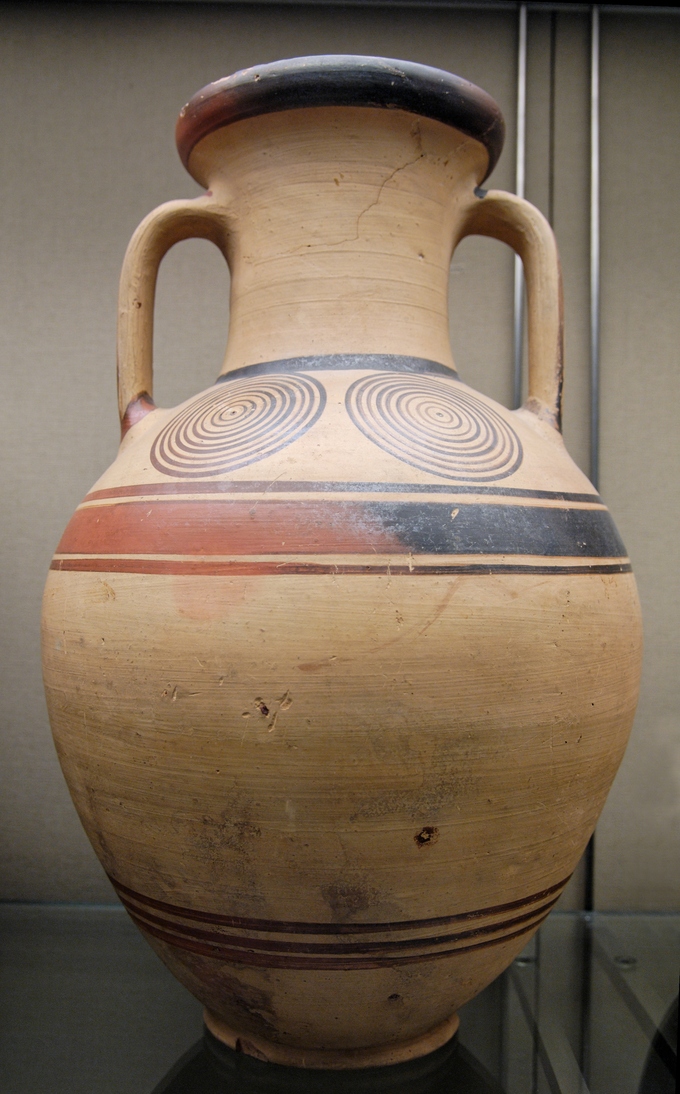 In the Geometric period that followed, figures once more became present on the vessel. The period lasted from 900 to 700 BCE and marked the end of the Greek Dark Ages. A new Greek culture emerged during this time. The population grew, trade began once more, and the Greeks adopted the Phoenician alphabet for writing.

Unlike the Mycenaeans, this culture was more focused on the people of the polis , which is reflected in the art of this period. The period gets its name from the reliance on geometric shapes and patterns in its art, and even their use in depicting both human and animal figures.

The city of Athens became the center for pottery production. A potter’s quarter in the section of the city known as the Kerameikos was located on either side of the Dipylon Gate, one of the city’s west gates. The potters lived and work inside the gate in the city, while outside the gate, along the road, was a large cemetery.

In the Geometric period, monumental-sized kraters and amphorae up to six feet tall were used as grave markers for the burials just outside the gate. Kraters marked male graves, while amphorae marked female graves.

The Dipylon Master, an unknown painter whose hand is recognized on many different vessels, displays the great expertise required for decorating these funerary markers. The vessels were first thrown a wheel, an important technological development at the time, before painting began. Both the Diplyon Krater and Dipylon Amphora demonstrate the main characteristics of painting during this time.

For one, the entire vessel is decorated in a style known as horror vacui, a style in which the entire surface of the medium is filled with imagery. A decorative meander is on the lip of the krater and on many registers of the amphora. This geometric motif is constructed from a single, continuous line in a repeated shape or motif.

The main scene is depicted on the widest part of the pot’s body. These scenes relate to the funerary aspect of the pot and may depict mourners, a prothesis (a ritual of laying the body out and mourning), or even funerary games and processions.

On the Dipylon Krater, two registers depict a processional scene, an ekphora, (the transportation of the body to the cemetery) and the prothesis. The dead man of the prothesis scene is seen on the upper register. He is laid out on a bier and mourners, distinguished by their hands tearing at their hair, surround the body. Above the body is a shroud, which the artist depicts above and not over the body in order to allow the viewer to see the entirety of the scene.

On the register below, chariots and soldiers form a funerary procession. The soldiers are identified by their uniquely shaped shields. The Dipylon Amphora depicts just a prothesis in a wide a register around the pot.

In both vessels, men and women are distinguished by protruding triangles on their chest or waist to represent breasts or a penis. Every empty space in these scenes is filled with geometric shapes—M’s, diamonds, starbursts—demonstrating the Geometric painter’s horror vacui. 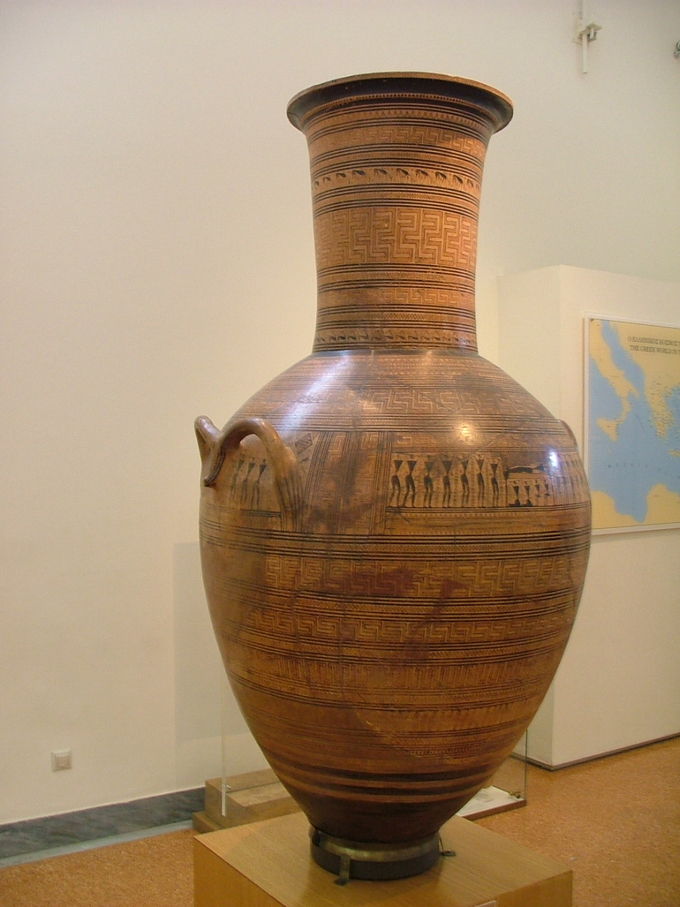 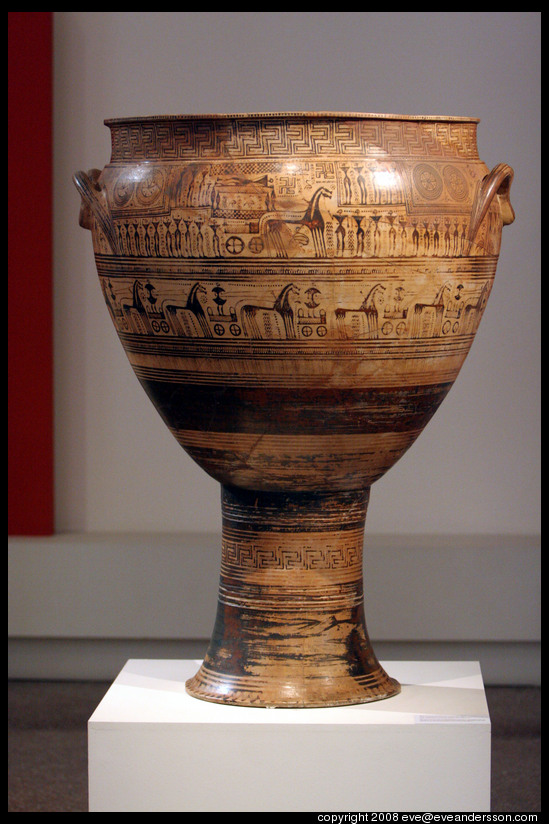 Sculpture in the Greek Geometric Period

Although derived from geometric shapes, the Ancient Greek sculptures of the Geometric period show some artistic observation of nature.

The ancient Greek sculptures of the Geometric period , although derived from geometric shapes, bear evidence of an artistic observation of nature in some circumstances. Small-scale sculptures, usually made of bronze, terra cotta, or ivory, were commonly produced during this time. Bronzes were made using the lost-wax technique, probably introduced from Syria, and were often left as votive offerings at sanctuaries such as Delphi and Olympia.

The human figures are made of a triangle as a torso that supports a bulbous head with a triangular chin and nose. Their arms are cylindrical, and only their legs have a slightly more naturalistic shape. These attributes can be seen in a small sculpture of a seated man drinking from a cup that displays the typical modeling figures as simple, linear forms that enclose open space . Especially noteworthy are his elongated arms that mirror the dimensions of his legs. 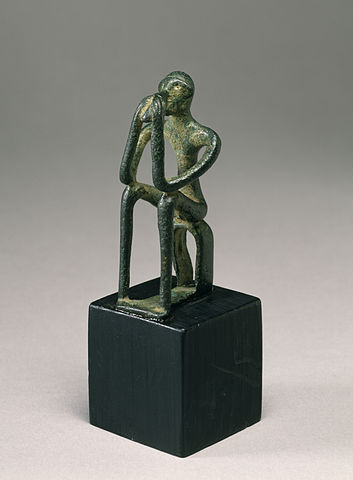 Seated Male Figure: This is made of bronze and created around 750–700 BCE. Note how the statue’s elongated arms mirror the dimensions of his legs.

A relatively naturalistic rendering of human legs is also evident in Man and Centaur, also known as Heracles and Nessos (c. 750–730 BCE). Without the equine back and hind legs, the centaur portion of the sculpture is a shorter man with human legs.

Like the seated man above, the two figures feature elongated arms, with the right arm of the centaur forming one continuous line with the left arm of the man. While the seated man appears to be clean shaven, the figures in Man and Centaur wear beards, which usually symbolized maturity. The hollow eye sockets of the figure of the man probably once held inlay for a more realistic appearance. 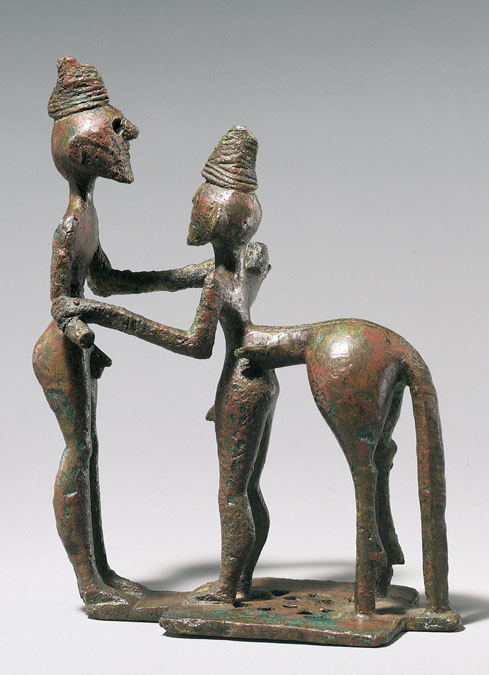 Man and Centaur (Heracles and Nessos) : This bronze statue was made around 750–730 BCE.

Animals, including bulls, deer, horses, and birds, were also based in geometry. Horse figurines were commonly used as offerings to the gods. The animals themselves became symbols of wealth and status due to the high cost of keeping them. Equine bodies may be described as rectangles pinched in the middle with rectangular legs and tail and are similar in shape to deer or bulls.

The heads of these mammals are more distinctive, as the horse’s neck arches , while the bull and deer have cylindrical faces distinguished by horns or ears. While the animals and people are based in basic geometric shapes, the artists clearly observed their subjects in order to highlight these distinguishing characters. 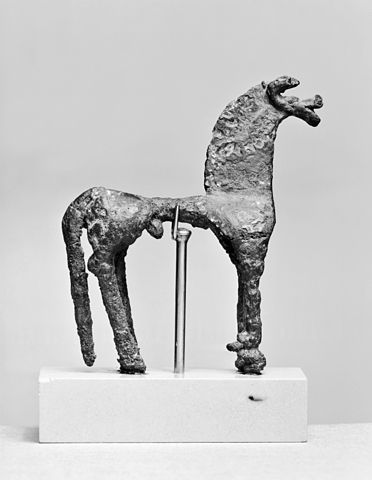