The Gothic Revival was an architectural movement beginning in England during the 1740s that sought to revive medieval forms.

The Gothic Revival was primarily an architectural movement that began in 1740s England. Also termed Victorian Gothic and Neo-Gothic, the style sought to revive medieval forms, much like the Neoclassical style sought to revive works from classical antiquity. During the 18th century, the ruins of medieval Gothic architecture began to receive newfound appreciation after having been relatively dismissed in the overall history of architecture. Some critics believe there was a kind of nostalgia for an enchanted, less rational world that was linked to the perceived superstitions of medieval Catholicism.

In England, the center of the Gothic revival, the movement was intertwined with philosophical trends associated with a reawakening of Christian traditions in response to the growth of religious nonconformism. Ultimately, the Gothic style became widespread in the third quarter of the 19th century. While the Neoclassical style of the 18th century was associated with “radical” and liberal perspectives, the Gothic Revival was associated with “traditional” sensibilities, such as conservatism and the monarchy. As industrialization progressed, there was an increasing reaction against the use of machinery and factory production. Supporters of medievalism criticized industrial society, believing the pre-industrial model to be a golden age.

Paralleling the ascendancy of Neo-Gothic styles in 19th century England, interest spread rapidly to Europe, Australia, South Africa, and the Americas. Indeed, the number of Gothic Revival and Carpenter Gothic structures built in the 19th and 20th centuries may exceed the number of authentic Gothic structures that had been built in Gothic’s original era. The Gothic Revival style is characterized by its stone and brick structures, many of which are religious in nature, as well as heavy decoration. The most fundamental element of the Gothic style of architecture is the pointed arch. Columns that support arches are smaller in Gothic buildings, and continue all the way to the roof, where they become part of the vault. In the vault, the pointed arch can be seen in three dimensions where the ribbed vaulting meets in the center of the ceiling of each bay. This ribbed vaulting is another distinguishing feature of Gothic architecture. The slender columns and lighter systems of thrust allowed for larger windows and more light in Gothic structures. The windows, tracery, carvings, and ribs make up a bewildering display of decoration where almost every surface is decorated with a profusion of shapes and patterns. Gothic revival cottages and smaller buildings also became popular and are referred to as “Carpenter Gothic.” These structures are defined by their use of Gothic elements such as pointed arches and steep gables.

A. W. N. Pugin was a prominent architect, designer, artist, and critic who was deeply involved in the Gothic Revival. The height of his work is seen in the interior design of the Palace of Westminster. Pugin designed many churches in England during his career and published a series of volumes of architectural drawings entitled Examples of Gothic Architecture and Specimens of Gothic Architecture that remained in print and were the standards for the Gothic Revival for the next century. 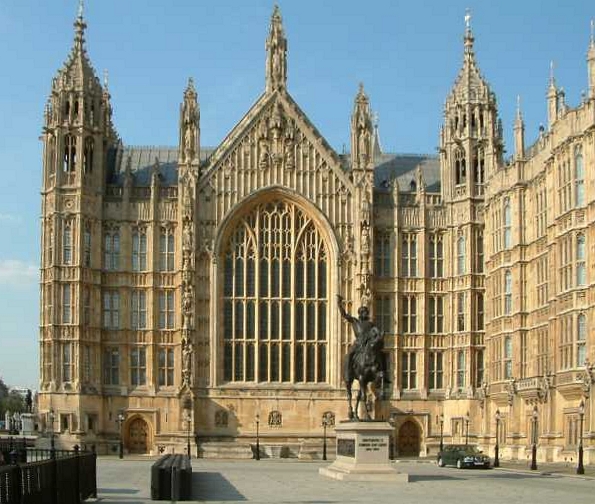 The Gothic Revival was supported by medievalism, which had its roots in antiquarian concerns of survivals (practices that continue from earlier times) and curiosities (unique or unusual objects). As industrialization progressed, there was a reaction against machine production and factories. Proponents of the picturesque, such as Thomas Carlyle and Augustus Pugin, took a critical view of industrial society and portrayed pre-industrial medieval society as a golden age. To Pugin, Gothic architecture was infused with the Christian values that had been supplanted by classicism and were being destroyed by industrialization.