The art of the Kamakura period reflected the introduction of the Pure Land School of Buddhism, which depicted the Amida Buddha.

Compare and contrast the art of the Pure Land, Zen, and Kei schools of the Kamakura period.

The Kamakura period in Japanese history (1185–1333 CE) was a period of crises in which control of the country moved from the imperial aristocracy to the samurai. The ascension of Minamoto Yoritomo to the title of Shogun following the Hōgen and Heiji rebellions and the victory of the Minamoto clan over the Taira marked the beginning of the Kamakura period. The era is sometimes called “the age of the warriors”; it is also, however, a time when exchanges with China’s Song dynasty continued and Buddhism greatly flourished.

This period saw the introduction of the two schools that had perhaps the greatest impact on the country: the Amidist Pure Land schools and the more philosophical Zen schools.  The Amidist Pure Land schools, promulgated by evangelists such as Genshin and articulated by monks such as Hōnen, emphasized salvation through faith in Amitabha and remain the largest Buddhist sect today in Japan (and throughout Asia). The more philosophical Zen schools were promulgated by monks such as Eisai and Dogen and emphasized liberation through the insight of meditation. They were adopted equally by the upper classes and had a profound impact on Japanese culture .

Pure Land Buddhism had substantial influence over the art of the Kamakura period.

The Kamakura period favored more realistic and naturalistic art, a style exemplified by the sculpture of the Kei School. Based in Nara , the Kei School was dominant in Buddhist sculpture in Japan beginning around 1200 and into the 14th century, remaining influential until the 19th century. The Kei school was developed and led by the Buddhist sculptor Jōchō, his successor Kakujō, and Kakujō’s son Raijō, the leading sculptors of the preceding generations.

Among sculptors of the Kei school, Unkei is the most famous and considered the most accomplished sculptor of the period. Unkei’s early works are fairly traditional, similar in style to pieces by his father, Kōkei. However, the sculptures he produced for the Tōdai-ji , a Buddhist temple complex in Nara, show a flair for realism different from anything Japan had seen before. 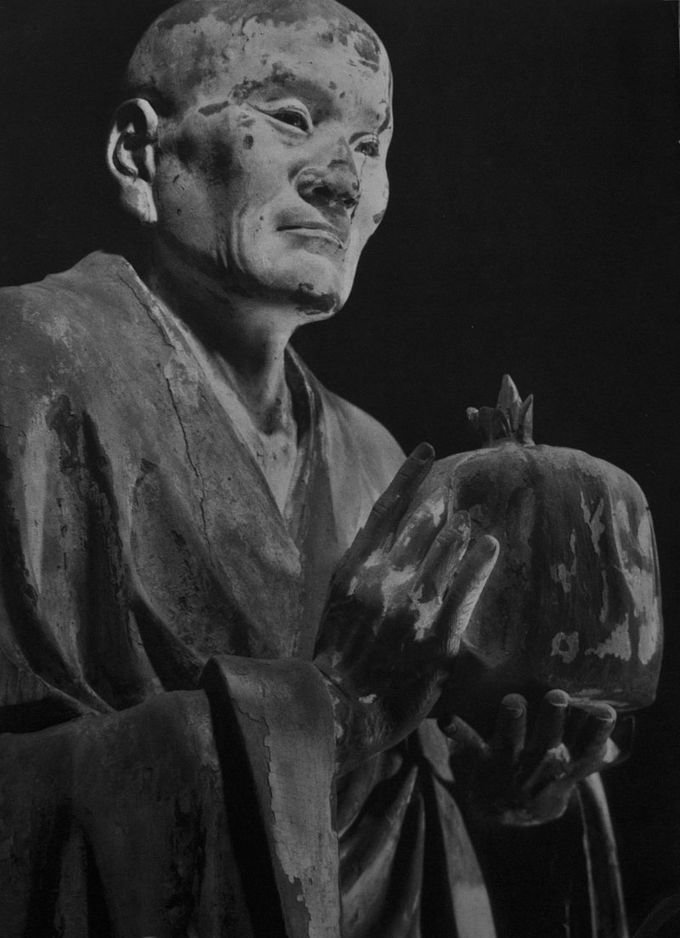 Some of the most popular paintings of the Kamakura period depict an ascending Amida Buddha. The main tenet of Pure Land Buddhism is that chanting the name of Amida could lead to a reincarnation in the “pure land.” Thus, scrolls of Amida were hung in the rooms of people who were dying; it was believed they could be saved by chanting the Amida mantra . 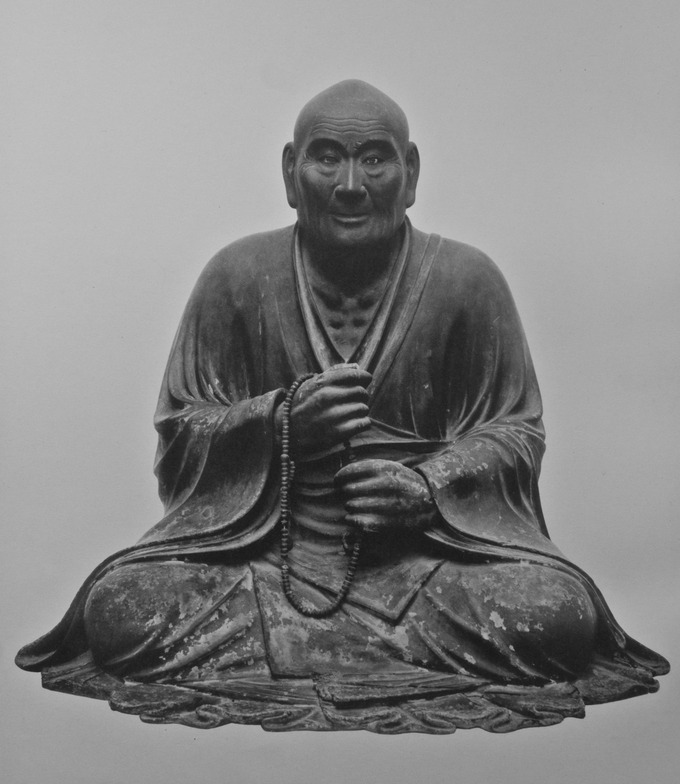 Buddhist Sculpture of Kamakura Period: Unkei in the guise of a monk, with prayer beads; note the powerful hands.

Japanese Painting and Sculpture in the Kamakura Period

The Kamakura Period was marked by a continuation of Heian painting traditions and new innovations in sculpture.

Describe the painting, sculpture, and calligraphy of Zen Buddhism during the Kamakura Period.

Japan suffered a series of civil wars in the late 12th century between several rival families. These wars eventually led to the rise of the feudalistic Kamakura shogunate . In a time of disunity and violence, deepening pessimism increased the appeal of the search for salvation. Kamakura was the age of the great popularization of Buddhism, and the reestablishment of cultural ties with China spawned the growth of Zen Buddhism and Pure Land Buddhism (Jōdo shū Shinran) as the two major branches of Japanese Buddhism. These two new sects dominated the artwork produced during this period.

The Rise of Buddhism

During this time, a number of monks left the Tendai sect and founded separate Buddhist sects of their own. These included:

The older Buddhist sects, such as Shingon, Tendai, and the early schools of the Nara period, continued to thrive through the Kamakura period and even experienced some measure of revival. However, the older schools were partially eclipsed as the newer Kamakura schools increased in popularity and found followers among the new Kamakura government and its samurai.

Zen was not introduced as a separate school until the 12th century, when Myōan Eisai traveled to China and returned to establish a Linji lineage, which eventually perished. Decades later, Nanpo Shōmyō (南) (1235–1308) also studied Linji teachings in China before founding the Japanese Otokan lineage, the most influential and only surviving lineage of Rinzai in Japan. In 1215 Dōgen, a younger contemporary of Eisai’s, journeyed to China himself, where he became a disciple of the Caodong master Tiantong Rujing. After his return, Dōgen established the Sōtō school, the Japanese branch of Caodong. The Sōtō school was further expanded by Keizan. Sōtō priests say that if Dogen is the father of Japanese Sōtō Zen, Keizan Jokin (1268-1325) is its mother. Keizan’s Soji-ji temple was a rival to Dogen’s Eihei-ji. Others say that Dōgen gave Sōtō Zen “high religious ideals” while Keizan ensured Sōtō’s survival.

Painting in the Kamakura Period

Painting from the Kamakura Period largely continued the traditions of the previous Heian Period. As most of the paintings in both the Heian and Kamakura periods were religious in nature, the vast majority were by anonymous artists. Painted mandalas were common, and many were created as hanging scrolls and murals on the walls of temples.  The classic yamato-e style of Japanese painting, which gained significance in the Heian period, was continued throughout this era. Stylistically, painting included landscape elements such as soft rolling hills that seem to reflect something of the actual appearance of the landscape of western Japan, and works continued to be informed by Tang Dynasty Chinese “blue and green style” landscape painting traditions.

Paintings were used to decorate sliding doors (fusuma) and folding screens (byōbu). In addition, the emaki format of painting, consisting of long illustrated hand scrolls, remained popularity. The Kamakura Period witnessed the production of a large number of emaki, usually encompassing religious, historical, or illustrated novels accomplished in the style of the earlier Heian period.

While painting continued to develop throughout the period, sculpture was by far the most popular art form. The Kamakura period is widely regarded as a renaissance era in Japanese sculpture, spearheaded by the sculptors of the Buddhist Kei school. Based in Nara, the Kei school was the dominant school in Japanese Buddhist sculpture into the 14th century. Artist of the Kei school succeeded the technique “yosegi-zukuri” (woodblock construction) and developed a new sculptural style marked by realism, solidity, and representation of movement and emotion. These artists studied early Nara period masterpieces and Chinese Song dynasty sculptures and paintings to influence their work. Sculptors of the time often worked for the Kamakura shogunate and other military clans, producing Buddhist sculptures as well as portrait sculptures.

The Kei school was responsible for the restoration of the temples of Nara and Kyoto, which had been destroyed during warfare in 1180-1185. Among the sculptors of this era, the sculptor Unkei is the most famous and accomplished. His most famous works include a pair of Kongō-rikishi colossal statues in the Tōdai-ji temple of Nara, along with the elaborate portraiture-like statues of Indian priests in Kōfuku-ji. Unkei had six sons who were also sculptors, and their work, like his, is imbued with the new kind of realism and humanism. Tankei, the eldest son and a brilliant sculptor, became the head of his father’s studio. Kōshō, the 4th son, produced a remarkable sculpture of the 10th-century Japanese Buddhist teacher Kuya (903-972). 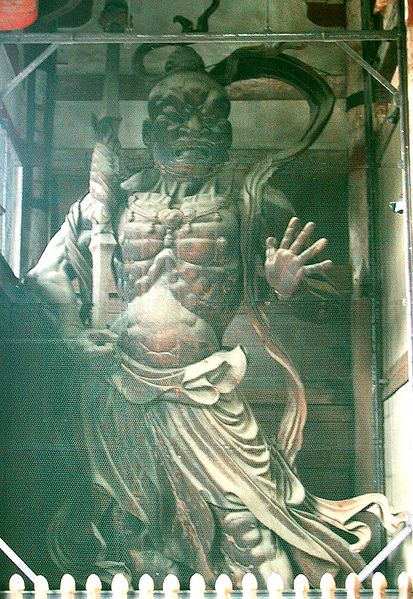 Nio guardian, Todai-ji complex, Nara: Agyō, one of the two Buddhist Niō guardians at the Nandai-mon in front of the Todai ji in Nara. These are some of the finest wooden sculptures in Japan from the 13th century carved by the Kamakura-era sculptor Unkei in 1203.

Kaikei was another famous sculptor of the time, a collaborator of Unkei, and a devout adherent of Pure Land sect of Buddhism. He worked closely with the priest Chōgen (1121–1206) on the reconstruction of the Tōdai-ji temple in Nara. Many of his figures are more idealized than those of Unkei and his sons and are characterized by a beautifully finished surface, richly decorated with pigments and gold. Perhaps his most important work is Amitabha Triad of Ono Jōdo-ji (1195). 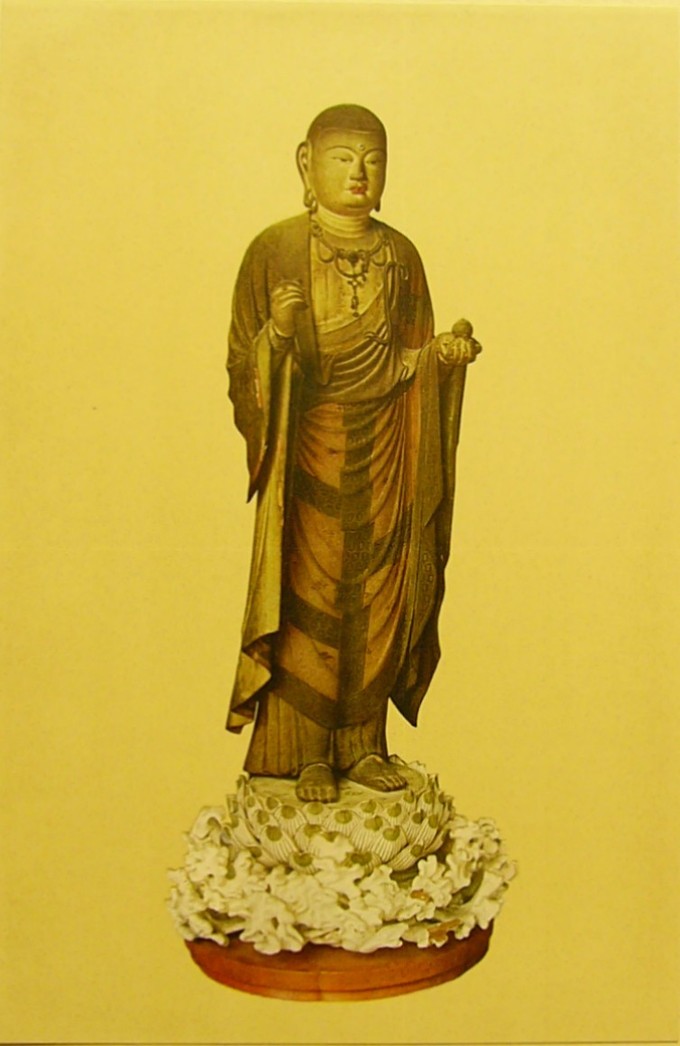 Kaikei Buddha: Many of Kaikei’s figures are more idealized than that of Unkei and are characterized by a beautifully finished surface, richly decorated with pigments and gold.

Japanese Calligraphy in the Kamakura Period

Japanese calligraphy in the Kamakura Period was influenced by the principles of Zen Buddhism.

Discuss the purposes of Japanese calligraphy

Japanese calligraphy is a form of artistic writing in the Japanese language. For many years, the most esteemed calligrapher in Japan was Wang Xizhi, a Chinese calligrapher dating to the 4th century; however, after the invention of Hiragana and Katakana, the Japanese unique syllabaries, a distinctive Japanese writing system developed, and calligraphers produced styles intrinsic to Japan.

Calligraphy in the Kamakura Period

Various cultural and religious influences contributed to the rise of Japanese calligraphy during the Kamakura period.

Zen Calligraphy of the Kamakura Period: Calligraphy by Musō Soseki (1275–1351, Japanese zen master, poet, and calligrapher. The characters “別” (“no spiritual meaning”) are written in a flowing, connected soshō style.

Background: Culture and Politics in the Kamakura Period

The ascension of Minamoto Yoritomo to the title of Shogun following the Hōgen and Heiji rebellions and the victory of the Minamoto clan over the Taira marked the beginning of the Kamakura period (1185–1333 CE). The era is sometimes referred to as “the age of the warriors,” with a broad transition of influence from court to the military establishment. However, it was also a time when exchanges with China of the Song dynasty continued and Buddhism flourished.

Japanese calligraphy of the Kamakura Period both influenced and was influenced by Zen thought. With the rise of the Rinzai school of Zen Buddhism, a less technical style of calligraphy appeared, representative of Zen attitudes. This was exemplified in the works of Musō Soseki, who wrote in a refined sosho style, or Shūhō Myōcho (better known as Daito Kokushi), the founder of Daitoku-ji in Kyoto. In terms of wayō (和様) style of calligraphy, the works of Fujiwara no Shunzei and Fujiwara no Teika are considered outstanding examples of the late Heian and early Kamakura Periods. Zen monks such as Shunjo studied in China, and the copybooks that he brought with him were highly influential for the karayō tradition of calligraphy, expressing a clear kaisho style. Other monks were also influential during this era, including Rankei Doryū, who founded the Kenchō-ji temple in Kamakura where many of his works have been preserved.

In accordance with this school of Buddhist thought, for any particular piece of paper the calligrapher has but one chance to create with the brush. The brush strokes cannot be corrected, and lack of confidence will show up in the work. The calligrapher therefore must concentrate and be fluid in execution. The brush was believed to write a statement about the calligrapher at a certain moment in time.

Through Zen, Japanese calligraphy absorbed a distinctive aesthetic often symbolized by the ensō, or circle of enlightenment. Zen calligraphy is practiced by Buddhist monks and most shodō practitioners. To write Zen calligraphy with mastery, the mind must be cleared and the letters allowed to flow naturally. This state of mind was known as the mushin (無 “no mind state”) by the Japanese philosopher Nishida Kitaro. It is based on the principles of Zen Buddhism, which stress a connection to the spiritual rather than the physical. Before Japanese tea ceremonies (which are connected to Zen Buddhism), one looks at a work of shodō to clear the mind as an essential preparatory step. 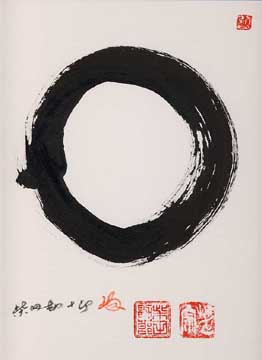 Ensō: Ensō (c. 2000) by Kanjuro Shibata XX. Some artists draw ensō with an opening in the circle, while others close the circle.