Mexican muralism can be defined as the mural painting that was used to promote nationalistic ideals as part of efforts to reunify the country under the post-Mexican Revolution government.

The era from 1930–1945 in Mexico is best marked by Mexican muralism. From the 1920s to 1970s a large number of murals with nationalistic, social, and political messages were created on public buildings, as part of efforts to reunify the country under the post-Mexican Revolution government. Mexican muralism started a tradition that continues to this day in Mexico.

Similar to mural use in the pre-Hispanic and colonial periods, the purpose of these murals were not simply aesthetic, but social, to promote certain ideals. These ideals or principles were to glorify the Mexican Revolution and the identity of Mexico as a mestizo nation, with the indigenous promoted as well as the Spanish.

The movement was strongest from the 1920s to the 1950s, which corresponded to the country’s transformation from a mostly rural and mostly illiterate society to an industrialized one. While today they are part of Mexico’s identity, at the time they were controversial, especially those with socialist messages plastered on centuries-old colonial buildings.

One of the basic underpinnings of the nascence of a post-revolutionary Mexican art was that it should be public, available to the citizenry, and above all not the province of a few wealthy collectors. The great societal upheaval, as well as a lack of relatively wealthy middle class to support the arts, made the concept possible, and on this the painters and the government agreed.

Though commissioned by the government, the artists maintained complete freedom of expression; in addition to the original ideas of a reconstructed Mexico and the elevation of Mexico’s indigenous and rural identity, many of the muralists included elements of Marxism—especially the struggle of the working class against oppression.

The murals, due to their locations and themes, took on a monumental status. Many were painted on the walls of colonial-era government buildings. Techniques included the revival of old techniques such as the fresco—painting on freshly plastered walls—and encaustic or hot wax painting. Others used mosaics and high-fire ceramics, as well as metal parts, and layers of cement.

The three most influential muralists from the 20th century are Diego Rivera, José Clemente Orozco, and David Siqueiros, often referred to as los tres grandes (the three great ones). They believed that art was the highest form of human expression and a key force in social revolution.

Their work defined the movement and created a mythology around the Mexican Revolution and the Mexican people, and promoted Marxist ideals, which are still influential to this day. At the time the works were painted, they also served as a form of catharsis over what the country had endured during the war.

However, the three were quite different in their artistic expression. Rivera’s works were utopian and idealist, Orozco’s were critical and pessimistic, and the most radical were those of Siqueiros, which focused heavily on a scientific future.

The differences among the three have much to do with how each experienced the Mexican Revolution. Rivera was in Europe the entire time and did not fight. He never depicted the horrors of the war but what he perceived to be the social benefits from it. The other two did fight, and both expressed the horrors of war in their work.

Of the three artists, Rivera was the most traditional in terms of painting styles, and he drew heavily from European modernism. His themes were Mexican, often scenes of everyday life and images of ancient Mexico. He originally painted this in bright colors in the European style, but modified it to more earthy tones to imitate indigenous murals. His greatest contribution is the promotion of Mexico’s indigenous past. 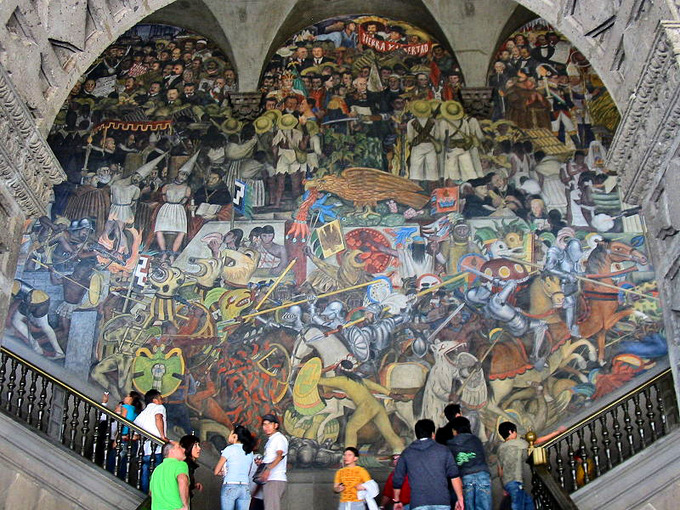 Mural in the main stairwell of the National Palace by Diego Rivera: A leader in Mexican muralism, much of Rivera’s work was utopian and idealist.

Orozco also began with a European style of expression. However, his art developed into an angry denunciation of oppression especially by those he considered to be an evil and brutal ruling class. His work was somber and dire, with an emphasis on human suffering and a fear of the technology of the future.

Unlike other artists, Orozco never glorified the Mexican Revolution, having fought in it, but rather depicted the horrors of this war. This caused many of his murals to be heavily criticized and even defaced. 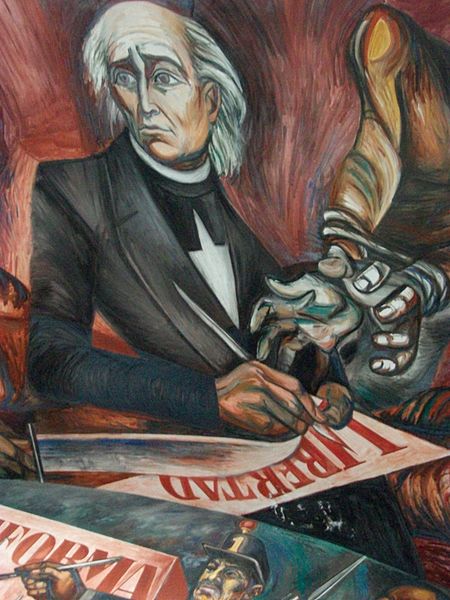 La gran legislación revolucionaria mexicana y la abolición de la esclavitud: Orozco, one of the three great muralists of the 20th century, painted murals that were more critical and pessimistic that his peers.

Siqueiros was the youngest and most radical of the three, having joined the Venustiano Carranza army when he was 18 and who experienced the Revolution from the front lines. Although all three were communists, Siqueiros was the most dedicated, with his painting filled with portrayals of the proletarian masses.

His work is also characterized with rapid, sweeping, bold lines and the use of modern enamels, machinery, and other elements related to technology. His radical politics made him unwelcome in Mexico and the United States, so he did much of his work in South America. His masterpiece is considered to be the Polyforum Cultural Siqueiros, located in Mexico City. 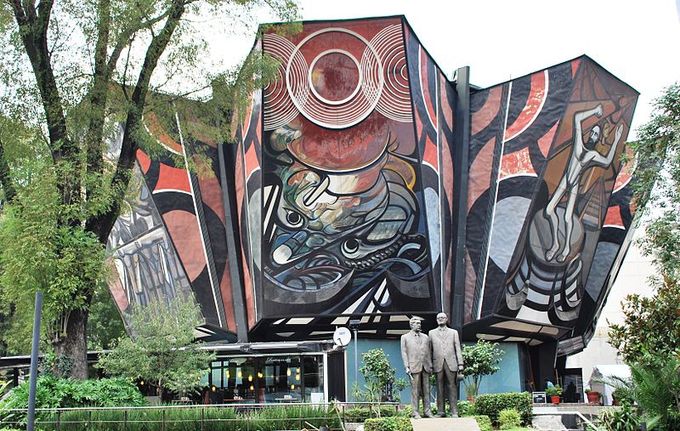 Mexican muralism brought mural painting back to the forefront of Western art in the 20th century, and its influence spread abroad, especially to promote the idea of mural painting as a form to further social and political ideas. The concept of a mural as a political message was transplanted to the United States, especially in the former Mexican territory of the Southwest, and served as inspiration to the later Chicano Mural Movement.

Frida Kahlo, a Mexican painter known especially for her self-portraits, has been celebrated internationally as emblematic of Mexican national and indigenous traditions, and by feminists for her uncompromising depiction of the female experience and form.

Discuss the work of Frida Kahlo

Frida Kahlo de Rivera (July 6, 1907–July 13, 1954), born Magdalena Carmen Frieda Kahlo y Calderón, was a Mexican painter known especially for her self-portraits. Her work has been celebrated internationally as emblematic of Mexican national and indigenous traditions, and by feminists for its uncompromising depiction of the female experience and form.

Kahlo’s life began and ended in Mexico City, in the home she was born in, known as La Casa Azul (the Blue House). Marked by physical affliction due to a serious bus accident when she was 18, Kahlo spent a great deal of time recovering from her injuries in an isolated space, and it is here that she completed many of her works. Kahlo said “I paint myself because I am so often alone and because I am the subject I know best.” 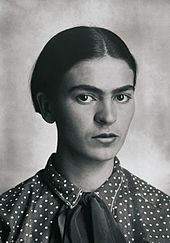 Frida Kahlo: Kahlo photographed by her father in 1926.

Frida Kahlo’s work has variously been described as surrealist art, folk art, and naive art, none of which were satisfactory to the artist herself. In 1938 André Breton, the principal initiator of the surrealist movement, described Kahlo’s art as a “ribbon around a bomb.” Frida rejected the surrealist label imposed by Breton, and argued that her work reflected more of her reality than her dreams.

Frida Kahlo is known to have created at least 140 paintings, along with dozens of drawings and studies. Of her paintings, 55 are self-portraits that often incorporate symbolic portrayals of physical and psychological wounds.

Kahlo’s accident made it impossible for her to have her own children, resulting in several miscarriages throughout her life. Because of her experiences with infertility, many of her paintings reference reproductive failure. She painted Henry Ford Hospital right after her miscarriage in 1932. In this work, Frida depicts herself on a bed bleeding, with the cold and industrial feeling from being far from home in Detroit, shown behind her. She chose to paint on a sheet of metal. 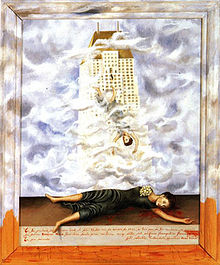 The Suicide of Dorothy Hale: The legend translated: “In the city of New York on the twenty-first day of the month in October, 1938, at six o’clock in the morning, Mrs. Dorothy Hale committed suicide by throwing herself out of a very high window of the Hampshire House building. In her memory Mrs. Clare Boothe Luce commissioned this retablo, executed by Frida Kahlo.”

Frida Kahlo was influenced by indigenous Mexican culture, which is apparent in her use of bright colors, dramatic symbolism and primitive style. She frequently included the monkey as a symbol in her work, which in Mexican mythology is a symbol of lust.

She often combined elements of the classic religious Mexican tradition with iconography that appears to be from a surrealist tendency. Frida Kahlo had a notoriously volatile marriage with the famous Mexican artist Diego Rivera. The couple likely influenced each other’s work through the years.

In 1938, Kahlo had her only solo gallery showing in the United States at the Julien Levy Gallery. The works were well received and several prominent artists attended the event.

At the invitation of André Breton, she went to France during 1939 and was featured at an exhibition of her paintings in Paris. The Louvre bought one of her paintings on display, The Frame. It was the first work of a twentieth-century Mexican artist that the Louvre purchased. Kahlo made the acquaintance of Wolfgang Paalen and Alice Rahon, whom she invited to come to Mexico.

Aside from the 1939 acquisition by the Louvre and a 1946 $1,000 award from the Mexican Government for her painting, Kahlo’s work was not widely acclaimed until decades after her death. Often she was remembered only as Diego Rivera’s wife. It was not until the end of the 1970s and the early 1980s, with the beginning of Neomexicanismo, that she became well known to the public.