Art of the Middle Kingdom

The art of China, once known as the Middle Kingdom, arguably has the oldest continuous tradition in the world.

Discuss the painting, sculpture, pottery, and decorative arts of the Middle Kingdom

In China, the group of states in the central plain was commonly called Zhōngguó (中) and Zhōnghuá (中). In the 19th century the term meaning ” Middle Kingdom ” emerged as the formal name of the country. The Chinese were not unique in regarding their country as “central”, as many civilizations have had this view.

Chinese art has arguably the oldest continuous tradition in the world, marked by an unusual degree of continuity within and consciousness of that tradition. This is a departure from the Western collapse and gradual recovery of classical styles . The decorative arts are extremely important in China, and much of the finest work was produced in large workshops or factories by essentially unknown artists. Much of the best work in ceramics, textiles, and other techniques was produced over a long period by the various Imperial factories or workshops, which was used by the court as well as distributed internally and abroad on a massive scale to demonstrate the wealth and power of the Emperors. In contrast , ink wash painting developed aesthetic values depending on the imagination of the artist, similar to and predating the art traditions of the West.

Traditional Chinses painting involves similar techniques to calligraphy, using a brush dipped in black or colored ink painted on paper or silk. The finished work can be mounted on hanging scrolls or handscrolls. Traditional painting was also done on album sheets, walls, lacquerware , folding screens, and other media .

The two main techniques in Chinese painting are Gong-bi (meaning “meticulous” and using highly detailed brushstrokes that delimit details very precisely) and ink and wash painting (watercolor or brush painting). Artists from the Han (202 BCE) to the Tang (618–906 CE) dynasties primarily painted the human figure. Much known of early Chinese figure painting comes from burial sites, where paintings were preserved on silk banners, lacquered objects, and tomb walls. Early tomb paintings were meant to protect the dead or help their souls get to paradise; others illustrated the teachings of Confucius or depicted scenes of daily life.

The Five Dynasties period to the Northern Song period (907–1128 CE) is known as the “great age of Chinese landscape”. In the north, artists such as Jing Hao, Li Cheng , Fan Kuan, and Guo Xi painted pictures of towering mountains using strong black lines , ink wash, and sharp, dotted brushstrokes to suggest rough stone. In the south, Dong Yuan, Juran, and other artists painted the rolling hills and rivers of their native countryside in peaceful scenes with softer, rubbed brushwork. These became the classical styles of Chinese landscape painting. 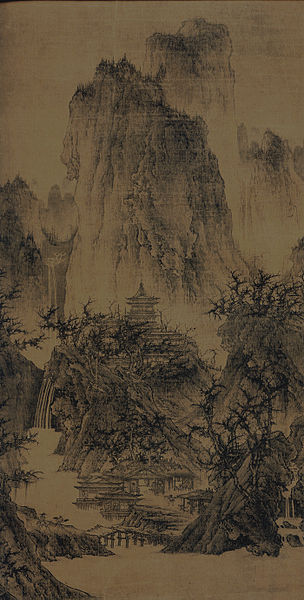 Chinese ritual bronzes from the Shang and Western Zhou Dynasties still exert an influence over Chinese art. Many are cast with complex patterned and zoomorphic decoration. The spectacular Terracotta Army was assembled for the tomb of Qin Shi Huang, the first emperor of a unified China from 221–210 BCE, to enable the deceased to enjoy the same lifestyle in the afterlife. Smaller figures in pottery or wood were placed in tombs for centuries afterwards, peaking in quality in the Tang Dynasty. 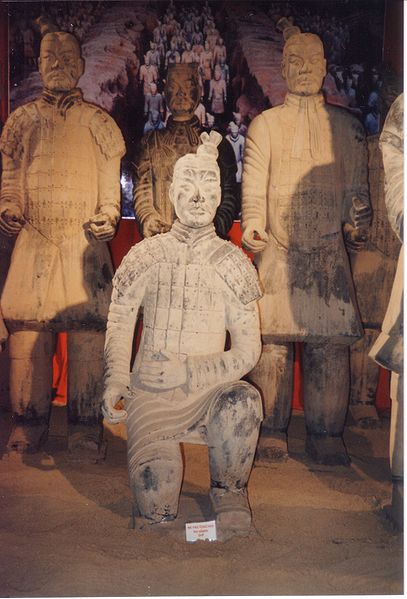 Crossbow men from the Terracotta Army, interred by 210 BCE, Qin Dynasty: The spectacular Terracotta Army was assembled for the tomb of Qin Shi Huang, the first emperor of a unified China from 221–210 BCE.