Painted pottery emerged during the Neolithic period of the Yangshao and Longshan cultures.

The invention of pottery and ceramics marked the advent of the New Stone Age in China around 6,000 years ago. The earliest earthenware was molded with clay by hand and fired at a temperature of about 500-600 degrees Celsius. Painted pottery emerged during the Yangshao and Longshan cultures.

The Yangshao was a Neolithic culture that existed extensively along the central Yellow River in China from around 5000 BCE to 3000 BCE. These people flourished mainly in the provinces of Henan, Shaanxi, and Shanxi. 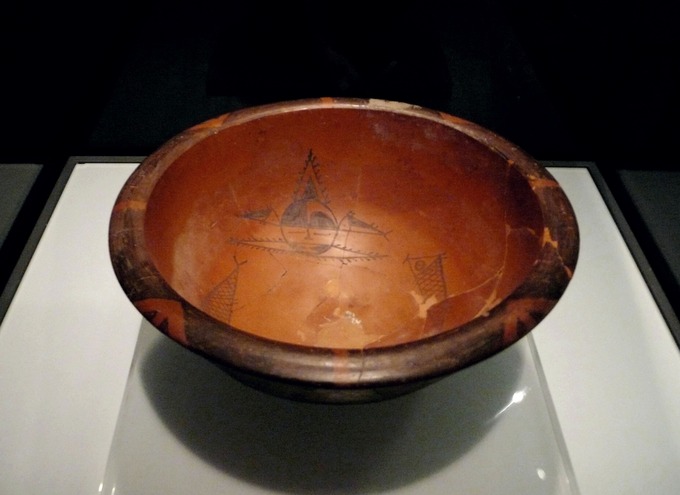 The Longshan were a late Neolithic culture in China, centered in the central and lower Yellow River. They existed just after the Yangshao culture, from about 3000 BCE to 2000 BCE.

The Longshan culture was distinguished by its advanced pottery skills, including the use of pottery wheels. This culture’s most noted creation is highly polished, black pottery, also known as eggshell pottery because of its thin walls. Eggshell pottery has also been discovered in the Yangzi River valley and as far as the southeastern coast of modern China, a clear indication that Neolithic agricultural subgroups of the greater Longshan culture spread across the ancient boundaries of China. 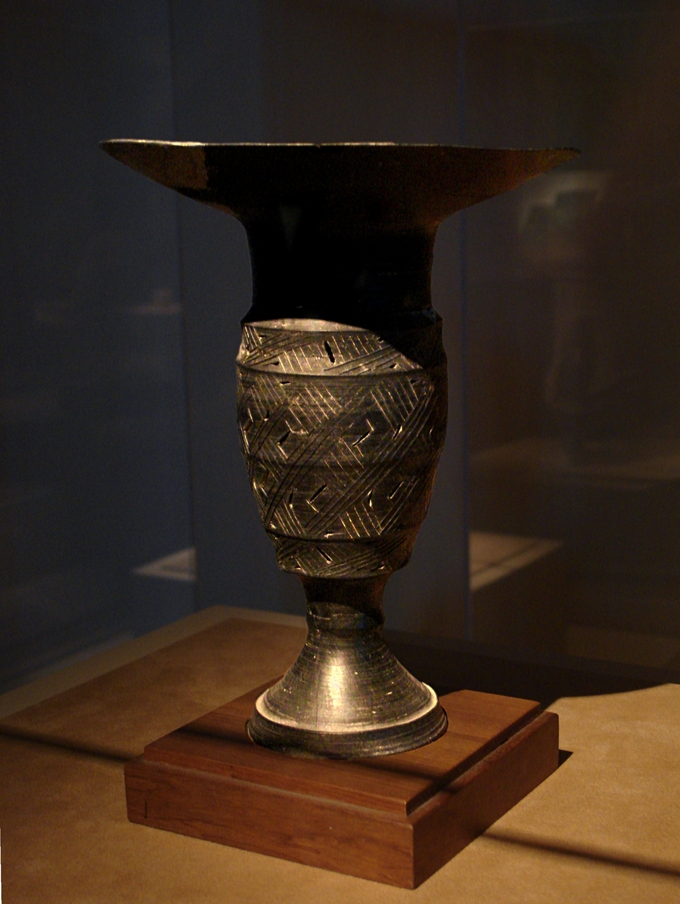 The Neolithic population in China reached its peak during the Longshan culture. Toward the end of the era, the population decreased sharply; this was matched by the disappearance of high-quality black pottery in ritual burials.

Jade has been used in virtually all periods of Chinese history. The earliest jades of the Neolithic Period were often quite simple and without ornamentation.

Describe the jade work and religious architecture of the Liangzhu culture

Jade has been used in virtually all periods of Chinese history and generally accords with the characteristic decorative style of each period. The earliest jades of the Neolithic Period are often quite simple and unornamented, used as ritual or decorative versions of the tools and weapons in ordinary use. These are presumed to have been symbols of political power or possibly religious authority.

During Neolithic times, the known sources of nephrite jade in China for utilitarian and ceremonial items were the now-depleted deposits in the Ningshao area in the Yangtze River Delta (during the Liangzhu culture, 3400–2250 BCE) and in an area of the Liaoning province in Inner Mongolia (during the Hongshan culture, 4700–2200 BCE). As early as 6000 BCE, Dushan Jade, a jade substitute found near Mount Du, has also been mined. In the Yin Ruins of the Shang Dynasty in Anyang, Dushan Jade ornaments were unearthed in the tombs of the Shang kings.

Jade was used to create utilitarian and ceremonial objects ranging from indoor decorative items to jade burial suits, reflecting the ancient Chinese belief that jades would confer immortality or prolong life and prevent decay. The bi and cong are objects only found in jade in early periods, thought to have had religious or cosmic significance. The bi is a circular disk with a hole, originally plain but increasingly decorated over time, and the cong is a vessel that’s square on the outside but circular on the inside. In later literature, the cong represents the earth and the bi represents the sky. 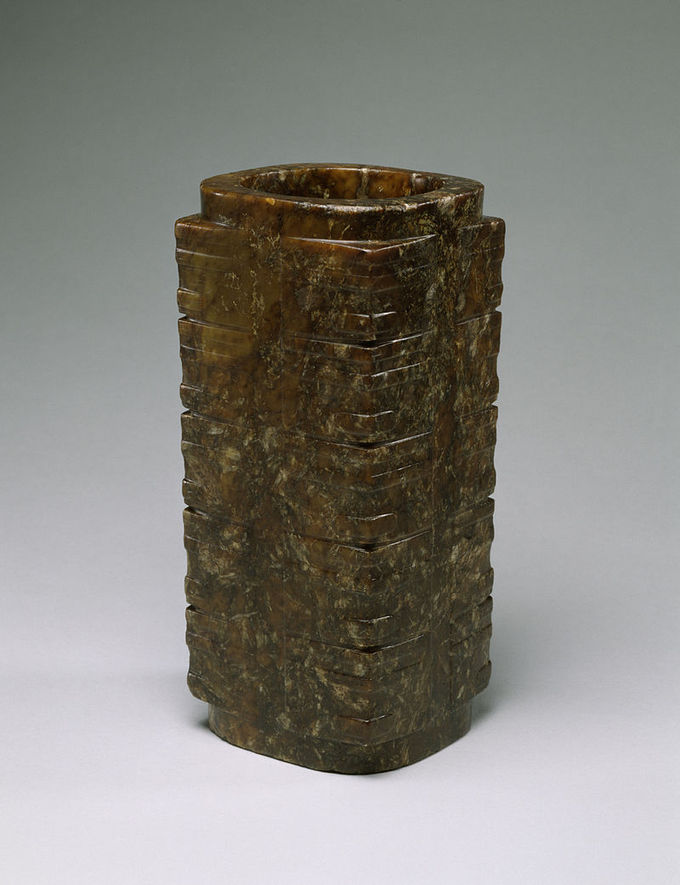 Neolithic cong, 3rd millennium BCE: The cong is a Chinese jade vessel, square on the outside but circular on the inside.

Jade in the Liangzhu Culture

The Liangzhu culture (3400-2250 BCE) was the last Neolithic jade culture in the Yangtze River Delta of China. Its influence extended from around Lake Tai north to Nanjing and the Chang Jiang, east to Shanghai and the sea, and south to Hangzhou. The culture was highly stratified , as jade, silk, ivory , and lacquer artifacts were found exclusively in elite burials, while simple pottery was more commonly found in the plots of common individuals. The site at Liangzhu was discovered in Yuhang County, Zhejiang, and initially excavated by Shi Xingeng in 1936.

The jade from this culture is characterized by large, finely worked ritual jades, commonly incised with the taotie motif. The most exemplary artifacts from the culture were its cong (cylinders, the largest of which weighs 3.5 kg), bi (discs) and Yue axes (ceremonial axes). Jade pendants found were engraved with representations of small birds, turtles, and fish. Many Liangzhu jade artifacts had a white, milky, bone-like aspect due to their tremolite rock origin and the influence of water-based fluids at burial sites, although jade made from actinolite and serpentine were also common. 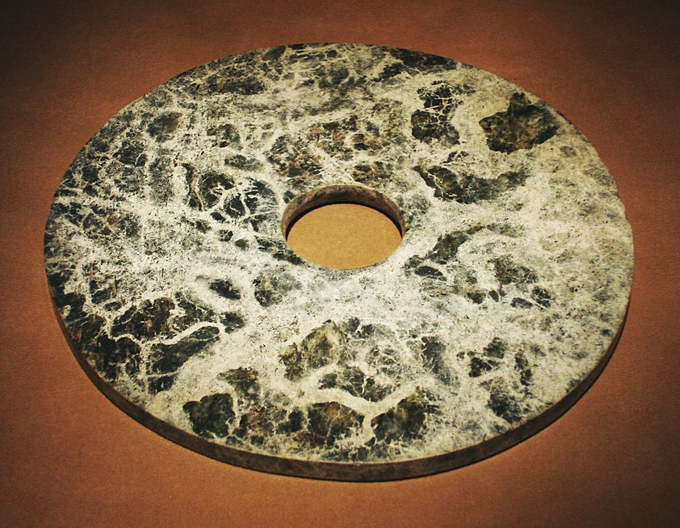 Liangzhu Jade Bi: Jade bi from the Liangzhu culture; the ritual object is a symbol of wealth and military power.