Vase Painting in the Orientalizing Period

During the Orientalizing period, Greek art evolved to feature a blend of Near Eastern and Egyptian stylistic conventions.

The Orientalizing Period followed the Geometric period and lasted for about a century, from 700 to 600 BCE. This period was distinguished by international influences—from the Ancient Near East, Egypt, and Asia Minor—each of which contributed a distinctive Eastern style to Greek art.

The close contact between cultures developed from increasing trade and even colonization. Motifs , creatures, and styles were borrowed from other cultures by the Greeks, who transformed them into a unique Greek–Eastern mix of style and motifs.

During the Orientalizing period in Corinth human figures were rarely seen on vases. Animals such as lions, griffins, sphinxes , and sirens were depicted instead.

Palmettes and lotus blossoms were used instead of geometric patterns to fill empty space , although on some vessels negative space became more prominent. This oriental black figure style originated in the city of Corinth, spread to Athens, and was exported throughout Greece. 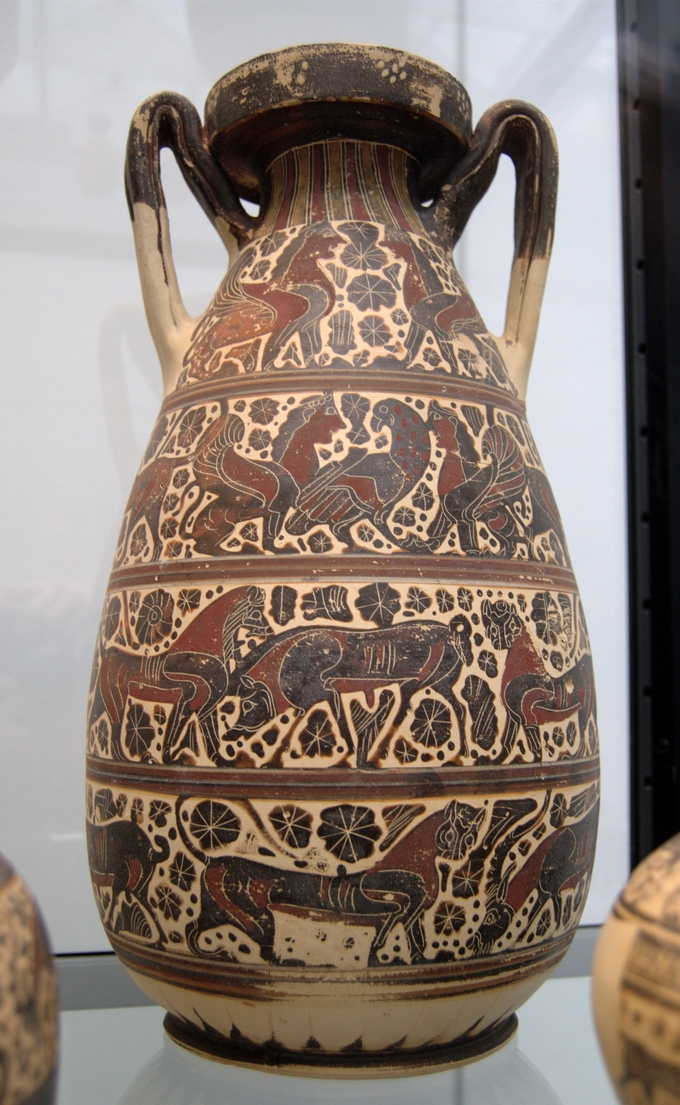 The Corinthians developed the technique of black figure painting during this period. Black figure pottery was carefully constructed and fired three different times to produce the unique red and black colors on each vase.

The black color came from a slip painted onto the vessel, after which incised lines were drawn on to outline and detail the figures. Additionally, red and white pigments could be added for more color or to differentiate details.

The unpainted portions of the vase would remain the original red-orange color of the pot. The full effect of this style of painting would not have been seen until after the vase emerged from its firings in the kiln . As the style spread, the subject matter changed from strictly Near Eastern animals to scenes from Greek mythology and everyday life.

Pottery produced during the Orientalizing period across the Isthmus of Corinth in Athens is known as Proto-Attic. In this region, floral and animal motifs are common, but the human figure appears in the work of the most prominent painters such as the Analatos Painter, the Mesogeia Painter, and the Polyphemos Painter.

The Proto-Attic style marked the first depictions of discernibly Greek religious and mythological themes in vase painting. The bodies of men and animals were depicted in silhouette, though their heads were drawn in outline. Women were drawn completely in outline. Proto-Attic vases are usually distinguished by their orange clay, which is available in the Athens area. 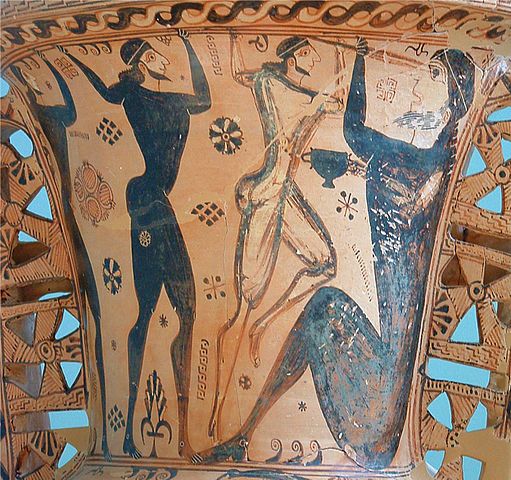 The Polyphemos Painter, The Blinding of Polyphemos, c. 600 BCE: This detail from a Proto-Attic amphora shows the outline and silhouette-based forms in which the human body was depicted at the time, as well as the orange clay available to Attic ceramicists.

Sculpture in the Greek Orientalizing Period

The Orientalizing Period lasted for about a century, from 700 to 600 BCE. This period was distinguished by international influences, from the Ancient Near East, Egypt, and Asia Minor, each of which contributed a distinctive Eastern style to Greek art. The close contact between cultures developed from increasing trade and even colonization.

Styles were borrowed from other cultures by the Greeks who transformed them into a unique Greek-Eastern mix of style and motifs . Male and female sculptures produced during this time share interesting similarities, but also bear differences that inform the viewer about society’s expectations of men and women.

The Lady of Auxerre

A small limestone statue of a kore (maiden), known as the Lady of Auxerre (650–625 BCE), from Crete demonstrates the style of early Greek figural sculptures. This style is known as Daedalic sculpture, named for the mythical creator of King Minos’s labyrinth , Daedalus. The style combines Ancient Near Eastern and Egyptian motifs.

The Lady of Auxerre, circa 650–625 BCE: This small limestone statue is possibly from Crete.

The Lady of Auxerre is stocky and plank-like. Her waist is narrow and cinched, like the waists seen in Minoan art. She is disproportionate, with long rigid legs and a short torso. A dress encompasses nearly her entire body—it tethers her legs together and restricts her potential for movement. The rigidity of the body recalls pharaonic portraiture from Ancient Egypt .

Her head is distinguished with large facial features, a low brow, and stylized hair. The hair appears to be braided, and falls down in rigid rows divided by horizontal bands. This style recalls a Near Eastern use of patterns to depict texture and decoration.

Her face and hair are reminiscent of the Geometric period. The face forms an inverted triangle wedged between the triangles formed be the hair that frames her face. Traces of paint tell us that this statue would have originally be painted with black hair and a dress of red and blue with a yellow belt.

There are no inscriptions on sculpture before the appearance of the bronze Mantiklos Apollo (early seventh century BCE) found in Thebes. The figure, named for the individual who left it as an offering , is that of a standing man with a rigid and somewhat Daedalic form.

His legs bear the inscription, “Mantiklos offered me as a tithe to Apollo of the silver bow; do you, Phoibos [Apollo], give some pleasing favor in return.” The inscription is a declaration of the statuette to Apollo, followed by a request for favors in return.

Apart from the novelty of recording its own purpose, this sculpture adapts the formulae of later Orientalized sculptures, as seen in the shorter more triangular face and slightly advancing left leg. This is sometimes seen as anticipating the greater expressive freedom of the later seventh century BCE. As such, the Mantiklos figure is referred to in some quarters as proto-Daedalic. 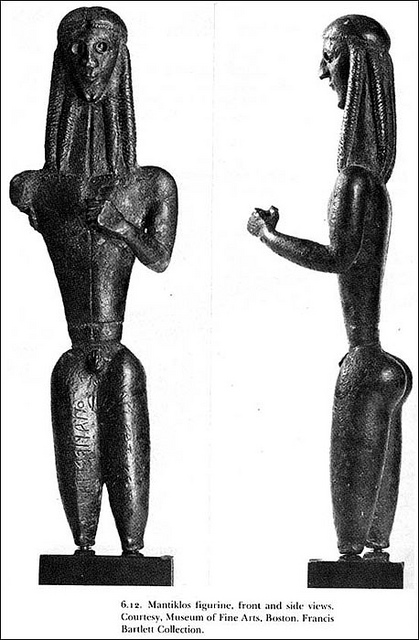 Mantiklos Apollo: Bronze Early 7th century BCE. Thebes. The side view shows the separation of the figure’s arm from his chest and his slightly advancing left leg.

Similarities of the Statues

Despite the separation of several decades and over 200 miles, the Mantiklos Apollo and the Lady of Auxerre share interesting similarities, including their long plaited hair, cinched waist, stylized smile, and hand raised to the chest—all of which recall ancient Egyptian sculpture. Although the right arm of the Mantiklos Apollo is missing, the position of its shoulder implies a possible position similar to that of the left arm of the Lady of Auxerre, straight at its side.

However, we can already see striking differences that will remain the standard in Greek art for centuries. The male body, as a public entity entitled to citizenship, is depicted nude and free to move. This freedom of movement is seen not only in the legs of the Apollo figure but also in the separation of his hand from his chest.

On the other hand, the female body, as a private entity without individual rights, is clothed and denied movement. While the Mantiklos Apollo holds his hand parallel to his chest, the Lady of Auxerre places her hand directly on hers, maintaining the closed form expected of a respectable woman.

The temples of the Greek Orientalizing period had simple plans and sculpture that were influenced by styles from Egypt and the Near East.

Identify some of the outside influences on Greek temples

The basic principles for the development of Greek temple architecture have their roots between the tenth and seventh centuries BCE. In its simplest form as a naos or cella , the temple was a simple rectangular shrine with protruding side walls (antae) that formed a small porch. By adding columns to this small basic structure, the Greeks triggered the development and variety of their temple architecture. 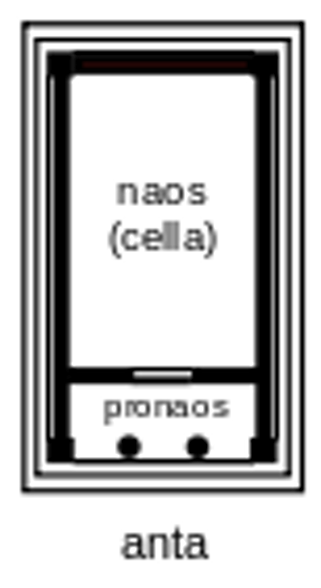 Anta schematic: Early anta-planned temples consisted of a portico (pronaos) and an inner chamber (naos/cella) atop a simple platform. Two columns marked the entrance to the inner chamber.

The building of stone temples first began during the Orientalizing period. Earlier temples were made from wood and other perishable materials and used terra cotta revetments in the form of rectangular and circular panels. With the introduction of stone as a building material, revetments became unnecessary and were replaced by sculptural ornamentation.

These temples derive their structure from Minoan and Mycenaean architectural designs. Minoan shrines, as seen at Knossos, were tripartite shrines fronted by three columns, while the plan of the Mycenaean king’s chamber (or megaron) was appropriated for use by the gods.

Oriental Greek stone temples were fronted by three columns and one entrance which lead into a single room chamber (cella), where the cult statue would be placed. The temple cella was reserved for the cult statue, while cult rituals (often sacrifices) took place outside in front of the temple and usually around an altar.

Temple A at Prinias

Temple A at Prinias (c. 650–600 BCE) on the island of Crete is the oldest known Greek temple decorated with sculpture. Its plan was similar to the anta design with a third column in the center in front of the doorway. One step spanning the width of the facade led to the pronaos . The columns were very simple, rectangular (as opposed to cylindrical) blocks with very thin bases and capitals . Unlike Minoan columns, the shafts of the columns of Temple A did not taper; rather, their width remained constant for the entire length.

On the entablature , the frieze of the facade consisted of a series of reliefs depicting a procession of riders on horseback with little variation. The scale of the horses dwarfs that of their riders. Each horse stands in profile, while each rider faces the viewer with his sword raised and his shield seemingly connecting his head to his legs.

Although their shields cover most of their bodies, the seemingly bare state of their legs implies that the riders might be nude, as was typical for the male body in art. Each rider has a stylized nose, eyes, and eyebrows and wears a helmet. Like free-standing sculptures of the time, the hairstyle of the riders is plaited in a somewhat Egyptian style .

A meander runs atop the reliefs. The current cracked condition of the frieze is a likely indicator that it was assembled in a piecemeal fashion, as opposed to being carved as a singular entablature. Atop the entablature sat sculptures of two winged female creatures resembling the sphinx or the lamassu of the ancient Assyrian and Babylonian cultures .

Temple A portico frieze: Made of marble and originally from Prinias, Crete, c. 650–600 BCE.

Behind the facade of Temple A sat a doorway with an intricately designed lintel . Its frieze consisted of six stylized panthers standing in high relief . This motif is typical of northern Syria.

Unlike the horses on the façade frieze, each group of three panthers face each other with their heads turned toward the viewer. Between each group sits a plain rectangular recess, probably to mark the location of the central column that supported the lintel.

Atop the frieze sit two stylized female sculptures in the round who face each other. One figure places her hands flatly on her lap, while the other holds her hands in a position to accommodate a cup or similar object. It is believed that these figures represent goddesses, although the identities of those goddesses remain disputed.

Each sits in profile on a plain backless bench. The face of each figure has almond-shaped eyes and stylized eyebrows similar to those on Egyptian sculptures. Their hair is plaited and falls to either side of their shoulders.

Like the free-standing sculptures of the Orientalizing period, each figure on the lintel of Temple A wears Egyptian-style headgear with geometric patterns and cloaks atop their geometrically patterned dresses, which are cinched at the waist. While their feet protrude from beneath their long skirts, the blocks that define the lower parts of their bodies provide no acknowledgement of the body beneath the clothing. 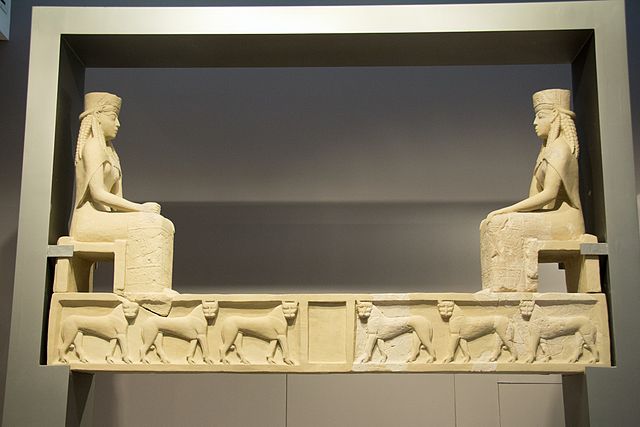 Lintel from Temple A: Made of marble and originally from Prinias, Crete, c. 650–600 BCE.