Architecture during the Tang Dynasty

Since the Tang Dynasty, Chinese architecture has had a major influence on the architectural styles of Korea, Vietnam, and Japan.

Describe the influence of architecture from the Tang dynasty on Korea, Vietnam, and Japan

The Sui Dynasty (589–618 CE) was a short-lived Imperial Chinese dynasty. Preceded by the Southern and Northern Dynasties, it unified China for the first time after over a century of north-south division. The Sui Dynasty was followed by the Tang Dynasty, which ruled from June 18, 618 until June 1, 907 CE, when the Five Dynasties and Ten Kingdoms Period began.

The Tang Dynasty was founded by the Li family, who seized power during the decline and collapse of the Sui Empire. The first half of the Tang Dynasty’s rule was largely a period of progress and stability until the An Lushan Rebellion and subsequent decline of central authority in the later half of the dynasty. The dynasty was interrupted briefly by the Second Zhou Dynasty (October 8, 690 – March 3, 705), when Empress Wu Zetian seized the throne, becoming the only Chinese empress to reign in her own right. Chinese culture flourished and further matured during the Tang era, considered the greatest age for Chinese poetry. Architecture also greatly advanced during this time.

Architecture of the Tang Dynasty

Beginning in the Tang Dynasty, Chinese architecture has had a major influence on the architectural styles of Korea, Vietnam, and Japan. From the Tang Dynasty onward, brick and stone architecture gradually became more common and replaced wooden edifices. The earliest examples of this transition can be seen in building projects such as the Zhaozhou Bridge (completed in 605) or the Xumi Pagoda (built in 636). However, stone and brick architecture was used in the subterranean tomb architecture of earlier dynasties. 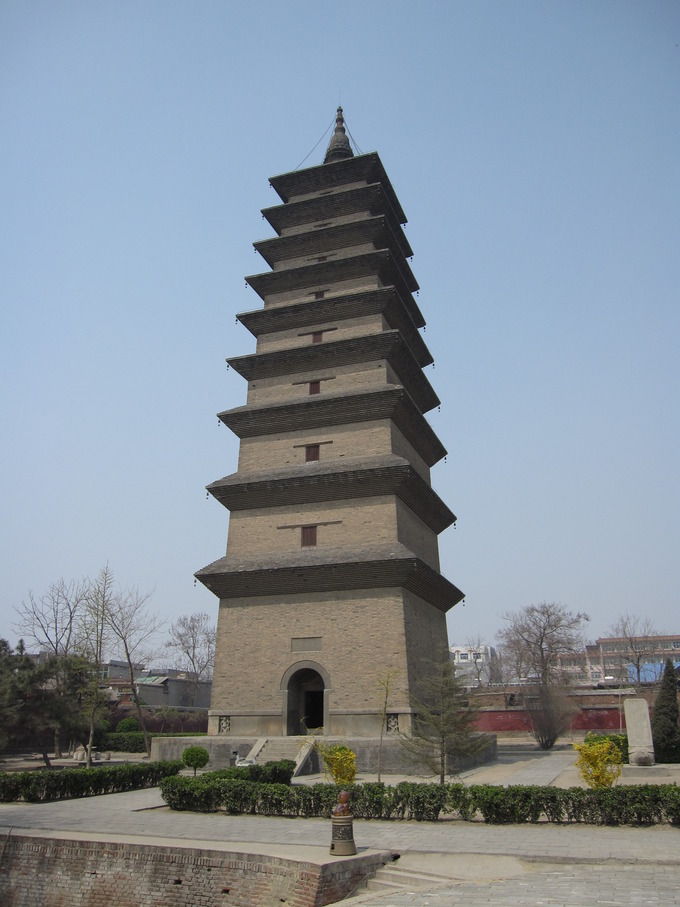 The Xumi Pagoda: This square-base stone and brick pagoda was built in the year 636 CE during the reign of Emperor Taizong of the Tang Dynasty (618-907). It stands at a height of 48 m (157 ft) and has been well preserved since its initial construction. The monastery that once surrounded the pagoda, however, has largely been destroyed, with the exception of a few structures.

In the realm of structural engineering and technical Chinese architecture, government standard building codes were outlined in the early Tang book of the Yingshan Ling (National Building Law). Fragments of this book have survived in the Tang Lü (The Tang Code), while the Song dynasty architectural manual of the Yingzao Fashi (State Building Standards) by Li Jie in 1103 is the oldest existing technical treatise on Chinese architecture that has survived in full. During the reign of Emperor Xuanzong of Tang (712–756), 34,850 registered craftsmen served the state, managed by the Agency of Palace Buildings (Jingzuo Jian).

The tombs and mausoleums of imperial family members, such as the 8th century Tang Dynasty tombs at the Qianling Mausoleum , are counted as part of the imperial tradition in architecture. These above-ground earthen mounds and pyramids had subterranean shaft-and-vault structures lined with brick walls since at least the Warring States (481–221 BCE) period.

Buddhist temples were also commonplace in the Tang Dynasty, such as the Nanchan Temple near the town of Doucun on Wutaishan, in Shanxi Province. The temple was built in 782 CE, and its Great Buddha Hall is currently China’s oldest preserved timber building extant, as wooden buildings are prone to fire and destruction. Not only is Nanchan Temple an important architectural site, it also contains an original set of artistically important Tang sculptures dating from the period of its construction. Seventeen sculptures share the hall’s interior space with a small stone pagoda. 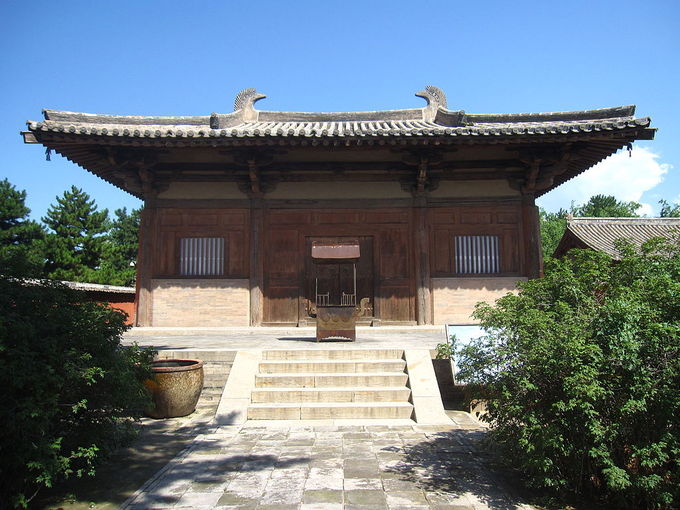 As the oldest extant timber-frame building in China, The Great Buddha Hall is key to understanding Chinese architectural history. The humble building is a three- bay square hall 10 meters deep and 11.75 meters across the front. The roof is supported by twelve pillars implanted directly into a brick foundation, and the hip-gable roof is supported by brackets. The hall does not contain interior columns or a ceiling, nor are there struts supporting the roof in between the columns, which indicates that this is a low-status structure. The hall contains several features of Tang Dynasty halls, including its longer central front bay and the use of camel-hump braces.

Chang’an was the capital city of the Tang Dynasty as in the earlier Han and Jin dynasties. The roughly square city was built with six miles of outer walls running east to west and more than five miles of outer walls running north to south. The royal palace, the Taiji Palace, stood north of the city’s central axis. From the large Mingde Gates located mid-center of the main southern wall, a wide city avenue stretched all the way north to the central administrative city, behind which was the Chentian Gate of the royal palace, or Imperial City. Intersecting this were numerous streets running east to west and north to south. These main intersecting roads formed 108 rectangular wards with walls and four gates each, each filled with multiple city blocks. The city was made famous for this checkerboard pattern of main roads with walled and gated districts.

Of these 108 wards in Chang’an, two (each the size of two regular city wards) were designated as government-supervised markets, and other spaces were reserved for temples, gardens, and ponds. Throughout the entire city, there were 111 Buddhist monasteries, 41 Daoist abbeys , 38 family shrines, two official temples, seven churches of foreign religions, 10 city wards with provincial transmission offices, 12 major inns, and six graveyards. Some city wards were filled with open public playing fields or the backyards of lavish mansions for playing horse polo and cuju football. In 662, Emperor Gaozong moved the imperial court to the Daming Palace, which became the political center of the empire and served as the royal residence of the Tang emperors for more than 220 years.

Painting during the Tang Dynasty

The Tang Dynasty is considered a golden age in Chinese civilization, and Chinese figure painting developed dramatically during this time.

Describe the advancements of the “painting of people” style, the shuimohua style, the shan-shui style, and painting on architectural structures that occurred during the Tang Dynasty

During the Tang Dynasty , considered a golden age in Chinese civilization , Chinese painting developed dramatically both in subject matter and technique. The advances that characterized Tang Dynasty painting had a lasting influence in the art of other countries, especially in East Asia (including Korea, Japan, and Vietnam) and central Asia.

During the early Tang period, the painting style was mainly inherited from the previous Sui Dynasty. The “painting of people” developed greatly during the Tang Dynasty, primarily due to paintings of the Buddha, monks, and nobles known as court paintings. Figure painting reached the height of elegant realism in the art of the court of Southern Tang (937-975). The theory of painting also developed during this time as Buddhism , Taoism , and traditional literature influenced the art form. Paintings on architectural structures, such as murals, ceiling paintings, cave paintings, and tomb paintings, were very popular, exemplified in the paintings of the Mogao Caves in Xinjiang.

Brothers Yan Liben and Yan Lide were among the most prolific painters of this period. Yan Liben was the personal portraitist to the Emperor Taizong, and his most notable works include the Thirteen Emperors Scroll. 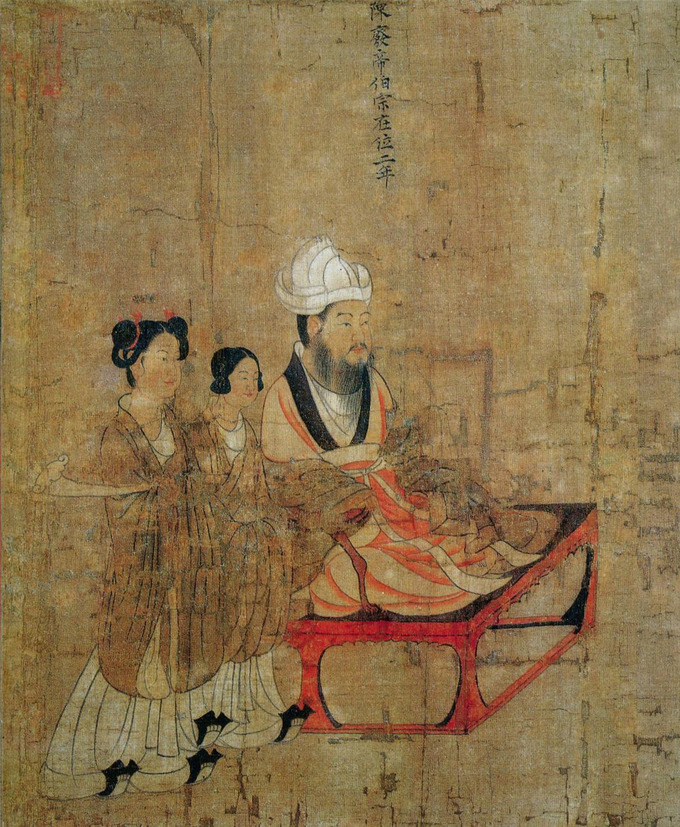 The outstanding master in this field is Wu Daozi, referred to as the “Sage of Painting”. Wu’s works include God Sending a Son and The Teaching Confucius , and he created a new technique of drawing known as “Drawing of Water Shield.” Most Tang artists outlined figures with fine black lines and used brilliant colors and elaborate detail. However, Wu Daozi used only black ink and freely painted brushstrokes to create ink paintings that were so exciting, crowds gathered to watch him work. Ink paintings were no longer preliminary sketches or outlines to be filled in with color; instead, they were valued as finished works of art. 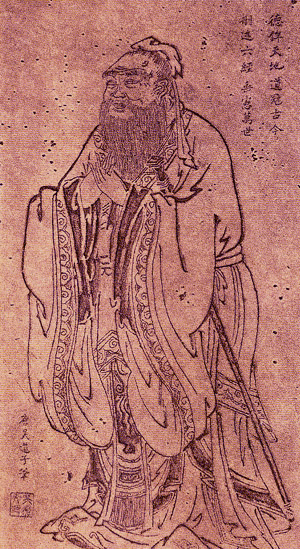 Wu Daozi, The Teaching Confucius (685-758): The painting of people peaked under the Tang Dynasty.

The great poet Wang Wei first created the brush and ink painting of shan-shui, literally “mountains and waters.” He also combined literature, especially poetry, with painting. The use of line in painting became much more calligraphic than in the early period. Li Sixun and Li Zhaodao (father and son) were the most famous painters of shan-shui. In these landscapes, which were monochromatic and sparse (a style that is collectively called shuimohua), the purpose was not to reproduce exactly the appearance of nature (the technique of realism) but rather to grasp an emotion or atmosphere so as to catch the “rhythm” of nature.