Bones are considered organs because they contain various types of tissue, such as blood, connective tissue, nerves, and bone tissue. Osteocytes, the living cells of bone tissue, form the mineral matrix of bones. There are two types of bone tissue: compact and spongy.

Compact bone (or cortical bone), forming the hard external layer of all bones, surrounds the medullary cavity (innermost part or bone marrow). It provides protection and strength to bones. Compact bone tissue consists of units called osteons or Haversian systems. Osteons are cylindrical structures that contain a mineral matrix and living osteocytes connected by canaliculi which transport blood. They are aligned parallel to the long axis of the bone. Each osteon consists of lamellae, layers of compact matrix that surround a central canal (the Haversian or osteonic canal), which contains the bone’s blood vessels and nerve fibers. Osteons in compact bone tissue are aligned in the same direction along lines of stress, helping the bone resist bending or fracturing. Therefore, compact bone tissue is prominent in areas of bone at which stresses are applied in only a few directions. 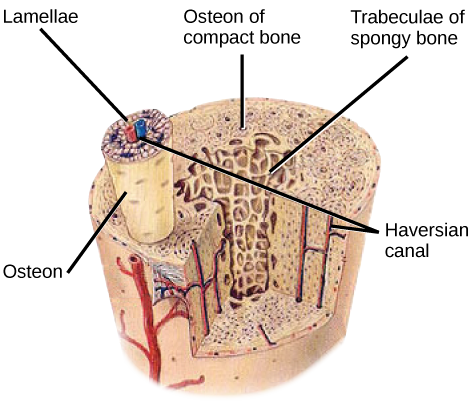 Components of compact bone tissue: Compact bone tissue consists of osteons that are aligned parallel to the long axis of the bone and the Haversian canal that contains the bone’s blood vessels and nerve fibers. The inner layer of bones consists of spongy bone tissue. The small dark ovals in the osteon represent the living osteocytes.

Compact bone tissue forms the outer layer of all bones while spongy or cancellous bone forms the inner layer of all bones. Spongy bone tissue does not contain osteons. Instead, it consists of trabeculae, which are lamellae that are arranged as rods or plates. Red bone marrow is found between the trabuculae. Blood vessels within this tissue deliver nutrients to osteocytes and remove waste. The red bone marrow of the femur and the interior of other large bones, such as the ileum, forms blood cells. 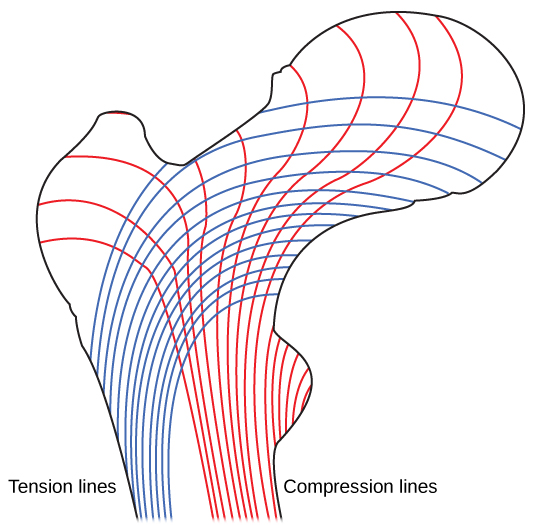 Spongy bone reduces the density of bone, allowing the ends of long bones to compress as the result of stresses applied to the bone. Spongy bone is prominent in areas of bones that are not heavily stressed or where stresses arrive from many directions. The epiphysis of a bone, such as the neck of the femur, is subject to stress from many directions. Imagine laying a heavy-framed picture flat on the floor. You could hold up one side of the picture with a toothpick if the toothpick were perpendicular to the floor and the picture. Now, drill a hole and stick the toothpick into the wall to hang up the picture. In this case, the function of the toothpick is to transmit the downward pressure of the picture to the wall. The force on the picture is straight down to the floor, but the force on the toothpick is both the picture wire pulling down and the bottom of the hole in the wall pushing up. The toothpick will break off right at the wall.

The osteoblast, osteoclast, osteocyte, and osteoprogenitor bone cells are responsible for the growing, shaping, and maintenance of bones.

Distinguish among the four cell types in bone

Bone consists of four types of cells: osteoblasts, osteoclasts, osteocytes, and osteoprogenitor (or osteogenic) cells. Each cell type has a unique function and is found in different locations in bones. The osteoblast, the bone cell responsible for forming new bone, is found in the growing portions of bone, including the periosteum and endosteum. Osteoblasts, which do not divide, synthesize and secrete the collagen matrix and calcium salts. As the secreted matrix surrounding the osteoblast calcifies, the osteoblast becomes trapped within it. As a result, it changes in structure, becoming an osteocyte, the primary cell of mature bone and the most common type of bone cell. Each osteocyte is located in a space (lacuna) surrounded by bone tissue. Osteocytes maintain the mineral concentration of the matrix via the secretion of enzymes. As is the case with osteoblasts, osteocytes lack mitotic activity. They are able to communicate with each other and receive nutrients via long cytoplasmic processes that extend through canaliculi (singular = canaliculus), channels within the bone matrix.

Bone cell types: Table listing the function and location of the four types of bone cells. 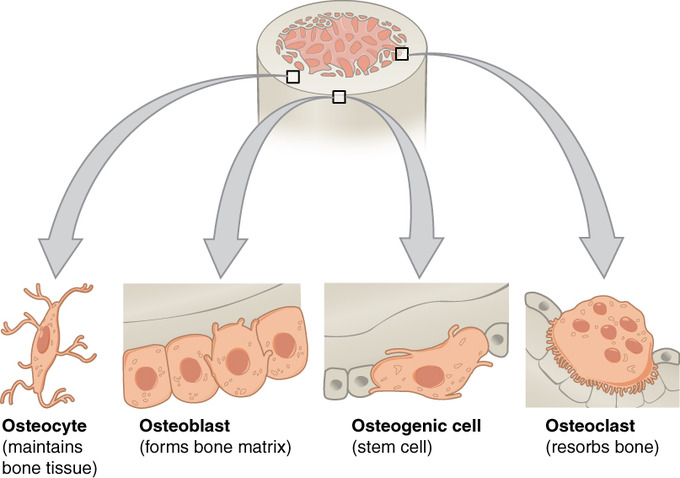 Four types of bone cells: Four types of cells are found within bone tissue. Osteogenic cells are undifferentiated and develop into osteoblasts. When osteoblasts get trapped within the calcified matrix, their structure and function changes; they become osteocytes. Osteoclasts develop from monocytes and macrophages and differ in appearance from other bone cells.

If osteoblasts and osteocytes are incapable of mitosis, then how are they replenished when old ones die? The answer lies in the properties of a third category of bone cells: the osteogenic cell. These osteogenic cells are undifferentiated with high mitotic activity; they are the only bone cells that divide. Immature osteogenic cells are found in the deep layers of the periosteum and the marrow. When they differentiate, they develop into osteoblasts. The dynamic nature of bone means that new tissue is constantly formed, while old, injured, or unnecessary bone is dissolved for repair or for calcium release. The cell responsible for bone resorption, or breakdown, is the osteoclast, which is found on bone surfaces, is multinucleated, and originates from monocytes and macrophages (two types of white blood cells) rather than from osteogenic cells. Osteoclasts continually break down old bone while osteoblasts continually form new bone. The ongoing balance between osteoblasts and osteoclasts is responsible for the constant, but subtle, reshaping of bone.

Distinguish between intramembranous and endochondral ossification

Ossification, or osteogenesis, is the process of bone formation by osteoblasts. Ossification is distinct from the process of calcification; whereas calcification takes place during the ossification of bones, it can also occur in other tissues. Ossification begins approximately six weeks after fertilization in an embryo. Before this time, the embryonic skeleton consists entirely of fibrous membranes and hyaline cartilage. The development of bone from fibrous membranes is called intramembranous ossification; development from hyaline cartilage is called endochondral ossification. Bone growth continues until approximately age 25. Bones can grow in thickness throughout life, but after age 25, ossification functions primarily in bone remodeling and repair.

Intramembranous ossification is the process of bone development from fibrous membranes. It is involved in the formation of the flat bones of the skull, the mandible, and the clavicles. Ossification begins as mesenchymal cells form a template of the future bone. They then differentiate into osteoblasts at the ossification center. Osteoblasts secrete the extracellular matrix and deposit calcium, which hardens the matrix. The non-mineralized portion of the bone or osteoid continues to form around blood vessels, forming spongy bone. Connective tissue in the matrix differentiates into red bone marrow in the fetus. The spongy bone is remodeled into a thin layer of compact bone on the surface of the spongy bone.

In long bones, chondrocytes form a template of the hyaline cartilage diaphysis. Responding to complex developmental signals, the matrix begins to calcify. This calcification prevents diffusion of nutrients into the matrix, resulting in chondrocytes dying and the opening up of cavities in the diaphysis cartilage. Blood vessels invade the cavities, while osteoblasts and osteoclasts modify the calcified cartilage matrix into spongy bone. Osteoclasts then break down some of the spongy bone to create a marrow, or medullary cavity, in the center of the diaphysis. Dense, irregular connective tissue forms a sheath (periosteum) around the bones. The periosteum assists in attaching the bone to surrounding tissues, tendons, and ligaments. The bone continues to grow and elongate as the cartilage cells at the epiphyses divide.

In the last stage of prenatal bone development, the centers of the epiphyses begin to calcify. Secondary ossification centers form in the epiphyses as blood vessels and osteoblasts enter these areas and convert hyaline cartilage into spongy bone. Until adolescence, hyaline cartilage persists at the epiphyseal plate (growth plate), which is the region between the diaphysis and epiphysis that is responsible for the lengthwise growth of long bones.

Long bones lengthen at the epiphyseal plate with the addition of bone tissue and increase in width by a process called appositional growth.

Describe the processes of post-fetal bone growth and bone thickening

Long bones continue to lengthen (potentially throughout adolescence) through the addition of bone tissue at the epiphyseal plate. They also increase in width through appositional growth.

The epiphyseal plate is composed of four zones of cells and activity. 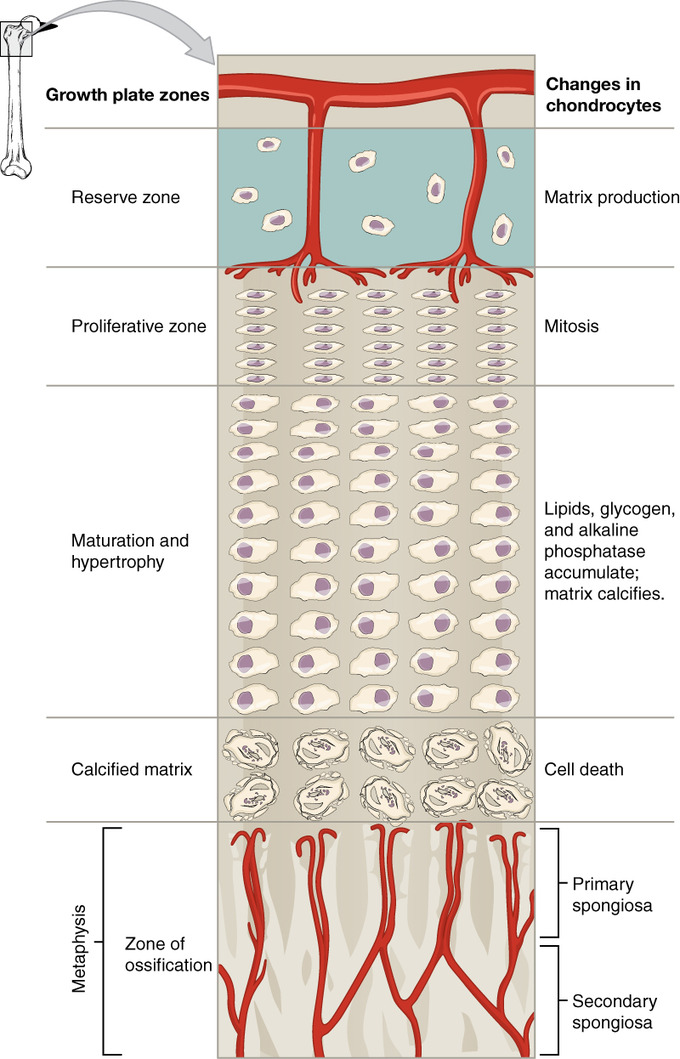 Longitudinal bone growth: The epiphyseal plate is responsible for longitudinal bone growth. This illustration shows the zones bordering the epiphyseal plate of the epiphysis. The topmost layer of the epiphysis is the reserve zone. The second zone, the proliferative zone, is where chondrocytes are continually undergoing mitosis. The next zone is the zone of maturation and hypertrophy where lipids, glycogen, and alkaline phosphatase accumulate, causing the cartilaginous matrix to calcify. The following zone is the calcified matrix where the chondrocytes have hardened and die as the matrix around them has calcified. The bottom-most row is the zone of ossification which is part of the metaphysis. The newly-deposited bone tissue at the top of the zone of ossification is called the primary spongiosa, while the older bone is labeled the secondary spongiosa. 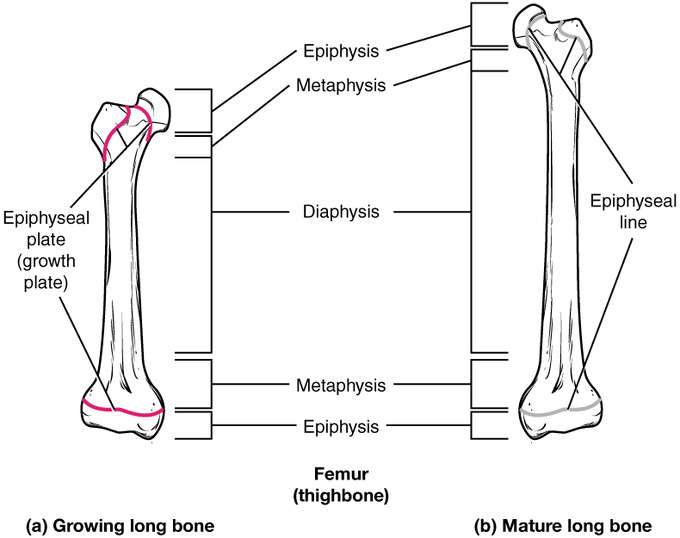 While bones are increasing in length, they are also increasing in diameter; growth in diameter can continue even after longitudinal growth ceases. This is called appositional growth. Osteoclasts, cells that work to break down bone, resorb old bone that lines the medullary cavity. At the same time, osteoblasts via intramembranous ossification, produce new bone tissue beneath the periosteum. The erosion of old bone along the medullary cavity and the deposition of new bone beneath the periosteum not only increase the diameter of the diaphysis, but also increase the diameter of the medullary cavity. This process is called modeling.

Bone is remodeled through the continual replacement of old bone tissue, as well as repaired when fractured.

Outline the process of bone remodeling and repair

Bone renewal continues after birth into adulthood. Bone remodeling is the replacement of old bone tissue by new bone tissue. It involves the processes of bone deposition or bone production done by osteoblasts and bone resorption done by osteoclasts, which break down old bone. Normal bone growth requires vitamins D, C, and A, plus minerals such as calcium, phosphorous, and magnesium. Hormones such as parathyroid hormone, growth hormone, and calcitonin are also required for proper bone growth and maintenance.

Bone turnover rates, the rates at which old bone is replaced by new bone, are quite high, with five to seven percent of bone mass being recycled every week. Differences in turnover rates exist in different areas of the skeleton and in different areas of a bone. For example, the bone in the head of the femur may be fully replaced every six months, whereas the bone along the shaft is altered much more slowly.

Bone remodeling allows bones to adapt to stresses by becoming thicker and stronger when subjected to stress. Bones that are not subject to normal everyday stress (for example, when a limb is in a cast) will begin to lose mass.

Stages of fracture repair: The healing of a bone fracture follows a series of progressive steps: (a) A fracture hematoma forms. (b) Internal and external calli form. (c) Cartilage of the calli is replaced by trabecular bone. (d) Remodeling occurs.

A fractured or broken bone undergoes repair through four stages: