Fungi, latin for mushroom, are eukaryotes which are responsible for decomposition and nutrient cycling through the environment.

Describe the role of fungi in the ecosystem

The word fungus comes from the Latin word for mushrooms. Indeed, the familiar mushroom is a reproductive structure used by many types of fungi. However, there are also many fungi species that don’t produce mushrooms at all. Being eukaryotes, a typical fungal cell contains a true nucleus and many membrane-bound organelles. The kingdom Fungi includes an enormous variety of living organisms collectively referred to as Ascomycota, or true Fungi. While scientists have identified about 100,000 species of fungi, this is only a fraction of the 1.5 million species of fungus probably present on earth. Edible mushrooms, yeasts, black mold, and the producer of the antibiotic penicillin, Penicillium notatum, are all members of the kingdom Fungi, which belongs to the domain Eukarya.

Examples of fungi: Many species of fungus produce the familiar mushroom (a) which is a reproductive structure. This (b) coral fungus displays brightly-colored fruiting bodies. This electron micrograph shows (c) the spore-bearing structures of Aspergillus, a type of toxic fungi found mostly in soil and plants.

Fungi, once considered plant-like organisms, are more closely related to animals than plants. Fungi are not capable of photosynthesis: they are heterotrophic because they use complex organic compounds as sources of energy and carbon. Some fungal organisms multiply only asexually, whereas others undergo both asexual reproduction and sexual reproduction with alternation of generations. Most fungi produce a large number of spores, which are haploid cells that can undergo mitosis to form multicellular, haploid individuals. Like bacteria, fungi play an essential role in ecosystems because they are decomposers and participate in the cycling of nutrients by breaking down organic and inorganic materials to simple molecules.

Fungi often interact with other organisms, forming beneficial or mutualistic associations. For example most terrestrial plants form symbiotic relationships with fungi. The roots of the plant connect with the underground parts of the fungus forming mycorrhizae. Through mycorrhizae, the fungus and plant exchange nutrients and water, greatly aiding the survival of both species Alternatively, lichens are an association between a fungus and its photosynthetic partner (usually an alga). Fungi also cause serious infections in plants and animals. For example, Dutch elm disease, which is caused by the fungus Ophiostoma ulmi, is a particularly devastating type of fungal infestation that destroys many native species of elm (Ulmus sp.) by infecting the tree’s vascular system. The elm bark beetle acts as a vector, transmitting the disease from tree to tree. Accidentally introduced in the 1900s, the fungus decimated elm trees across the continent. Many European and Asiatic elms are less susceptible to Dutch elm disease than American elms.

In humans, fungal infections are generally considered challenging to treat. Unlike bacteria, fungi do not respond to traditional antibiotic therapy because they are eukaryotes. Fungal infections may prove deadly for individuals with compromised immune systems.

Fungi have many commercial applications. The food industry uses yeasts in baking, brewing, and cheese and wine making. Many industrial compounds are byproducts of fungal fermentation. Fungi are the source of many commercial enzymes and antibiotics.

Fungi are eukaryotes and have a complex cellular organization. As eukaryotes, fungal cells contain a membrane-bound nucleus where the DNA is wrapped around histone proteins. A few types of fungi have structures comparable to bacterial plasmids (loops of DNA). Fungal cells also contain mitochondria and a complex system of internal membranes, including the endoplasmic reticulum and Golgi apparatus.

Unlike plant cells, fungal cells do not have chloroplasts or chlorophyll. Many fungi display bright colors arising from other cellular pigments, ranging from red to green to black. The poisonous Amanita muscaria (fly agaric) is recognizable by its bright red cap with white patches. Pigments in fungi are associated with the cell wall. They play a protective role against ultraviolet radiation and can be toxic. 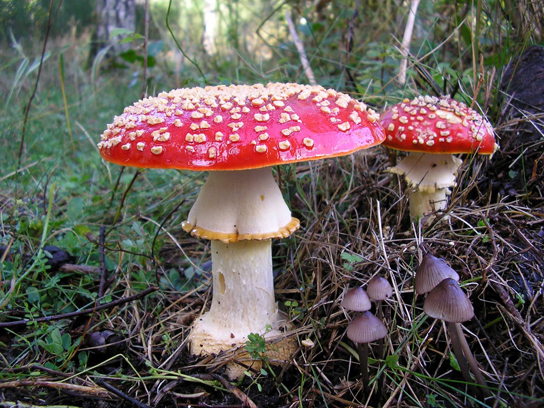 The rigid layers of fungal cell walls contain complex polysaccharides called chitin and glucans. Chitin, also found in the exoskeleton of insects, gives structural strength to the cell walls of fungi. The wall protects the cell from desiccation and predators. Fungi have plasma membranes similar to other eukaryotes, except that the structure is stabilized by ergosterol: a steroid molecule that replaces the cholesterol found in animal cell membranes. Most members of the kingdom Fungi are nonmotile. 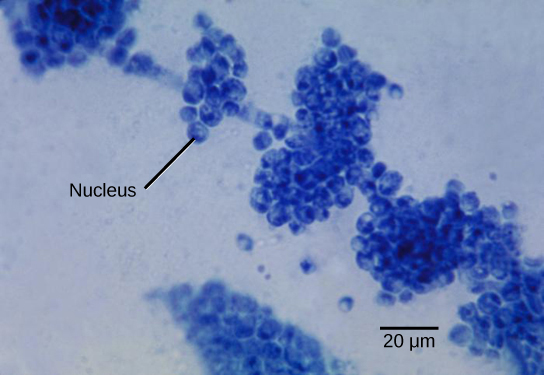 Example of a unicellular fungus: Candida albicans is a yeast cell and the agent of candidiasis and thrush. This organism has a similar morphology to coccus bacteria; however, yeast is a eukaryotic organism (note the nucleus).

Most fungi are multicellular organisms. They display two distinct morphological stages: the vegetative and reproductive. The vegetative stage consists of a tangle of slender thread-like structures called hyphae (singular, hypha ), whereas the reproductive stage can be more conspicuous. The mass of hyphae is a mycelium. It can grow on a surface, in soil or decaying material, in a liquid, or even on living tissue. Although individual hyphae must be observed under a microscope, the mycelium of a fungus can be very large, with some species truly being “the fungus humongous.” The giant Armillaria solidipes (honey mushroom) is considered the largest organism on Earth, spreading across more than 2,000 acres of underground soil in eastern Oregon; it is estimated to be at least 2,400 years old. 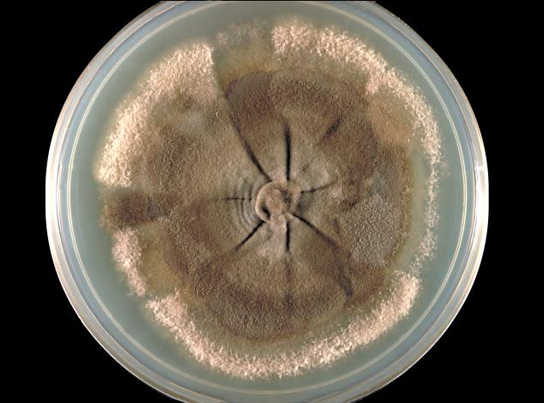 Example of a mycelium of a fungus: The mycelium of the fungus Neotestudina rosati can be pathogenic to humans. The fungus enters through a cut or scrape and develops a mycetoma, a chronic subcutaneous infection.

Most fungal hyphae are divided into separate cells by endwalls called septa (singular, septum) ( a, c). In most phyla of fungi, tiny holes in the septa allow for the rapid flow of nutrients and small molecules from cell to cell along the hypha. They are described as perforated septa. The hyphae in bread molds (which belong to the Phylum Zygomycota) are not separated by septa. Instead, they are formed by large cells containing many nuclei, an arrangement described as coenocytic hyphae ( b). Fungi thrive in environments that are moist and slightly acidic; they can grow with or without light. 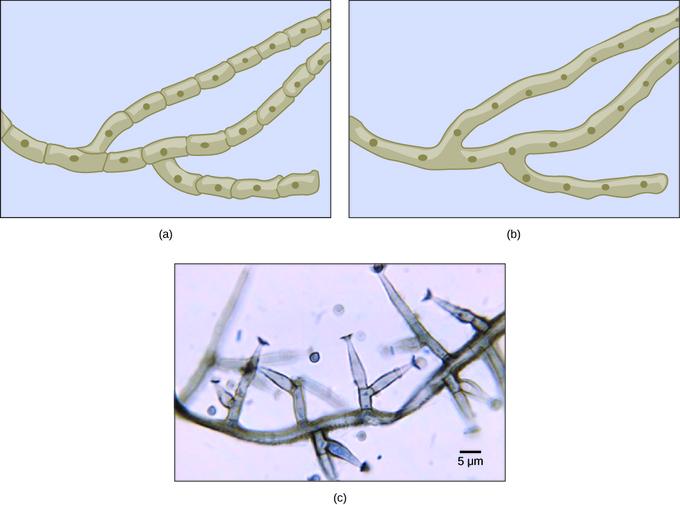 Division of hyphae into separate cells: Fungal hyphae may be (a) septated or (b) coenocytic (coeno- = “common”; -cytic = “cell”) with many nuclei present in a single hypha. A bright field light micrograph of (c) Phialophora richardsiae shows septa that divide the hyphae.

Like animals, fungi are heterotrophs: they use complex organic compounds as a source of carbon, rather than fix carbon dioxide from the atmosphere as do some bacteria and most plants. In addition, fungi do not fix nitrogen from the atmosphere. Like animals, they must obtain it from their diet. However, unlike most animals, which ingest food and then digest it internally in specialized organs, fungi perform these steps in the reverse order: digestion precedes ingestion. First, exoenzymes are transported out of the hyphae, where they process nutrients in the environment. Then, the smaller molecules produced by this external digestion are absorbed through the large surface area of the mycelium. As with animal cells, the polysaccharide of storage is glycogen rather than the starch found in plants.

Fungi are mostly saprobes (saprophyte is an equivalent term): organisms that derive nutrients from decaying organic matter. They obtain their nutrients from dead or decomposing organic matter, mainly plant material. Fungal exoenzymes are able to break down insoluble polysaccharides, such as the cellulose and lignin of dead wood, into readily-absorbable glucose molecules. The carbon, nitrogen, and other elements are thus released into the environment. Because of their varied metabolic pathways, fungi fulfill an important ecological role and are being investigated as potential tools in bioremediation.

Some fungi are parasitic, infecting either plants or animals. Smut and Dutch elm disease affect plants, whereas athlete’s foot and candidiasis (thrush) are medically important fungal infections in humans.

Fungi can reproduce asexually by fragmentation, budding, or producing spores, or sexually with homothallic or heterothallic mycelia.

Describe the mechanisms of sexual and asexual reproduction in fungi

In both sexual and asexual reproduction, fungi produce spores that disperse from the parent organism by either floating on the wind or hitching a ride on an animal. Fungal spores are smaller and lighter than plant seeds. The giant puffball mushroom bursts open and releases trillions of spores. The huge number of spores released increases the likelihood of landing in an environment that will support growth. 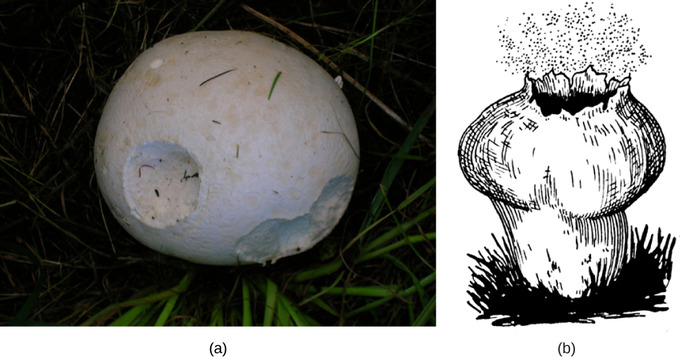 The release of fungal spores: The (a) giant puff ball mushroom releases (b) a cloud of spores when it reaches maturity.

Fungi reproduce asexually by fragmentation, budding, or producing spores. Fragments of hyphae can grow new colonies. Mycelial fragmentation occurs when a fungal mycelium separates into pieces with each component growing into a separate mycelium. Somatic cells in yeast form buds. During budding (a type of cytokinesis), a bulge forms on the side of the cell, the nucleus divides mitotically, and the bud ultimately detaches itself from the mother cell.

The most common mode of asexual reproduction is through the formation of asexual spores, which are produced by one parent only (through mitosis) and are genetically identical to that parent. Spores allow fungi to expand their distribution and colonize new environments. They may be released from the parent thallus, either outside or within a special reproductive sac called a sporangium. 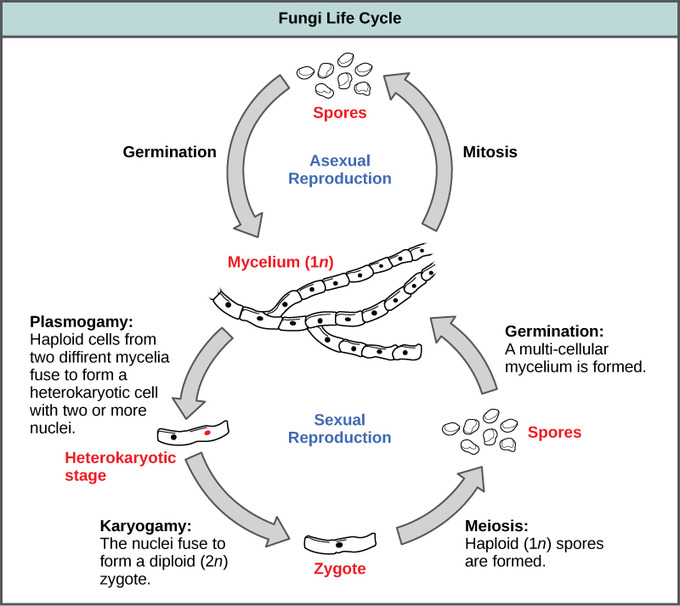 There are many types of asexual spores. Conidiospores are unicellular or multicellular spores that are released directly from the tip or side of the hypha. Other asexual spores originate in the fragmentation of a hypha to form single cells that are released as spores; some of these have a thick wall surrounding the fragment. Yet others bud off the vegetative parent cell. Sporangiospores are produced in a sporangium. 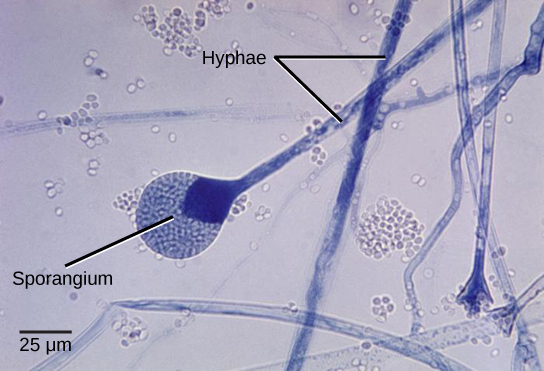 Sexual reproduction introduces genetic variation into a population of fungi. In fungi, sexual reproduction often occurs in response to adverse environmental conditions. Two mating types are produced. When both mating types are present in the same mycelium, it is called homothallic, or self-fertile. Heterothallic mycelia require two different, but compatible, mycelia to reproduce sexually.

Although there are many variations in fungal sexual reproduction, all include the following three stages. First, during plasmogamy (literally, “marriage or union of cytoplasm”), two haploid cells fuse, leading to a dikaryotic stage where two haploid nuclei coexist in a single cell. During karyogamy (“nuclear marriage”), the haploid nuclei fuse to form a diploid zygote nucleus. Finally, meiosis takes place in the gametangia (singular, gametangium) organs, in which gametes of different mating types are generated. At this stage, spores are disseminated into the environment.