Define aneuploidy and explain how this condition results from nondisjunction

Of all of the chromosomal disorders, abnormalities in chromosome number are the most obviously identifiable from a karyotype and are referred to as aneuploidy. Aneuploidy is a condition in which one or more chromosomes are present in extra copies or are deficient in number, but not a complete set. To be more specific, the loss of a single chromosome from a diploid genome is called monosomy (2n-1). The gain of one chromosome is called trisomy (2n+1).They are caused by nondisjunction, which occurs when pairs of homologous chromosomes or sister chromatids fail to separate during meiosis. Misaligned or incomplete synapsis, or a dysfunction of the spindle apparatus that facilitates chromosome migration, can cause nondisjunction. The risk of nondisjunction occurring increases with the age of the parents. 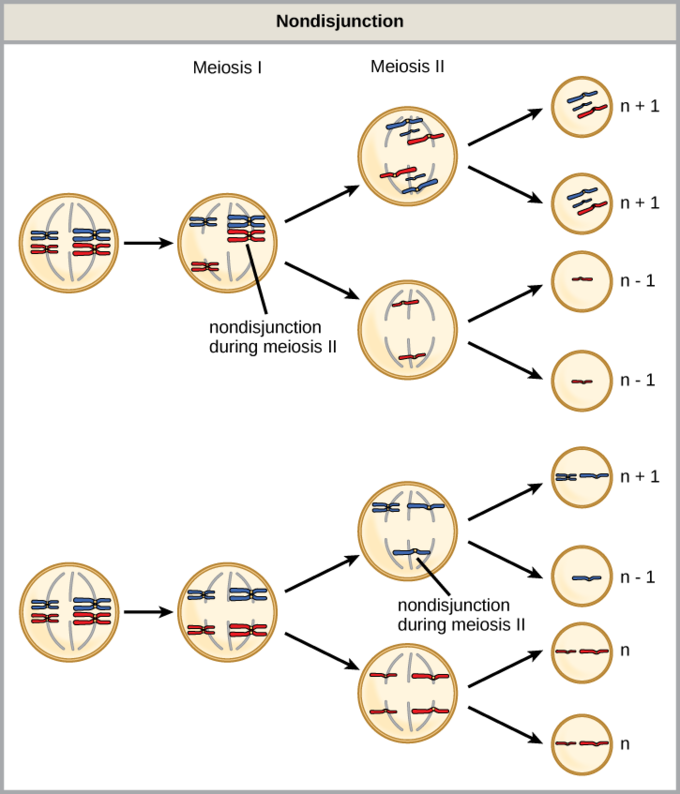 Aneuploidy often results in serious problems such as Turner syndrome, a monosomy in which females may contain all or part of an X chromosome. Monosomy for autosomes is usually lethal in humans and other animals. Klinefelter syndrome is a trisomy genetic disorder in males caused by the presence of one or more X chromosomes. The effects of trisomy are similar to those of monosomy. Down syndrome is the only autosomal trisomy in humans that has a substantial number of survivors one year after birth. Trisomy in chromosome 21 is the cause of Down syndrome; it affects 1 infant in every 800 live births.

Structural rearrangements of chromosomes include both inversions and translocations, which may have detrimental effects on an organism.

A chromosome inversion is the detachment, 180° rotation, and reinsertion of part of a chromosome. Inversions may occur in nature as a result of mechanical shear, or from the action of transposable elements (special DNA sequences capable of facilitating the rearrangement of chromosome segments with the help of enzymes that cut and paste DNA sequences). Unless they disrupt a gene sequence, inversions only change the orientation of genes and are likely to have milder effects than aneuploid errors. However, altered gene orientation can result in functional changes because regulators of gene expression could be moved out of position with respect to their targets, causing aberrant levels of gene products. 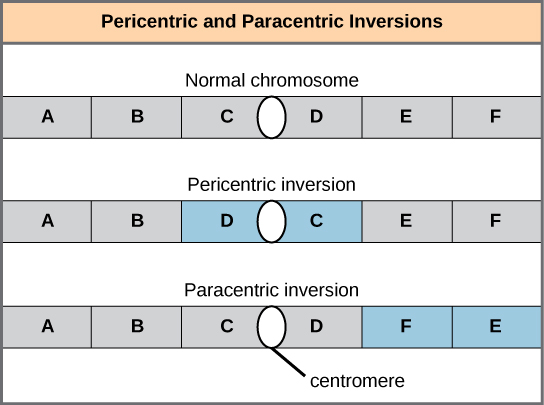 When one homologous chromosome undergoes an inversion, but the other does not, the individual is described as an inversion heterozygote. To maintain point-for-point synapsis during meiosis, one homolog must form a loop, and the other homolog must mold around it. Although this topology can ensure that the genes are correctly aligned, it also forces the homologs to stretch and can be associated with regions of imprecise synapsis. 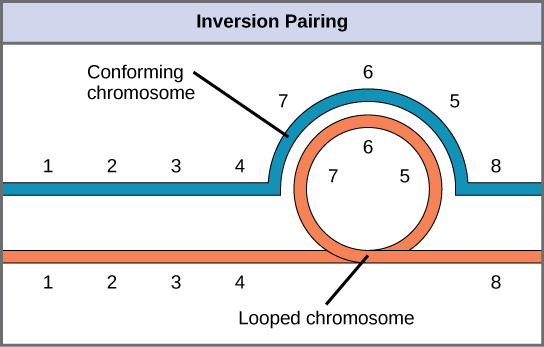 Inversion heterozygotes: When one chromosome undergoes an inversion, but the other does not, one chromosome must form an inverted loop to retain point-for-point interaction during synapsis. This inversion pairing is essential to maintaining gene alignment during meiosis and to allow for recombination. 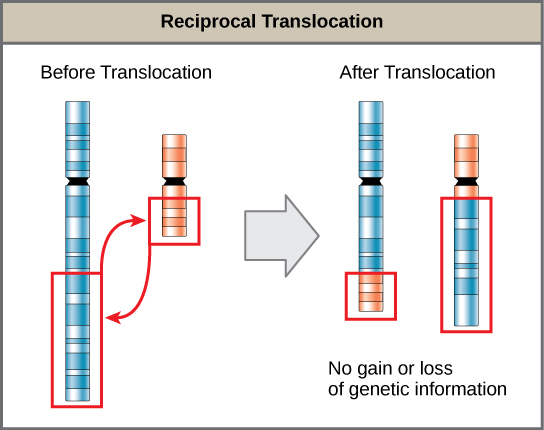 The presence of extra X chromosomes in a cell is compensated for by X-inactivation in which all but one X chromosome are silenced.

Explain how and why X inactivation occurs in humans

Humans display dramatic deleterious effects with autosomal trisomies and monosomies. Therefore, it may seem counterintuitive that human females and males can function normally, despite carrying different numbers of the X chromosome. Rather than a gain or loss of autosomes, variations in the number of X chromosomes are associated with relatively mild effects. In part, this occurs because of a molecular process called X inactivation. Early in development, when female mammalian embryos consist of just a few thousand cells (relative to trillions in the newborn), one X chromosome in each cell inactivates by tightly condensing into a quiescent (dormant) structure called a Barr body. The chance that an X chromosome (maternally or paternally derived ) is inactivated in each cell is random, but once the inactivation occurs, all cells derived from that single cell will have the same inactive X chromosome or Barr body.

By this process, a phenomenon called dosage compensation is achieved. Females possess two X chromosomes, while males have only one; therefore, if both X chromosomes remained active in the female, they would produce twice as much product from the genes on the X chromosomes as males. 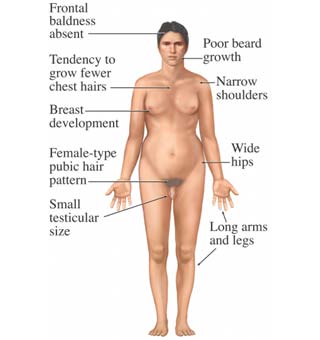 Sex Chromosome Nondisjunction: The symptoms of Klinefelter’s syndrome (XXY) in a human male.

Several errors in sex chromosome number have been characterized. Individuals with three X chromosomes, called triplo-X, are phenotypically female, but express developmental delays and reduced fertility. The XXY genotype, corresponding to one type of Klinefelter syndrome, corresponds to phenotypically male individuals with small testes, enlarged breasts, and reduced body hair. More complex types of Klinefelter syndrome exist in which the individual has as many as five X chromosomes. In all types, every X chromosome except one undergoes inactivation to compensate for the excess genetic dosage. This can be seen as several Barr bodies in each cell nucleus. Turner syndrome, characterized as an X0 genotype (i.e., only a single sex chromosome), corresponds to a phenotypically female individual with short stature, webbed skin in the neck region, hearing and cardiac impairments, and sterility.

In addition to the loss or gain of an entire chromosome, a chromosomal segment may be duplicated or lost. Duplications and deletions often produce offspring that survive but exhibit physical and mental abnormalities. Duplicated chromosomal segments may fuse to existing chromosomes or may be free in the nucleus. Cri-du-chat (from the French for “cry of the cat”) is a syndrome associated with nervous system abnormalities and identifiable physical features that result from a deletion of most of 5p (the small arm of chromosome 5). Infants with this genotype emit a characteristic high-pitched cry on which the disorder’s name is based. 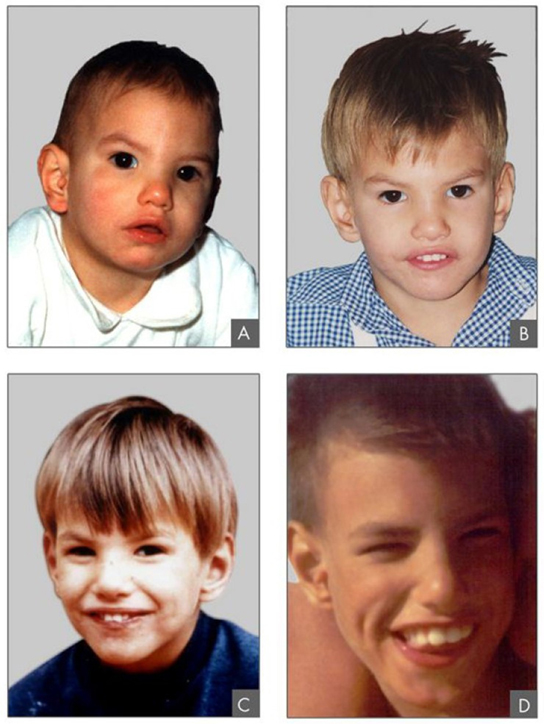 Cri-du-chat Syndrome: This individual with cri-du-chat syndrome is shown at two, four, nine, and 12 years of age.