External factors can influence the cell cycle by inhibiting or initiating cell division.

Unlike the life of organisms, which is a straight progression from birth to death, the life of a cell takes place in a cyclical pattern. Each cell is produced as part of its parent cell. When a daughter cell divides, it turns into two new cells, which would lead to the assumption that each cell is capable of being immortal as long as its descendants can continue to divide. However, all cells in the body only live as long as the organism lives. Some cells do live longer than others, but eventually all cells die when their vital functions cease. Most cells in the body exist in the state of interphase, the non-dividing stage of the cell life cycle. When this stage ends, cells move into the dividing part of their lives called mitosis. 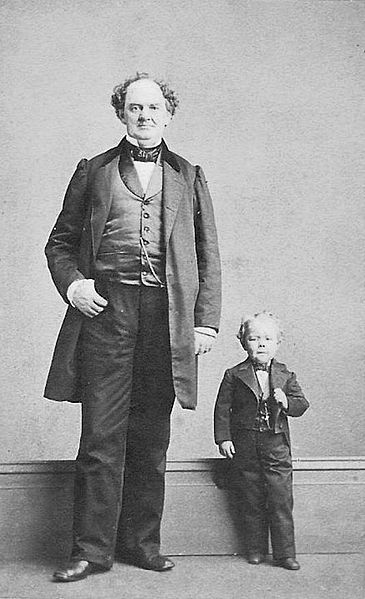 Dwarfism: Commodore Nut (right) was a famous circus performer afflicted with dwarfism. This was a result of a lack of Human Growth Hormone.

Regulation of the Cell Cycle at Internal Checkpoints

The cell cycle is controlled by three internal checkpoints that evaluate the condition of the genetic information.

It is essential that the daughter cells are exact duplicates of the parent cell. Mistakes in the duplication or distribution of the chromosomes lead to mutations that may be passed forward to every new cell produced from an abnormal cell. To prevent a compromised cell from continuing to divide, internal control mechanisms operate at three main cell cycle checkpoints. A checkpoint is one of several points in the eukaryotic cell cycle at which the progression of a cell to the next stage in the cycle can be halted until conditions are favorable (e.g. the DNA is repaired). These checkpoints occur near the end of G1, at the G2/M transition, and during metaphase. 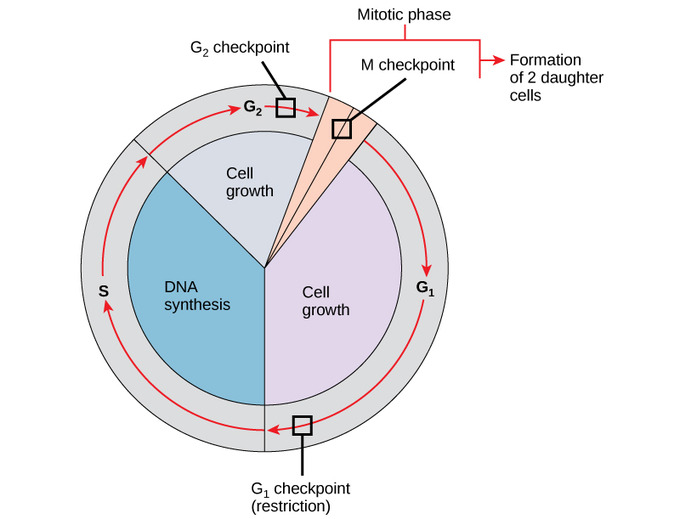 The G1 checkpoint determines whether all conditions are favorable for cell division to proceed. The G1 checkpoint, also called the restriction point (in yeast), is a point at which the cell irreversibly commits to the cell division process. External influences, such as growth factors, play a large role in carrying the cell past the G1 checkpoint. The cell will only pass the checkpoint if it is an appropriate size and has adequate energy reserves. At this point, the cell also checks for DNA damage. A cell that does not meet all the requirements will not progress to the S phase. The cell can halt the cycle and attempt to remedy the problematic condition, or the cell can advance into G0 (inactive) phase and await further signals when conditions improve.

If a cell meets the requirements for the G1 checkpoint, the cell will enter S phase and begin DNA replication. This transition, as with all of the major checkpoint transitions in the cell cycle, is signaled by cyclins and cyclin dependent kinases (CDKs). Cyclins are cell-signaling molecules that regulate the cell cycle.

The G2 checkpoint bars entry into the mitotic phase if certain conditions are not met. As with the G1 checkpoint, cell size and protein reserves are assessed. However, the most important role of the G2 checkpoint is to ensure that all of the chromosomes have been accurately replicated without mistakes or damage. If the checkpoint mechanisms detect problems with the DNA, the cell cycle is halted and the cell attempts to either complete DNA replication or repair the damaged DNA. If the DNA has been correctly replicated, cyclin dependent kinases (CDKs) signal the beginning of mitotic cell division.

The cell cycle is controlled by regulator molecules that either promote the process or stop it from progressing.

Differentiate among the molecules that regulate the cell cycle

In addition to the internally controlled checkpoints, there are two groups of intracellular molecules that regulate the cell cycle. These regulatory molecules either promote progress of the cell to the next phase (positive regulation) or halt the cycle (negative regulation). Regulator molecules may act individually or they can influence the activity or production of other regulatory proteins. Therefore, the failure of a single regulator may have almost no effect on the cell cycle, especially if more than one mechanism controls the same event. Conversely, the effect of a deficient or non-functioning regulator can be wide-ranging and possibly fatal to the cell if multiple processes are affected.

Two groups of proteins, called cyclins and cyclin-dependent kinases (Cdks), are responsible for the progress of the cell through the various checkpoints. The levels of the four cyclin proteins fluctuate throughout the cell cycle in a predictable pattern. Increases in the concentration of cyclin proteins are triggered by both external and internal signals. After the cell moves to the next stage of the cell cycle, the cyclins that were active in the previous stage are degraded. 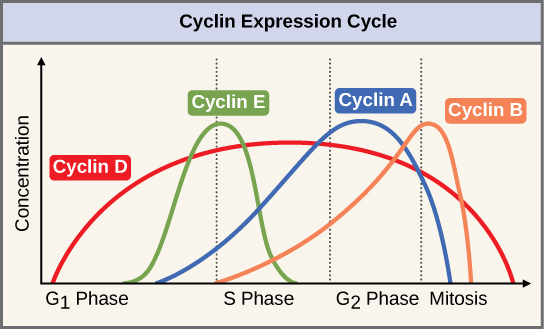 Cyclins regulate the cell cycle only when they are tightly bound to Cdks. To be fully active, the Cdk/cyclin complex must also be phosphorylated in specific locations. Like all kinases, Cdks are enzymes (kinases) that phosphorylate other proteins. Phosphorylation activates the protein by changing its shape. The proteins phosphorylated by Cdks are involved in advancing the cell to the next phase.. The levels of Cdk proteins are relatively stable throughout the cell cycle; however, the concentrations of cyclin fluctuate and determine when Cdk/cyclin complexes form. The different cyclins and Cdks bind at specific points in the cell cycle and thus regulate different checkpoints. 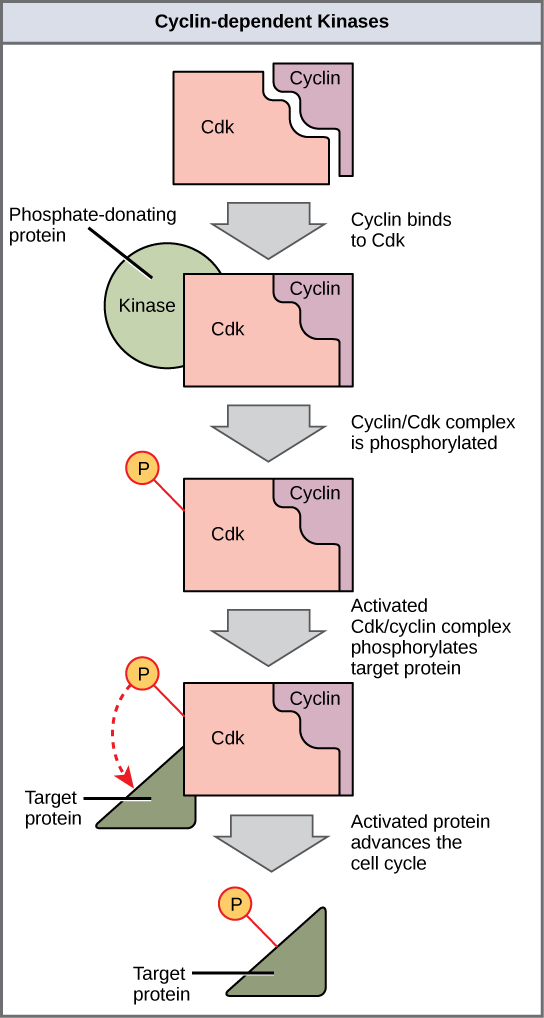 Activation of Cdks: Cyclin-dependent kinases (Cdks) are protein kinases that, when fully activated, can phosphorylate and activate other proteins that advance the cell cycle past a checkpoint. To become fully activated, a Cdk must bind to a cyclin protein and then be phosphorylated by another kinase.

Although the cyclins are the main regulatory molecules that determine the forward momentum of the cell cycle, there are several other mechanisms that fine tune the progress of the cycle with negative, rather than positive, effects. These mechanisms essentially block the progression of the cell cycle until problematic conditions are resolved. Molecules that prevent the full activation of Cdks are called Cdk inhibitors. Many of these inhibitor molecules directly or indirectly monitor a particular cell cycle event. The block placed on Cdks by inhibitor molecules will not be removed until the specific event being monitored is completed.

The best understood negative regulatory molecules are retinoblastoma protein (Rb), p53, and p21. Retinoblastoma proteins are a group of tumor-suppressor proteins common in many cells. Much of what is known about cell cycle regulation comes from research conducted with cells that have lost regulatory control. All three of these regulatory proteins were discovered to be damaged or non-functional in cells that had begun to replicate uncontrollably (became cancerous). In each case, the main cause of the unchecked progress through the cell cycle was a faulty copy of the regulatory protein.

Rb, p53, and p21 act primarily at the G1 checkpoint. p53 is a multi-functional protein that has a major impact on the cell’s commitment to division; it acts when there is damaged DNA in cells that are undergoing the preparatory processes during G1. If damaged DNA is detected, p53 halts the cell cycle and recruits enzymes to repair the DNA. If the DNA cannot be repaired, p53 can trigger apoptosis (cell suicide) to prevent the duplication of damaged chromosomes. As p53 levels rise, the production of p21 is triggered. p21 enforces the halt in the cycle dictated by p53 by binding to and inhibiting the activity of the Cdk/cyclin complexes. As a cell is exposed to more stress, higher levels of p53 and p21 accumulate, making it less likely that the cell will move into the S phase.

Rb exerts its regulatory influence on other positive regulator proteins. Rb monitors cell size. In the active, dephosphorylated state, Rb binds to proteins called transcription factors, most commonly to E2F. Transcription factors “turn on” specific genes, allowing the production of proteins encoded by that gene. When Rb is bound to E2F, production of proteins necessary for the G1/S transition is blocked. As the cell increases in size, Rb is slowly phosphorylated until it becomes inactivated. Rb releases E2F, which can now turn on the gene that produces the transition protein and this particular block is removed. For the cell to move past each of the checkpoints, all positive regulators must be “turned on” and all negative regulators must be “turned off.” 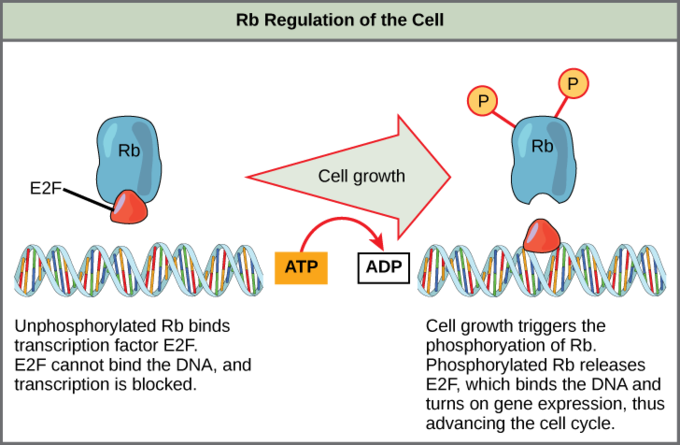 Function of the Rb Regulator Molecule: Rb halts the cell cycle by binding E2F. Rb releases its hold on E2F in response to cell growth to advance the cell cycle.