Gas pressures in the atmosphere and body determine gas exchange: both O2 and CO2 will flow from areas of high to low pressure.

Describe how gas pressure influences the flow of gases during respiration

The respiratory process can be better understood by examining the properties of gases. Gases move freely with their movement resulting in the constant hitting of particles against vessel walls. This collision between gas particles and vessel walls produces gas pressure. 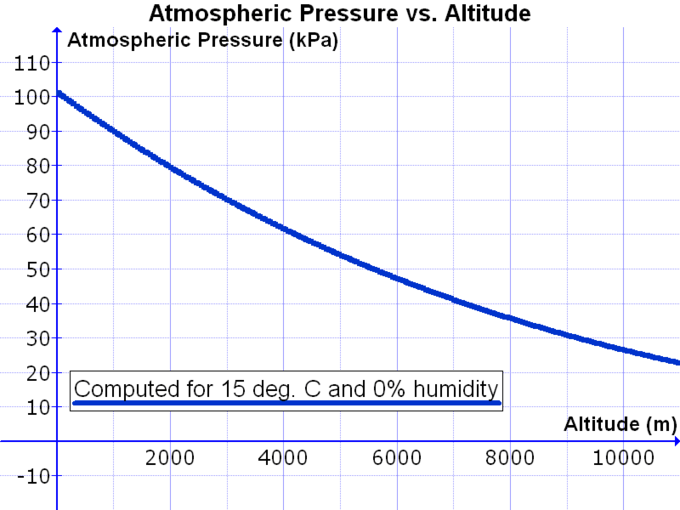 Atmospheric pressure vs altitude: At high altitudes, there is a decrease in Patm, causing the partial pressures to decrease as well.

These pressures determine the gas exchange, or the flow of gas, in the system. Oxygen and carbon dioxide will flow according to their pressure gradient from high to low. Therefore, understanding the partial pressure of each gas will aid in understanding how gases move in the respiratory system.

The purpose of respiration is to perform gas exchange, a process that involves ventilation and perfusion and that relies on the laws of partial pressure. 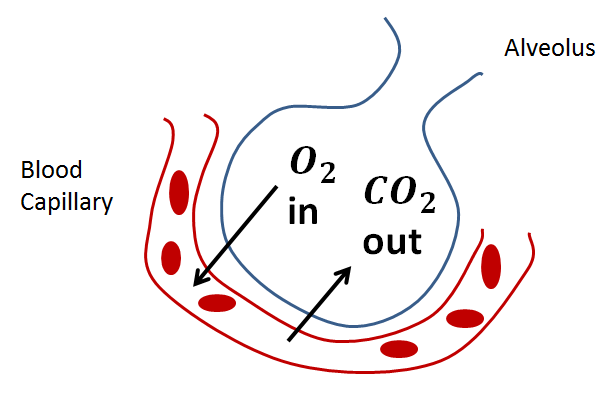 Gas exchange: This illustrates the exchange of gas in humans between a capillary and an alveolus.

Lung volumes measure the amount of air for a specific function, while lung capacities are the sum of two or more volumes.

Different animals exhibit different lung capacities based on their activities. For example, cheetahs have evolved a much higher lung capacity than humans in order to provide oxygen to all the muscles in the body, allowing them to run very fast. Elephants also have a high lung capacity due to their large body and their need to take up oxygen in accordance with their body size.

Human lung size is determined by genetics, gender, and height. At maximal capacity, an average lung can hold almost six liters of air; however, lungs do not usually operate at maximal capacity. Air in the lungs is measured in terms of lung volumes and lung capacities. Volume measures the amount of air for one function (such as inhalation or exhalation) and capacity is any two or more volumes (for example, how much can be inhaled from the end of a maximal exhalation).

Lung volumes are measured by a technique called spirometry. An important measurement taken during spirometry is the forced expiratory volume (FEV), which measures how much air can be forced out of the lung over a specific period, usually one second (FEV1). In addition, the forced vital capacity (FVC), which is the total amount of air that can be forcibly exhaled, is measured. The ratio of these values (FEV1/FVC ratio) is used to diagnose lung diseases including asthma, emphysema, and fibrosis. If the FEV1/FVC ratio is high, the lungs are not compliant (meaning they are stiff and unable to bend properly); the patient probably has lung fibrosis. Patients exhale most of the lung volume very quickly. Conversely, when the FEV1/FVC ratio is low, there is resistance in the lung that is characteristic of asthma. In this instance, it is difficult for the patient to get the air out of his or her lungs. It takes a long time to reach the maximal exhalation volume. In either case, breathing is difficult and complications arise.

Differences in partial pressures of O2 create a gradient that causes oxygen to move from the alveoli to the capillaries and into tissues.

Explain the process of gas exchange across the alveoli

In the human body, oxygen is used by cells of the body’s tissues to produce ATP, while carbon dioxide is produced as a waste product. The ratio of carbon dioxide production to oxygen consumption is referred to as the respiratory quotient (RQ), which typically varies between 0.7 and 1.0. If glucose alone were used to fuel the body, the RQ would equal one, as one mole of carbon dioxide would be produced for every mole of oxygen consumed. Glucose, however, is not the only fuel for the body; both proteins and fats are used as well. Since glucose, proteins, and fats are used as fuel sources, less carbon dioxide is produced than oxygen is consumed; the RQ is, on average, about 0.7 for fat and about 0.8 for protein.

Oxygen and carbon dioxide move independently of each other; they diffuse down their own pressure gradients. As blood leaves the lungs through the pulmonary veins, the venous PO2=100mmHg, whereas the venous PCO2=40mmHg. As blood enters the systemic capillaries, the blood will lose oxygen and gain carbon dioxide because of the pressure difference between the tissues and blood. In systemic capillaries, PO2=100mmHg, but in the tissue cells, PO2=40mmHg. This pressure gradient drives the diffusion of oxygen out of the capillaries and into the tissue cells. At the same time, blood PCO2=40mmHg and systemic tissue PCO2=45mmHg. The pressure gradient drives CO2 out of tissue cells and into the capillaries. The blood returning to the lungs through the pulmonary arteries has a venous PO2=40mmHg and a PCO2=45mmHg. The blood enters the lung capillaries where the process of exchanging gases between the capillaries and alveoli begins again. 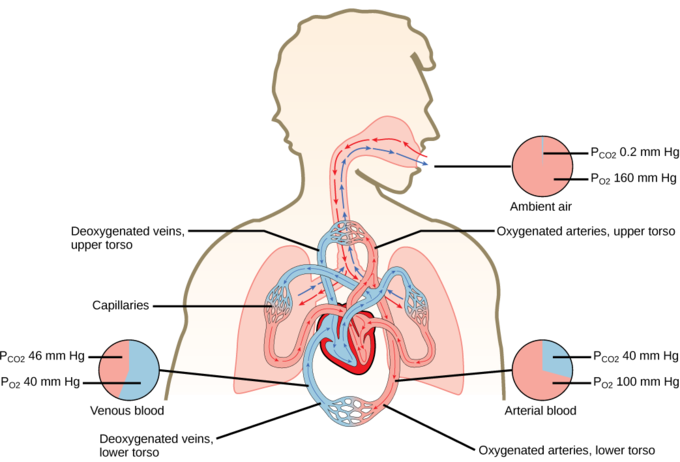