The kidneys regulate the body’s osmotic pressure in mammals.

Explain how the kidneys serve as the main osmoregulatory organs in mammalian systems, using the functional properties of nephrons

The kidneys are a pair of bean-shaped structures that are located just below and posterior to the liver in the peritoneal cavity. Adrenal glands, also called suprarenal glands, sit on top of each kidney. Kidneys regulate the osmotic pressure of a mammal’s blood through extensive filtration and purification in a process known as osmoregulation. All the blood in the human body is filtered many times a day by the kidneys. These organs use almost 25 percent of the oxygen absorbed through the lungs to perform this function. Oxygen allows the kidney cells to efficiently manufacture chemical energy in the form of ATP through aerobic respiration. Kidneys eliminate wastes from the body; urine is the filtrate that exits the kidneys. 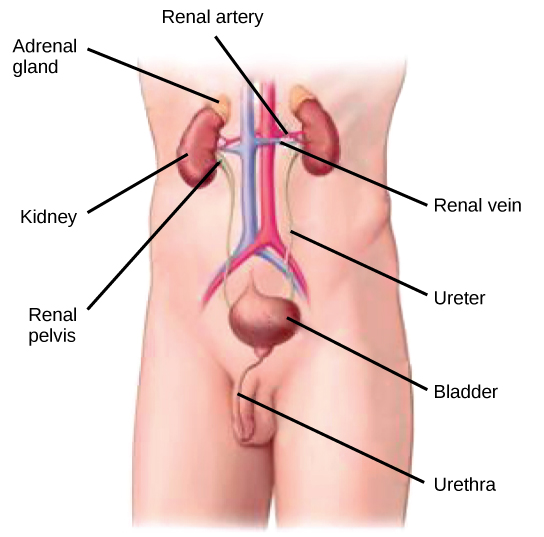 Kidneys’ location and function: Kidneys filter the blood, producing urine that is stored in the bladder prior to elimination through the urethra. They are located in the peritoneal cavity.

Externally, the kidneys are surrounded by three layers. The outermost layer, the renal fascia, is a tough connective tissue layer. The second layer, the perirenal fat capsule, helps anchor the kidneys in place. The third and innermost layer is the renal capsule. Internally, the kidney has three regions: an outer cortex, a medulla in the middle, and the renal pelvis in the region called the hilum of the kidney. The hilum is the concave part of the bean-shape where blood vessels and nerves enter and exit the kidney; it is also the point of exit for the ureters. 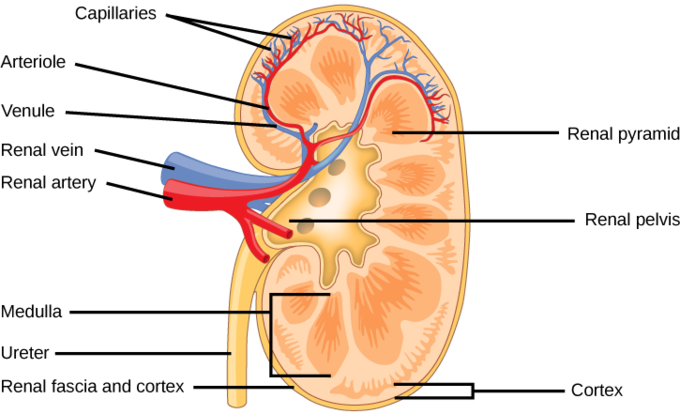 Because the kidney filters blood, its network of blood vessels is an important component of its structure and function. The arteries, veins, and nerves that supply the kidney enter and exit at the renal hilum. Renal blood supply starts with the branching of the aorta into the renal arteries (which are each named based on the region of the kidney they pass through) and ends with the exiting of the renal veins to join the inferior vena cava. The renal arteries split into several segmental arteries upon entering the kidneys. Each segmental artery splits further into several interlobar arteries that enter the renal columns, which supply the renal lobes. The interlobar arteries split at the junction of the renal cortex and medulla to form the arcuate arteries. The arcuate, “bow shaped” arteries form arcs along the base of the medullary pyramids. Cortical radiate arteries, as the name suggests, radiate out from the arcuate arteries, branch into numerous afferent arterioles, and then enter the capillaries supplying the nephrons.

Nephron: The Functional Unit of the Kidney

The functional unit of the kidney, the nephron, removes waste from the body.

The nephron, the functional unit of the kidney, is responsible for removing waste from the body. Each kidney is composed of over one million nephrons that dot the renal cortex, giving it a granular appearance when sectioned sagittally (from front to rear). Eighty-five percent of nephrons are cortical nephrons, deep in the renal cortex; the remaining 15 percent are juxtamedullary nephrons, which lie in the renal cortex close to the renal medulla.

Diagram of a nephron

A nephron consists of three parts: a renal corpuscle, a renal tubule, and the associated capillary network, which originates from the cortical radiate arteries. The renal corpuscle, located in the renal cortex, is composed of a network of capillaries known as the glomerulus, as well as a cup-shaped chamber that surrounds it: the glomerular or Bowman’s capsule.

The renal tubule is a long, convoluted structure that emerges from the glomerulus. It can be divided into three parts based on function. The first part is called the proximal convoluted tubule (PCT), due to its proximity to the glomerulus. The second part is called the loop of Henle, or nephritic loop, because it forms a loop (with descending and ascending limbs) that goes through the renal medulla. The third part of the renal tubule is called the distal convoluted tubule (DCT); this part is also restricted to the renal cortex. This last part of the nephron connects with and empties its filtrate into collecting ducts that line the medullary pyramids. The collecting ducts amass contents from multiple nephrons, fusing together as they enter the papillae of the renal medulla.

Urine is a byproduct of the osmoregulatory function of kidneys, which filter blood, reabsorb water and nutrients, and secrete wastes.

Outline the process by which kidneys filter blood, reabsorb nutrients and water, and produce urine

Kidneys filter blood in a three-step process. First, the nephrons filter blood that runs through the capillary network in the glomerulus. Almost all solutes, except for proteins, are filtered out into the glomerulus by a process called glomerular filtration. Second, the renal tubules collect the filtrate. Most of the solutes are reabsorbed in the PCT by a process called tubular reabsorption. In the loop of Henle, the filtrate continues to exchange solutes and water with the renal medulla and the peritubular capillary network. 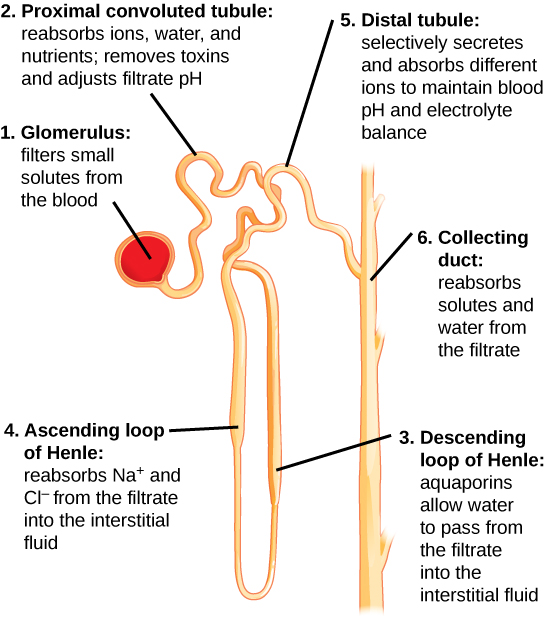 Nephron structure: Each part of the nephron performs a different function in filtering waste and maintaining homeostatic balance.

Finally, some substances, such as electrolytes and drugs, are removed from blood through the peritubular capillary network into the distal convoluted tubule or collecting duct. Urine is a collection of substances that have not been reabsorbed during glomerular filtration or tubular reabsorbtion.

Tubular reabsorption occurs in the PCT part of the renal tubule. Almost all nutrients are reabsorbed; this occurs either by passive or active transport. Reabsorption of water and key electrolytes are regulated and influenced by hormones. Sodium (Na+) is the most abundant ion; most of it is reabsorbed by active transport and then transported to the peritubular capillaries. Because Na+ is actively transported out of the tubule, water follows to even out the osmotic pressure. Water is also independently reabsorbed into the peritubular capillaries due to the presence of aquaporins, or water channels, in the PCT. This occurs due to the low blood pressure and high osmotic pressure in the peritubular capillaries. Every solute, however, has a transport maximum; the excess solute is not reabsorbed. Kidneys’ osmolarity of body fluids is maintained at 300 milliosmole (mOsm).

Loop of Henle: The loop of Henle acts as a countercurrent multiplier that uses energy to create concentration gradients. The descending limb is water permeable. Water flows from the filtrate to the interstitial fluid, so osmolality inside the limb increases as it descends into the renal medulla. At the bottom, the osmolality is higher inside the loop than in the interstitial fluid. Thus, as filtrate enters the ascending limb, Na+ and Cl- ions exit through ion channels present in the cell membrane. Further up, Na+ is actively transported out of the filtrate and Cl- follows. Osmolarity is given in units of milliosmoles per liter (mOsm/L).

Additional solutes and wastes are secreted into the kidney tubules during tubular secretion, which is the opposite process to tubular reabsorption. The collecting ducts collect filtrate coming from the nephrons and fuse in the medullary papillae. From here, the papillae deliver the filtrate, now called urine, into the minor calyces that eventually connect to the ureters through the renal pelvis.