The exponential growth of the human population could lead to food shortages, global warming, and other issues of resource scarcity.

Global human population growth is around 75 million annually, or 1.1% per year. The global population has grown from 1 billion in 1800 to 7 billion in 2012. It is expected to keep growing, though predictions differ as to when and if this growth will plateau. 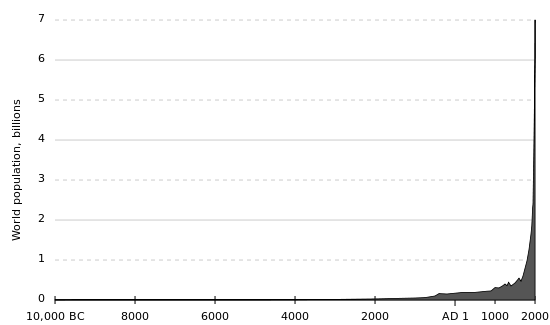 Globally, the growth rate of the human population has been declining since 1962 and 1963, when it was 2.20% per annum. In 2009, the estimated annual growth rate was 1.1%. The CIA World Factbook gives the world annual birthrate, mortality rate, and growth rate as 1.89%, 0.79%, and 1.096% respectively. The last 100 years have seen a rapid increase in population due to medical advances and massive increase in agricultural productivity.

Each region of the globe has seen reductions in growth rate in recent decades, though growth rates remain above 2% in some countries of the Middle East and Sub-Saharan Africa, and also in South Asia, Southeast Asia, and Latin America. This does not mean that the population is declining;
rather, it means the population is growing more slowly. However, some countries do experience negative population growth, mainly due to low fertility rates, high death rates and emigration.

According to the UN’s 2010 revision to its population projections, world population will peak at 10.1 billion in 2100 compared to 7 billion in 2011. However, some experts dispute the UN’s forecast and have argued that birthrates will fall below replacement rates (the number of births needed to maintain a stable population) in the 2020s. According to these forecasters, population growth will be only sustained until the 2040s by rising longevity, but will peak below 9 billion by 2050, followed by a long decline. 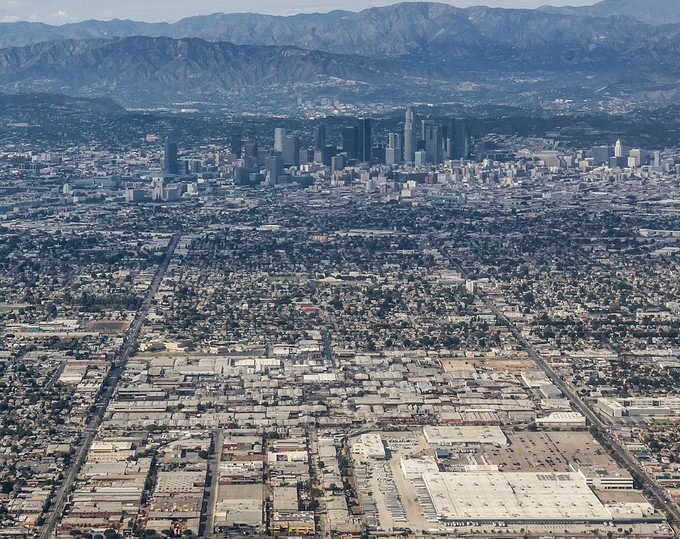 Growing Population Rate and Resource Scarcity: Greater Los Angeles lies on a coastal Mediterranean Savannah with a small watershed that is able to support at most one million people on its own water; as of 2015, the area has a population of over 18 million. Researchers predict that similar cases of resource scarcity will grow more common as the world population increases.

The “population explosion” seen in the last century has led to dire predictions. In 1968, biologist Paul Ehrlich wrote, “The battle to feed all of humanity is over. In the 1970s, hundreds of millions of people will starve to death in spite of any crash programs embarked upon now. At this late date, nothing can prevent a substantial increase in the world death rate. ” Although many critics view Ehrlich’s view as an exaggeration, the human population continues to grow exponentially. The laws of nature dictate that exponential growth cannot continue indefinitely.

Despite efforts to curb population growth, such as the “one-child policy” in China (introduced in 1979 but relaxed in the early 2000s), the human population continues to grow. A primary concern regarding this growth is that the demand for ever-more food will lead to widespread shortages, as forecast by Ehrlich.

In addition to the threat of food shortages, human population growth is damaging to the environment in potentially permanent ways. Most scientists agree that climate change caused by the emission of the greenhouse gas carbon dioxide (CO2) is a significant consequence of human activities. In a series of treaties in the late 20th century, many countries committed to reducing their CO2 emissions to prevent continuous global warming; however these treaties have not been ratified by every country, largely due to economic and political concerns. The role of human activity in climate change is hotly debated in some circles. The future holds considerable uncertainty for curbing human population growth and protecting the environment.

Humans have exceeded density-dependent limits on population by enacting various environmental changes to accommodate our needs for hygiene, shelter, and food.

Humans are uniquely able to consciously alter their environment to increase its carrying capacity. This capability is an underlying reason for human population growth as humans are able to overcome density-dependent limits on population growth, in contrast with all other organisms.

Human intelligence, society, and communication have enabled this capacity. For instance, people can construct shelters to protect them from the elements; food supply has increased because of agriculture and domestication of animals; and humans use language to pass on technology to new generations, allowing continual improvement upon previous accomplishments. Migration has also contributed to human population growth. Originating from Africa, humans have migrated to nearly every inhabitable area on the planet.

Public health, sanitation, and the use of antibiotics and vaccines have lessened the impact of infectious disease on human populations. In the fourteenth century, the bubonic plague killed as many as 100 million people: between 30 to 60 percent of Europe’s population. Today, however, the plague and other infectious diseases have much less of an impact. Through vaccination programs, better nutrition, and vector control (carriers of disease), international agencies have significantly reduced the global infectious disease burden. For example, reported cases of measles in the United States dropped from around 700,000 a year in the 1950s to practically zero by the late 1990s. Globally, measles fell 60 percent from an estimated 873,000 deaths in 1999 to 164,000 in 2008. This advance is attributed entirely to a comprehensive vaccination program. 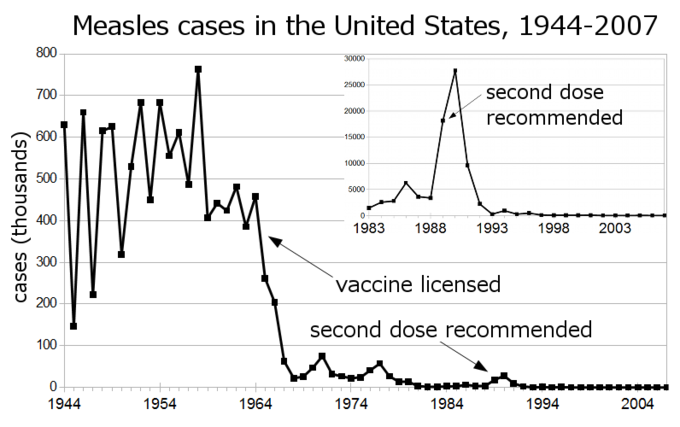 Developing countries have also made advances in curbing mortality from infectious disease. For example, deaths from infectious and parasitic diseases in Brazil fell from second place as the most important causes of death in 1977 to fifth place in 1984. The improvement is attributed in part to increased access to essential goods and services, reflecting the country’s rising prosperity. Through changes in economic status, as in Brazil, as well as global disease control efforts, human population growth today is less limited by infectious disease than has been the case historically. 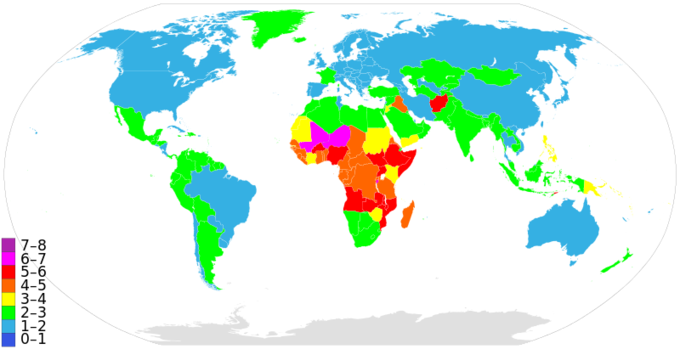 A population’s growth is strongly influenced by the proportions of individuals in different age brackets, which in turn is influenced by economic development.

The variation of populations over time, also known as population dynamics, depends on biological and environmental processes that determine population changes. A population’s growth rate is strongly influenced by the proportions of individuals of particular ages. With knowledge of this age structure, population growth can be more accurately predicted. Age structure data allow the rate of growth (or decline) to be associated with a population’s level of economic development.

For example, the population of a country with rapid growth has a triangle-shaped age structure with a greater proportion of younger individuals who are at or close to reproductive age. This pattern typically occurs where fewer people live to old age because of sub-optimal living standards, such as occurs in underdeveloped countries.

Population bar graphs for stages of demographic change from expansion to contraction: The leftmost diagram (representing the age structure of a rapidly-growing population) indicates that the number of individuals decreases rapidly with age. The slow-growth model shows that the proportion of individuals decreases steadily with age. The stable population diagram is rounded on top; the older part of the population is a larger proportion of the population than in the other age diagrams. The rightmost diagram represents a population that may be stable or even declining. The relatively few young people may not be making up for the mortality among the older age groups.

Some developed countries, including the United States, have a slowly-growing population. This results in a column-shaped age structure diagram with steeper sides. In these cases, the population has fewer young and reproductive-aged individuals, with a greater proportion of older individuals. Some developed countries, such as Italy, have zero population growth. Countries with declining populations, such as Japan, have a bulge in the middle of their age structure diagram. The bulge indicates relatively-few young individuals, and a higher proportion of middle-aged and older individuals.

Globally, less-economically developed countries in Africa and Asia have the highest growth rates, leading to populations consisting mostly of younger people. Improved health care, beginning in the 1960s, is one of the leading causes of the increased growth rates that created the population explosion. For example, in the Middle East and North Africa, around 65 percent of the population is under the age of 30. These high growth rates lead to the so-called “youth bulge,” which some experts believe is a cause of social unrest and economic problems such as high unemployment.

All of the factors above also have an impact on the average life expectancy. As economic development and quality of health care increase, the life expectancy also increases.