Simple learned behaviors include habituation and imprinting, both of which are important to the maturation process of young animals.

Distinguish between the simple learned behaviors of habituation and imprinting

The majority of the behaviors discussed in previous sections are innate or at least have an innate component. In other words, variations on the innate behaviors may be learned. Innate behaviors are inherited and do not change in response to signals from the environment. Conversely, learned behaviors, even though they may have instinctive components, allow an organism to adapt to changes in the environment and are modified by previous experiences. Simple learned behaviors include habituation and imprinting, both of which are important to the maturation process of young animals.

Habituation is a simple form of learning in which an animal stops responding to a stimulus after a period of repeated exposure. This is a form of non-associative learning as the stimulus is not associated with any punishment or reward. Prairie dogs typically sound an alarm call when threatened by a predator, but they become habituated to the sound of human footsteps when no harm is associated with this sound; therefore, they no longer respond to them with an alarm call. In this example, habituation is specific to the sound of human footsteps, as the animals still respond to the sounds of potential predators.

Imprinting is a type of learning that occurs at a particular age or a life stage that is rapid and independent of the species involved. Hatchling ducks recognize the first adult they see, their mother, and make a bond with her. A familiar sight is ducklings walking or swimming after their mothers. This type of non-associative learning is very important in the maturation process of these animals as it encourages them to stay near their mother in order to be be protected, greatly increasing their chances of survival. However, if newborn ducks see a human before they see their mother, they will imprint on the human and follow it in just the same manner as they would follow their real mother. 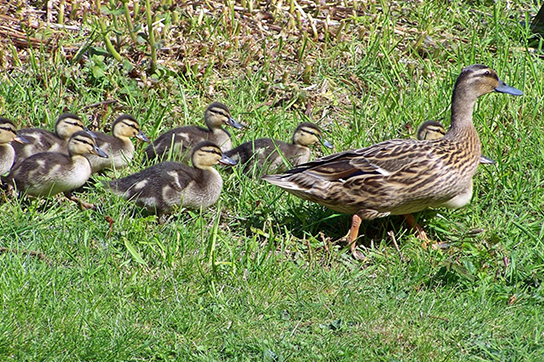 Imprinting: The attachment of ducklings to their mother is an example of imprinting.

In classical conditioning, a behavior is paired with an unrelated stimulus; in operant conditioning, behaviors are modified by consequences.

Conditioned behaviors are types of associative learning where a stimulus becomes associated with a consequence. Two types of conditioning techniques include classical and operant conditioning.

Classical conditioning: In the classic Pavlovian response, the dog becomes conditioned to associate the ringing of the bell with food.

Some believe that this type of conditioning requires multiple exposures to the paired stimulus and response, but it is now known that this is not necessary in all cases; some conditioning can be learned in a single pairing experiment. Classical conditioning is a major tenet of behaviorism, a branch of psychological philosophy that proposes that all actions, thoughts, and emotions of living things are behaviors that can be treated by behavior modification and changes in the environment.

In operant conditioning, the conditioned behavior is gradually modified by its consequences as the animal responds to the stimulus. A major proponent of such conditioning was psychologist B.F. Skinner, the inventor of the Skinner box. Skinner put rats in his boxes that contained a lever that would dispense food to the rat when depressed. While initially the rat would push the lever a few times by accident, it eventually associated pushing the lever with getting the food. This type of learning is an example of operant conditioning. Operant learning is the basis of most animal training: the conditioned behavior is continually modified by positive or negative reinforcement (such as being given a reward or having a negative stimulus removed) or by positive or negative punishment (such as being given a punishment or having a pleasing stimulus removed). In this way, the animal is conditioned to associate a type of behavior with the punishment or reward. Over time, the animal can be induced to perform behaviors that they would not have done in the wild, such as the “tricks” dolphins perform at marine amusement park shows. 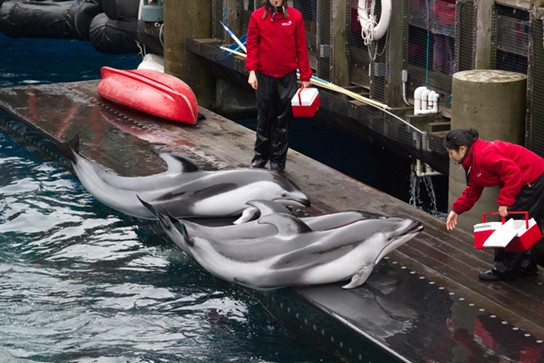 Cognitive learning relies on cognitive processes such as reasoning and abstract thinking; it is much more efficient than conditioning.

Classical and operant conditioning are inefficient ways for humans and other intelligent animals to learn. Some primates, including humans, are able to learn by imitating the behavior of others and by taking instructions. The development of complex language by humans has made cognitive learning, or the manipulation of information using the mind, the most prominent method of human learning. In fact, that is how you are learning right now by reading this information. As students read, they can make mental images of objects or organisms, imagining changes to them or behaviors by them as they anticipate the consequences. In addition to visual processing, cognitive learning is also enhanced by remembering past experiences, touching physical objects, hearing sounds, tasting food, and a variety of other sensory-based inputs. Cognitive learning is so powerful that it can be used to understand conditioning (discussed in the previous concept) in detail. In the reverse scenario, conditioning cannot help someone learn about cognition.

Classic work on cognitive learning was done by Wolfgang Köhler with chimpanzees. He demonstrated that these animals were capable of abstract thought by showing that they could learn how to solve a puzzle. When a banana was hung in their cage too high for them to reach along with several boxes placed randomly on the floor, some of the chimps were able to stack the boxes one on top of the other, climb on top of them, and get the banana. This implies that they could visualize the result of stacking the boxes even before they had performed the action. This type of learning is much more powerful and versatile than conditioning.

Cognitive learning is not limited to primates, although they are the most efficient in using it. Maze-running experiments done with rats in the 1920s were the first to show cognitive skills in a simple mammal. The motivation for the animals to work their way through the maze was the presence of a piece of food at its end. In these studies, the animals in Group I were run in one trial per day and had food available to them each day on completion of the run. Group II rats were not fed in the maze for the first six days and then subsequent runs were done with food for several days after. Group III rats had food available on the third day and every day thereafter. The results were that the control rats, Group I, learned quickly, figuring out how to run the maze in seven days. Group III did not learn much during the three days without food, but rapidly caught up to the control group when given the food reward. Group II learned very slowly for the six days with no reward to motivate them. They did not begin to catch up to the control group until the day food was given; it then took two days longer to learn the maze. 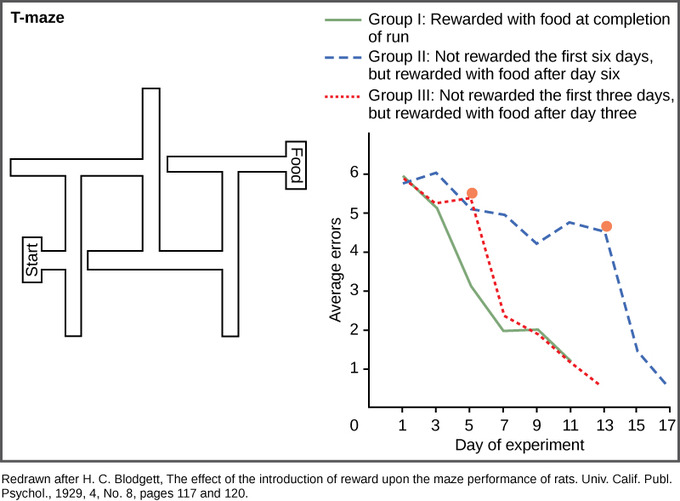 Cognitive learning: Group I (the green solid line) found food at the end of each trial; group II (the blue dashed line) did not find food for the first 6 days; and group III (the red dotted line) did not find food during runs on the first three days. Notice that rats given food earlier learned faster and eventually caught up to the control group. The orange dots on the group II and III lines show the days when food rewards were added to the mazes.

It may not be immediately obvious that this type of learning is different from conditioning. Although one might be tempted to believe that the rats simply learned how to find their way through a conditioned series of right and left turns, E.C. Tolman proved a decade later that the rats were making a representation of the maze in their minds, which he called a “cognitive map.” This was an early demonstration of the power of cognitive learning and how these abilities were not limited just to humans.

Sociobiology is an interdisciplinary science originally popularized by social insect researcher E.O. Wilson in the 1970s. Wilson defined the science as “the extension of population biology and evolutionary theory to social organization.” The main thrust of sociobiology is that animal and human behavior, including aggressiveness and other social interactions, can be explained almost solely in terms of genetics and natural selection. This science is controversial; some have criticized the approach for ignoring the environmental effects on behavior. This is another example of the “nature versus nurture” debate of the role of genetics versus the role of environment in determining an organism’s characteristics.

Sociobiology also links genes with behaviors and has been associated with “biological determinism,” the belief that all behaviors are hardwired into our genes. No one disputes that certain behaviors can be inherited and that natural selection plays a role retaining them. It is the application of such principles to human behavior that sparks this controversy, which remains active today.