Describe the process and purpose of osmoregulation

Doctors typically recommend drinking eight to ten glasses of water a day. This amount is necessary for the proper balance of electrolytes in the human body. The intake is balanced by more or less equal excretion of fluids by urination, defecation, sweating, and, to a lesser extent, respiration. The body’s organs and tissues are immersed in fluid at a constant temperature, pH, and solute concentration, each of which contributes to maintaining the body’s homeostasis. The solutes in body fluids are mainly mineral salts and sugars. Osmotic regulation, or osmoregulation, keeps these solutes at the ideal concentrations. Osmotic homeostasis is maintained despite the influence of external factors such as temperature, diet, and weather conditions.

Osmosis is the diffusion of water across a membrane in response to osmotic pressure caused by an imbalance of molecules on either side of the membrane. Osmoregulation is the process of maintenance of salt and water balance (osmotic balance) across membranes within the body’s fluids, which are composed of water plus electrolytes and non-electrolytes. An electrolyte is a solute that dissociates into ions when dissolved in water. A non-electrolyte, in contrast, does not dissociate into ions during water dissolution. Both electrolytes and non-electrolytes contribute to the osmotic balance. The body’s fluids include blood plasma, the cytosol within cells, and interstitial fluid, the fluid that exists in the spaces between cells and tissues of the body. The membranes of the body (such as the pleural, serous, and cell membranes) are semi-permeable: they allow passage of certain types of solutes and water, but not others. Solutions on two sides of a semi-permeable membrane tend to equalize in solute concentration by movement of solutes and/or water across the membrane.

A cell immersed in plain water tends to swell as water diffuses in from the hypotonic or “low salt” solution. In contrast, a cell shrivels when placed in a solution of high salt concentration. The cell loses water, which moves outside to the hypertonic or “high salt” environment. Isotonic cells have an equal concentration of solutes inside and outside the cell; this equalizes the osmotic pressure on either side of the semi-permeable membrane. 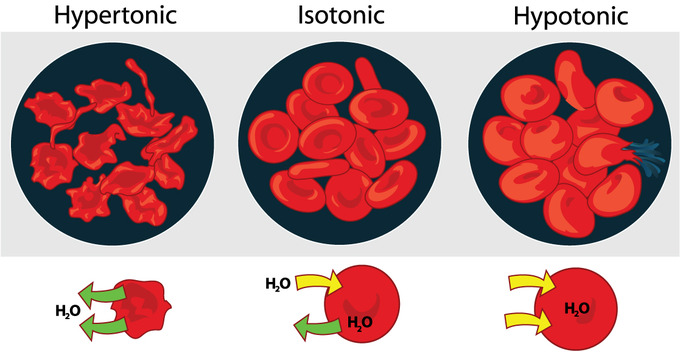 Osmoconformers are marine animals which, in contrast to osmoregulators, maintain the osmolarity of their body fluids such that it is always equal to the surrounding seawater. Osmoconformers decrease the net flux of water into or out of their bodies from diffusion. They maintain internal solute concentrations within their bodies at a level equal to the osmolarity of the surrounding medium.

The body is subject to a continual intake and loss of water and electrolytes. Excess electrolytes and wastes that result from osmoregulation are transported to the kidneys and excreted. The process of excretion helps the body maintain osmotic balance.

Complex multicellular animals exchange water and nutrients with the environment by consuming food and water, and by excreting sweat, urine, and feces. When disease or injury damage the mechanisms that regulate osmotic pressure, toxic waste or water may accumulate, with potentially dire consequences.

Ions cannot diffuse passively through membranes; instead, their concentrations are regulated by facilitated diffusion and active transport.

A teaspoon of table salt readily dissolves in water. The solubility of sodium chloride results from its capacity to ionize in water. Salt and other compounds that dissociate into their component ions are called electrolytes. In water, sodium chloride (NaCl) dissociates into the sodium ion (Na+) and the chloride ion (Cl–). The most important ions, whose concentrations are very closely regulated in body fluids, are the cations sodium (Na+), potassium (K+), calcium (Ca+2),and magnesium (Mg+2); and the anions chloride (Cl-), carbonate (CO3-2), bicarbonate (HCO3-), and phosphate(PO3-). Electrolytes are lost from the body during urination and perspiration. For this reason, athletes are encouraged to replace electrolytes and fluids during periods of increased activity and perspiration.

Osmotic pressure is influenced by the concentration of solutes in a solution. It is directly proportional to the number of solute atoms or molecules and not dependent on the size of the solute molecules. Because electrolytes dissociate into ions, adding relatively more solute molecules to a solution, they exert a greater osmotic pressure per unit mass than non-electrolytes such as glucose.

Water passes through semi-permeable membranes by passive diffusion, moving along a concentration gradient and equalizing the concentration on either side of the membrane. Electrolyte ions may not be able to passively diffuse across a membrane, but may instead require special mechanisms to cross the semi-permeable membrane. The mechanisms that transport ions across membranes are facilitated diffusion and active transport. Facilitated diffusion of solutes occurs through protein-based channels. Active transport requires energy in the form of ATP conversion, carrier proteins, or pumps in order to move ions against the concentration gradient.

Transport across cell membranes: Paul Andersen describes how cells move materials across the cell membrane. All movement can be classified as passive or active. Passive transport, such as diffusion, requires no energy as particles move along their gradient. Active transport requires additional energy as particles move against their gradient. Specific examples, such as GLUT and the Na/K, pump are included.

Concept of Osmolality and Milliequivalent

Concept of osmolality and milliequivalent

In order to calculate osmotic pressure, it is necessary to understand how solute concentrations are measured. The unit for measuring solutes is the mole. One mole is defined as the molecular weight of the solute in grams. For example, the molecular weight of sodium chloride is 58.44; thus, one mole of sodium chloride weighs 58.44 grams. A solution’s molarity is the number of moles of solute per liter of solution. On the other hand, a solution’s molality is the number of moles of solute per kilogram of solvent. If the solvent is water, one kilogram of water is equal to one liter of water. Osmolarity is related to osmolality, but is affected by changes in water content, as well as temperature and pressure. In contrast, osmolality is unaffected by temperature and pressure.

Aquatic organisms with various salt tolerances adapt to their environments through osmoregulation and osmoconformation.

Persons lost at sea without any fresh water to drink are at risk of severe dehydration because the human body cannot adapt to drinking seawater, which is hypertonic (having higher osmotic pressure) in comparison to body fluids. Stenohaline organisms, such as goldfish, can tolerate only a relatively-narrow range of salinity. About 90 percent of bony fish species can live in either freshwater or seawater, but not both. These fish are incapable of osmotic regulation in the alternate habitat.

However, a few species, known as euryhaline organisms, spend part of their lifecycle in fresh water and part in seawater. These organisms, such as the salmon, are tolerant of a relatively-wide range of salinity. They evolved osmoregulatory mechanisms to survive in a variety of aquatic environments. In relatively hypotonic (low osmotic pressure) fresh water, their skin absorbs water (see [a] in ). The fish do not drink much water and balance electrolytes by passing dilute urine while actively taking up salts through the gills. When they move to a hypertonic marine environment, the salmon lose water, excreting the excess salts through their gills and urine (see [b] in ). 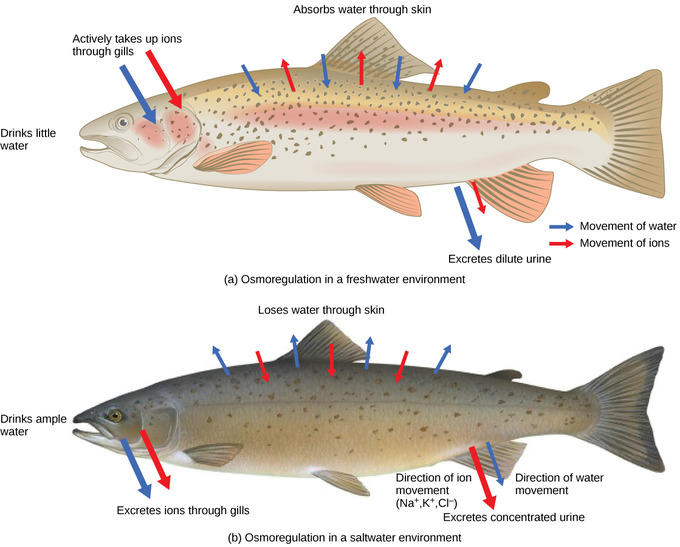 Salmon physiology responds to freshwater and seawater to maintain osmotic balance: Fish are osmoregulators, but must use different mechanisms to survive in (a) freshwater or (b) saltwater environments.

Most marine invertebrates, on the other hand, may be isotonic with sea water (osmoconformers). Their body fluid concentrations conform to changes in seawater concentration. The blood composition of cartilaginous fishes, such as sharks and rays, is similar to that of bony fishes. However, the blood of sharks contains urea and trimethylamine oxide (TMAO). The shark’s blood electrolyte composition is not similar to that of seawater, but maintains isotonicity with seawater by storing urea at high concentrations. Sharks are “ureotelic” animals that secrete urea to maintain osmotic balance. TMAO stabilizes proteins in the presence of high urea levels, preventing the disruption of peptide bonds that would otherwise occur at such high levels of urea.