Cnidarians are diploblastic, have organized tissue, undergo extracellular digestion, and use cnidocytes for protection and to capture prey.

Describe the fundamental anatomy of a Cnidarian

Phylum Cnidaria includes animals that show radial or biradial symmetry and are diploblastic: they develop from two embryonic layers. Nearly all (about 99 percent) cnidarians are marine species.

Cnidarians contain specialized cells known as cnidocytes (“stinging cells”), which contain organelles called nematocysts (stingers). These cells are present around the mouth and tentacles, serving to immobilize prey with toxins contained within the cells. Nematocysts contain coiled threads that may bear barbs. The outer wall of the cell has hairlike projections called cnidocils, which are sensitive to touch. When touched, the cells are known to fire coiled threads that can either penetrate the flesh of the prey or predators of cnidarians, or ensnare it. These coiled threads release toxins into the target that can often immobilize prey or scare away predators (). 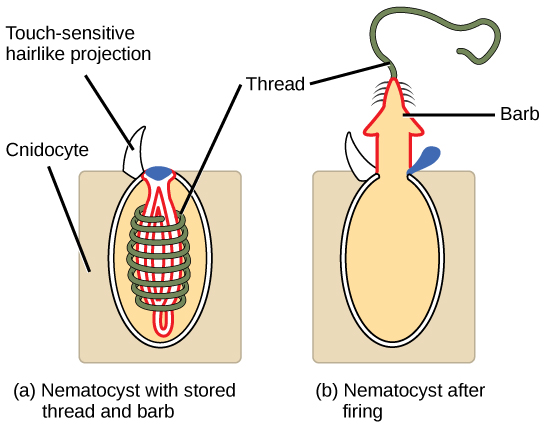 Cnidocytes: Animals from the phylum Cnidaria have stinging cells called cnidocytes. Cnidocytes contain large organelles called (a) nematocysts that store a coiled thread and barb. When hairlike projections on the cell surface are touched, (b) the thread, barb, and a toxin are fired from the organelle.

Animals in this phylum display two distinct morphological body plans: polyp or “stalk” and medusa or “bell”. An example of the polyp form is Hydra spp.; perhaps the most well-known medusoid animals are the jellies (jellyfish). Polyp forms are sessile as adults, with a single opening to the digestive system (the mouth) facing up with tentacles surrounding it. Medusa forms are motile, with the mouth and tentacles hanging down from an umbrella-shaped bell. 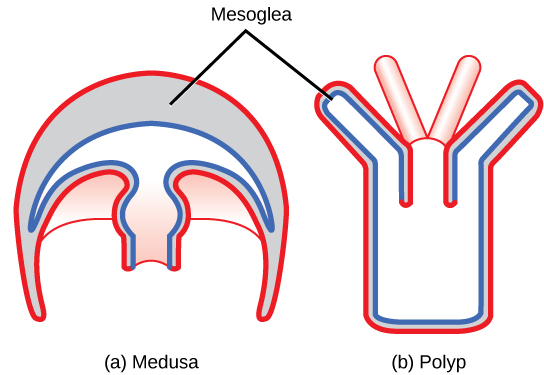 Some cnidarians are polymorphic, having two body plans during their life cycle. An example is the colonial hydroid called an Obelia. The sessile polyp form has, in fact, two types of polyps. The first is the gastrozooid, which is adapted for capturing prey and feeding; the other type of polyp is the gonozooid, adapted for the asexual budding of medusa. When the reproductive buds mature, they break off and become free-swimming medusa, which are either male or female (dioecious). The male medusa makes sperm, whereas the female medusa makes eggs. After fertilization, the zygote develops into a blastula and then into a planula larva. The larva is free swimming for a while, but eventually attaches and a new colonial reproductive polyp is formed. 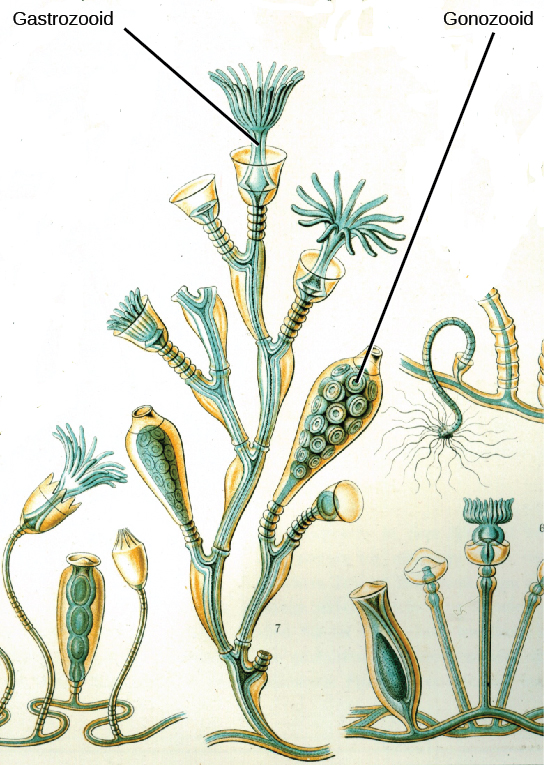 All cnidarians show the presence of two membrane layers in the body that are derived from the endoderm and ectoderm of the embryo. The outer layer (from ectoderm) is called the epidermis and lines the outside of the animal, whereas the inner layer (from endoderm) is called the gastrodermis and lines the digestive cavity. Between these two membrane layers is a non-living, jelly-like mesoglea connective layer. In terms of cellular complexity, cnidarians show the presence of differentiated cell types in each tissue layer: nerve cells, contractile epithelial cells, enzyme-secreting cells, and nutrient-absorbing cells, as well as the presence of intercellular connections. However, the development of organs or organ systems is not advanced in this phylum.

The nervous system is primitive, with nerve cells scattered across the body. This nerve net may show the presence of groups of cells in the form of nerve plexi (singular: plexus) or nerve cords. The nerve cells show mixed characteristics of motor as well as sensory neurons. The predominant signaling molecules in these primitive nervous systems are chemical peptides, which perform both excitatory and inhibitory functions. Despite the simplicity of the nervous system, it coordinates the movement of tentacles, the drawing of captured prey to the mouth, the digestion of food, and the expulsion of waste.

The phylum Cnidaria contains about 10,000 described species divided into four classes: Anthozoa, Scyphozoa, Cubozoa, and Hydrozoa. The anthozoans, the sea anemones and corals, are all sessile species, whereas the scyphozoans (jellyfish) and cubozoans (box jellies) are swimming forms. The hydrozoans contain sessile forms and swimming colonial forms like the Portuguese Man O’ War.

Members of the class Anthozoa display only polyp morphology and have cnidocyte-covered tentacles around their mouth opening.

Identify the adaptive features of anthozoa

The class Anthozoa includes all cnidarians that exhibit a polyp body plan only; in other words, there is no medusa stage within their life cycle. Examples include sea anemones, sea pens, and corals, with an estimated number of 6,100 described species. Sea anemones are usually brightly colored and can attain a size of 1.8 to 10 cm in diameter. These animals are usually cylindrical in shape and are attached to a substrate. 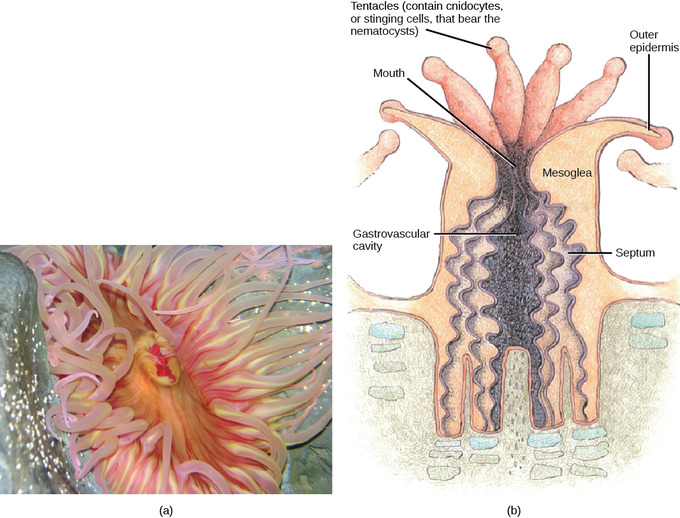 Anthozoans: The sea anemone (a), like all anthozoans, has only a polyp body plan (b).

The mouth of a sea anemone is surrounded by tentacles that bear cnidocytes. They have slit-like mouth openings and a pharynx, which is the muscular part of the digestive system that serves to ingest as well as egest food. It may extend for up to two-thirds the length of the body before opening into the gastrovascular cavity. This cavity is divided into several chambers by longitudinal septa called mesenteries. Each mesentery consists of one ectodermal and one endodermal cell layer with the mesoglea sandwiched in between. Mesenteries do not divide the gastrovascular cavity completely; the smaller cavities coalesce at the pharyngeal opening. The adaptive benefit of the mesenteries appears to be an increase in surface area for absorption of nutrients and gas exchange.

Sea anemones feed on small fish and shrimp, usually by immobilizing their prey using the cnidocytes. Some sea anemones establish a mutualistic relationship with hermit crabs by attaching to the crab’s shell. In this relationship, the anemone gets food particles from prey caught by the crab, while the crab is protected from the predators by the stinging cells of the anemone. Anemone fish, or clownfish, are able to live in the anemone since they are immune to the toxins contained within the nematocysts. Another type of anthozoan that forms an important mutualistic relationship is reef building coral. These hermatypic corals rely on a symbiotic relationship with zooxanthellae. The coral gains photosynthetic capability, while the zooxanthellae benefit by using nitrogenous waste and carbon dioxide produced by the cnidarian host.

Anthozoans remain polypoid throughout their lives. They can reproduce asexually by budding or fragmentation, or sexually by producing gametes. Both gametes are produced by the polyp, which can fuse to give rise to a free-swimming planula larva. The larva settles on a suitable substratum and develops into a sessile polyp.

Scyphozoans are free-swimming, polymorphic, dioecious, and carnivorous cnidarians with a prominent medusa morphology.

Explain the key features of scyphozoa

Class Scyphozoa, an exclusively marine class of animals with about 200 known species, includes all the jellies. The defining characteristic of this class is that the medusa is the prominent stage in the life cycle, although there is a polyp stage present. Members of this species range from 2 to 40 cm in length, but the largest scyphozoan species, Cyanea capillata, can reach a size of 2 m across. Scyphozoans display a characteristic bell-like morphology.

Scyphozoans: For jellyfish (a), and all other scyphozoans, the medusa (b) is the most prominent of the two life stages.

In the jellyfish, a mouth opening, surrounded by tentacles bearing nematocysts, is present on the underside of the animal. Scyphozoans live most of their life cycle as free-swimming, solitary carnivores. The mouth leads to the gastrovascular cavity, which may be sectioned into four interconnected sacs, called diverticuli. In some species, the digestive system may be further branched into radial canals. Like the septa in anthozoans, the branched gastrovascular cells serves to increase the surface area for nutrient absorption and diffusion; thus, more cells are in direct contact with the nutrients in the gastrovascular cavity.

In scyphozoans, nerve cells are scattered over the entire body. Neurons may even be present in clusters called rhopalia. These animals possess a ring of muscles lining the dome of the body, which provides the contractile force required to swim through water. Scyphozoans are dioecious animals, having separate sexes. The gonads are formed from the gastrodermis with gametes expelled through the mouth. Planula larvae are formed by external fertilization; they settle on a substratum in a polypoid form known as scyphistoma. These forms may produce additional polyps by budding or may transform into the medusoid form. The life cycle of these animals can be described as polymorphic because they exhibit both a medusal and polypoid body plan at some point. 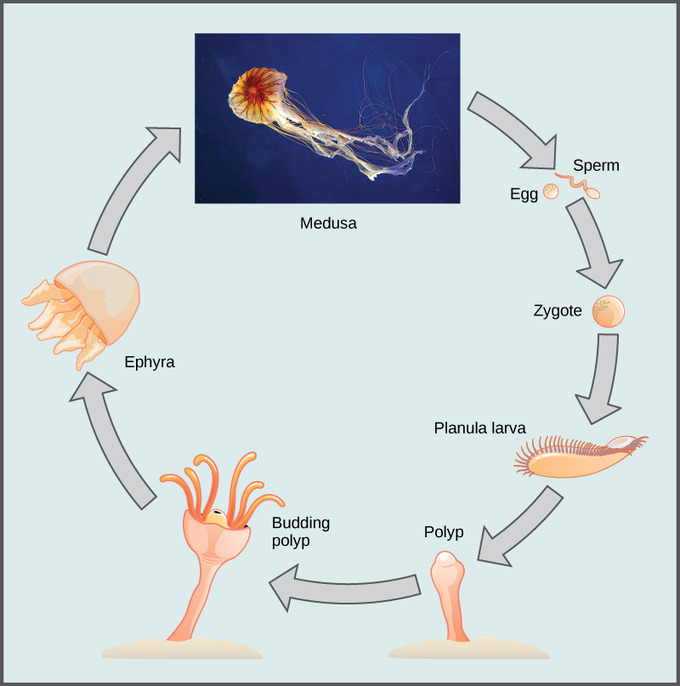 Cubozoans live as box-shaped medusae while Hydrozoans are true polymorphs and can be found as colonial or solitary organisms.

Distinguish between cubozoa and hydrozoa cnidarians

Class Cubozoa includes jellies that have a box-shaped medusa: a bell that is square in cross-section; hence, they are colloquially known as “box jellyfish.” These species may achieve sizes of 15–25 cm. Cubozoans display overall morphological and anatomical characteristics that are similar to those of the scyphozoans. A prominent difference between the two classes is the arrangement of tentacles. This is the most venomous group of all the cnidarians.

Cubozoans: The (a) tiny cubazoan jelly Malo kingi is thimble shaped and, like all cubozoan jellies, (b) has four muscular pedalia to which the tentacles attach. M. kingi is one of two species of jellies known to cause Irukandji syndrome, a condition characterized by excruciating muscle pain, vomiting, increased heart rate, and psychological symptoms. Two people in Australia, where Irukandji jellies are most-commonly found, are believed to have died from Irukandji stings. (c) A sign on a beach in northern Australia warns swimmers of the danger.

The cubozoans contain muscular pads called pedalia at the corners of the square bell canopy, with one or more tentacles attached to each pedalium. These animals are further classified into orders based on the presence of single or multiple tentacles per pedalium. In some cases, the digestive system may extend into the pedalia. Nematocysts may be arranged in a spiral configuration along the tentacles; this arrangement helps to effectively subdue and capture prey. Cubozoans exist in a polypoid form that develops from a planula larva. These polyps show limited mobility along the substratum. As with scyphozoans, they may bud to form more polyps to colonize a habitat. Polyp forms then transform into the medusoid forms.

Hydrozoa includes nearly 3,200 species; most are marine, although some freshwater species are known. Animals in this class are polymorphs: most exhibit both polypoid and medusoid forms in their lifecycle, although this is variable. 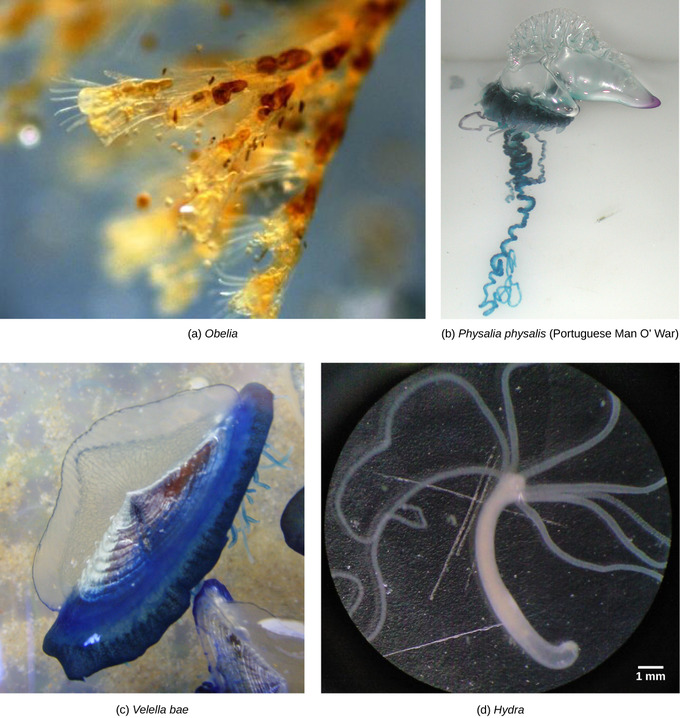 Hydrozoans: (a) Obelia, (b) Physalia physalis, known as the Portuguese Man O‘ War, (c) Velella bae, and (d) Hydra have different body shapes, but all belong to the family Hydrozoa.

The polyp form in these animals often shows a cylindrical morphology with a central gastrovascular cavity lined by the gastrodermis. The gastrodermis and epidermis have a simple layer of mesoglea sandwiched between them. A mouth opening, surrounded by tentacles, is present at the oral end of the animal. Many hydrozoans form colonies that are composed of a branched colony of specialized polyps that share a gastrovascular cavity, such as in the colonial hydroid Obelia. Colonies may also be free-floating and contain medusoid and polypoid individuals in the colony as in Physalia (the Portuguese Man O’ War) or Velella (By-the-wind sailor). Other species are solitary polyps (Hydra) or solitary medusae (Gonionemus). The true characteristic shared by all these diverse species is that their gonads for sexual reproduction are derived from epidermal tissue, whereas in all other cnidarians they are derived from gastrodermal tissue.