Vaccinations prevent viruses from spreading by building immunity to the virus.

Explain how vaccination protects vaccinated individuals and the community

While we do have limited numbers of effective antiviral drugs, such as those used to treat HIV and influenza, the primary method of controlling viral disease is by vaccination, which is intended to prevent outbreaks by building immunity to a virus or virus family. Vaccines may be prepared using live viruses, killed viruses, or molecular subunits of the virus. The killed viral vaccines and subunit viruses are both incapable of causing disease. 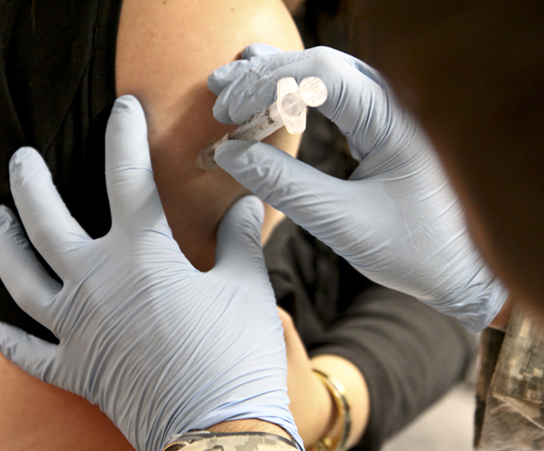 Vaccinations: Vaccinations are designed to boost immunity to a virus to prevent infection.

Live viral vaccines are designed in the laboratory to cause few symptoms in recipients while giving them protective immunity against future infections. Polio was one disease that represented a milestone in the use of vaccines. Mass immunization campaigns in the 1950s and 1960s significantly reduced the incidence of the disease, which caused muscle paralysis in children and generated great fear in the general population when regional epidemics occurred. The success of the polio vaccine paved the way for the routine dispensation of childhood vaccines against measles, mumps, rubella, chickenpox, and other diseases.

The danger of using live vaccines, which are usually more effective than killed vaccines, is low, but significant since the possibility that these viruses will revert to their disease-causing form by back mutations is still present. Live vaccines are usually made by attenuating (weakening) the “wild-type” (disease-causing) virus by growing it in the laboratory in tissues or at temperatures different from what the virus is accustomed to in the host. Adaptations to these new cells or temperatures induce mutations in the genomes of the virus, allowing it to grow better in the laboratory while inhibiting its ability to cause disease when reintroduced into conditions found in the host. These attenuated viruses still cause infection, but since they do not grow very well, they allow the immune response to develop in time to prevent major disease. Back mutations occur when the vaccine undergoes mutations in the host such that it readapts to the host and can again cause disease, which can then be spread to other humans in an epidemic. This type of scenario happened as recently as 2007 in Nigeria where mutations in a polio vaccine led to an epidemic of polio in that country.

Vaccines and anti-viral drugs can be used to inhibit the virus and reduce symptoms in individuals suffering from viral infections.

Give examples of treatments with anti-viral drugs

Vaccines and Anti-viral Drugs for Treatment

In some cases, vaccines can be used to treat an active viral infection. The concept behind this is that by giving the vaccine, immunity is boosted without adding more disease-causing virus. In the case of rabies, a fatal neurological disease transmitted via the saliva of rabies virus-infected animals, the progression of the disease from the time of the animal bite to the time it enters the central nervous system may be two weeks or longer. This is enough time to vaccinate an individual who suspects that they have been bitten by a rabid animaL; their boosted immune response is sufficient to prevent the virus from entering nervous tissue. Thus, the potentially-fatal neurological consequences of the disease are averted; the individual only has to recover from the infected bite. This approach is also being used for the treatment of Ebola virus, one of the fastest and most deadly viruses on earth. Transmitted by bats and great apes, this disease can cause death in 70–90 percent of infected humans within two weeks. Using newly-developed vaccines that boost the immune response in this way, there is hope that affected individuals will be better able to control the virus, potentially saving a greater percentage of infected persons from a rapid and very painful death.

Antivirals have been developed to treat genital herpes (herpes simplex II) and influenza. For genital herpes, drugs such as acyclovir can reduce the number and duration of episodes of active viral disease during which patients develop viral lesions in their skin cells. As the virus remains latent in nervous tissue of the body for life, this drug is not curative, but can make the symptoms of the disease more manageable. For influenza, drugs like Tamiflu (oseltamivir) can reduce the duration of “flu” symptoms by one or two days, but the drug does not prevent symptoms entirely. Tamiflu works by inhibiting an enzyme (viral neuraminidase) that allows new virions to leave their infected cells. Thus, Tamiflu inhibits the spread of virus from infected to uninfected cells. Other antiviral drugs, such as Ribavirin, have been used to treat a variety of viral infections, although its mechanism of action against certain viruses remains unclear. 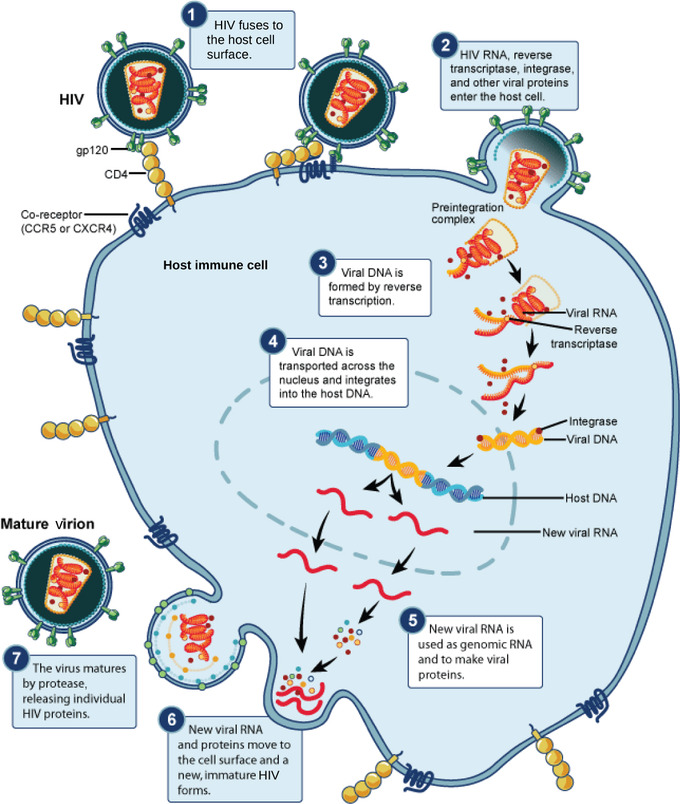 HIV: HIV, an enveloped, icosahedral virus, attaches to the CD4 receptor of an immune cell and fuses with the cell membrane. Viral contents are released into the cell where viral enzymes convert the single-stranded RNA genome into DNA and incorporate it into the host genome.

When any of these drugs are used individually, the high mutation rate of the virus allows it to easily and rapidly develop resistance to the drug, limiting the drug’s effectiveness. The breakthrough in the treatment of HIV was the development of HAART, highly-active anti-retroviral therapy, which involves a mixture of different drugs, sometimes called a drug “cocktail.” By attacking the virus at different stages of its replicative cycle, it is much more difficult for the virus to develop resistance to multiple drugs at the same time. Still, even with the use of combination HAART therapy, there is concern that, over time, the virus will develop resistance to this therapy. Thus, new anti-HIV drugs are constantly being developed with the hope of continuing the battle against this highly fatal virus.