Eukaryotic pre-mRNA receives a 5′ cap and a 3′ poly (A) tail before introns are removed and the mRNA is considered ready for translation.

Outline the steps of pre-mRNA processing

Pre-mRNAs are first coated in RNA-stabilizing proteins; these protect the pre-mRNA from degradation while it is processed and exported out of the nucleus. The three most important steps of pre-mRNA processing are the addition of stabilizing and signaling factors at the 5′ and 3′ ends of the molecule, and the removal of intervening sequences that do not specify the appropriate amino acids. In rare cases, the mRNA transcript can be “edited” after it is transcribed.

While the pre-mRNA is still being synthesized, a 7-methylguanosine cap is added to the 5′ end of the growing transcript by a 5′-to-5′ phosphate linkage. This moiety protects the nascent mRNA from degradation. In addition, initiation factors involved in protein synthesis recognize the cap to help initiate translation by ribosomes. 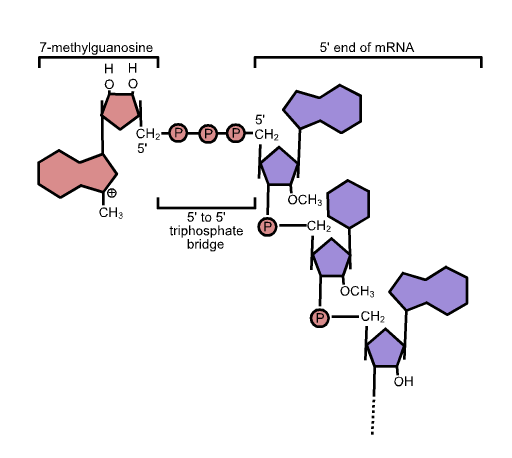 5′ cap structure: Capping of the pre-mRNA involves the addition of 7-methylguanosine (m7G) to the 5′ end. The cap protects the 5′ end of the primary RNA transcript from attack by ribonucleases and is recognized by eukaryotic initiation factors involved in assembling the ribosome on the mature mRNA prior to initiating translation.

While RNA Polymerase II is still transcribing downstream of the proper end of a gene, the pre-mRNA is cleaved by an endonuclease-containing protein complex between an AAUAAA consensus sequence and a GU-rich sequence. This releases the functional pre-mRNA from the rest of the transcript, which is still attached to the RNA Polymerase. An enzyme called poly (A) polymerase (PAP) is part of the same protein complex that cleaves the pre-mRNA and it immediately adds a string of approximately 200 A nucleotides, called the poly (A) tail, to the 3′ end of the just-cleaved pre-mRNA. The poly (A) tail protects the mRNA from degradation, aids in the export of the mature mRNA to the cytoplasm, and is involved in binding proteins involved in initiating translation.

Poly (A) Polymerase adds a 3′ poly (A) tail to the pre-mRNA.: The pre-mRNA is cleaved off the rest of the growing transcript before RNA Polymerase II has stopped transcribing. This cleavage is done by an endonuclease-containing protein complex that binds to an AAUAAA sequence upstream of the cleavage site and to a GU-rich sequence downstream of the cut site. Immediately after the cleavage, Poly (A) Polymerase (PAP), which is also part of the protein complex, catalyzes the addition of up to 200 A nucleotides to the 3′ end of the just-cleaved pre-mRNA.

Eukaryotic genes are composed of exons, which correspond to protein-coding sequences (ex-on signifies that they are expressed), and intervening sequences called introns (int-ron denotes their intervening role), which may be involved in gene regulation, but are removed from the pre-mRNA during processing. Intron sequences in mRNA do not encode functional proteins.

The discovery of introns came as a surprise to researchers in the 1970s who expected that pre-mRNAs would specify protein sequences without further processing, as they had observed in prokaryotes. The genes of higher eukaryotes very often contain one or more introns. While these regions may correspond to regulatory sequences, the biological significance of having many introns or having very long introns in a gene is unclear. It is possible that introns slow down gene expression because it takes longer to transcribe pre-mRNAs with lots of introns. Alternatively, introns may be nonfunctional sequence remnants left over from the fusion of ancient genes throughout evolution. This is supported by the fact that separate exons often encode separate protein subunits or domains. For the most part, the sequences of introns can be mutated without ultimately affecting the protein product.

All introns in a pre-mRNA must be completely and precisely removed before protein synthesis. If the process errs by even a single nucleotide, the reading frame of the rejoined exons would shift, and the resulting protein would be dysfunctional. The process of removing introns and reconnecting exons is called splicing. Introns are removed and degraded while the pre-mRNA is still in the nucleus. Splicing occurs by a sequence-specific mechanism that ensures introns will be removed and exons rejoined with the accuracy and precision of a single nucleotide. The splicing of pre-mRNAs is conducted by complexes of proteins and RNA molecules called spliceosomes. 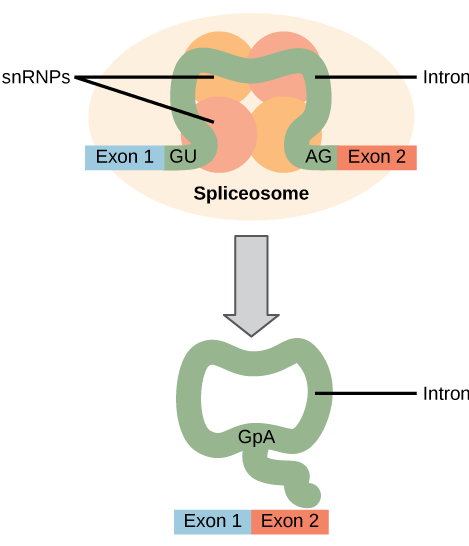 Pre-mRNA splicing: Pre-mRNA splicing involves the precise removal of introns from the primary RNA transcript. The splicing process is catalyzed by large complexes called spliceosomes. Each spliceosome is composed of five subunits called snRNPs. The spliceseome’s actions result in the splicing together of the two exons and the release of the intron in a lariat form. 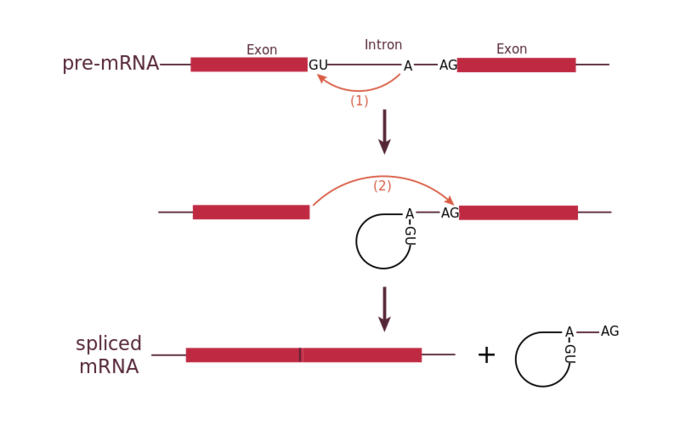 rRNA and tRNA are structural molecules that aid in protein synthesis but are not themselves translated into protein.

Describe how pre-rRNAs and pre-tRNAs are processed into mature rRNAs and tRNAs.

The tRNAs and rRNAs are structural molecules that have roles in protein synthesis; however, these RNAs are not themselves translated. In eukaryotes, pre-rRNAs are transcribed, processed, and assembled into ribosomes in the nucleolus, while pre-tRNAs are transcribed and processed in the nucleus and then released into the cytoplasm where they are linked to free amino acids for protein synthesis.

The four rRNAs in eukaryotes are first transcribed as two long precursor molecules. One contains just the pre-rRNA that will be processed into the 5S rRNA; the other spans the 28S, 5.8S, and 18S rRNAs. Enzymes then cleave the precursors into subunits corresponding to each rRNA. In bacteria, there are only three rRNAs and all are transcribed in one long precursor molecule that is cleaved into the individual rRNAs. Some of the bases of pre-rRNAs are methylated for added stability. Mature rRNAs make up 50-60% of each ribosome. Some of a ribosome’s RNA molecules are purely structural, whereas others have catalytic or binding activities.

The two subunits join to constitute a functioning ribosome that is capable of creating proteins.

Each different tRNA binds to a specific amino acid and transfers it to the ribosome. Mature tRNAs take on a three-dimensional structure through intramolecular basepairing to position the amino acid binding site at one end and the anticodon in an unbasepaired loop of nucleotides at the other end. The anticodon is a three-nucleotide sequence, unique to each different tRNA, that interacts with a messenger RNA (mRNA) codon through complementary base pairing. 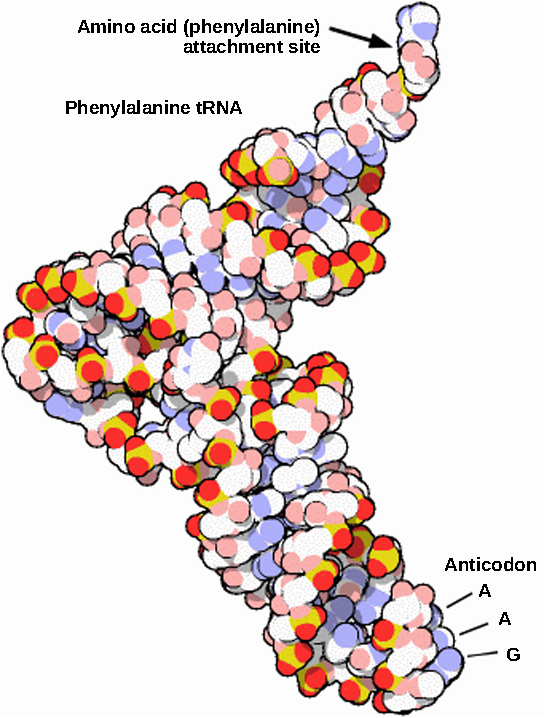 The processing to convert the pre-tRNA to a mature tRNA involves five steps.

3. In all eukaryote pre-tRNAs, but in only some bacterial and archaeal pre-tRNAs, a CCA sequence of nucleotides is added to the 3′ end of the pre-tRNA after the original 3′ end is trimmed off. Some bacteria and archaea pre-tRNAs already have the CCA encoded in their transcript immediately upstream of the 3′ cleavage site, so they don’t need to add one. The CCA at the 3′ end of the mature tRNA will be the site at which the tRNA’s amino acid will be added.

5. A significant number of eukaryotic and archaeal pre-tRNAs have introns that have to be spliced out. Introns are rarer in bacterial pre-tRNAs, but do occur occasionally and are spliced out.