There are various types of tactile mechanoreceptors that work together to signal and process “touch.”

Describe the structure and function of mechanoreceptors

Sensory receptors are classified into five categories: mechanoreceptors, thermoreceptors, proprioceptors, pain receptors, and chemoreceptors. These categories are based on the nature of the stimuli that each receptor class transduces. Mechanoreceptors in the skin are described as encapsulated or unencapsulated. A free nerve ending is an unencapsulated dendrite of a sensory neuron; they are the most common nerve endings in skin. Free nerve endings are sensitive to painful stimuli, to hot and cold, and to light touch. They are slow to adjust to a stimulus and so are less sensitive to abrupt changes in stimulation.

There are three classes of mechanoreceptors: tactile, proprioceptors, and baroreceptors. Mechanoreceptors sense stimuli due to physical deformation of their plasma membranes. They contain mechanically-gated ion channels whose gates open or close in response to pressure, touch, stretching, and sound. There are four primary tactile mechanoreceptors in human skin: Merkel’s disks, Meissner’s corpuscles, Ruffini endings, and Pacinian corpuscle; two are located toward the surface of the skin and two are located deeper. A fifth type of mechanoreceptor, Krause end bulbs, are found only in specialized regions. 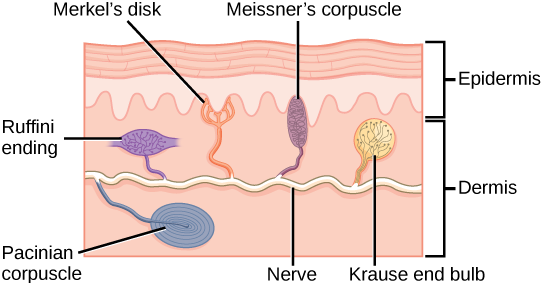 Merkel’s disks are found in the upper layers of skin near the base of the epidermis, both in skin that has hair and on glabrous skin; that is, the hairless skin found on the palms and fingers, the soles of the feet, and the lips of humans and other primates. Merkel’s disks are densely distributed in the fingertips and lips. They are slow-adapting, unencapsulated nerve endings, which respond to light touch. Light touch, also known as discriminative touch, is a light pressure that allows the location of a stimulus to be pinpointed. The receptive fields of Merkel’s disks are small, with well-defined borders. That makes them very sensitive to edges; they come into use in tasks such as typing on a keyboard.

Meissner’s corpuscles, also known as tactile corpuscles, are found in the upper dermis, but they project into the epidermis. They are found primarily in the glabrous skin on the fingertips and eyelids. They respond to fine touch and pressure, but they also respond to low-frequency vibration or flutter. They are rapidly- adapting, fluid-filled, encapsulated neurons with small, well-defined borders which are responsive to fine details. Merkel’s disks and Meissner’s corpuscles are not as plentiful in the palms as they are in the fingertips. 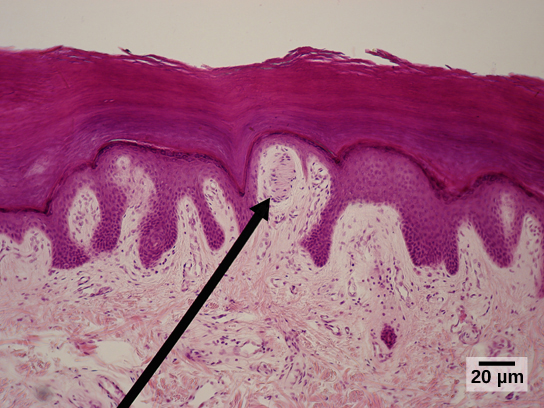 Deeper in the dermis, near the base, are Ruffini endings, which are also known as bulbous corpuscles. They are found in both glabrous and hairy skin. These are slow-adapting, encapsulated mechanoreceptors that detect skin stretch and deformations within joints; they provide valuable feedback for gripping objects and controlling finger position and movement. Thus, they also contribute to proprioception and kinesthesia. Ruffini endings also detect warmth. Note that these warmth detectors are situated deeper in the skin than are the cold detectors. It is not surprising, then, that humans detect cold stimuli before they detect warm stimuli.

Pacinian corpuscles, located deep in the dermis of both glabrous and hairy skin, are structurally similar to Meissner’s corpuscles. They are found in the bone periosteum, joint capsules, pancreas and other viscera, breast, and genitals. They are rapidly-adapting mechanoreceptors that sense deep, transient (not prolonged) pressure, and high-frequency vibration. Pacinian receptors detect pressure and vibration by being compressed which stimulates their internal dendrites. There are fewer Pacinian corpuscles and Ruffini endings in skin than there are Merkel’s disks and Meissner’s corpuscles. 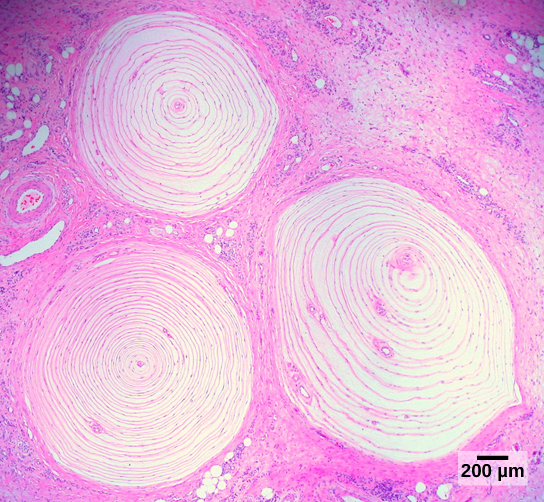 The many types of somatosensory receptors work together to ensure our ability to process the complexity of stimuli that are transmitted.

Describe how the density of mechanoreceptors affects the receptive field

The configuration of the different types of receptors working in concert in the human skin results in a very refined sense of touch. The nociceptive receptors (those that detect pain) are located near the surface. Small, finely-calibrated mechanoreceptors (Merkel’s disks and Meissner’s corpuscles) are located in the upper layers and can precisely localize even gentle touch. The large mechanoreceptors (Pacinian corpuscles and Ruffini endings) are located in the lower layers and respond to deeper touch. Consider that the deep pressure that reaches those deeper receptors would not need to be finely localized. Both the upper and lower layers of the skin hold rapidly- and slowly-adapting receptors. Both primary somatosensory cortex and secondary cortical areas are responsible for processing the complex picture of stimuli transmitted from the interplay of mechanoreceptors. 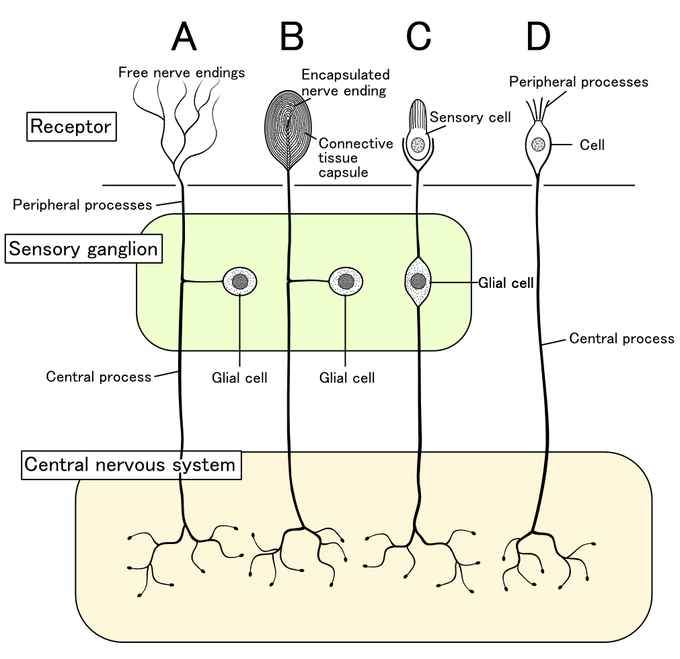 The relative density of pressure receptors in different locations on the body can be demonstrated experimentally using a two-point discrimination test. In this demonstration, two sharp points, such as two thumbtacks, are brought into contact with the subject’s skin (though not hard enough to cause pain or break the skin). The subject reports if they feel one point or two points. If the two points are felt as one point, it can be inferred that the two points are both in the receptive field of a single sensory receptor. If two points are felt as two separate points, each is in the receptive field of two separate sensory receptors. The points could then be moved closer and re-tested until the subject reports feeling only one point. The size of the receptive field of a single receptor could be estimated from that distance.

Thermoreception is the process of determining temperature by comparing the activation of different thermoreceptors in the brain.

Thermoception or thermoreception is the sense by which an organism perceives temperatures. The details of how temperature receptors work are still being investigated. Mammals have at least two types of sensors: those that detect heat (i.e., temperatures above body temperature) and those that detect cold (i.e., temperatures below body temperature). A thermoreceptor is a sensory receptor or, more accurately, the receptive portion of a sensory neuron that codes absolute and relative changes in temperature, primarily within the innocuous range. The adequate stimulus for a warm receptor is warming, which results in an increase in their action potential discharge rate; cooling results in a decrease in warm receptor discharge rate. For cold receptors, their firing rate increases during cooling and decreases during warming. The types of receptors capable of detecting changes in temperature can vary.

Some of the receptors that exhibit the ability to detect changes in temperature include Krause end bulbs and Ruffini endings. Krause end bulbs are defined by cylindrical or oval bodies consisting of a capsule that is formed by the expansion of the connective-tissue sheath, containing an axis-cylinder core. End-bulbs are found in the conjunctiva of the eye, in the mucous membrane of the lips and tongue, and in the epineurium of nerve trunks. They are also found in the penis and the clitoris; hence, the name of genital corpuscles. In these locations, they have a mulberry-like appearance, being constricted by connective-tissue septa into two to six knob-like masses. 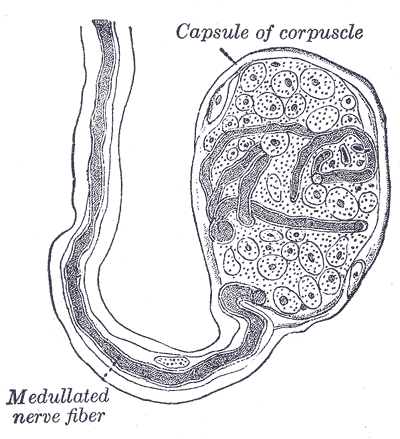 The Ruffini endings, enlarged dendritic endings with elongated capsules, can act as thermoreceptors. This spindle-shaped receptor is sensitive to skin stretch, contributing to the kinesthetic sense of and control of finger position and movement. Ruffini corpuscles respond to sustained pressure and show very little adaptation. Ruffinian endings are located in the deep layers of the skin where they register mechanical deformation within joints as well as continuous pressure states.They also act as thermoreceptors that respond for an extended period; in case of deep burn, there will be no pain as these receptors will be burned off.

In addition to Krause end bulbs that detect cold and Ruffini endings that detect warmth, there are different types of cold receptors on free nerve endings.

The thermoreceptor pathway in the brain runs from the spinal cord through the thalamus to the primary somatosensory cortex. Warmth and cold information from the face travels through one of the cranial nerves to the brain. You know from experience that a tolerably cold or hot stimulus can quickly progress to a much more intense stimulus that is no longer tolerable. Any stimulus that is too intense can be perceived as pain because temperature sensations are conducted along the same pathways that carry pain sensations.