Echinoderms are invertebrates that have pentaradial symmetry, a spiny skin, a water vascular system, and a simple nervous system.

Describe the characteristics of echinodermata

Echinodermata are so named owing to their spiny skin (from the Greek “echinos” meaning “spiny” and “dermos” meaning “skin”). This phylum is a collection of about 7,000 described living species. Echinodermata are exclusively marine organisms. Sea stars, sea cucumbers, sea urchins, sand dollars, and brittle stars are all examples of echinoderms. To date, no freshwater or terrestrial echinoderms are known. 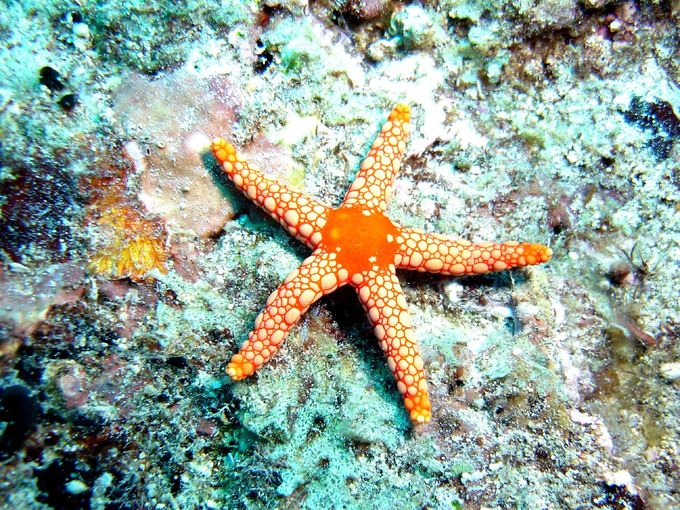 Sea stars: Star stars are among the most familiar of marine invertebrates. They are members of the phylum Echinodermata.

Adult echinoderms exhibit pentaradial symmetry and have a calcareous endoskeleton made of ossicles, although the early larval stages of all echinoderms have bilateral symmetry. The endoskeleton is developed by epidermal cells and may possess pigment cells that give vivid colors to these animals, as well as cells laden with toxins. Echinoderms possess a simple digestive system which varies according to the animal’s diet. Starfish are mostly carnivorous and have a mouth, oesophagus, two-part pyloric stomach with a pyloric duct leading to the intestine and rectum, with the anus located in the center of the aboral body surface. In many species, the large cardiac stomach can be everted and digest food outside the body. Gonads are present in each arm. In echinoderms such as sea stars, every arm bears two rows of tube feet on the oral side which help in attachment to the substratum. These animals possess a true coelom that is modified into a unique circulatory system called a water vascular system. The more notably distinct trait, which most echinoderms have, is their remarkable powers of regeneration of tissue, organs, limbs, and, in some cases, complete regeneration from a single limb.

Sea cucumbers: Sea cucumbers are a member of the phylum Echinodermata which are found on the sea floor worldwide. As with all echinoderms, sea cucumbers have an endoskeleton just below the skin, calcified structures that are usually reduced to isolated microscopic ossicles joined by connective tissue.

Echinoderms possess a unique ambulacral or water vascular system, consisting of a central ring canal and radial canals that extend along each arm. Water circulates through these structures and facilitates gaseous exchange as well as nutrition, predation, and locomotion. The water vascular system also projects from holes in the skeleton in the form of tube feet. These tube feet can expand or contract based on the volume of water (hydrostatic pressure) present in the system of that arm.

The madreporite is a light-colored, calcerous opening used to filter water into the water vascular system of echinoderms. Acting as a pressure-equalizing valve, it is visible as a small red or yellow button-like structure (similar to a small wart) on the aboral surface of the central disk of a sea star. Close up, it is visibly structured, resembling a “madrepore” colony. From this, it derives its name. Water enters the madreporite on the aboral side of the echinoderm. From there, it passes into the stone canal, which moves water into the ring canal. The ring canal connects the radial canals (there are five in a pentaradial animal), and the radial canals move water into the ampullae, which have tube feet through which the water moves. By moving water through the unique water vascular system, the echinoderm can move and force open mollusk shells during feeding.

Podocytes, cells specialized for ultrafiltration of bodily fluids, are present near the center of echinoderms. These podocytes are connected by an internal system of canals to the madreporite.

Differentiate among the classes of echinoderms

The most well-known echinoderms are members of class Asteroidea, or sea stars. They come in a large variety of shapes, colors, and sizes, with more than 1,800 species known so far. The key characteristic of sea stars that distinguishes them from other echinoderm classes includes thick arms (ambulacra; singular: ambulacrum) that extend from a central disk where organs penetrate into the arms. Sea stars use their tube feet not only for gripping surfaces, but also for grasping prey. Sea stars have two stomachs, one of which can protrude through their mouths and secrete digestive juices into or onto prey, even before ingestion. This process can essentially liquefy the prey, making digestion easier.

Brittle stars belong to the class Ophiuroidea. Unlike sea stars, which have plump arms, brittle stars have long, thin arms that are sharply demarcated from the central disk. Brittle stars move by lashing out their arms or wrapping them around objects and pulling themselves forward. Of all echinoderms, the Ophiuroidea may have the strongest tendency toward 5-segment radial (pentaradial) symmetry. Ophiuroids are generally scavengers or detritivores. Small organic particles are moved into the mouth by the tube feet. Ophiuroids may also prey on small crustaceans or worms. Some brittle stars, such as the six-armed members of the family Ophiactidae, are fissiparous (divide though fission), with the disk splitting in half. Regrowth of both the lost part of the disk and the arms occur, yielding an animal with three large arms and three small arms during the period of growth.

Sea urchins and sand dollars are examples of Echinoidea. These echinoderms do not have arms, but are hemispherical or flattened with five rows of tube feet that help them in slow movement; tube feet are extruded through pores of a continuous internal shell called a test. Like other echinoderms, sea urchins are bilaterans. Their early larvae have bilateral symmetry, but they develop fivefold symmetry as they mature. This is most apparent in the “regular” sea urchins, which have roughly spherical bodies, with five equally-sized parts radiating out from their central axes. Several sea urchins, however, including the sand dollars, are oval in shape, with distinct front and rear ends, giving them a degree of bilateral symmetry. In these urchins, the upper surface of the body is slightly domed, but the underside is flat, while the sides are devoid of tube feet. This “irregular” body form has evolved to allow the animals to burrow through sand or other soft materials. 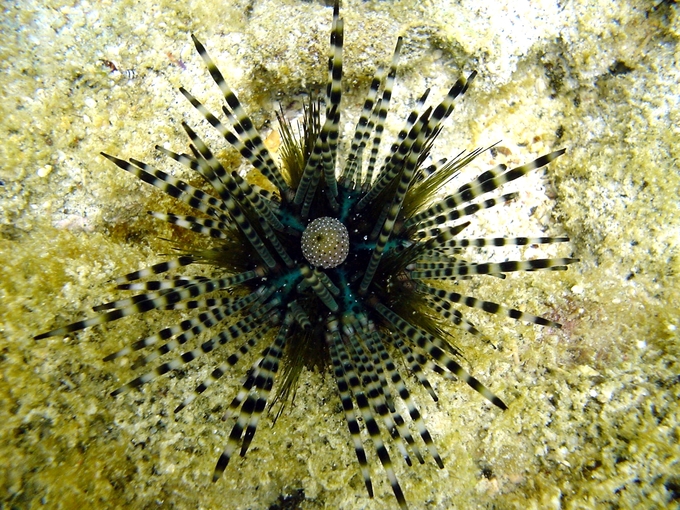 Sea urchins: Sea urchins do not have arms, but have rows of tube feet that can be extended out of pores of the internal shell.

Sea lilies and feather stars are examples of Crinoidea. Both of these species are suspension feeders. They live both in shallow water and in depths as great as 6,000 meters. Sea lilies refer to the crinoids which, in their adult form, are attached to the sea bottom by a stalk. Feather stars or comatulids refer to the unstalked forms. Crinoids are characterized by a mouth on the top surface that is surrounded by feeding arms. They have a U-shaped gut; their anus is located next to the mouth. Although the basic echinoderm pattern of fivefold symmetry can be recognized, most crinoids have many more than five arms. Crinoids usually have a stem used to attach themselves to a substrate, but many live attached only as juveniles and become free-swimming as adults. 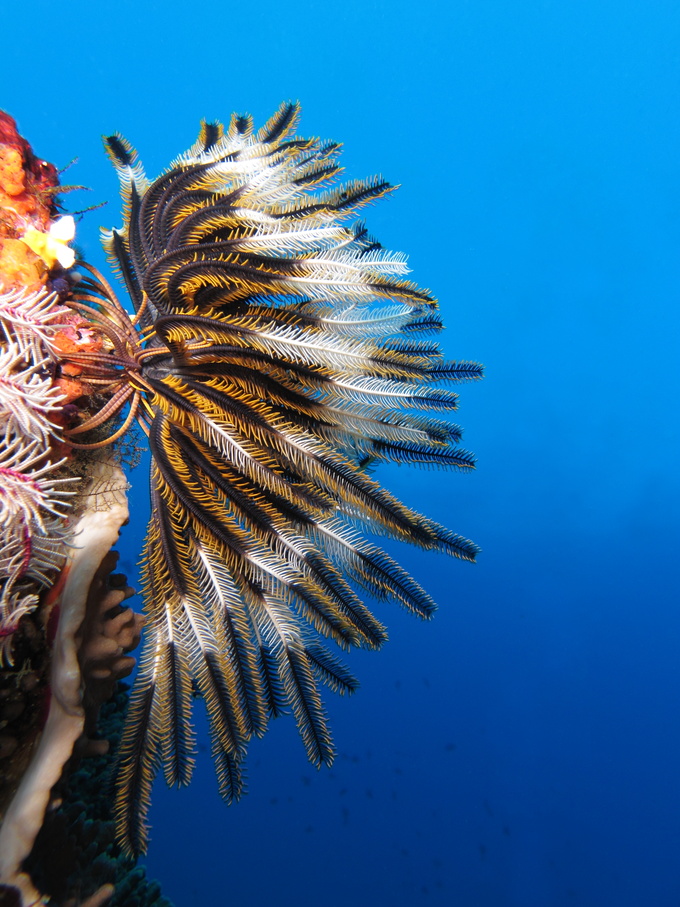 Sea lilies: Sea lilies, like feather stars, have a mouth on their upper surface that is surrounded by arms used for feeding.

Sea cucumbers of class Holothuroidea are extended in the oral-aboral axis and have five rows of tube feet. These are the only echinoderms that demonstrate “functional” bilateral symmetry as adults because the uniquely-extended oral-aboral axis compels the animal to lie horizontally rather than stand vertically. Like all echinoderms, sea cucumbers have an endoskeleton just below the skin: calcified structures that are usually reduced to isolated microscopic ossicles joined by connective tissue. In some species these can sometimes be enlarged to flattened plates, forming armor. In pelagic species, such as Pelagothuria natatrix, the skeleton and a calcareous ring are absent. 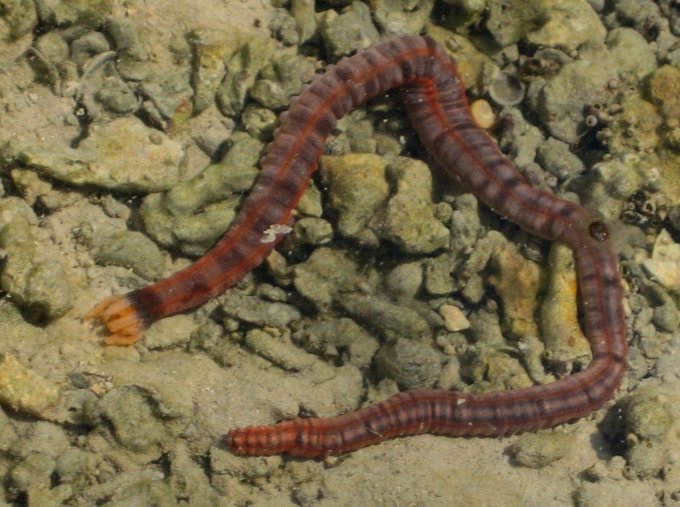 Sea cucumbers: Sea cucumbers are the only echinoderms that demonstrate “functional” bilateral symmetry as adults, as they lie horizontally as opposed to the vertical axis of other echinoderms.

The phylum Chordata contains all animals that have a dorsal notochord at some stage of development; in most cases, this is the backbone.

Name the features that distinguish the members of the phylum chordata

Animals in the phylum Chordata share four key features that appear at some stage of their development:

In some groups, some of these traits are present only during embryonic development. In addition to containing vertebrate classes, the phylum Chordata contains two clades of invertebrates: Urochordata (tunicates) and Cephalochordata (lancelets). However, even though they are invertebrates, they share characteristics with other chordates that places them in this phylum. For example, tunicate larvae have both a notochord and a nerve cord which are lost in adulthood. Most tunicates live on the ocean floor and are suspension feeders. Cephalochordates, or lancelets, have a notochord and a nerve cord (but no brain or specialist sensory organs) and a very simple circulatory system. Lancelets are suspension feeders that feed on phytoplankton and other microorganisms.

Structures present in a tunicate larva: While tunicates are invertebrates and may seem very different from the more familiar members of Chordata, the tunicate larva possesses both a notochord and a dorsal nerve cord, although both are lost in adulthood.

The phylum Chordata contains all of the animals that have a rod-like structure used to give them support. In most cases this is the spine or backbone. Within Chordata there are five classes of animals: fish, amphibians, reptiles, birds, and mammals. Three dividing factors separate these classes: 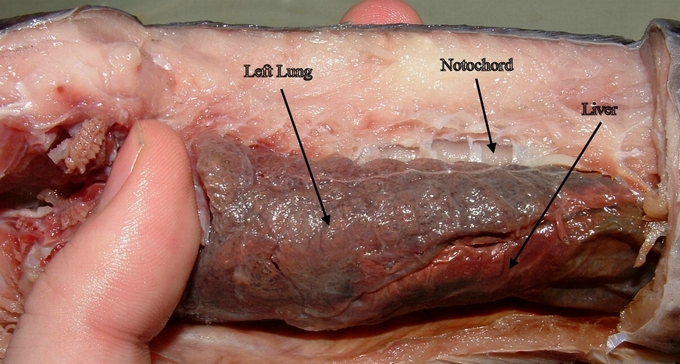 Notochord: All chordates possess a notochord, or a type of flexible support rod, at some point in their development. In this dissected lungfish, which is a member of the chordates, tissues have been dissected away to display the notochord.