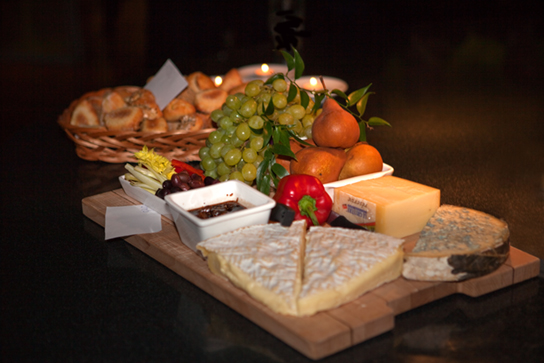 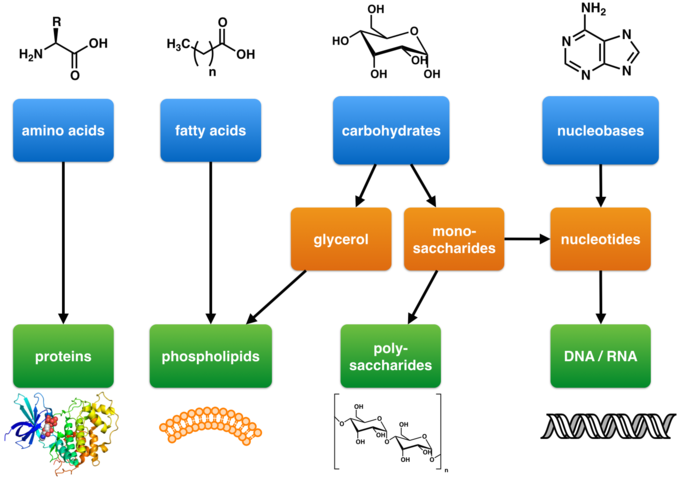 Examples of these monomers and polymers can be found in the sugar you might put in your coffee or tea. Regular table sugar is the disaccharide sucrose (a polymer), which is composed of the monosaccharides fructose and glucose (which are monomers). If we were to string many carbohydrate monomers together we could make a polysaccharide like starch. The prefixes “mono-” (one), “di-” (two),and “poly-” (many) will tell you how many of the monomers have been joined together in a molecule.

In dehydration synthesis, monomers combine with each other via covalent bonds to form polymers.

Most macromolecules are made from single subunits, or building blocks, called monomers. The monomers combine with each other via covalent bonds to form larger molecules known as polymers. In doing so, monomers release water molecules as byproducts. This type of reaction is known as dehydration synthesis, which means “to put together while losing water. ” It is also considered to be a condensation reaction since two molecules are condensed into one larger molecule with the loss of a smaller molecule (the water.)

In a dehydration synthesis reaction between two un-ionized monomers, such as monosaccharide sugars, the hydrogen of one monomer combines with the hydroxyl group of another monomer, releasing a molecule of water in the process. The removal of a hydrogen from one monomer and the removal of a hydroxyl group from the other monomer allows the monomers to share electrons and form a covalent bond. Thus, the monomers that are joined together are being dehydrated to allow for synthesis of a larger molecule.

A dehydration synthesis reaction involving un-ionized moners..: In the dehydration synthesis reaction between two molecules of glucose, a hydroxyl group from the first glucose is combined with a hydrogen from the second glucose, creating a covalent bond that links the two monomeric sugars (monosaccharides) together to form the dissacharide maltose. In the process, a water molecule is formed.

When the monomers are ionized, such as is the case with amino acids in an aqueous environment like cytoplasm, two hydrogens from the positively-charged end of one monomer are combined with an oxygen from the negatively-charged end of another monomer, again forming water, which is released as a side-product, and again joining the two monomers with a covalent bond.

As additional monomers join via multiple dehydration synthesis reactions, the chain of repeating monomers begins to form a polymer. Different types of monomers can combine in many configurations, giving rise to a diverse group of macromolecules. Three of the four major classes of biological macromolecules (complex carbohydrates, nucleic acids, and proteins), are composed of monomers that join together via dehydration synthesis reactions. Complex carbohydrates are formed from monosaccharides, nucleic acids are formed from mononucleotides, and proteins are formed from amino acids.

There is great diversity in the manner by which monomers can combine to form polymers. For example, glucose monomers are the constituents of starch, glycogen, and cellulose. These three are polysaccharides, classified as carbohydrates, that have formed as a result of multiple dehydration synthesis reactions between glucose monomers. However, the manner by which glucose monomers join together, specifically locations of the covalent bonds between connected monomers and the orientation (stereochemistry) of the covalent bonds, results in these three different polysaccharides with varying properties and functions. In nucleic acids and proteins, the location and stereochemistry of the covalent linkages connecting the monomers do not vary from molecule to molecule, but instead the multiple kinds of monomers (five different monomers in nucleic acids, A, G, C, T, and U mononucleotides; 21 different amino acids monomers in proteins) are combined in a huge variety of sequences. Each protein or nucleic acid with a different sequence is a different molecule with different properties.

Hydrolysis reactions result in the breakdown of polymers into monomers by using a water molecule and an enzymatic catalyst.

Polymers are broken down into monomers in a process known as hydrolysis, which means “to split water,” a reaction in which a water molecule is used during the breakdown. During these reactions, the polymer is broken into two components. If the components are un-ionized, one part gains a hydrogen atom (H-) and the other gains a hydroxyl group (OH–) from a split water molecule. This is what happens when monosaccharides are released from complex carbohydrates via hydrolysis.

If the components are ionized after the split, one part gains two hydrogen atoms and a positive charge, the other part gains an oxygen atom and a negative charge. This is what happens when amino acids are released from protein chains via hydrolysis.

These reactions are in contrast to dehydration synthesis (also known as condensation) reactions. In dehydration synthesis reactions, a water molecule is formed as a result of generating a covalent bond between two monomeric components in a larger polymer. In hydrolysis reactions, a water molecule is consumed as a result of breaking the covalent bond holding together two components of a polymer.