Plants obtain inorganic elements from the soil, which serves as a natural medium for land plants. Soil is the outer, loose layer that covers the surface of Earth. Soil quality, a major determinant, along with climate, of plant distribution and growth, depends not only on the chemical composition of the soil, but also the topography (regional surface features) and the presence of living organisms.

Soil consists of these major components: 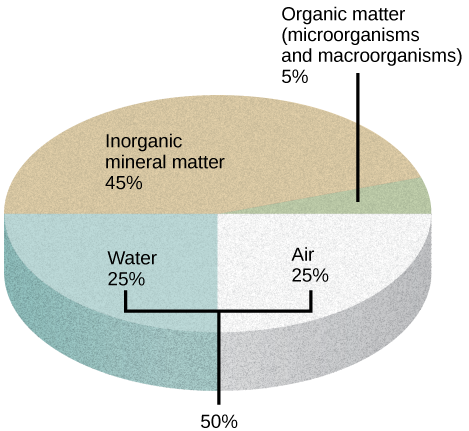 The amount of each of the four major components of soil depends on the quantity of vegetation, soil compaction, and water present in the soil. A good, healthy soil has sufficient air, water, minerals, and organic material to promote and sustain plant life.

The organic material of soil, called humus, is made up of microorganisms (dead and alive), and dead animals and plants in varying stages of decay. Humus improves soil structure, providing plants with water and minerals. The inorganic material of soil is composed of rock, slowly broken down into smaller particles that vary in size. Soil particles that are 0.1 to 2 mm in diameter are sand. Soil particles between 0.002 and 0.1 mm are called silt, and even smaller particles, less than 0.002 mm in diameter, are called clay. Some soils have no dominant particle size, containing a mixture of sand, silt, and humus; these soils are called loams.

Soil formation is the result of a combination of five factors: parent material, climate, topography, biological factors, and time.

Describe the five factors that account for soil formation

Soil formation is the consequence of a combination of biological, physical, and chemical processes. Soil should ideally contain 50 percent solid material and 50 percent pore space. About one-half of the pore space should contain water, while the other half should contain air. The organic component of soil serves as a cementing agent, returns nutrients to the plant, allows soil to store moisture, makes soil tillable for farming, and provides energy for soil microorganisms. Most soil microorganisms, bacteria, algae, or fungi, are dormant in dry soil, but become active once moisture is available.

Soil distribution is not homogenous because its formation results in the production of layers; the vertical section of the layers of soil is called the soil profile. Within the soil profile, soil scientists define zones called horizons: a soil layer with distinct physical and chemical properties that differ from those of other layers. Five factors account for soil formation: parent material, climate, topography, biological factors, and time.

The organic and inorganic material in which soils form is the parent material. Mineral soils form directly from the weathering of bedrock, the solid rock that lies beneath the soil; therefore, they have a similar composition to the original rock. Other soils form in materials that came from elsewhere, such as sand and glacial drift. Materials located in the depth of the soil are relatively unchanged compared with the deposited material. Sediments in rivers may have different characteristics, depending on whether the stream moves quickly or slowly. A fast-moving river could have sediments of rocks and sand, whereas a slow-moving river could have fine-textured material, such as clay. 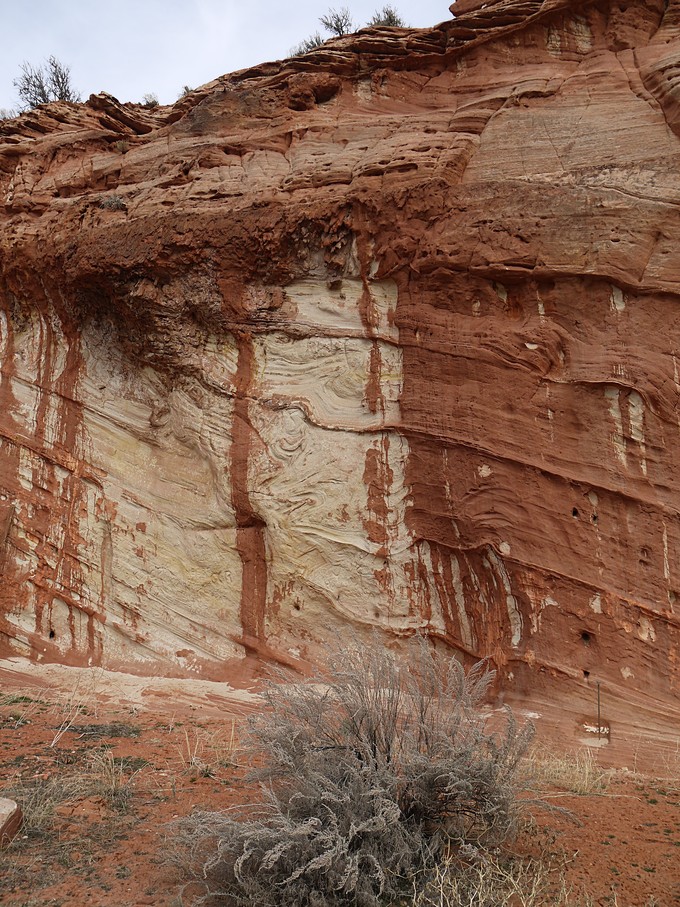 Soft sediment deformation: Soil distribution is not the same at all depths. The vertical section of soil layers is called the soil profile. The soil profile contains defined zones called horizons whicht have distinct physical and chemical properties that differ from those of other layers. An example is shown here in the soft sediment deformation in the Navajo Sandstone.

Temperature, moisture, and wind cause different patterns of weathering, which affect soil characteristics. The presence of moisture and nutrients from weathering will also promote biological activity: a key component of a quality soil.

Regional surface features (familiarly called “the lay of the land”) can have a major influence on the characteristics and fertility of a soil. Topography affects water runoff, which strips away parent material and affects plant growth. Steep soils are more prone to erosion and may be thinner than soils that are relatively flat or level.

The presence of living organisms greatly affects soil formation and structure. Animals and microorganisms can produce pores and crevices. Plant roots can penetrate into crevices to produce more fragmentation. Plant secretions promote the development of microorganisms around the root in an area known as the rhizosphere. Additionally, leaves and other material that fall from plants decompose and contribute to soil composition.

Time is an important factor in soil formation because soils develop over long periods. Soil formation is a dynamic process. Materials are deposited over time, decompose, and transform into other materials that can be used by living organisms or deposited onto the surface of the soil.

Soils are made up of combinations of four distinct layer types or horizons: O horizon, A horizon, B horizon, and C horizon.

Describe the physical properties or profile of soil

Physical Properties of the Soil

Soils are named and classified based on their horizons. The soil profile has four distinct layers: 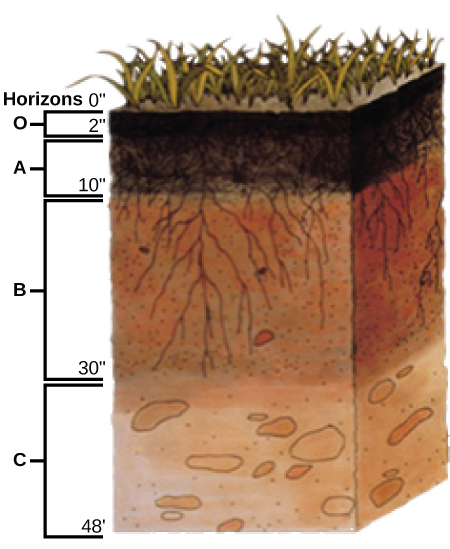 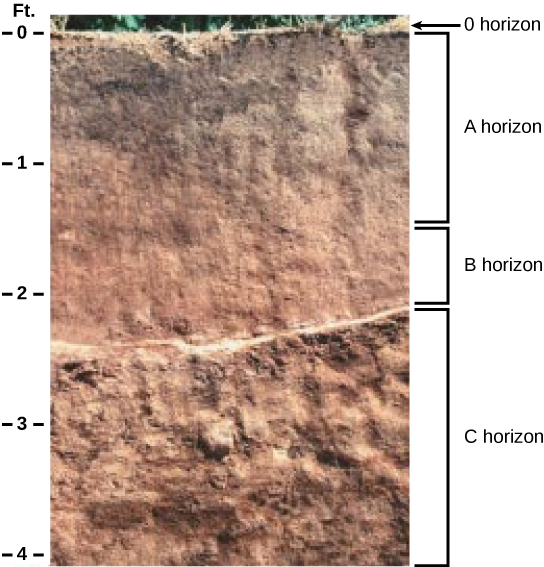 Mature soil: The San Joaquin soil is a mature soil that has an O horizon, A horizon, B horizon, and C horizon.