Through collective bargaining, employers and employees negotiate the conditions of employment.

Define the monopoly union model, the right-to-manage model, and the efficient bargaining model as theories of collective bargaining

Collective bargaining is a process of negotiation between employers and a group of employees aimed at reaching an agreement that regulates working conditions.

The right to collectively bargain is recognized through international human rights conventions. Article 23 of the Universal Declaration of Human Rights identifies the ability to organize trade unions as a fundamental human right. Item 2(a) of the International Labour Organization’s Declaration on Fundamental Principles and Rights at Work defines the “freedom of association and the effective recognition of the right to collective bargaining” as an essential right of workers.

The collective agreements reached by these negotiations usually set out wage scales, working hours, training, health and safety, overtime, grievance mechanisms, and rights to participate in workplace or company affairs.

Different economic theories provide a number of models intended to explain some aspects of collective bargaining:

Labor arbitration has been used as an alternative to strikes to resolve labor disputes for more than a century.

Arbitration has been used as a means of resolving labor disputes for more than a century. Labor organizations in the United States, such as the National Labor Union, called for arbitration as early as 1866 as an alternative to strikes to resolve disputes over the wages, benefits and other rights that workers enjoy. Governments have also relied on arbitration to resolve particularly large labor disputes, such as the Coal Strike of 1902.

This type of arbitration, wherein a neutral arbitrator decides the terms of the collective bargaining agreement, is commonly known as interest arbitration. The United Steelworkers of America adopted an elaborate form of interest arbitration, known as the Experimental Negotiating Agreement, in the 1970s as a means of avoiding the long and costly strikes that had made the industry vulnerable to foreign competition.

Major League Baseball uses a variant of interest arbitration, in which an arbitrator chooses between the two sides’ final offers, to set the terms for contracts for players who are not eligible for free agency. Interest arbitration is now most frequently used by public employees who have no right to strike (for example, law enforcement and firefighters).

Unions and employers have also employed arbitration to resolve employee and union grievances arising under a collective bargaining agreement. The Amalgamated Clothing Workers of America made arbitration a central element of the Protocol of Peace it negotiated with garment manufacturers in the second decade of the twentieth century. Grievance arbitration became even more popular during World War II, when most unions had adopted a no-strike pledge.

Arbitration in the Eyes of the Law

The Supreme Court subsequently made labor arbitration a key aspect of federal labor policy in three cases which came to be known as the Steelworkers’ Trilogy. The Court held that grievance arbitration was a preferred dispute resolution technique and that courts could not overturn arbitrators’ awards unless the award does not draw its essence from the collective bargaining agreement.

These protections for arbitrator awards are premised on the union-management system, which provides both parties with due process. Due process in this context means that both parties have experienced representation throughout the process, and that the arbitrators practice only as neutrals. 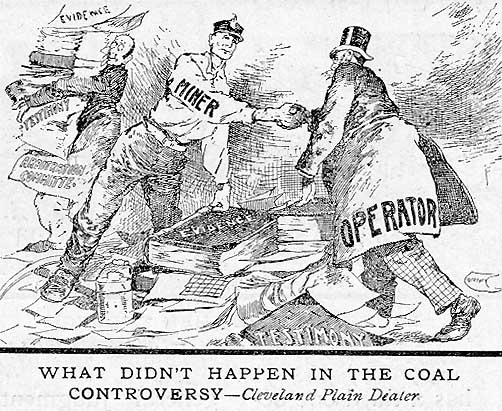 Political Cartoon about the Anthracite Coal Strike: The two sides were supposed to listen to expert testimony and come to a friendly agreement; cartoon from the Cleveland Dealer