Equity theory states that perceptions of equality in the input/outcome ratio of employees determines their relative job satisfaction.

Equity theory was first developed in 1963 by John Stacey Adams, a workplace and behavioral psychologist, who asserted that employees seek to maintain equity between the inputs that they bring to a job and the outcomes that they receive from it, against the perceived inputs and outcomes of others.

An individual will consider that he is treated fairly if he perceives the ratio of his inputs to his outcomes to be equivalent to those around him.

Formula expressing equal equity theory: Ratio of one individual’s outputs to inputs is perceived as equal to that of another individual in comparison.

Outcomes are defined as the positive and negative consequences that an individual perceives a participant has incurred as a consequence of his/her relationship with another. When the ratio of inputs to outcomes is close, then the employee should be very satisfied with their job. Outcomes can be both tangible and intangible.

Expectancy Theory postulates that an individual’s motivation can be derived through identifying an appropriate expectation.

Expectancy Theory, initially put forward by Victor Vroom at the Yale School of Management, suggests that behavior is motivated by the anticipated result or consequences expected. The concept of choice is central to this theory, as there are a variety of behaviors that an individual could potentially choose. To anticipate what choice will be made, identify what consequences would be expected as an outcome, and select the motivation which will result in the optimal outcome.

Expectancy Theory boils down to a few simple variables, which in conjunction produce the projected outcome based upon the motivational inputs. This is described as three relationships using four inputs:

What you’ll notice is a full equation, where each variable leads to the next: 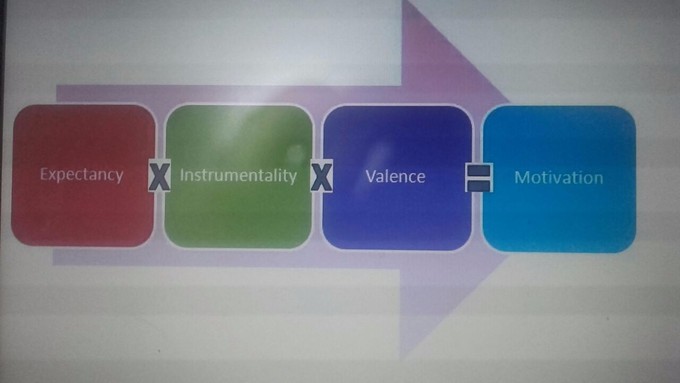 Expectancy Theory: This illustration visually expresses the three relationships that ultimately equate to a given motivation.

Moving from effort to performance requires three things. First is self-efficacy, or the belief that one can accomplish the goal. Second is the appropriate goal difficulty. Third is the perception of control, the concept that accomplishing the objectives is within one’s influence.

To move from performance to outcome, the individual must trust that the delivery of a given output will result in the desired reward. An example of this could be a commission on a sale. Established policies in place, preferably via a contract, will guarantee the reward will be delivered based upon an agreed upon performance.

This is simply the valuation of a given reward from the individual being motivated. This can be intrinsically positive or negative, which is to say the pursuit of OR avoidance of an outcome. This is why it is called a valence. Based upon the values, desires, and objectives of an individual, the individual will have a certain valued reaction to the reward. If one reward has a more extreme valence than another, it will consequently result in a higher level of motivation.

Expectancy Theory combines these three concepts into the conclusion that these three interactions will ultimately create a desired motivational response.

If done correctly, having more specific and well-enumerated goals lead to higher performance and a greater chance of achieving those goals.

Explain the procedures and outcomes of goal setting

Goals that are difficult to achieve and specific tend to increase performance more than goals that are not. A goal can become more specific through quantification or enumeration (should be measurable), such as by demanding “…increase productivity by 50%,” or by defining certain tasks that must be completed. 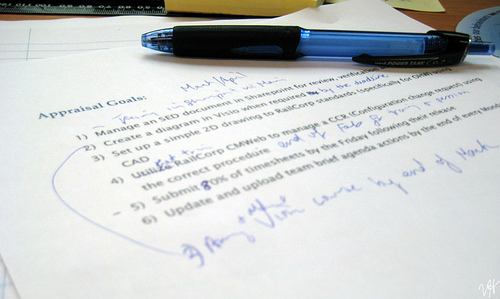 Goal-Setting Theory: Goals lead to higher performance in an organization.

Psychologists have examined the behavioral effects of goal-setting, concluding in 90% of laboratory and field studies that specific and challenging goals led to higher performance than when the goals were easy or did not exists.

While some managers believe it is sufficient to urge employees to “do their best,” psychologists have disagreed on this style’s effectiveness. Some psychologists have found that people who are told to “do their best” don’t. To elicit some specific form of behavior from others, it is important that all employees have a clear understanding what is expected. “Doing their best” does not provide that clear measure. A goal is important because it establishes a specified direction and measure of performance.

However, when goals are established at a management level and thereafter solely laid down, employee motivation with regard to achieving these goals is rather suppressed. To increase motivation, employees must be involved in the goal setting process and the goals must be challenging as well.

People perform better when they are committed to achieve certain goals. Goal commitment is dependent on:

These success factors are interdependent. For example the expected outcomes of goals are positively influenced when employees are involved in the goal setting process. Not only does participation increase commitment in attaining the goals that are set, participation influences self-efficacy as well.

Goal-commitment, the most influential moderator, becomes especially important when dealing with difficult or complex goals. If people lack commitment to goals, they lack motivation to reach them. To commit to a goal, one must believe in its importance or significance.

The enhancement of performance through goals requires feedback. Goal setting and feedback go hand in hand. Without feedback, goal setting is unlikely to work. Providing feedback on short-term objectives helps to sustain motivation and commitment to a goal. Besides, feedback should be provided on the strategies followed to achieve the goals and the final outcomes achieved as well. Feedback on strategies to obtain goals is very important, especially for complex work, because challenging goals put focus on outcomes rather than on performance strategies, so they impair performance.

Proper feedback is also very essential, and the following hints may help for providing a good feedback:

Reinforcement theory, or operant conditioning, is a implementation of cause and effect thinking into workplace motivation.

The basic premise behind B.F. Skinner’s Theory of Reinforcement is both simple and intuitive: an individual’s behavior is a function of its consequences. Think of it as a simple cause and effect graph. Every behavior will be a cause that creates some sort of consequence as an effect. If I work hard today, I’ll make more money. If I make more money, I’m more likely to want to work hard. This creates behavioral reinforcement, where the desired behavior is enabled and promoted by the desired outcome from a behavior. 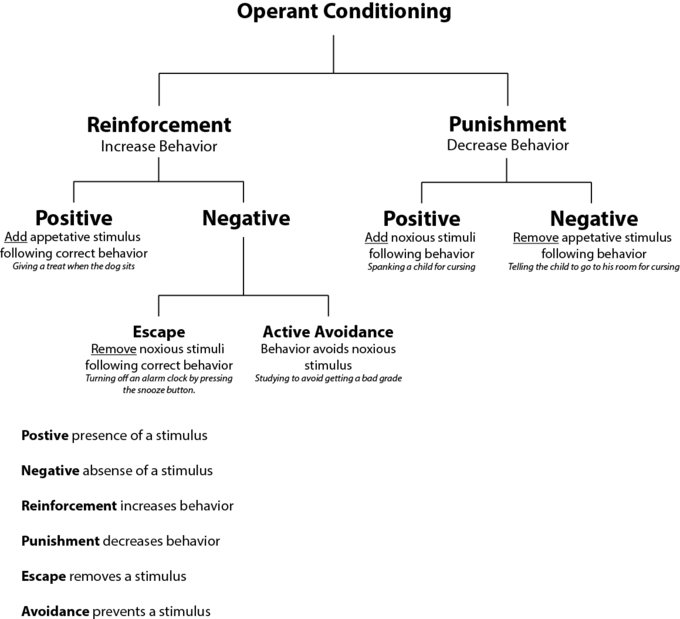 Operant Conditioning: This chart demonstrates the various facets of operant conditioning, which can be framed via reinforcement and punishment (both positive and negative for each).

Positive reinforcement: When a behavior (and subsequent response) is rewarding, the frequency of that behavior will be increased. For example, if an employee identifies a new market opportunity that creates profit, an organization may give her a bonus. This will positively reinforce the desired behavior.

Negative reinforcement: When a desired behavior is responded to with the removal of something the individual doesn’t like, the behavior is reinforced. For example, an employee demonstrates a strong sense of work ethic and wraps up a few projects faster than expected. This employee happens to have a long commute. The manager tells the employee to go ahead and work from home for a few days, considering how much progress she has made. This is an example of removing a negative stimuli for reinforcing a behavior.

Positive punishment: Conditioning at it’s simplest, punishment is simply identifying a negative behavior and providing an adverse stimuli to dissuade future instances. A simple example would be suspending an employee for inappropriate behavior.

Reinforcement can be impacted by various factors:

Satiation – In short, the degree of need. If an employee is quite wealthy, for example, it may not be particularly helpful to offer a bonus.

Immediacy – The time between the desired behavior and the potential reinforcement will have impact on how significantly the reinforcement will be correlated with the behavior. To use the bonus example, if an employee does something great, don’t wait around to provide a bonus. Make sure it’s fresh in their minds; this helps associate the outcome cause with the effect.