Differential equations are solved by finding the function for which the equation holds true.

Calculate the order and degree of a differential equation.

A differential equation is a mathematical equation for an unknown function of one or several variables that relates the values of the function itself to its derivatives of various orders. Differential equations play a prominent role in engineering, physics, economics, and other disciplines.

Differential equations can be used to model a variety of physical systems.

Give examples of systems that can be modeled with differential equations

Differential equations are very important in the mathematical modeling of physical systems. 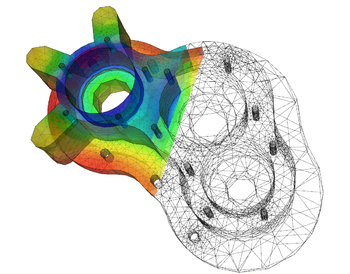 Visual Model of Heat Transfer: Visualization of heat transfer in a pump casing, created by solving the heat equation. Heat is being generated internally in the casing and being cooled at the boundary, providing a steady state temperature distribution.

A good example of a physical system modeled with differential equations is radioactive decay in physics.

We can combine these quantities in a differential equation to determine the activity of the substance. For a number of radioactive particles [latex]N[/latex], the activity [latex]A[/latex], or number of decays per time is given by:

Direction fields and Euler’s method are ways of visualizing and approximating the solutions to differential equations.

The slope field is traditionally defined for differential equations of the following form:

It can be viewed as a creative way to plot a real-valued function of two real variables as a planar picture. 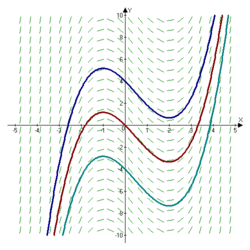 Specifically, for a given pair, a vector with the components is drawn at the point [latex](x,y)[/latex] on the [latex]xy[/latex]-plane. Sometimes, the vector is normalized to make the plot more pleasing to the human eye. A set of pairs [latex](x,y)[/latex] making a rectangular grid is typically used for the drawing. An isocline (a series of lines with the same slope) is often used to supplement the slope field. In an equation of the form, the isocline is a line in the [latex]xy[/latex]-plane obtained by setting [latex]f(x,y)[/latex] equal to a constant. 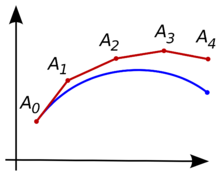 Euler’s Method: Illustration of the Euler method. The unknown curve is in blue and its polygonal approximation is in red.

Take a small step along that tangent line up to a point, [latex]A_1[/latex]. Along this small step, the slope does not change too much [latex]A_1[/latex] will be close to the curve. If we pretend that [latex]A_1[/latex] is still on the curve, the same reasoning we used for the above point, [latex]A_0[/latex], can be applied. After several steps, a polygonal curve is computed. In general, this curve does not diverge too far from the original unknown curve, and the error between the two curves can be made small if the step size is small enough and the interval of computation is finite.

Separable differential equations are equations wherein the variables can be separated.

A separable equation is a differential equation of the following form:

The original equation is separable if this differential equation can be expressed as:

where [latex]c[/latex] is the standard arbitrary constant.

To separate the equations means to move all the [latex]x[/latex] terms and [latex]y[/latex]s terms to the opposite sides of the equation.

A general approach to solving separable equations is as follows:

After simplifying you will have the general form of the equation. A particular solution to the equation will depend on the choice of the arbitrary constants you obtained when integrating.

The final solution can be written as follows:

A logistic equation is a differential equation which can be used to model population growth.

The logistic function is the solution of the following simple first-order non- linear differential equation:

Choosing the constant of integration [latex]e^c = 1[/latex] gives the other well-known form of the definition of the logistic curve:

More quantitatively, as can be seen from the analytical solution, the logistic curve shows early exponential growth for negative [latex]t[/latex], which slows to linear growth of slope [latex]\frac{1}{4}[/latex] near [latex]t = 0[/latex], then approaches [latex]y = 1[/latex] with an exponentially decaying gap.

The logistic equation is commonly applied as a model of population growth, where the rate of reproduction is proportional to both the existing population and the amount of available resources, all else being equal. The equation describes the self-limiting growth of a biological population.

where the constant [latex]r[/latex] defines the growth rate and [latex]K[/latex] is the carrying capacity. In the equation, the early, unimpeded growth rate is modeled by the first term [latex]rP[/latex]. The value of the rate [latex]r[/latex] represents the proportional increase of the population [latex]P[/latex] in one unit of time. Later, as the population grows, the second term, which multiplied out is [latex]\frac{−rP^2}{K}[/latex], becomes larger than the first as some members of the population [latex]P[/latex] interfere with each other by competing for some critical resource, such as food or living space. This antagonistic effect is called the bottleneck, and is modeled by the value of the parameter [latex]K[/latex]. The competition diminishes the combined growth rate, until the value of [latex]P[/latex] ceases to grow (this is called maturity of the population).

Logistic Curve: The standard logistic curve. It can be used to model population growth because of the limiting effect scarcity has on the growth rate. This is represented by the ceiling past which the function ceases to grow.

Linear equations are equations of a single variable.

Write an expression for a linear differential equation

A linear equation is an algebraic equation in which each term is either a constant or the product of a constant and a single variable.

A common form of a linear equation in the two variables [latex]x[/latex] and [latex]y[/latex] is:

where [latex]m[/latex] and [latex]b[/latex] designate constants. The origin of the name “linear” comes from the fact that the set of solutions of such an equation forms a straight line in the plane. In this particular equation, the constant [latex]m[/latex] determines the slope or gradient of that line, and the constant term [latex]b[/latex] determines the point at which the line crosses the [latex]y[/latex]-axis, otherwise known as the [latex]y[/latex]-intercept.

Since terms of linear equations cannot contain products of distinct or equal variables, nor any power (other than [latex]1[/latex]) or other function of a variable, equations involving terms such as [latex]xy[/latex], [latex]x^2[/latex], [latex]y^{\frac{1}{3}}[/latex], and [latex]\sin x[/latex] are nonlinear.

Linear equations can be written in parametric form:

The parametric form of a linear equation involves two simultaneous equations in terms of a variable parameter [latex]t[/latex], with the following values:

where the differential operator [latex]L[/latex] is a linear operator, [latex]y[/latex] is the unknown function (such as a function of time [latex]y(t)[/latex]), and [latex]f[/latex] is a given function of the same nature as y (called the source term). For a function dependent on time, we may write the equation more expressly as:

The relationship between predators and their prey can be modeled by a set of differential equations.

The predator–prey equations are a pair of first-order, non-linear, differential equations frequently used to describe the dynamics of biological systems in which two species interact, one a predator and one its prey.

They evolve in time according to the pair of equations:

The model makes a number of assumptions about the environment and evolution of the predator and prey populations:

The prey are assumed to have an unlimited food supply, and to reproduce exponentially unless subject to predation; this exponential growth is represented in the equation above by the term [latex]\alpha x[/latex]. The rate of predation upon the prey is assumed to be proportional to the rate at which the predators and the prey meet; this is represented above by [latex]\beta xy[/latex]. If either [latex]x[/latex] or [latex]y[/latex] is zero, then there can be no predation. With these two terms, the equation above can be interpreted as follows: the change in the prey’s number is given by its own growth minus the rate at which it is preyed upon.

The equations have periodic solutions and do not have a simple expression in terms of the usual trigonometric functions. They can only be solved numerically. However, a linearization of the equations yields a solution similar to simple harmonic motion with the population of predators following that of prey by 90 degrees.