A vector function covers a set of multidimensional vectors at the intersection of the domains of [latex]f[/latex], [latex]g[/latex], and [latex]h[/latex].

What is a Vector Valued Function?

where [latex]t[/latex] is being used as the variable. This is a three dimensional vector valued function. The graph shows a visual representation of 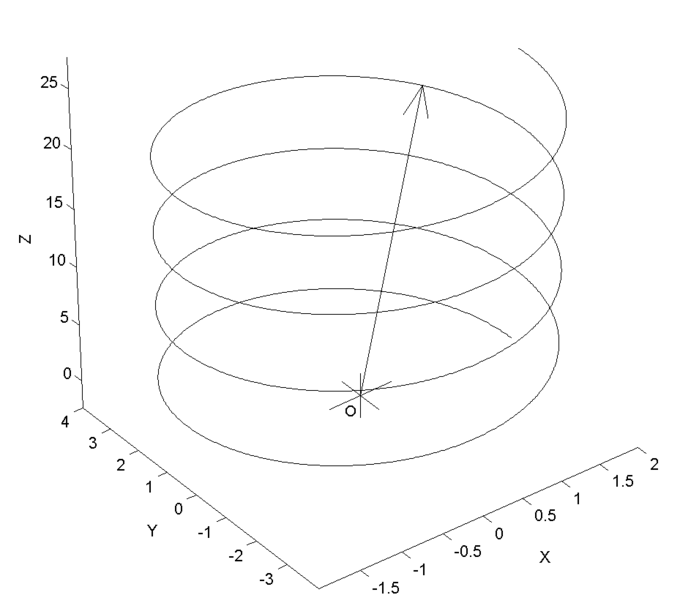 This can be broken down into three separate functions called component functions:

If you were to take a cross section, with the cut perpendicular to any of the three axes, you would see the graph of that function. For example, if you were to slice the three-dimensional shape perpendicular to the [latex]z[/latex]-axis, the graph you would see would be of the function [latex]z(t)=t[/latex].The domain of a vector valued function is a domain that satisfies all of the component functions. It can be found by taking the intersection of the individual component function domains. The vector valued functions can be manipulated in the same way as a vector; they can be added, subtracted, and the dot product and the cross product can be found.

For this example, we will use time as our parameter. The following vector valued function represents time, [latex]t[/latex]:

This function is representing a position. Therefore, if we take the derivative of this function, we will get the velocity:

If we differentiate a second time, we will be left with acceleration:

Arc length and speed are, respectively, a function of position and its derivative with respect to time.

Distinguish the arc length and speed

Since length is a magnitude that involves position, it is easy to deduce that the derivative of a length, or position, will give you the velocity —also known as speed—of a function. This is because a derivative gives you a rate of change with respect to a parameter. Velocity is the rate of change of a position with respect to time. Let’s start this atom by looking at arc length with calculus.

The arc length is the length you would get if you took a curve, straightened it out, and then measured the length of that line. The arc length can be found using geometry, but for the sake of this atom, we are going to use integration. The arc length is approximated by connecting a finite number of points along and curve, connecting those lines to create a a string of very small straight lines, and adding them together. To find this using integration, we should start out by using the Pythagorean Theorem for length of the different sides of a triangle:

Since this is a function of position and is defined by x, we need to have a derivative that is in respect to x: 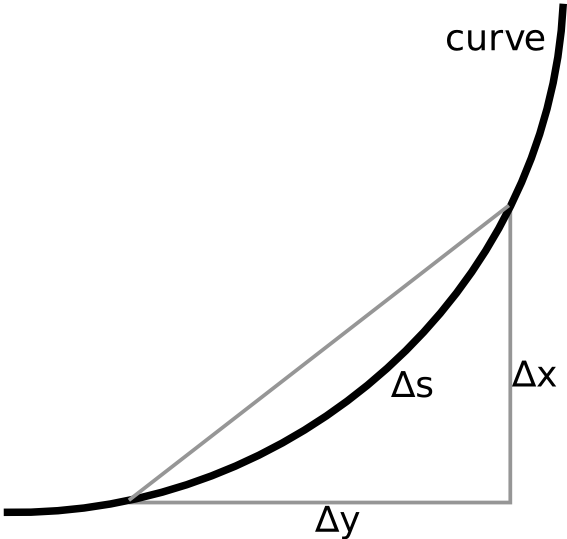 Arc Length: The arc length is the equivalent of taking a curve, straightening it out, and then measuring it, as seen in this animation.

Now that the hard part is over, we can easily find the speed along this curve. Since speed is in relation to time and not position, we need to revert back to the arc length with respect to time:

Then, differentiate with respect to time:

A vector function is a function that can behave as a group of individual vectors and can perform differential and integral operations.

Discuss how vector functions are manipulated

Vector functions can also be referred to in a different notation: 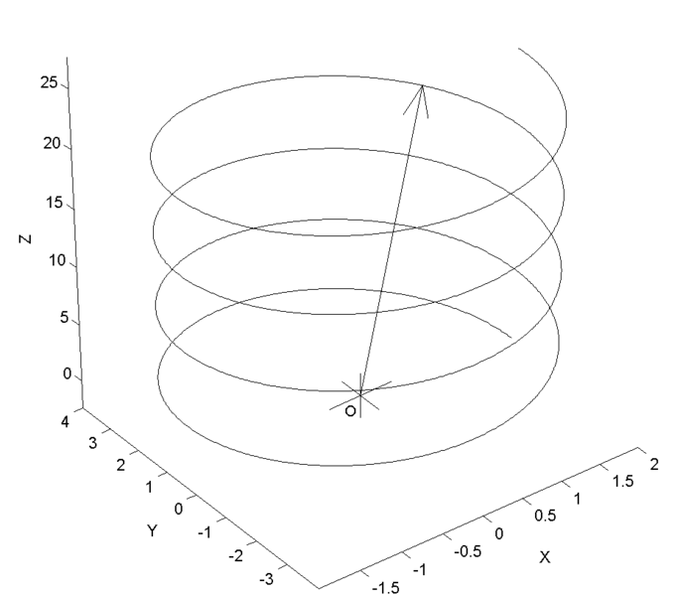 Vector calculus is a branch of mathematics that covers differentiation and integration of vector fields in any number of dimensions. Because vector functions behave like individual vectors, you can manipulate them the same way you can a vector. Vector calculus is used extensively throughout physics and engineering, mostly with regard to electromagnetic fields, gravitational fields, and fluid flow. When taking the derivative of a vector function, the function should be treated as a group of individual functions.

The curvature of an object is the degree to which it deviates from being flat and can be found using arc length. 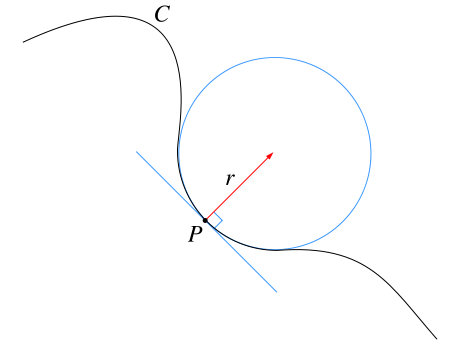 In order to find the value of the curvature, we need to take the parameter time, s, and the unit tangent vector, which in this case is the same as the unit velocity vector, T, which is also a function of time.The curvature is a magnitude of the rate of change of the tangent vector, T:

Where [latex]\kappa[/latex] is the curvature and [latex]\frac{dT}{ds}[/latex] is the acceleration vector (the rate of change of the velocity vector over time).

How Does This Relate to Arc Length?

The curvature can also be approximated using limits. Given the points P and Q on the curve, lets call the arc length s(P,Q), and the linear distance from P to Q will be denoted as d(P,Q). The curvature of the arc at point P can be found by obtaining the limit:

In order to use this formula, you must first obtain the arc length of the curve from points P to Q and length of the linear segment that connect points P and Q. In a previous atom, we went into more detail on how to find the arc length, but for the sake of this atom we will just restate those formulas:In Cartesian coordinates:

Planetary Motion According to Kepler and Newton

Kepler explained that the planets move in an ellipse around the Sun, which is at one of the two foci of the ellipse.

Johannes Kepler describes planetary motion with three laws: 1. The orbit of every planet is in an elliptical shape, with the Sun being at one of the two foci of this ellipse, called the occupied focus; 2. If a line where to be drawn from the planet to the Sun, that line would sweep out an equal amount of area during equal intervals of time; 3. The square of the orbital period is proportional to the cube of the semi-major axis of the planet’s orbit.

As we already stated, the first law of planetary motion states that the orbit of every planet is an ellipse with the Sun at one focus. In order to discuss this law, and the laws that follow, we should examine the components of an ellipse a bit more closely.

The semi-major axis, [latex]a[/latex], can be found as follows:

The semi-minor axis, [latex]b[/latex], can be found as follows:

The area of an ellipse is found as follows: 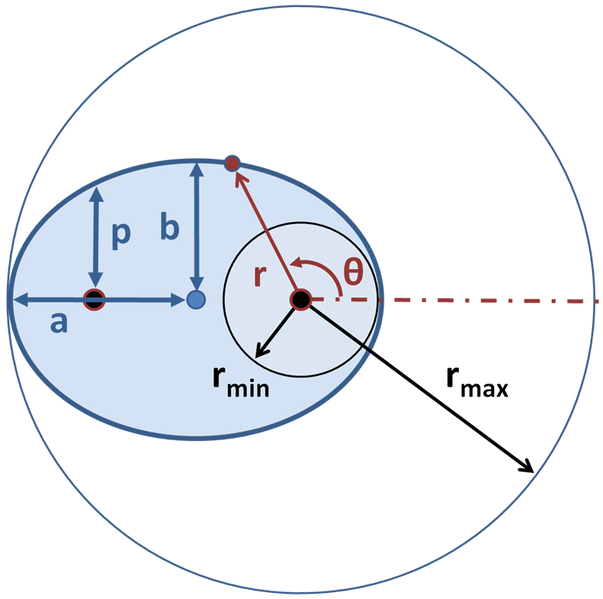 The second law of planetary motion states that in an amount of time, [latex]t[/latex], a line from the planet to the Sun will sweep out a triangle having a base of [latex]r[/latex] and a height of [latex]r \cdot d\theta[/latex]. Therefore, the area of this triangle is:

and the ratio of the area of this triangle to the time elapsed is:

As the planet moves closer to the Sun, it speeds up. This allows the triangle to have an equal area in an equal amount of time regardless of position of the planet. As we learned in the first section, the area of an ellipse is [latex]\pi \cdot a \cdot b[/latex]. Therefore, the period ([latex]P[/latex]) of the ellipse satisfies:

The Second Law: Illustration of Kepler’s second law. The planet moves faster near the Sun so that the same area is swept out in a given time as it would be at larger distances, where the planet moves more slowly. The green arrow represents the planet’s velocity, and the purple arrows represent the force on the planet.

Kepler’s third law describes the relationship between the distance of the planets from the Sun, and their orbits period. [latex]P^2 \propto a^3[/latex], with a constant of proportionality of:

where AU is an astronomical unit. In the case of a circular orbit, the proportionality constant is as follows:

How does Newton Relate to Kepler?

A vector is normal to another vector if the intersection of the two form a 90-degree angle at the tangent point.

In order for a vector to be normal to an object or vector, it must be perpendicular with the directional vector of the tangent point. The intersection formed by the two objects must be a right angle.

An object is normal to another object if it is perpendicular to the point of reference. That means that the intersection of the two objects forms a right angle. Usually, these vectors are denoted as [latex]\mathbf{n}[/latex]. 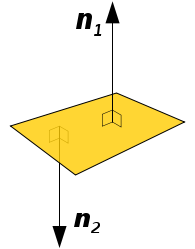 Figure 1: Normal Vector: These vectors are normal to the plane because the intersection between them and the plane makes a right angle.

Not only can vectors be ‘normal’ to objects, but planes can also be normal. 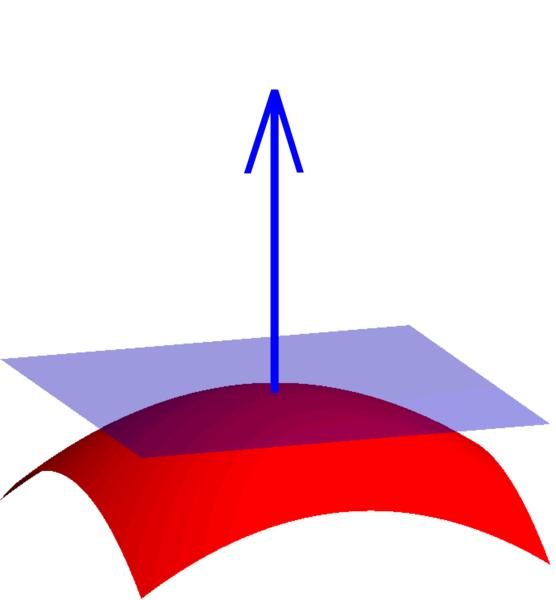 As we covered in another atom, one of the manipulations of vectors is called the Dot Product. When you take the dot product of two vectors, your answer is in the form of a single value, not a vector. In order for two vectors to be normal to each other, the dot product has to be zero.

Tangent vectors are almost exactly like normal vectors, except they are tangent instead of normal to the other vector or object. These vectors can be found by obtaining the derivative of the reference vector, [latex]\mathbf{r}(t)[/latex]: