Alkenes and alkynes are named similarly to alkanes, based on the longest chain that contains the double or triple bond.

Identifying and Numbering the Longest Chain

Alkene and alkyne compounds are named by identifying the longest carbon chain that contains both carbons of the double or triple bond. This longest chain is named by the alkane series convention: “eth-” for two carbons; “prop-” for three carbons; “but-” for four carbons; etc. The carbon backbone is numbered from the end that yields the lowest positioning for the double or triple bond.

Substituents are added to the name as prefixes to the longest chain. Rotation is restricted around the double bond, so prefixes can be added to differentiate stereoisomers. Cis or trans is used to indicate whether higher priority substituents are located on the same or opposite sides of the bond. If the compound is cyclic, this information is noted by adding the “cyclo-” prefix.

Naming hexene with different substituents: Examples of substituted hex-1-enes. Remember that the 1 could go in front of the word hexene as well. For example, the middle molecule could be named as 4-methyl-1-hexene.

For multiple double or triple bonds, “di-,” “tri-,” or “tetra-” can be added prior to the “-ene” or “-yne.” In these cases, an extra “a” is appended to the end of the name of the alkyl chain, like in the case of butadiene. For compounds containing both double and triple bonds, the “-ene” suffix precedes the “-yne,” and the compound is numbered to minimize the bond positions.

Due to the presence of a double bond in their carbon skeletons, alkenes are more reactive than their related alkanes.

Recognize the properties of alkenes relative to alkanes 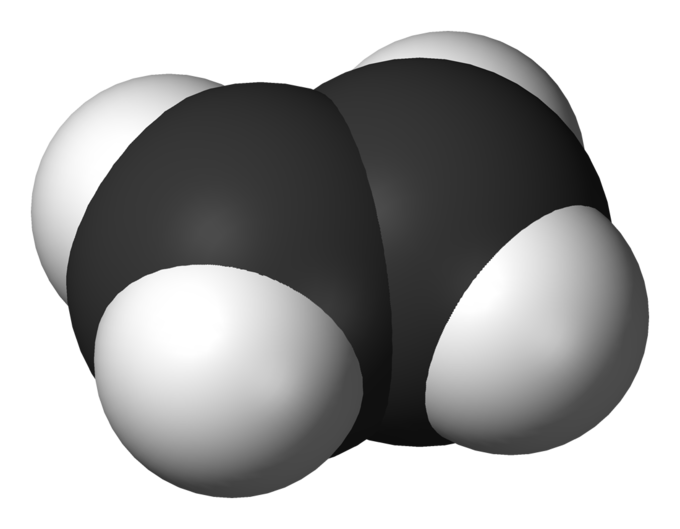 Ethylene: A space-filling model of ethylene, the simplest alkene, showing its planar structure.

Alkenes contain a double bond that is composed of one sigma and one pi bond between two carbon atoms. The sigma bond has similar properties to those found in alkanes, while the pi bond is more reactive. The carbon atoms in the double bond are sp2 hybridized, forming a planar structure. Rotation around the double bond is disfavored, so alkenes form fairly stable isomers depending on the positioning of substituents on the same (cis) or opposite (trans) sides of the double bond. These isomers are called diastereoisomers. 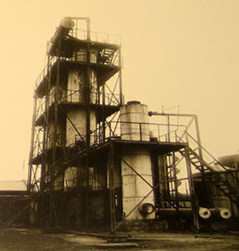 Thermal cracking: The factory of the Shukhov cracking process by the great Russian engineer and scientist Vladimir Shukhov (1853-1939) in 1934. In petroleum geology and chemistry, thermal cracking is the process whereby complex organic molecules such as kerogens or heavy hydrocarbons are broken down into simpler molecules such as light hydrocarbons, by the breaking of carbon-carbon bonds in the precursors.

The melting and boiling points of alkenes are determined by the regularity of the packing, or the closeness, of these molecules. Alkene isomers that can achieve more regular packing have higher melting and boiling points than molecules with the same molecular formula but weaker dispersion forces. Alkenes are non-polar, and they are both immiscible in water and less dense than water. They are generally soluble in organic solvents. In addition, they do not conduct electricity.

Alkenes are more reactive than their related alkanes due to the relative instability of the double bond. They are more likely to participate in a variety of reactions, including combustion, addition, hydrogenation, and halogenation reactions. Alkenes can also be reacted, typically in the presence of a catalyst, to form polymers.

Large amounts of ethylene are produced from natural gas via thermal cracking. It is an important raw material for the synthesis of a number of plastics.

Reactions of Alkenes and Alkynes

Alkenes and alkynes are more reactive than alkanes due to their pi bonds.

Give examples of the various reactions that alkenes and alkynes undergo

Reactions of Alkenes and Alkynes

Alkenes and alkynes are generally more reactive than alkanes due to the electron density available in their pi bonds. In particular, these molecules can participate in a variety of addition reactions and can be used in polymer formation.

Unsaturated hydrocarbons can participate in a number of different addition reactions across their double or triple bonds.

Alkenes undergo diverse cycloaddition reactions. Most notable is the Diels–Alder reaction with 1,3-dienes to give cyclohexenes.

Diels-Alder reaction: Here, the reaction of 1,3-butadiene (the diene) reacts with ethylene (the dienophile) to produce cyclohexene.

This general reaction has been extensively developed, and electrophilic alkenes and alkynes are especially effective dienophiles. Cycloaddition processes involving alkynes are often catalyzed by metals.

Oxidation of alkynes by strong oxidizing agents such as potassium permanganate or ozone will yield a pair of carboxylic acids. The general reaction can be pictured as:

By contrast, alkenes can be oxidized at low temperatures to form glycols. At higher temperatures, the glycol will further oxidize to yield a ketone and a carboxylic acid:

Here, we have 3-methyl-2-butene oxidizing to form acetone and acetic acid.

In the presence of a catalyst—typically platinum, palladium, nickel, or rhodium—hydrogen can be added across a triple or a double bond to take an alkyne to an alkene or an alkene to an alkane. In practice, it is difficult to isolate the alkene product of this reaction, though a poisoned catalyst—a catalyst with fewer available reactive sites—can be used to do so. As the hydrogen is immobilized on the surface of the catalyst, the triple or double bonds are hydrogenated in a syn fashion; that is to say, the hydrogen atoms add to the same side of the molecule.

Alkenes and alkynes can react with hydrogen halides like HCl and HBr. Hydrohalogenation gives the corresponding vinyl halides or alkyl dihalides, depending on the number of HX equivalents added. The addition of water to alkynes is a related reaction, except the initial enol intermediate converts to the ketone or aldehyde. If the alkene is asymmetric, the reaction will follow Markovnikov’s rule—the halide will be added to the carbon with more alkyl substituents.

Water can be added across triple bonds in alkynes to yield aldehydes and ketones for terminal and internal alkynes, respectively. Hydration of alkenes via oxymercuration produces alcohols. This reaction takes place during the treatment of alkenes with a strong acid as the catalyst.