Aromatic compounds are named based on the number and type of substituents on the ring.

Recognize the methods for naming aromatic compounds, including IUPAC nomenclature and historical names

Aromatic compounds are ring structures with unusual stability due to delocalized pi electron density that is shared between all of the carbon atoms in the ring.

Naming aromatic compounds: This nomenclature tutorial video takes you through the IUPAC rules for benzene type molecules and includes the common names for substituted benzene.

Aromatic Compounds with a Single Substituent

When there is a single substituent on a benzene ring and the substituent contains six or fewer carbons, the substituent is included as a prefix to benzene. Alkyl groups are named according to the alkane series convention ending with -yl: methyl (for a single carbon), ethyl (for two carbons), propyl (for three carbons), etc.

If the substituent contains more than six carbons, the alkane portion is named first, and the aromatic ring portion is added as a suffix. For instance, an aromatic ring bonded to an 8-carbon chain would be 1-phenyloctane, and not octylbenzene.

When there are multiple substituents, ring atoms are numbered to minimize the numbers assigned to the substituted positions.

Aromatic compounds, originally named because of their fragrant properties, are unsaturated hydrocarbon ring structures that exhibit special properties, including unusual stability, due to their aromaticity. They are often represented as resonance structures containing single and double bonds. However, the bonding is stronger than expected for a conjugated structure, and it is more accurately depicted as delocalized electron density shared between all the atoms in the ring. 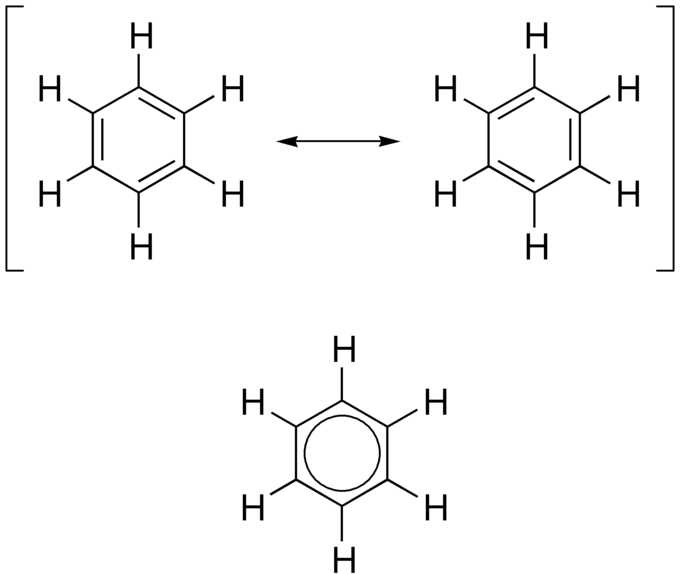 Benzene: Benzene can only be fully depicted with all of its resonance structures, which show how its pi-electrons are delocalized throughout its six-carbon ring. This delocalization leads to a lower overall energy for the molecule, giving it greater stability.

Electrophilic Aromatic Substitution: The electron-rich benzene makes a bond with an electron-deficient chemical species (E+, the electrophile) which takes the place of an H-atom in the original structure. The reaction preserves the pi system of electrons and therefore the aromatic character of the benzene ring.

The double bonds in aromatic compounds are less likely to participate in addition reactions than those found in typical alkenes. Instead, cyclic aromatic compounds undergo electrophilic substitution reactions (reactions in which the ring acts as an nucleophile to a suitable electrophile). When benzene participates in such substitution reactions, the product retains the stability associated with the aromatic [latex]\pi[/latex] electron system. This stability is lost in electrophilic addition because the product is not aromatic.

Aromatic compounds are produced from a variety of sources, including petroleum and coal tar. Poly-aromatic hydrocarbons are components of atmospheric pollution and are known carcinogens. Aromatic compounds are also interesting because of their presumed role in the origin of life as precursors to nucleotides and amino acids.

Aromatic compounds can participate in a range of reactions including substitution, coupling, and hydrogenation reactions.

The benzene ring is frequently noted for the stability it gains from its aromaticity. However, aromatic compounds can participate in a variety of chemical reactions, including a range of substitution, coupling, and hydrogenation reactions. The electrons in the pi system of the benzene ring are responsible for the reactivity observed. While aromatic compounds are best represented by a continuous electron density evenly distributed around the aromatic core, the alternating single and double bonds that are commonly drawn are very useful when predicting the reactivity of aromatic compounds. Many reactions common to alkenes (carbon-carbon double bonds) also function in a similar fashion with the “double bonds” in aromatic compounds, though generally the activation barrier is higher due to the stabilizing force of aromaticity (ca. 36 kcal/mol).

An example of an aromatic substitution reaction is shown below. In the presence of strong sulfuric and nitric acid, a nitro group can be added to the ring.

In a nucleophilic aromatic substitution reaction, a nucleophile displaces a substituent on an aromatic ring. The replaced species is typically a good leaving group, like nitrogen gas or a halide ion. The presence of an electron-withdrawing group on the ring can speed up the progress of this class of reactions. Chemically, this is similar to an addition reaction to a Michael acceptor or other electron-deficient, unsaturated system, followed by an elimination reaction.

Electrophilic aromatic substitution (EAS): This reaction mechanism takes place from bottom to top. EAS occurs ortho or para to electron donating groups, such as amines, due to the stabilization of the intermediate positive charge. The four structures drawn in the middle of the diagram are all resonance structures. Due to the electrons provided by the NH2 group, this intermediate is stabilized, and the para-substitution is favored. As an exercise, draw out the stabilization of the positive charge when ortho substitution occurs.

In an electrophilic aromatic substitution reaction, a substituent on an aromatic ring is displaced by an electrophile. These reactions include aromatic nitration, aromatic halogenation, aromatic sulfonation, and Friedel-Crafts acylations and alkylations. These reactions can involve a resonance-stabilized carbocation intermediate known as a sigma complex. The reactivity can be thought of in terms of an alkene attacking a cationic species, such as in the first step of an acid-catalyzed hydration of an alkene.

A number of patterns have been observed regarding the reaction of substituted benzene rings. These observations have been generalized to provide a predictive rule for electrophilic aromatic substitutions. It states that an electron-donating substituent generally accelerates substitution and directs reactivity toward the positions that are ortho and para to it on the ring, while an electron-withdrawing substituent will slow reaction progress and favor the meta position on the ring.

Coupling reactions are reactions involving a metal catalyst that can result in the formation of a carbon-carbon bond between two radicals.

Hydrogenation can be used to create a fully saturated ring system. This is similar to the hydrogenation of an alkene to form an alkane, albeit more difficult due to the stability of the aromatic system.