Bond energy is the measure of bond strength. In order to turn one mole of a molecule into its constituent atoms, an amount of heat equal to the bond energy needs to be put into the system.

Identify the relationship between bond energy and strength of chemical bonds

The Energy Associated with a Chemical Bond

Bond energy is a measure of a chemical bond ‘s strength, meaning that it tells us how likely a pair of atoms is to remain bonded in the presence of energy perturbations. Alternatively, it can be thought of as a measure of the stability gained when two atoms bond to each other, as opposed to their free or unbound states.

Bond energy is determined by measuring the heat required to break one mole of molecules into their individual atoms, and it represents the average energy associated with breaking the individual bonds of a molecule. The higher the bond energy, the ‘stronger’ we say the bond is between the two atoms, and the distance between them (bond length) is smaller.

For instance, the HO-H bond in a water molecule requires 493 kJ/mol to break and generate the hydroxide ion (OH–). Breaking the O-H bond in the hydroxide ion requires an additional 424 kJ/mol. Therefore, the bond energy of the covalent O-H bonds in water is reported to be the average of the two values, or 458.9 kJ/mol. These energy values (493 and 424 kJ/mol) required to break successive O-H bonds in the water molecule are called ‘ bond dissociation energies,’ and they are different from the bond energy. The bond energy is the average of the bond dissociation energies in a molecule.

The exact properties of a specific kind of bond are determined in part by the nature of the other bonds in the molecule; for example, the energy and length of the C–H bond will vary depending on what other atoms are bonded to the carbon atom. Similarly, the C-H bond length can vary by as much as 4% between different molecules. For this reason, the values listed in tables of bond energy and bond length are usually averages taken over a variety of compounds that contain a specific atom pair.

Energy Between Two Atoms as a Function of Internuclear Distance

A Morse curve shows how the energy of a two atom system changes as a function of internuclear distance. 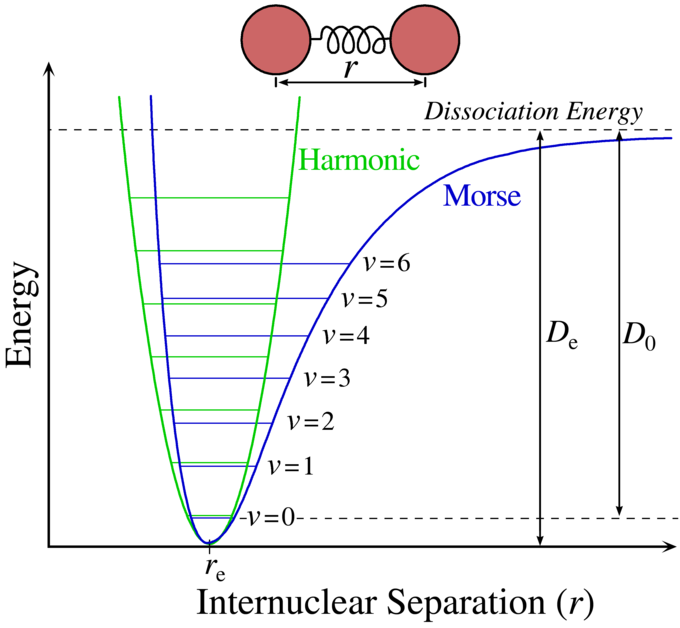 Morse curve: Plot of potential energy vs distance between two atoms. The bond energy is energy that must be added from the minimum of the ‘potential energy well’ to the point of zero energy, which represents the two atoms being infinitely far apart, or, practically speaking, not bonded to each other.

At large distances, the energy is zero, meaning that there is no interaction. This agrees with our understanding that two atoms placed infinitely far apart do not interact with each other in any meaningful way, or at the very least we can say that they are not bonded to each other. At internuclear distances in the order of an atomic diameter, attractive forces dominate. At very small distances between the two atoms, the force is repulsive and the energy of the two atom system is very high. The attractive and repulsive forces are balanced at the minimum point in the plot of a Morse curve.

The internuclear distance at which the energy minimum occurs defines the equilibrium bond length. This bond length represents an ‘equilibrium’ value because thermal motion causes the two atoms to vibrate about this distance, much like a spring vibrates back and forth around its unstretched, or equilibrium distance.

A Morse curve will have different energy minima and distance dependence for bonds formed between different pairs of atoms. In general, the stronger the bond between two atoms, the lower the energy minimum is and the smaller the bond length.

The bond energy is the amount of work that must be done to pull two atoms completely apart; in other words, it is the same as the depth of the “well” in the potential energy curve.

Bond enthalpy is defined as the enthalpy change when a covalent bond is cleaved by homolysis.

Energy Transfer During Breaking or Formation of Bonds

Enthalpy is a measure of the total heat energy content in a thermodynamic system, and it is practically used to describe energy transfer during chemical or physical processes in which the pressure remains constant.

The total enthalpy, H, of a system cannot be measured directly. Thus, the change in enthalpy, [latex]\Delta H[/latex], is a more useful quantity than its absolute value. The change ([latex]\Delta H[/latex]) is positive in endothermic reactions because the products of the reaction have a greater enthalpy than the reactants, and heat is absorbed by the system from its surroundings. The change in enthalpy is negative in exothermic processes, because energy is released from the system into its surroundings.

Bond enthalpy, also known as bond dissociation energy, is defined as the standard enthalpy change when a bond is cleaved by homolysis, with reactants and products of the homolysis reaction at 0 K (absolute zero).

Homolysis of a chemical bond: A two-electron covalent bond is equally split when bond breaking, with each resulting fragment having one electron from the original shared pair. Notice that the products are free-radicals.

For instance, the bond enthalpy, or bond-dissociation energy, for one of the C-H bonds in ethane (C2H6) is defined by the process:

The strength of bonds between different atoms varies across the periodic table and is well documented. 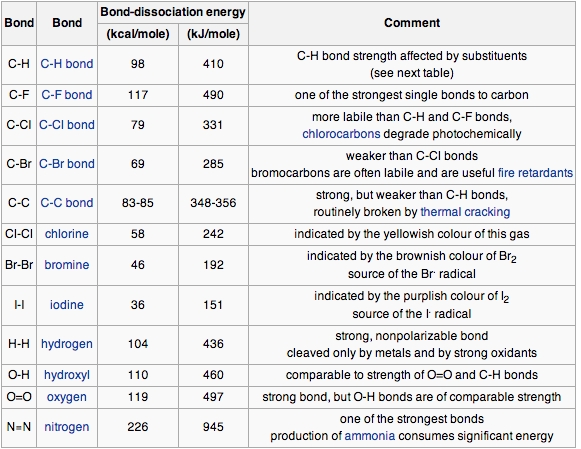 Bond length between two atoms depends on factors such as the orbital hybridization and the electronic nature of the components.

The Distance Between Two Bonded Atoms

The distance between two atoms participating in a bond, known as the bond length, can be determined experimentally. X-ray diffraction of molecular crystals allows for the determination of the three-dimensional structure of molecules and the precise measurement of internuclear distances. Various spectroscopic methods also exist for estimating the bond length between two atoms in a molecule.

Bonds Are Not Static Structures

The bond length is the average distance between the nuclei of two bonded atoms in a molecule. This is because a chemical bond is not a static structure, but the two atoms actually vibrate due to thermal energy available in the surroundings at any non-zero Kelvin temperature. A bond can be modeled as two balls connected by a spring: stretching or compressing the spring initiates a back-and-forth motion with respect to the equilibrium positions of the balls. Measured bond lengths are the distance between those unperturbed, or equilibrium, positions of the balls, or atoms.

Ball-and-spring model of a chemical bond: A bond between two atoms can be thought of as a spring with two balls attached to it. Any stretch or compression of the spring will initiate oscillations of the atoms with respect to their equilibrium (unperturbed) positions. The potential energy function for this system is also indicated. The minimum energy occurs at the equilibrium distance r0, which is where the bond length is measured.

Bond lengths have traditionally been expressed in Ångstrom units, but picometers are sometimes preferred (1 Å = 10-10 m = 100 pm). Bonds lengths are typically in the range of 1-2 Å, or 100-200 pm. Even though the bond vibrates, equilibrium bond lengths can be determined experimentally to within ±1 pm. The actual distance between two atoms in a molecule depends on factors such as the orbital hybridization and the electronic nature of its components.

Generally, when we consider a bond between a given atom and a varying atomic bonding partner, the bond length decreases across a period in the periodic table, and increases down a group. This trend is identical to that of the atomic radius.