Boron is produced by cosmic ray spallation, is a metalloid, and is essential to life.

Review the properties and uses of elemental boron.

Boron is a chemical element with the chemical symbol B and atomic number 5. Boron is produced entirely by cosmic ray spallation (as a result of nuclear reactions), and not by stellar nucleosynthesis (not within stars as a result of fusion or supernovae). As a result, it is a low-abundance element in both the solar system and the Earth’s crust. Natural boron is composed of two stable isotopes: 11B is more abundant than 10B, which has a number of uses as a neutron-capturing agent. Several allotropes of boron exist. Amorphous boron is a brown powder, while crystalline boron is black, extremely hard (about 9.5 on the Mohs scale), and a poor conductor at room temperature. Elemental boron is used as a dopant in the semiconductor industry.

Elemental boron is rare and poorly studied because the material is extremely difficult to prepare. Most studies on “boron” involve samples that contain small amounts of carbon. Chemically, boron behaves more similarly to silicon than to aluminum. Crystalline boron is chemically inert and resistant to attack from boiling hydrofluoric or hydrochloric acid. When finely divided, it can be attacked slowly by hot, concentrated hydrogen peroxide or nitric acid; hot sulfuric acid; or a hot mixture of sulfuric and chromic acids.

On Earth, boron is concentrated by the water-solubility of its more common naturally-occurring compounds, the borate minerals. These are mined industrially as evaporites, such as borax and kernite. Chemically uncombined boron, which is classified as a metalloid, is not found naturally on Earth. Industrially, very pure boron can be produced, but this is difficult, because boron tends to form refractory materials that contain small amounts of carbon or other elements. 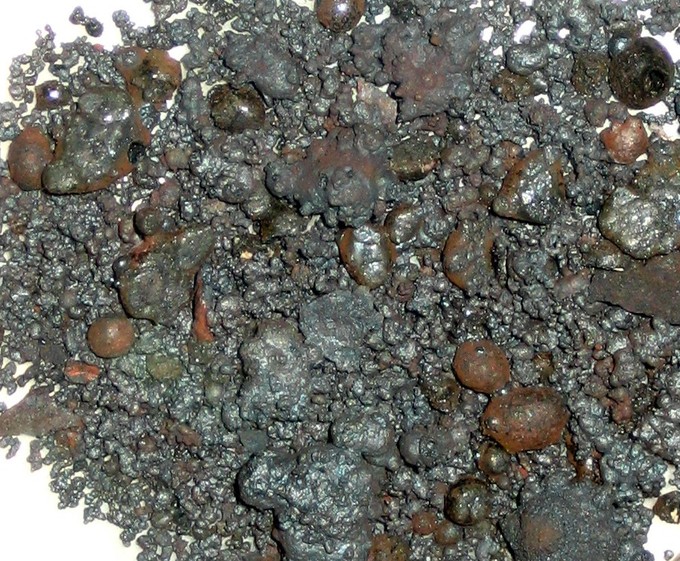 Boron: Boron has a black-brown appearance.

Boron is essential to life, although its exact physiological role in animals is not well-established. Small amounts of boron compounds play a role strengthening the cell walls of all plants, thus making boron necessary in soils. Experiments indicate a role for boron as an ultratrace element in animals. Deficiency of boron in rats has been shown to result in poor coat or hair quality.

Borates have low toxicity for mammals (similar to table salt), but are more toxic to arthropods and have been used as insecticides. Boric acid is mildly antimicrobial, and a natural, boron-containing, organic antibiotic does exist.

Some signaling compounds of boron which are used for bacterial cell to cell communication (known as “quorum sensing”) have been discovered recently. This signaling system is used as a response to the local population density of bacterial cells, and mediates processes such as biofilm formation, virulence, and antibiotic resistance. A known example of a boron-containing quorum sensing signaling molecule is Autoinducer-2 (AI-2). 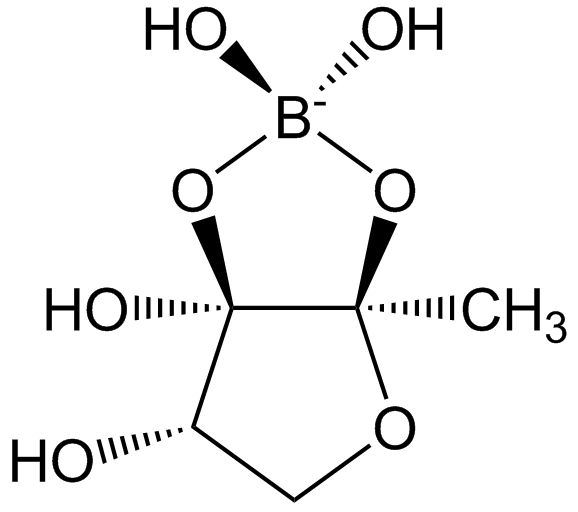 Autoinducer-2: Autoinducer-2 (AI-2) is one of the few known biomolecules containing the element Boron. AI-2 is used by many types of bacteria as a signaling molecule mediating quorum sensing.

When in a compound with halides, boron has the formal oxidation state +3. Trihalides adopt a planar trigonal structure and are Lewis acids.

Discuss the properties of trihalides

Boron undergoes halogenation to form trihalides with the molecular structure BX3, as in the following:

In its most familiar compounds, boron has the formal oxidation state III, or +3. These include oxides, sulfides, nitrides, and halides. The trihalides form planar trigonal structures and are Lewis acids because they readily form adducts with electron -pair donors, which are called Lewis bases. For example, fluoride (F–) and boron trifluoride (BF3) combine to give the tetrafluoroborate anion, BF4–. Boron trifluoride is used in the petrochemical industry as a catalyst.

The halides react with water to form boric acid:

All three lighter boron trihalides, BX3 (X = F, Cl, Br), form stable adducts with common Lewis bases. Their relative Lewis acidities can be evaluated in terms of the relative exothermicities of the adduct-forming reaction. Such measurements have revealed the following sequence for the Lewis acidity: BF3 < BCl3 < BBr3 (in other words, BBr3 is the strongest Lewis acid).

This trend is commonly attributed to the degree of π-bonding in the planar boron trihalide that would be lost upon pyramidalization (the conversion of the trigonal planar geometry to a tetrahedral one) of the BX3 molecule, which follows this trend: BF3 > BCl3 > BBr3 (that is, BBr3 is the most easily pyramidalized). The criteria for evaluating the relative strength of π-bonding are not clear, however. One suggestion is that the F atom is small compared to the larger Cl and Br atoms, and the lone pair electron in the 2pz orbital of F is readily and easily donated, and overlaps with the empty 2pz orbital of boron. As a result, the [latex]\pi[/latex] donation of F is greater than that of Cl or Br. In an alternative explanation, the low Lewis acidity for BF3 is attributed to the relative weakness of the bond in the adducts F3B-L. 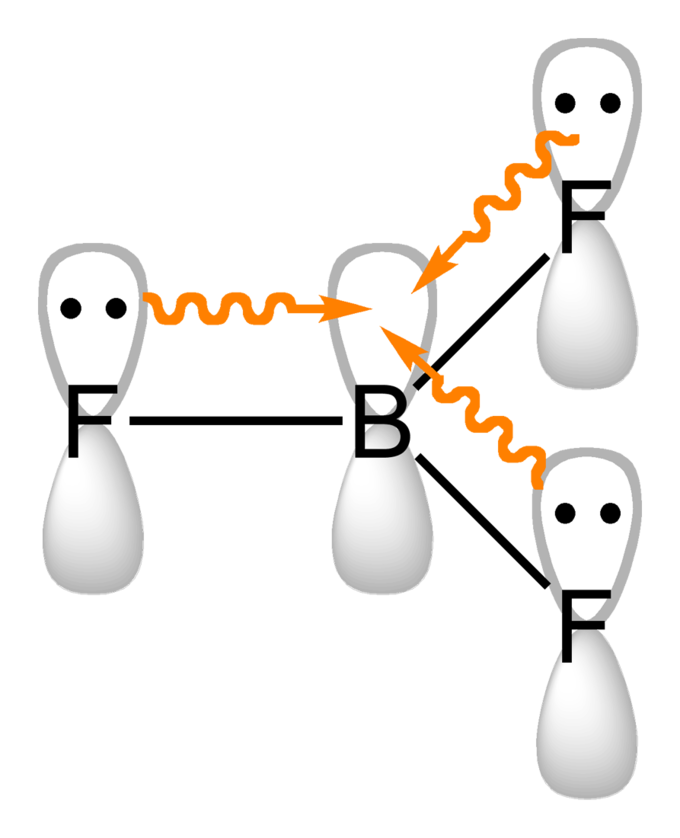 Boron tribromide (BBr3) is a colorless, fuming liquid compound that contains boron and bromine. The reaction of boron carbide with bromine at temperatures above 300 °C leads to the formation of boron tribromide. The product can be purified by vacuum distillation.

BBr3 is decomposed by water and alcohols. It is an excellent demethylating or dealkylating agent for the cleavage of ethers, also with subsequent cyclization (formation of cyclic molecules), often in the production of pharmaceuticals. The mechanism of ether dealkylation proceeds via the formation of a complex between the boron center and the ether oxygen followed by the elimination of an alkyl bromide to yield a dibromo(organo)borane. The dibromo(organo)borane can then undergo hydrolysis to give a hydroxyl group, boric acid, and hydrogen bromide as products. The electronics industry uses boron tribromide as a boron source in pre-deposition processes for doping in the manufacture of semiconductors.

Boron trichloride (BCl3) is a colorless gas that is a valuable reagent in organic synthesis, but is also dangerously reactive. Boron trichloride is produced industrially by direct chlorination of boron oxide and carbon at 500 °C. The synthesis is analogous to the Kroll process for the conversion of titanium dioxide to titanium tetrachloride. In the laboratory, BF3 reacts with AlCl3 to create BCl3 via halogen exchange. Boron trichloride does not form dimers, although there is some evidence that may indicate dimerization at very low temperatures (20 K). NMR studies of mixtures of boron trihalides shows the presence of mixed halides, which may indicate a four center intermediate (that is, a dimer). The absence of dimerization contrasts with the other trihalides of group 13, which contain four or six coordinate metal centers.

Boron trichloride is a starting material for the production of elemental boron. It is also used in the refining of aluminium, magnesium, zinc, and copper alloys to remove nitrides, carbides, and oxides from molten metal. It has been used as a soldering flux for alloys of aluminium, iron, zinc, tungsten, and monel. Aluminum castings can be improved by treating the melt with boron trichloride vapors.

Boron trifluoride (BF3) is a pungent, colorless, toxic gas that forms white fumes in moist air. The molecule is isoelectronic with the carbonate anion, CO32−. BF3 is commonly referred to as “electron deficient” because of its exothermic reactivity toward Lewis bases. BF3 is manufactured by the reaction of boron oxides with hydrogen fluoride. Since boron trifluoride is corrosive, the metals suitable for handling boron trifluoride include stainless steel, monel, and hastelloy. In the presence of moisture, boron trifluoride corrodes stainless steel. Polytetrafluoroethylene, polychlorotrifluoroethylene, polyvinylidene fluoride, and polypropylene show satisfactory resistance.

Discuss examples of the borate family of compounds.

Borates are the name for a large number of boron-containing oxoanions. The term may also more loosely refer to chemical compounds which contain borate anions. The simplest borate anion, BO33-, has a trigonal planar structure and is analogous to the carbonate anion CO32-, with which it is isoelectronic. Larger borates are composed of trigonal planar BO3 or tetrahedral BO4 structural units, joined together via shared oxygen atoms; these may be cyclic or linear in structure.

Borates are the form in which boron most often occurs in nature, mainly as borate minerals and borosilicates. The incomplete octet means that Borates act as Lewis acids. When a trigonal boron atom accepts a pair of electrons from a Lewis base, it adopts a tetrahedral configuration (sp3), and the octet rule is satisfied. Both trigonal and tetrahedral units can co-exist in a complex borate, such as the anion in borax. 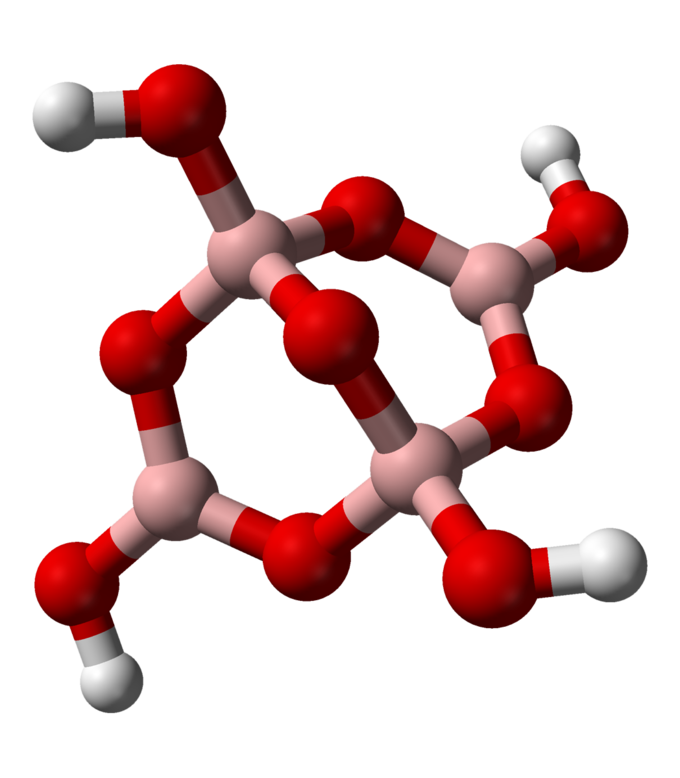 Boron monoxide (B2O) is another chemical compound of boron and oxygen. Two experimental studies have proposed the existence of diamond-like and graphite-like B2O, as for boron nitride and carbon solids. A later, systematic, experimental study of the boron oxide phase diagram suggests that B2O is unstable. The instability of the graphite-like B2O phase was also predicted theoretically.

Boron trioxide (or diboron trioxide) is one of the oxides of boron. It is a white, glassy solid with the formula B2O3. Boron trioxide is produced by treating borax with sulfuric acid in a fusion furnace.

Boron suboxide (chemical formula B6O) is a solid compound containing six boron atoms and one oxygen atom. Due to its short interatomic bond lengths and strongly covalent character, B6O displays a range of outstanding physical and chemical properties such as great hardness (close to that of rhenium diboride and boron nitride), low mass density, high thermal conductivity, high chemical inertness, and excellent wear resistance. B6O can be synthesized by reducing B2O3 with boron or by oxidation of boron with zinc oxide or other oxidants.

Boranes are chemical compounds of boron and hydrogen with general formula BxHy; many readily oxidize on contact with air.

Discuss the composition and properties of boranes.

Boranes are chemical compounds of boron and hydrogen. The boranes comprise a large group of compounds with the generic formula of BxHy. These compounds do not occur in nature. Many of the boranes readily oxidize on contact with air, some violently. The parent member BH3 is called borane, is known only in the gaseous state, and dimerizes to form diborane, B2H6.

The larger boranes all consist of boron clusters that are polyhedral, some of which exist as isomers. For example, isomers of B20H26 are based on the fusion of two 10- atom clusters. The most important boranes are diborane B2H6, pentaborane B5H9, and decaborane B10H14. The development of the chemistry of boron hydrides led to new experimental techniques and theoretical concepts. Boron hydrides have been studied as potential fuels, for rockets, and for automotive uses. 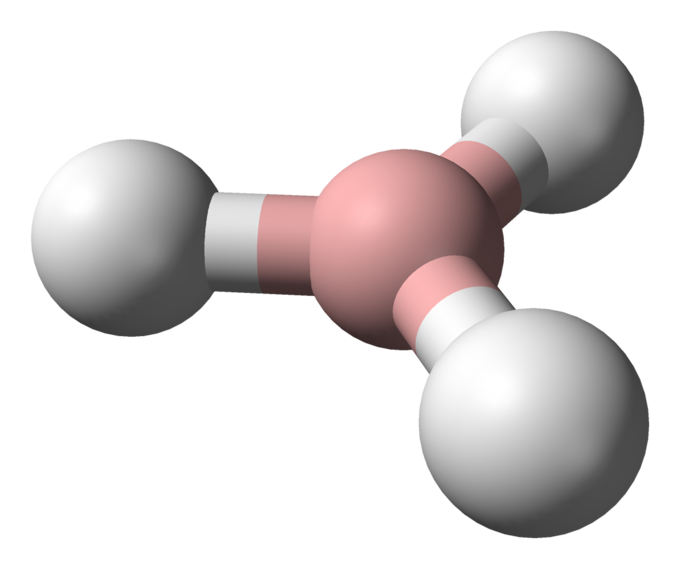 Borane: Ball-and-stick model of borane, BH3, which is highly reactive.

The names for the series of boranes are derived from this general scheme for the cluster geometries:

Boranes are all colorless and diamagnetic. They are reactive compounds and some are pyrophoric. The majority are highly poisonous and require special handling precautions. Properties and reactivity:

Typical reactions of boranes are:

Boranes can act as ligands in coordination compounds. Boranes can react to form hetero-boranes (e.g., carboranes or metalloboranes), clusters that contain boron and metal atoms.