Lumen can help! Review our up-to-date Boundless Chemistry by clicking the link below. From there, you can request a demo and review the course materials in your Learning Management System (LMS).

Heterogeneous catalysis is a type of catalysis in which the catalyst occupies a different phase than the reaction mixture.

Classify catalysts as either heterogeneous or homogeneous

Catalysts are chemical compounds that increase the rate of a reaction by lowering the activation energy required to reach the transition state. Unlike reactants, a catalyst is not consumed as part of the reaction process. The process of speeding up a reaction by using a catalyst is known as catalysis.

Adsorption of ethene on a solid catalyst surface: The catalyst aligns the ethene molecule with hydrogen, allowing the two to react more efficiently than if they were simply combined in a container, and were colliding at random.

Generally, heterogeneous catalysts are solid compounds that are added to liquid or gas reaction mixtures. The reason such catalysts are able to speed up a reaction has to do with collision theory. Recall that according to collision theory, reactant molecules must collide with proper orientation. A catalyst essentially acts like a “traffic cop,” aligning molecules in just the right way so that it’s easier for them to combine and react.

Advantages and Disadvantages of Heterogeneous Catalysis

Homogeneous catalysis is a class of catalysis in which the catalyst occupies the same phase as the reactants.

Catalysts are compounds that, when added to chemical reactions, reduce the activation energy and increase the reaction rate. The amount of a catalyst does not change during a reaction, as it is not consumed as part of the reaction process. Catalysts lower the energy required to reach the transition state of the reaction, allowing more molecular interactions to achieve that state. However, catalysts do not affect the degree to which a reaction progresses. In other words, though catalysts affect reaction kinetics, the equilibrium state remains unaffected. 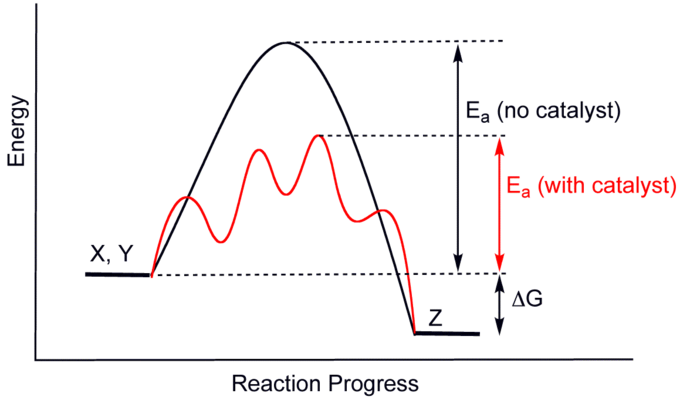 Catalysis: Note the lowered activation energy of the catalyzed pathway.

Homogeneous catalysts are used in variety of industrial applications, as they allow for an increase in reaction rate without an increase in temperature.

Interactive: Catalysis: The model contains reactants which will form the reaction: A₂ + B₂ –> 2 AB. In this case the model has been set so the activation energy is high. Try running the reaction with and without a catalyst to see the effect catalysts have on chemical reactions. 1. Run the model to observe what happens without a catalyst. 2. Pause the model. 3. Add a few (3 – 4) catalyst atoms to the container by clicking the button. 4. Run the model again, and observe how the catalyst affects the reaction.

Enzymes are proteins that accelerate biochemical transformations by lowering the activation energy of reactions.

Synthetic catalysts are used to accelerate a variety of industrial processes and are crucial to the chemical manufacturing industry. However, catalysts are also found in nature in the form of enzymes. Enzymes are proteins that are able to lower the activation energy for various biochemical reactions. They do this by binding the reactant(s), known as the substrate(s), to an active site within the enzyme. At the active site, the substrate(s) can form an activated complex at lower energy. Once the reaction completes, the product(s) leaves the active site, so the enzyme is free to catalyze more reactions.

Enzyme catalysis: An enzyme catalyzes a biochemical reaction by binding a substrate at the active site. After the reaction has proceeded, the products are released and the enzyme can catalyze further reactions.

One model of enzyme mechanism is called the induced fit model. This model proposes that the binding of the reactant, or substrate, to the enzyme active site results in a conformational change to the enzyme. This change stabilizes the transition state complex, and thus lowers the activation energy.

Enzymes can catalyze reactions through a variety of mechanisms. Some of these include:

As such, enzymes show that evolutionary biology has produced highly effective catalysts.