The three states of matter are the distinct physical forms that matter can take: solid, liquid, and gas.

Describe the three states of matter

The three states of matter are the three distinct physical forms that matter can take in most environments: solid, liquid, and gas. In extreme environments, other states may be present, such as plasma, Bose-Einstein condensates, and neutron stars. Further states, such as quark-gluon plasmas, are also believed to be possible. Much of the atomic matter of the universe is hot plasma in the form of rarefied interstellar medium and dense stars.

The states of matter: This diagram shows the nomenclature for the different phase transitions.

A solid’s particles are packed closely together. The forces between the particles are strong enough that the particles cannot move freely; they can only vibrate. As a result, a solid has a stable, definite shape and a definite volume. Solids can only change shape under force, as when broken or cut.

In crystalline solids, particles are packed in a regularly ordered, repeating pattern. There are many different crystal structures, and the same substance can have more than one structure. For example, iron has a body-centered cubic structure at temperatures below 912 °C and a face-centered cubic structure between 912 and 1394 °C. Ice has fifteen known crystal structures, each of which exists at a different temperature and pressure.

A liquid is a fluid that conforms to the shape of its container but that retains a nearly constant volume independent of pressure. The volume is definite (does not change) if the temperature and pressure are constant. When a solid is heated above its melting point, it becomes liquid because the pressure is higher than the triple point of the substance. Intermolecular (or interatomic or interionic) forces are still important, but the molecules have enough energy to move around, which makes the structure mobile. This means that a liquid is not definite in shape but rather conforms to the shape of its container. Its volume is usually greater than that of its corresponding solid (water is a well-known exception to this rule). The highest temperature at which a particular liquid can exist is called its critical temperature.

A liquid can be converted to a gas through heating at constant pressure to the substance’s boiling point or through reduction of pressure at constant temperature. This process of a liquid changing to a gas is called evaporation.

Gas molecules have either very weak bonds or no bonds at all, so they can move freely and quickly. Because of this, not only will a gas conform to the shape of its container, it will also expand to completely fill the container. Gas molecules have enough kinetic energy that the effect of intermolecular forces is small (or zero, for an ideal gas), and they are spaced very far apart from each other; the typical distance between neighboring molecules is much greater than the size of the molecules themselves.

A supercritical fluid (SCF) is a gas whose temperature and pressure are greater than the critical temperature and critical pressure. In this state, the distinction between liquid and gas disappears. A supercritical fluid has the physical properties of a gas, but its high density lends it the properties of a solvent in some cases. This can be useful in several applications. For example, supercritical carbon dioxide is used to extract caffeine in the manufacturing of decaffeinated coffee.

Phase Changes: What does a phase change look like at the molecular level? This video takes a look at the molecular structure of solids, liquids, and gases and examines how the kinetic energy of the particles changes. The video also discusses melting, vaporization, condensation, and freezing.

In chemistry, a chemical substance is a form of matter that has constant chemical composition and characteristic properties. It cannot be separated into components without breaking chemical bonds. Chemical substances can be solids, liquids, gases, or plasma. Changes in temperature or pressure can cause substances to shift between the different phases of matter.

An element is a chemical substance that is made up of a particular kind of atom and hence cannot be broken down or transformed by a chemical reaction into a different element. All atoms of an element have the same number of protons, though they may have different numbers of neutrons and electrons.

A mixture is a material system made up of two or more different substances, which are mixed but not combined chemically. A mixture refers to the physical combination of two or more substances in which the identities of the individual substances are retained. Mixtures take the form of alloys, solutions, suspensions, and colloids. 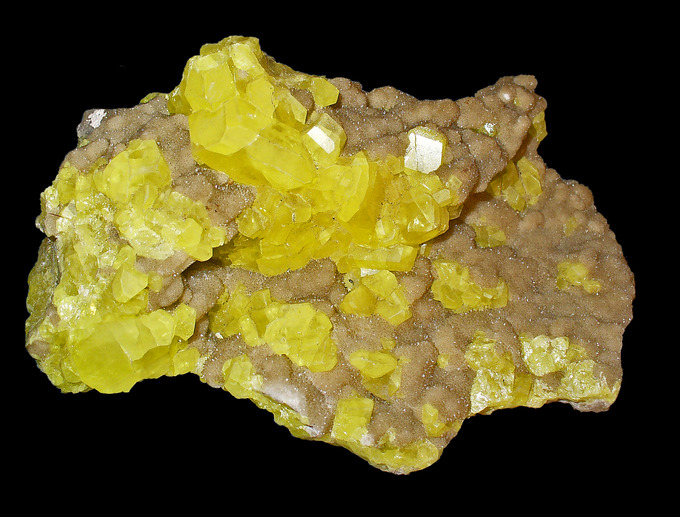 Naturally occurring sulfur crystals: Sulfur occurs naturally as elemental sulfur, sulfide, and sulfate minerals and in hydrogen sulfide. This mineral deposit is composed of a mixture of substances.

A heterogeneous mixture is a mixture of two or more chemical substances (elements or compounds), where the different components can be visually distinguished and easily separated by physical means. Examples include:

Interactive: Oil and Water: Explore the interactions that cause water and oil to separate from a mixture.

Distinguishing between homogeneous and heterogeneous mixtures is a matter of the scale of sampling. On a small enough scale, any mixture can be said to be heterogeneous, because a sample could be as small as a single molecule. In practical terms, if the property of interest is the same regardless of how much of the mixture is taken, the mixture is homogeneous.

A mixture’s physical properties, such as its melting point, may differ from those of its individual components. Some mixtures can be separated into their components by physical (mechanical or thermal) means.

Classifying Matter (3 parts): Introduction to classifying matter as a substance or a mixture of substances. Mixtures are described as heterogeneous or homogeneous. Three common methods of separation are described.

An element is a material that consists of a single type of atom, while a compound consists of two or more types of atoms.

Differentiate between elements and compounds and explore separation techniques

A chemical element is a pure substance that consists of one type of atom. Each atom has an atomic number, which represents the number of protons that are in the nucleus of a single atom of that element. The periodic table of elements is ordered by ascending atomic number.

The chemical elements are divided into the metals, the metalloids, and the non-metals. Metals, typically found on the left side of the periodic table, are:

In contrast, non-metals, found on the right side of the periodic table (to the right of the staircase), are:

Examples of elemental non-metals include carbon and oxygen.

As of November, 2011, 118 elements have been identified (the most recently identified was ununseptium, in 2010). Of these 118 known elements, only the first 98 are known to occur naturally on Earth. The elements that do not occur naturally on Earth are the synthetic products of man-made nuclear reactions. 80 of the 98 naturally-occurring elements are stable; the rest are radioactive, which means they decay into lighter elements over timescales ranging from fractions of a second to billions of years.

Pure samples of isolated elements are uncommon in nature. While the 98 naturally occurring elements have all been identified in mineral samples from the Earth’s crust, only a small minority of them can be found as recognizable, relatively pure minerals. Among the more common of such “native elements” are copper, silver, gold, and sulfur. Carbon is also commonly found in the form of coal, graphite, and diamonds. The noble gases (e.g., neon) and noble metals (e.g., mercury) can also be found in their pure, non-bonded forms in nature. Still, most of these elements are found in mixtures.

Pure chemical elements are not considered chemical compounds, even if they consist of diatomic or polyatomic molecules (molecules that contain only multiple atoms of a single element, such as H2 or S8).