Calculate the oxidation state of a metal in a coordination compound.

Example: What is the oxidation number of C2H6 ?

The oxidation number in coordination chemistry has a slightly different meaning. Transition metals are the elements in Groups 3 to 12 representing the d block of the periodic table. Due to the relatively low reactivity of unpaired d electrons, these metals typically form several oxidation states and therefore can have several oxidation numbers. Unfortunately, there is no simple rule to determining oxidation state possibilities among the transition metals, so it is best simply to memorize the common states of each element.

Example 1: An oxide of chromium has the formula Cr2O3. What is the oxidation number of each chromium ion?

Solution: The oxidation number of oxygen is assigned a charge of -2 when it reacts with a metal because the metal is more electropositive. The total charge of the oxygens is -6. Since the compound is neutral, the charge of each chromium must be +3 because 2(3)+3(-2) = 0.

Example 2: Another compound has the formula K2CrO4. What is the oxidation number of chromium?

The maximum oxidation number in the first row of transition metals is equal to the number of valence electrons from scandium (+3) up to manganese (+7). However, it decreases in the latter elements. In the second and third rows, the maximum oxidation number is that of ruthenium and osmium (+8). In compounds such as (MnO4)− and OsO4, the elements achieve a stable octet by forming four covalent bonds.

Transition-metal and coordination compounds are named using a set of rules that describe oxidation numbers and anion and cation composition.

Identify the proper name for a coordination complex given its molecular formula.

The procedure for naming ionic compounds containing polyatomic ions is the same as that for naming simple ions. Thus, CaCO3 is named calcium carbonate; (NH4)2HPO4, a compound with two polyatomic ions, is named ammonium hydrogen phosphate; and Pb2+ paired with SO42- (PbSO4) is named lead(II) sulfate.

Example 1: Write a correct chemical formula for each of the following ionic compounds: a. Aluminum oxide; b. Copper (II) chloride; c. Iron(III) oxide.

Example 2: Write the proper chemical name for each of the following ionic compounds: a. Li2S; b. NiCl2; c. FeO.

More complicated coordination compounds are composed of an atom or ion (usually a metal) and a surrounding array of bound molecules or anions, known as ligands. The atom within a ligand that is bonded to the central atom or ion is called the donor atom. A typical complex is bound to several donor atoms, which can be the same or different. Coordination refers to the coordinate covalent bonds (dipolar bonds) between the ligands and the central atom. 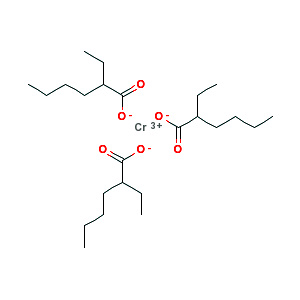 The set of rules for naming a coordination compound is:

Write a proper chemical name for each of the following coordination compounds:

a. Tetrachloridonickelate(II) ion. The complex ion, an anion, is inside the parentheses. We have to add the suffix -ate in the name of the metal.

b. Diamminetetrachloroplatinum(IV). This is a neutral molecule. The total charge on the ligands is -4. Therefore, the platinum oxidation number is +4.

c. Diamminedichloroplatinum(II) chloride. Here, the number of ions and atoms are the same. However, the brackets as well as the different oxidation number of the platinum result in a very different name.

The coordination number of ligands attached to more than one metal (bridging ligands) is indicated by a subscript to the Greek symbol μ placed before the ligand name. Thus the dimer of aluminum trichloride is described by Al2Cl4(μ2-Cl)2.

Explain the effect of isomerization on the properties of a coordination complex.

As with other compounds, there are several kinds of coordination complex isomers. Stereoisomers occur when the ligands have the same bonds, but the bonds are in different orientations relative to one another. Structural isomerism occurs when the bonds are different. Isomers are distinct compounds that can have different physical properties such as color, crystal structure, and melting point.

In octahedral complexes—with four of one ligand and two of another—and square planar complexes—with two of one ligand and two of another—there are two different arrangements of the same atoms with the same bonds. These different arrangements are called cis and trans. In cis molecules, the two ligands are on the same side of the complex. This means that in both octahedral and square planar complexes the bond angle between the two similar ligands will be 90 degrees. In trans molecules, the similar ligands are on the opposite sides of the molecules, meaning the bond angle is 180 degrees. Tetrahedral molecules do not show stereoisomerism.

An example of cis and trans isomers can be seen for platin. Cisplatin is used as an anti-cancer drug because it can bind to the DNA of rapidly growing cells and prevent replication. The trans form of this chemical is not as effective at binding to the DNA. 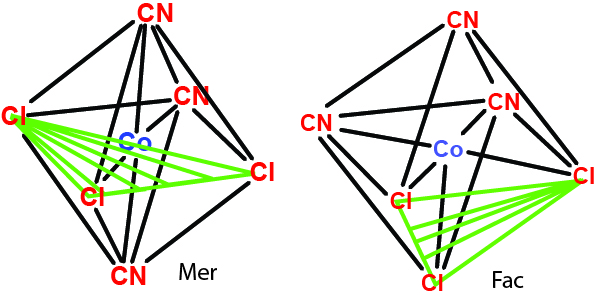 Optical isomerism occurs when a molecule is not superimposable with its mirror image. If you shine light through pure solutions of each optical isomer they would rotate the plane of polarized light in opposite directions. The symbol Λ (lambda) is used as a prefix to describe the left-handed propeller twist formed by three bidentate ligands. The symbol Δ (delta) is used as a prefix for the right-handed propeller twist. 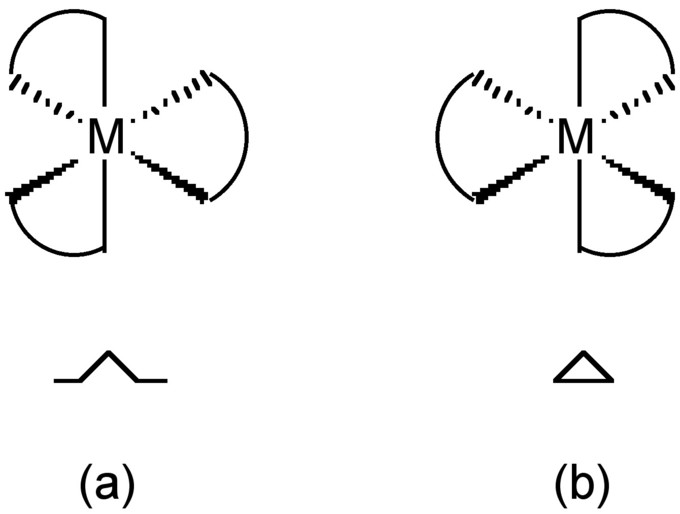 There are four types of structural isomerism:

The coordination number determines the number of ligands attached to the central ion and the overall shape of the complex.

In coordination chemistry, a ligand is an ion or molecule (functional group) that binds to a central metal atom to form a coordination complex. Virtually every molecule and every ion can serve as a ligand for (or coordinate to) metals. Denticity refers to the number of times a ligand bonds to a metal through donor atoms. Many ligands are capable of binding metal ions through multiple sites, usually because the ligands have lone pairs on more than one atom.

Monodentate ligands include virtually all anions and all simple Lewis bases. Thus, the halides and pseudohalides are important anionic ligands. Ammonia, carbon monoxide, and water are particularly common charge-neutral ligands. Simple organic species are also very common. All unsaturated molecules are also ligands, utilizing their π-electrons in forming the coordinate bond. Also, metals can bind to the σ bonds in, for example, silanes, hydrocarbons, and dihydrogen.

Ligands that bind via more than one atom are often termed polydentate or chelating. A ligand that binds through two sites is classified as bidentate, and three sites as tridentate. Chelating ligands are commonly formed by linking donor groups via organic linkers. A classic bidentate ligand is ethylenediamine, which is derived by the linking of two ammonia groups with an ethylene (-CH2CH2-) linker. A classic example of a polydentate ligand is the hexadentate chelating agent EDTA, which is able to bond through six sites, completely surrounding some metals.

Different ligand structural arrangements result from the coordination number. Most structures follow the pattern as if the central atom were in the middle and the corners of that shape are the locations of the ligands. These shapes are defined by orbital overlap between ligand and metal orbitals and ligand-ligand repulsions, which tend to lead to certain regular geometries. However, there are many cases that deviate from regular geometry. For example, ligands of different sizes and with different electronic effects often result in irregular bond lengths. 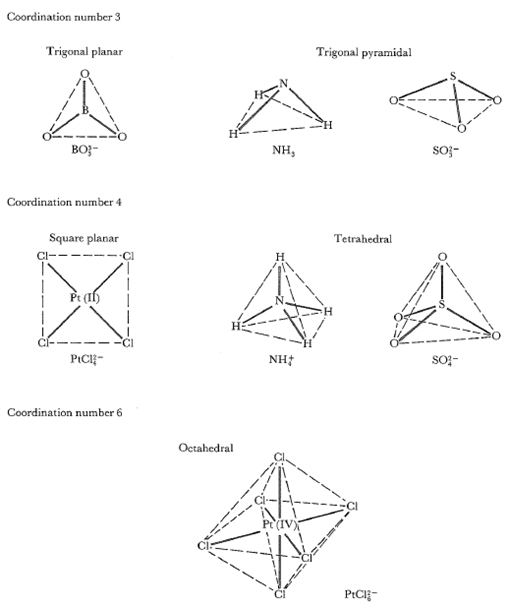