Deviation of Gas from Ideal Behavior

The Effect of the Finite Volume

Real gases deviate from the ideal gas law due to the finite volume occupied by individual gas particles.

Demonstrate an understanding of the van der Waals equation for non-ideal gases.

The ideal gas law is commonly used to model the behavior of gas-phase reactions. Ideal gases are assumed to be composed of point masses whose interactions are restricted to perfectly elastic collisions; in other words, a gas particles’ volume is considered negligible compared to the container’s total volume.

Gas particles: Ideal gases are assumed to be composed of point masses that interact via elastic collisions.

There are two notable situations in which the behavior of real gases deviates from that model:

The particles of a real gas do, in fact, occupy a finite, measurable volume. At high pressures, the deviation from ideal behavior occurs because the finite volume that the gas molecules occupy is significant compared to the total volume of the container. The van der Waals equation modifies the ideal gas law to correct for this excluded volume, and is written as follows:

The available volume is now represented as [latex]V - nb[/latex], where b is a constant that is specific to each gas. In this approximation, the gas molecules are considered hard spheres with a defined radius (r) that cannot overlap with the radius of a neighboring particle. The constant b is defined as:

where NA is Avogadro’s number and r is the radius of the molecule.

It is important to note that this equation applies to ideal gases as well. It can be simplified because in an ideal situation, the value of b is so much smaller than V that it does not make a measurable difference in the calculation.

Translational motion of helium: Under certain conditions, such as high pressure, real gases do not always behave according to the ideal model. Here, the size of helium atoms relative to their spacing is shown to scale under 1,950 atmospheres of pressure.

The Effect of Intermolecular Forces

At high pressures and low temperatures, intermolecular forces between gas particles can cause significant deviation from ideal behavior.

The Ideal Gas Law is a convenient approximation for predicting the behavior of gases at low pressures and high temperatures. This equation assumes that gas molecules interact with their neighbors solely through perfectly elastic collisions, and that particles exert no intermolecular forces upon each other.

Intermolecular forces describe the attraction and repulsion between particles. They include:

The contribution of intermolecular forces creates deviations from ideal behavior at high pressures and low temperatures, and when the gas particles’ weight becomes significant.

Intermolecular Forces and the Limitations of the Ideal Gas Law

Correcting for the Intermolecular Forces of Real Gases

In the term above, a is a constant specific to each gas and V is the volume. van der Waals also corrected the volume term by subtracting out the excluded volume of the gas. The full van der Waals equation of state is written as:

where b is the excluded volume of the gas, R is the universal gas constant, and T is the absolute temperature.

Interactive: Charged and Neutral Atoms: Explore the role of charge in interatomic interactions.

The van der Waals equation modifies the Ideal Gas Law to correct for the excluded volume of gas particles and intermolecular attractions.

Derived by Johannes Diderik van der Waals in 1873, the van der Waals equation modifies the Ideal Gas Law; it predicts the properties of real gases by describing particles of non-zero volume governed by pairwise attractive forces. This equation of state is presented as:

where P is the pressure, V is the volume, R is the universal gas constant, and T is the absolute temperature. Isotherm (plots of pressure versus volume at constant temperature) can be produced using the van der Waals model. 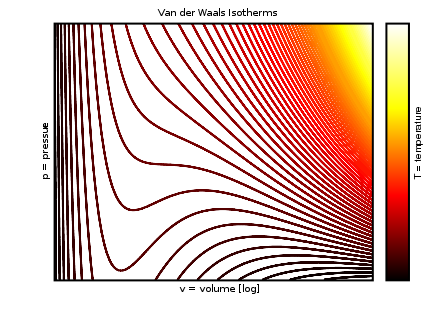 van der Waals isotherms: This graph demonstrates the relationship between pressure, volume, and temperature based on the van der Waals model. It correctly predicts a mostly incompressible liquid phase, but the oscillations in the phase transition zone do not fit experimental data.

The constants a and b have positive values and are specific to each gas. The term involving the constant a corrects for intermolecular attraction. Attractive forces between molecules decrease the pressure of a real gas, slowing the molecules and reducing collisions with the walls.

Equations other than the Ideal Gas Law model the non-ideal behavior of real gases at high pressures and low temperatures.

Isotherms and the P-V Diagram

The Ideal Gas Law assumes that a gas is composed of randomly moving, non-interacting point particles. This law sufficiently approximates gas behavior in many calculations; real gases exhibit complex behaviors that deviate from the ideal model, however, as shown by the isotherms in the graph below. (Isotherms refer to the different curves on the graph, which represent a gas’ state at different pressure and volume conditions but at constant temperature; “Iso-” means same and “-therm” means temperature—hence isotherm.)

Limitations of the Ideal Model

For most applications, the ideal gas approximation is reasonably accurate; the ideal gas model tends to fail at lower temperatures and higher pressures, however, when intermolecular forces and the excluded volume of gas particles become significant. The model also fails for most heavy gases (including many refrigerants) and for gases with strong intermolecular forces (such as water vapor). At a certain point of combined low temperature and high pressure, real gases undergo a phase transition from the gaseous state into the liquid or solid state. The ideal gas model, however, does not describe or allow for phase transitions; these must be modeled by more complex equations of state.

Real-gas models must be used near the condensation point of gases (the temperature at which gases begin to form liquid droplets), near critical points, at very high pressures, and in other less common cases. Several different models mathematically describe real gases.

Real gases are often modeled by taking into account their molar weight and volume:

Note that a and b here are defined differently than in the van der Waals equation.

Additional models that can be applied to non-ideal gases include the the Berthelot model, the Dieterici model, the Clausius model, the Virial model, the Peng-Robinson model, the Wohl model, the Beattie-Bridgeman model, and the Benedict-Webb-Rubin model. However, these systems are used less frequently than are the van der Waals and Redlich-Kwong models.

Compressibility Factor and Deviation from Ideality

Deviation from ideality can be quantified using the compressibility factor Z:

Note that for an ideal gas, PV=nRT, and Z will equal 1; under non-ideal conditions, however, Z deviates from unity. The graph below depicts how the compressibility factor varies with increasing pressure for a generalized graph. Note that the isotherms representing high temperatures deviate less from ideal behavior (Z remains close to 1 across the graph), while for isotherms representing low temperatures, Z deviates greatly from unity.

Air pollution results from increasing levels of harmful molecules and particulates in the atmosphere.

Air pollution is the presence of harmful molecules or particulates, both natural and man-made, in the atmosphere.

Increases in these atmospheric molecules and particles result in: 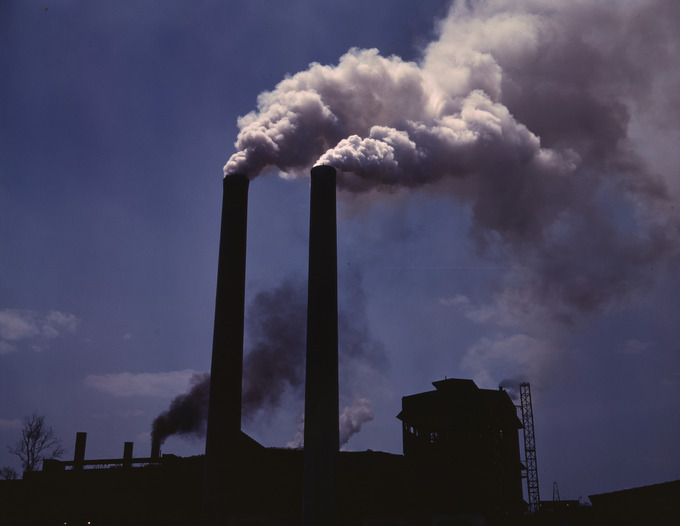 Air pollution: The output of industrial manufacturing processes is a major source of air pollution.

Major Pollutants and Their Effects

The main air pollutants produced by humans are:

Ozone’s Role in the Stratosphere

Ozone depletion describes two distinct but related phenomena observed since the late 1970s: (1) a steady decline of about 4 percent per decade in the total volume of ozone in Earth’s stratosphere (the ozone layer ); and (2) a much larger springtime decrease in stratospheric ozone over Earth’s polar regions. The latter phenomenon is referred to as the ozone hole. Both types of ozone depletion have increased as emissions of halo-carbons have increased. 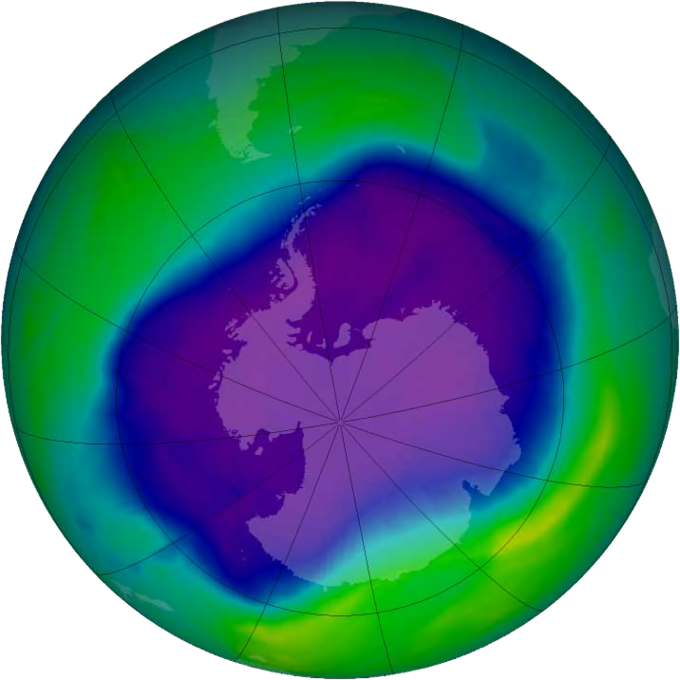 The most important process in hole formation is the catalytic destruction of ozone by atomic halogens. The main source of these halogen atoms in the stratosphere is photodissociation of man-made halocarbon refrigerants; examples include CFCs (chlorofluorocarbons), freons, and halons. These compounds are emitted on Earth’s surface and move into the stratosphere.

CFCs and other contributing substances are referred to as ozone-depleting substances (ODS). Since the ozone layer prevents most harmful wavelengths (280-315 nm) of ultraviolet (UV) light from passing through Earth’s atmosphere, observed and projected decreases in ozone have generated worldwide concern. The Montreal Protocol bans the production of ozone-depleting chemicals such as carbon tetrachloride and trichloroethane.

Because the ozone layer acts as a protectant, blocking most UVB wavelengths of UV light from piercing Earth’s atmosphere, ozone depletion may result in a variety of biological consequences; these include increased cases of skin cancer, cataracts, and plant damage, as well as reduced plankton populations in the ocean’s photic zone. The largest ozone hole was observed in September, 2006.

The balance of ozone production and degradation can be disturbed by the presence of competing free radicals, most notably the hydroxyl radical (OH·), nitric oxide radical (NO·), atomic chlorine radical (Cl·), and atomic bromine radical (Br·). The reaction of these free radicals with ozone disrupts the ozone-oxygen cycle, leading to the destruction of stratospheric ozone and the depletion of the ozone layer. The atomic chlorine and bromine radicals are found in certain stable organic compounds, especially CFCs, which can make their way to the stratosphere because of their low reactivity. Once in the stratosphere, ultraviolet light liberates the Cl and Br atoms from their parent compounds:

The Cl and Br atoms can then destroy ozone molecules through a variety of catalytic cycles. In the simplest example of such a cycle, a chlorine atom reacts with an ozone molecule, taking an oxygen atom (forming ClO, chlorine monoxide) and leaving a normal oxygen molecule (O2). The chlorine monoxide can then react with a second molecule of ozone (O3) to yield another chlorine atom and two molecules of oxygen. The chemical equations for these gas-phase reactions are:

Thus, the atomic chlorine radical regenerates; a single chlorine can keep destroying ozone (acting as a catalyst ) for up to two years. The overall effect is a decrease in the amount of ozone, though null cycles can decrease the rate of these processes. More complicated mechanisms that lead to ozone destruction in the lower stratosphere have also been been discovered.

A common misconception is that because CFC molecules are heavier than air (both nitrogen and oxygen), they cannot reach the stratosphere in significant amounts and therefore do not contribute significantly to ozone depletion. Atmospheric gases are not sorted by weight, however; wind forces can fully mix the gases in the atmosphere, which readily diffuse into the stratosphere.